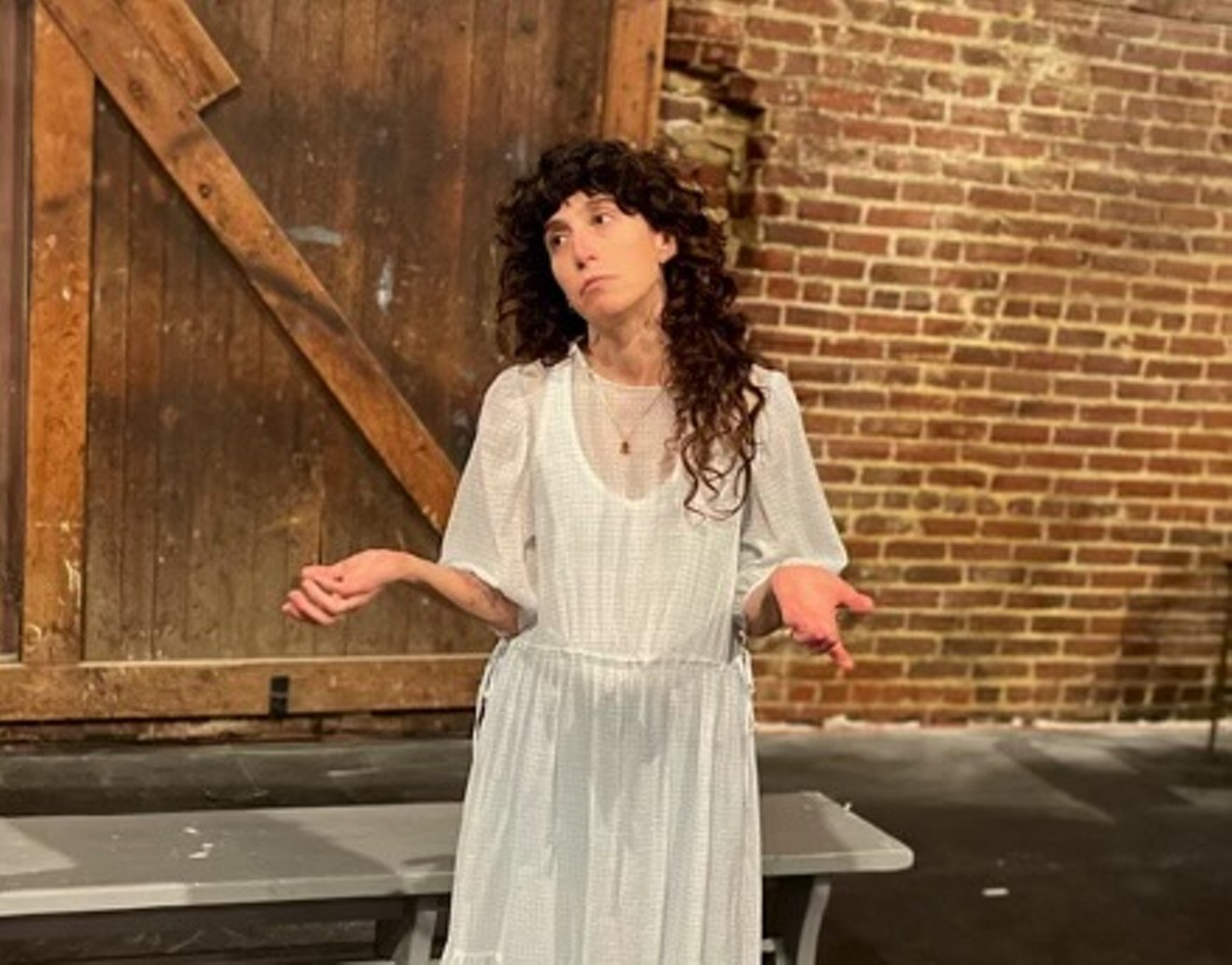 Meredith Young Marialuisa Meza-Burgos
In 2019, longtime Su Teatro patron Max Appel came to the theater to see Northside, Bobby LeFebre’s play about the gentrification of a Chicano neighborhood in Denver. It made him think about a story he’d spent years wanting to tell, and he wondered if Su Teatro just might be the place to do so.

Su Teatro, which is currently celebrating its fiftieth anniversary, is the third-oldest Chicano theater in the country. Over the years, its plays and musicals have focused on Chicano history and culture. Appel, however, grew up in West Colfax’s vibrant Jewish community in the 1930s, and he wanted to tell the story of that generation of Jewish Americans and their experience coming to Denver. “It was a place where people didn’t have anything before,” says Appel. “Their parents were in situations where they were abused. Everybody was poor, nobody was rich. And we made the most of it. But the Westside was a wonderful experience to be brought up in.”

Appel remembers how religion helped to knit the community together. On Wednesdays, neighbors would prepare for the Sabbath by getting carp from the fish market to make gefilte fish, a traditional Jewish dish. On the High Holy Days of Yom Kippur and Rosh Hashanah, everyone would gather together in their homes, the streets deserted. “When I was a child,” says Appel, “I stood on the hill on Hooker Street and looked over toward the mountains and said, ‘[There] is a wonderful opportunity in this country…it’s limitless.’” Left to right: Yolanda Ortega, Meredith Young, Alex Romberg and Natalie Fuentes.
Marialuisa Meza-Burgos
He shared the memory with Su Teatro’s executive artistic director, Anthony Garcia, when he approached the theater about a potential collaboration. But at first Garcia wasn’t sure if he was the right one to help bring this story to life. Should a Latino person tell this Jewish story?

As Garcia learned more about Denver’s Jewish immigrants, however, he realized they had more in common than he’d thought. “This idea of fitting and not fitting and having to create an environment where you could survive, you could support each other, you could nurture each other,” says Garcia, “and then a desire to really want to contribute to this country that had accepted them — the contradictions and that dynamic was something I related to.”

In the 1910s, Mexicans fleeing the Mexican Revolution immigrated to the United States. At the same time, Jews in Eastern Europe were also leaving their homes to escape the violent anti-Jewish riots known as the pogroms. And once they moved to Denver, their communities weren’t that far apart.

“I grew up in the Auraria neighborhood,” says Garcia. “Going west, you had those place[s] along the river there, and that was called the Bottoms. And all of our communities kind of moved up that hill, so looking from Hooker Street over the city. So we called [the play] Promise on the Hill.”

The musical, Promise on the Hill: A West Colfax Memory, is loosely based on Appel’s journey, starting with his childhood on the Westside, driving from place to place with his father in a cattle truck.

“I’d put my head down so nobody would see me,” he remembers. “I thought, ‘Gee, I'm superior because I'm going to school, and he could never learn to read and write.’ But in retrospect, I should have applauded him for what he did to make a living in a new country and learn the language.

“I think [the play] is a celebration of the American dream,” he continues. “[The parents] always wanted their children to have a better life than they had, and that's what they really worked at.”

And that’s exactly what happened for many in the community.

“The department stores downtown were Neusteters…Gart Brothers were the sporting goods…those real prominent names here, they all came out of that community,” says Garcia. “I never made that connection [before].”

Others became successful lawyers, educators, civic leaders and doctors. In 1904, the Jewish Consumptives' Relief Society (JCRS) was established on the Westside to treat people with tuberculosis.

Despite all the success stories, however, it wasn’t always easy. Appel doesn’t remember anti-Semitism growing up because he lived in an all-Jewish community, but the outside world was different.

“There was this restriction put on Jews going into hospitals for a while, and country clubs, so they formed their own,” says Appel.

“There’s a line in the play [in which] they talk about, ‘Don’t get even, get better,’” adds Garcia.

Appel himself is a philanthropist and entrepreneur, and is perhaps best known as the creator of OxiClean and — in Denver, at least — as one of the new co-owners of Zaidy’s Deli & Bakery. He got his start, though, selling carpet sweepers at home and garden shows. Lorenzo Gonzales and Meredith Young.
Marialuisa Meza-Burgos
“[Appel] was generous enough to allow us to explore some of his experiences [for the play],” says Garcia. “It’s not representative of everybody — it’s only one story — but it does give us a picture.”

When Garcia and Appel took a drive around the Westside to see how it’s changed, few vestiges remained of the community Appel had known as a child. “Where we used to have a house, there’s a McDonald’s now,” he says.

“When Colfax became a highway, then people would just zoom back and forth, and nobody really had to stop anymore,” notes Garcia. While a lot of the Orthodox community still lives on the Westside, “each generation just gets further and further away,” he adds.

Garcia hopes that this play will not only resonate with people of Appel’s generation who grew up there, but also with their children and grandchildren.

“Gentrification has a way of erasing our memories,” says Garcia. “It’s such a tragedy.”

While this play doesn’t touch on the overlapping experiences of the Jewish-American and Mexican-American communities, Garcia thinks the similarities are hard to miss, especially since the two groups grew up alongside each other.

“We really embrace the idea that we're a local theater company,” says Garcia. “The stories that we're telling are about our communities here. We did [The] Gospel at Colonus, which is an African-American piece, and now we're producing this. … We see ourselves as a place where culture comes together.”

The production includes traditional Jewish music as well as original songs written by Garcia, and two of the cast members are Appel’s grandchildren.

“The kids are one of the funnest parts of the whole piece,” says Garcia. He also notes that “Max [Appel] is a fascinating storyteller. Without giving you too [many] spoilers, there’s stories that Max tells, and when you see them on stage, they’re even wilder.”

Phil Luna
Marialuisa Meza-Burgos
Promise on the Hill: A West Colfax Memory, written by Garcia and Appel, opens on Thursday, September 22, for a limited three-day run, but Garcia says it will come back for a longer engagement next July.

“Tony has done a wonderful job of putting the color into this, what it was really like to be born here and what a wonderful experience it has been for everybody,” says Appel.

“It’s not a definitive story; it's a beginning of a conversation,” says Garcia. “It’s really about us trying to capture and honor the contributions of that generation and really understand Denver as so much of Denver is being torn down and being rebuilt. So much of our memory exists in those buildings and in those spaces, and without that memory, we lose a connection with our ancestors.”

Promise on the Hill: A West Colfax Memory, Su Teatro Cultural and Performing Arts Center, 721 Santa Fe Drive, 7:30 p.m. Thursday, September 22, through Saturday, September 24. General admission tickets are $20.
KEEP WESTWORD FREE... Since we started Westword, it has been defined as the free, independent voice of Denver, and we'd like to keep it that way. With local media under siege, it's more important than ever for us to rally support behind funding our local journalism. You can help by participating in our "I Support" program, allowing us to keep offering readers access to our incisive coverage of local news, food and culture with no paywalls.
Make a one-time donation today for as little as $1.