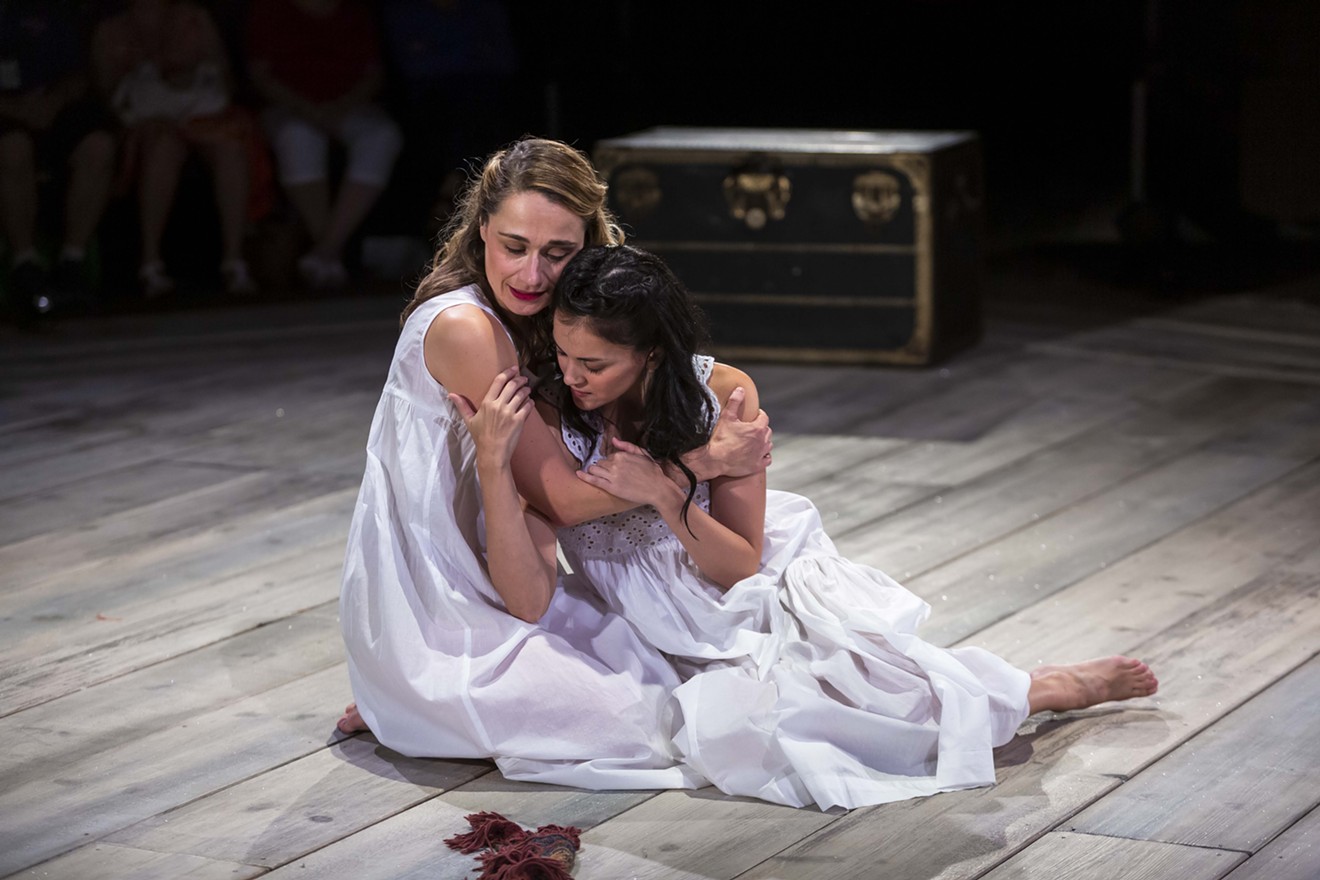 Lianne Marie Dobbs (Halina/Manke), left; Andrea Goss (Chana/Rifkele) Photo by Adams VisCom
Paula Vogel’s Indecent, now in a regional premiere at the Denver Center for the Performing Arts, covers a lot of ground and raises many issues. At the core is a play, God of Vengeance, written by Polish writer Sholem Asch in 1906, about a Jewish brothel owner desperate to be seen as respectable and also to clear himself in the eyes of God. He plans to achieve these things through a respectable marriage for his daughter, seventeen-year-old Rifkele, and the acquisition of a Torah. His plans are ruined when Rifkele falls in love with Manke, one of the prostitutes.

In Indecent, we see a first reading of God of Vengeance in a Polish living room, where the readers’ strong disagreements about the play’s merits foreshadow public strife to come. One reader fears the depiction of a Jewish brothel and the lesbian affair will stir anti-Semitism; another, Lemml, a good-hearted everyman figure, falls in love with the script. Encouraged by his wife, Asch takes God of Vengeance to Berlin, where it’s a success. From there, it tours Europe to general acclaim, and eventually comes to New York’s Yiddish theater district on the Lower East Side.

An English translation, softened and somewhat distorted, opens on Broadway in 1923 and fans the flames of controversy higher. Influential Jews, hyper-aware of growing anti-immigrant and anti-Semitic sentiment in the country, protest the play, and producer and cast are arrested. Though the aftermath isn’t covered in Indecent, the run resumed almost immediately, the penalties were nugatory, and the case was ultimately dismissed on appeal.

Indecent has a rhythm and a kind of lightness I associate with Vogel, whose work tends to dance even when her themes are profoundly serious. There’s actual music by Lisa Gutkin and Aaron Halva in this play — klezmer and imported touches from such outside sources as the musical Oklahoma! and the I Am a Camera theme, along with dance choreographed by Dominique Kelley. We get a snatch of Berlin nightclub now and then (hello, Marlene Dietrich). The actors play instruments, and there’s the Brechtian device of signs telling us where we are, translating from Hebrew or explaining a cesura in the action with the words “a blink in time.” Under Nancy Keystone’s direction, the staging is complex and intriguing.

There are many currents swirling beneath and around the main plot. Which is a good thing, because as the direct quotations used in Indecent reveal, God of Vengeance, despite the wonderfully thunderous title and the fact that it was revelatory in its time, is a bit of a thunker. Yet Indecent lauds the greatness and importance of Asch’s work, and pure-hearted Lemml defends it staunchly against all attack. Vogel has said in interviews that she read the play as a student, and found herself inspired and exhilarated by the love between Rifkele and Manke, which introduces a shimmering, redemptive theme into the murky world of the brothel. The women’s nighttime encounter in warm spring rain becomes a central image in Indecent; at its core, the play is an homage to the power of both art and love.

Seven actors play forty roles, and since Vogel, who won a Pulitzer Prize for How I Learned to Drive, tends to express her ideas in metaphor and image, her characters — with the exception of Lemml, in a touching performance by John Plumpis, and Zal Owen’s interesting Asch — aren’t given much contour or depth in the script. Still, Lianne Marie Dobbs and Andrea Goss give beautiful performances as Manke and Rifkele, respectively.

Those underlying currents are powerful. Watching, I found my mind filled with images and ideas about the Jewish experience: the immigrants who fled the pogroms in Europe in the late nineteenth and early twentieth centuries, the culture of the Lower East Side, the sad history of this country’s meager response to the desperation of European Jews during World War II. As those strains from Oklahoma! filled the theater, I couldn’t help thinking about the deep Jewish contribution to U.S. culture, from Bernstein to Sondheim, Gershwin to Garfunkel, Jerome Robbins to Richard Rodgers and Phillip Roth. And, of course, Vogel herself.

Before the production opened, I'd asked whether many of the cast members are Jewish, and received no clear response. Later, however, artistic director Chris Coleman told me that both the director and several of the actors are Jewish, which is good. While I’m not a stickler about the necessity for casting only Jewish actors in Jewish roles, a strong Jewish presence does seem crucial to fulfill the vision here.

You know that the Holocaust will pretty much have to play a part in a work so centered on Judaism, and it definitely does here. On a return to Europe, Asch visits Vilna, and is profoundly shaken by what he sees. The later horrors of WWII weigh heavily on him, affecting his entire life as a writer.

In 1938 — somewhat inexplicably — Lemml returns to Poland and is imprisoned in the Lodz ghetto, with thousands of others who are dying of hunger, cold and disease. This seems a reasonable creative leap, since God of Vengeance was in fact performed secretly in an attic in Lodz. Still, I couldn’t help feeling a sense of unbalance. The persistence of art in the worst and most degraded circumstances is a deeply resonant theme, and yet somehow Asch’s creaky play and the indignities suffered by his Broadway cast start to seem trivial given the implications of act two. It’s not convincing when Lemml and the actors form the line you know will take them to Auschwitz. And the metaphorical freeing of Rifkele and Manke to pursue their love in some sacred and eternal dimension feels too light. I wanted to be moved by it — by the ashes falling from the performers’ clothes, by the ring of ashes circling the playing area — but I wasn’t.

The stench of Auschwitz is simply too strong, intractable and indescribable to justify a lyrical ending.

Indecent, presented by the Denver Center for the Performing Arts Theatre Company through October 6, Space Theatre, Denver Performing Arts Complex, 303-893-4100, denvercenter.org.
KEEP WESTWORD FREE... Since we started Westword, it has been defined as the free, independent voice of Denver, and we'd like to keep it that way. With local media under siege, it's more important than ever for us to rally support behind funding our local journalism. You can help by participating in our "I Support" program, allowing us to keep offering readers access to our incisive coverage of local news, food and culture with no paywalls.
Make a one-time donation today for as little as $1.