Kathleen Traylor
Courtesy Kathleen Traylor
Kathleen Traylor knew that she wanted to act when she was a teen, but her therapist told her that goal was unrealistic. Traylor was born with amniotic band syndrome, which is caused by damage to the mother’s amniotic sac; when she was nine months old, her left leg was amputated, and many experimental surgeries followed on her right leg, which was finally amputated when she was sixteen. The therapist pointed out that theaters weren’t built to be accessible, directors didn’t visualize using actors in wheelchairs, and Traylor’s participation could present a danger for other actors on stage. “She finally convinced me to give it up,” says Traylor.

But Traylor didn’t give up altogether. She performed in plays at Thomas Jefferson High School, and remembers talking about the experience with school friends. “Here was a place where we could safely discover buried talents, release self-made barriers we'd erected for ourselves and tell people, ‘Look at me!’” she recalls. “We could take on lives many of us never imagined with the characters we played. And it was all accessible at the school. Could we develop a theater like that for the community?”

In 1989, Traylor, Teri Westerman Wagner, Gregg Vigil, Kevin Ahl and Rick Britton created Phamaly Theatre Company, an organization run by artists with disabilities, starting with a $3,000 grant from what was then the Colorado Council on the Arts (now Colorado Creative Industries). On July 25, all five Phamaly founders will receive a collective Lifetime Achievement Award at the Colorado Theatre Guild’s annual Henry Awards ceremony; the group is also honoring Lucy M. Walker, who founded EDEN Theatrical Workshop in 1963.

In the beginning, only a handful of people were involved with Phamaly, but they got busy holding fundraisers and asking for volunteers, and presented their first production — Guys and Dolls — in 1990 in the Boettcher School auditorium. Skilled cosmeticians from Denver’s Barbizon came in to do the cast’s hair and makeup. And “Greg Moody did a piece about us on the news,” Traylor says. “Our first review.”

After a performance of Oklahoma! at the Fox Theatre, Phamaly received a call from the Denver Center for the Performing Arts, inviting them to perform on the center’s Space Theatre stage. In 1992, they mounted Anything Goes there. A creatively exciting partnership followed until construction closed the Space in 2017, with the DCPA providing not only an annual summer venue, but technical support: lighting, sets with necessary ramps, and costumes designed to swirl around the edges of wheelchairs as the occupants danced.

Over the years, in a variety of spaces, the troupe has put on lively full-scale musicals as well as smaller productions, some funny, some intensely serious. All have featured stellar talents. 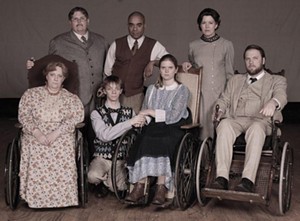 Cast of Our Town, top row from left: Mark Dissette, Leonard Barrett, Lucy Roucis. Lower row: Kathleen Traylor, Daniel Traylor, Regan Linton and Jason Dorwart.
Courtesy Phamaly
Regan Linton played several dazzling roles — from a powerful Dulcinea in Don Quixote to a crazily comic Lefou in Beauty and the Beast — before leaving to pursue a master of fine arts program at the University of California, San Diego. She returned six years ago to lead the company as artistic director. Ben Raanan took the reins last year, after Linton moved to Chicago to pursue a theater career there.

After starring in several Phamaly productions, the talented and silver-voiced Jenna Bainbridge was cast as Hermia in Geoffrey Kent’s brilliant A Midsummer Night’s Dream for the Colorado Shakespeare Festival. Rather than downplaying her visible mobility problems, she and Kent used them to heart-wrenching effect when Hermia’s perfidious lover, Lysander, seized her crutch and tossed it violently away, leaving her off-balance and stranded. Bainbridge is now teaching and performing in New York.

Leonard Barrett first appeared with Phamaly as Sky Masterson in Guys and Dolls. A talented actor and terrific jazz vocalist, he had thought his multiple sclerosis ruled out any theatrical performances. After hearing him sing at a benefit, some Phamaly members asked if he had a disability, and when they learned he did, they pressed him to audition for the company. Barrett had no intention of doing so, but “Kathleen Traylor rolls up in her wheelchair and puts her arms round my neck, pulls me down and whispers, ‘Please come,’" he told Westword a few years ago. "And my heart melted.”

From that time on, he continued, “I accepted myself as a singer. I felt at home, and I've never felt at home in theater before. The Phamaly people are beautiful. There's a clarity in them and a genuineness that you don't find anywhere else.”

Lucy Roucis was finding success in Hollywood when, in her twenties, she was diagnosed with Parkinson's. She returned to Denver, found Phamaly and brought her luminous performing skills to a number of memorable roles, from flirtatious Adelaide in Guys and Dolls to the wise and compassionate Mrs. Kendal in The Elephant Man. She also taught and became a mentor to incoming actors. As her illness advanced, the group found ways to support Roucis’s work. She never knew before a show if she’d be able to perform on her feet or not, she once told Westword, so set and blocking were always arranged to fit either eventuality.

This ability to work together is one of Phamaly’s greatest strengths. Some audiences may notice the small ways in which actors encourage and help each other: a guiding hand, a whispered cue, the finger clicks with which one actor may guide another who is visually impaired.

Traylor was able to fulfill her teenage ambitions, playing many roles over the years. Owing to the ubiquitous wheelchair, which restricted her vocal cords, her songs were skillfully rearranged specifically for her. The result was a low, warm, unique and pleasing tone. Choreographers Debbie Stark and Cindy Bray created specialized dances for her and other cast members’ swirling wheelchairs.

Side Show was particularly impactful.
Courtesy Phamaly
Traylor’s favorite performance was in Side Show, an edgy, groundbreaking musical based on the lives of a pair of conjoined twins. “I ordered the CD, listened to it, and on ‘Come Look at the Freaks’ and ‘Who Will Love Me as I Am?,' I started crying," she says.

Many cast members began having flashbacks, “especially those of us who have had disabilities from birth. We had flashbacks of doctors treating us like circus sideshows, having us walk across the floor and calling us gross examples of our disabilities," she remembers.

“I mentioned this to Gregg, and he says, ‘I’m feeling the same way.’ We had a mediator come in, no able-bodied people allowed, and hashed this all out. We talked about the history of sideshows as something to be proud of, with performers counted as royalty. We talked about our medical experiences and our feelings that nobody will love us as we are, and the way this show is hitting us on a deep emotional level. We came out of this meeting feeling very proud. When we performed ‘Come Look at the Freaks,’ we stared down the audience and demanded they see and acknowledge who we are. Next to the birth of my son Daniel, it was my greatest accomplishment.”

Daniel Traylor has also directed and starred in several Phamaly productions, bringing to them his own particular dedication and humor.

Side Show was re-mounted in 2009, with Bainbridge and Linton in the leads. Both productions received critical plaudits, and some of the many awards Phamaly has accumulated over the years: Henrys, Westword’s Best of Denver, True West Awards and a Mayor’s Award for Excellence in Arts.

But there is one persistent source of grief. “All the people we’ve lost,” says Traylor. “There have been so many that I hold true to my heart. You get very close to each other. You don’t treat these people like china, but you know they’re very, very precious, and you might not be with them tomorrow.”

Roucis’s death last year was particularly hard for Traylor; the two women were close friends. “I read her writing, gave her rides to the hairdresser, had lunch with her often, and drove her to all rehearsals," Traylor says.

But there has been laughter and joy as well as grief. Traylor remembers a time when a lyrical dance for which she was wrapped in a long scarf and twirled around the stage misfired: She was twirled with such intensity that her wheelchair flew across the stage and she flew out of it. Since she wasn’t hurt, she simply sat up and continued singing. “The audience loved it,” she comments. “We caught it on video and it was all over YouTube.”

There was also a memorable, pre-Phamaly meeting with David Bowie, in Denver in 1980 for a production of The Elephant Man, who wanted Traylor’s critique of his portrayal of a disabled person. “We talked for about an hour and shared a bottle of champagne,” Traylor says. “He told me to keep on trying.”

She did, and the results will be celebrated at this year's Henry Awards.

The Henry Awards, which were named for Henry Lowenstein, one of Denver’s earliest and most revered theater producers, and created to acknowledge theatrical excellence, will be held at 7 p.m. Monday, July 25, at the Arvada Center for the Arts and Humanities, 6901 Wadsworth Boulevard. Tickets are $20 to $60; buy them and see a full list of this year's nominees at coloradotheatreguild.org.
KEEP WESTWORD FREE... Since we started Westword, it has been defined as the free, independent voice of Denver, and we'd like to keep it that way. With local media under siege, it's more important than ever for us to rally support behind funding our local journalism. You can help by participating in our "I Support" program, allowing us to keep offering readers access to our incisive coverage of local news, food and culture with no paywalls.
Make a one-time donation today for as little as $1.