Though he’s lived alternative lives as a merchant seaman, fur trader, bush pilot and minerals prospector, to name a few trades, Roddy MacInnes developed an eye and love for photography as a boy in Scotland, and it’s become his oeuvre and daily diary as the years have passed. A keen documentarian of everyday life and personal ties, MacInnes has now collected some of that ongoing visual memoir in Family Album, a new book with a time-machine twist: His own family photos are juxtaposed with images from an album kept by North Dakotan Nina Weiste, circa 1917, that he found and fell in love with at a flea market. What makes this accomplished lensman tick when he’s not snapping pictures — and even when he is? MacInnes, also an educator at the University of Denver, speaks up via the 100CC questionnaire. Roddy MacInnes, “Self-portrait, Edinburgh, Scotland,” 1989.
Courtesy of Roddy MacInnes
Westword: What (or who) is your creative muse?

Roddy MacInnes: At the risk of sounding pretentious, my creative muse is the “big picture” and trying to comprehend my relationship with it. Nobody I’ve met thus far has produced satisfactory explanations about what it all means. How beautiful is that? I position photography between myself and the “big picture,” to ask questions that have no answers. That’s what art and passion is for, right.

Victor Hugo, my personal Jesus. Les Miserables profoundly affected my life attitude, especially during dark times. Alice Austen, a pioneer feminist photographer. Alice, how did you navigate such a male-dominated medium in the late nineteenth century? My parents, both dead. I know they worried about me. Patsy and Peter, I’m okay, honest. One more: the legendary Duane Michals, still living. I want your approval, Duane.

Roddy MacInnes, “South Dakota landscape triptych (where Nina Weiste’s family homestead was in the 1880s),” 2004.
Courtesy of Roddy MacInnes
What’s the best thing about the local creative community in your field — and the worst?

What made you pick up a camera in the first place?

I was raised in the Scottish Highlands. My extended family lived in the city. It was shortly after World War II. There wasn’t much money, which meant our home was a popular holiday destination. Everyone took photos when they were on holiday. They photographed what they wanted to remember, which is why everyone is smiling in the photos. From that experience, I formed a naïve connection between happiness and photography. And with that in mind, I set out to photograph my “happy” world.

Having my first book, Family Album, published is definitely a biggie. More significantly, what I learn from working through photography projects provides the ultimate satisfaction and sense of accomplishment. It’s about the process. However, every conclusion produces more questions.

In a roundabout way, I came to Denver because of the Iranian Revolution. I was living in Canada during that time. In response to the Canadian Ambassador in Tehran hiding some American Embassy workers, preventing them being taken hostage, the Greyhound Bus Company issued the “Thank You, Canada, Pass.” The pass cost $99 and was for one month of unlimited travel in the U.S. I took advantage of the deal and subsequently made my first trip to Denver on a Greyhound Bus in 1980. During that short stay, I fell in love with the area. Coincidently, or so I thought, the Canadian company I worked for transferred me to Denver the following year. My love affair with Colorado continued to grow. Denver was beginning to feel like home. However, due to immigration complications, I returned to Scotland in 1987. When I was there, I studied photography; however, at the same time, acute homesickness for Colorado developed. And so, when my photography-degree course was complete and the immigration difficulties were resolved, I came back home to Colorado. Here I am, and here I will stay. 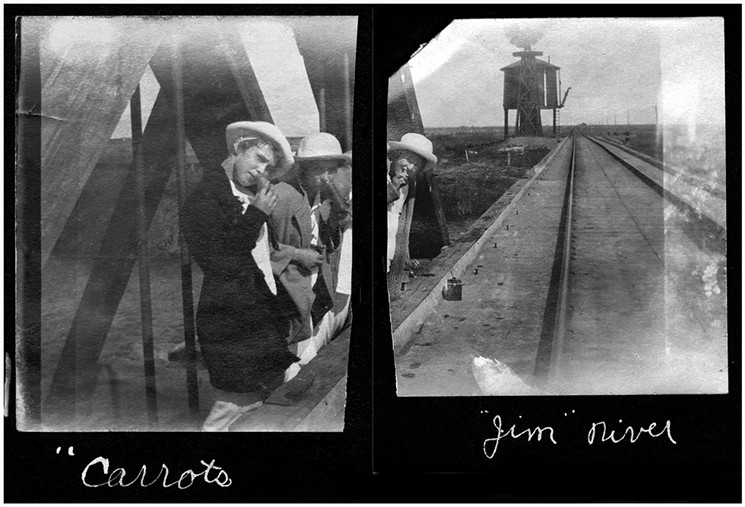 "Nina Weiste (left) and friends, near Ludden, North Dakota," circa 1917, from Family Album.
Courtesy of Roddy MacInnes
Who is your favorite Colorado Creative?

I have a few engagements set up to promote my book, Family Album — one at the Tattered Cover on Colfax in March, and another in Ellendale, North Dakota, in April. I’m writing a grant to document an Inuit community in Nunavut, Canada, this summer. I’ve been documenting a gold-exploration project in that area since 1986. I’m planning a photography project in Finland related to my book. I will be organizing a community-engaged photography project in Douglas County, Colorado. The results will be exhibited at the PACE Gallery in Parker, during Month of Photography 2019. Roddy MacInnes, “John, Ellendale, North Dakota,” 2016.
Courtesy of Roddy MacInnes
Who do you think will (or should) get noticed in the local arts community in the coming year?

Roddy MacInnes will introduce his book Family Album with a slideshow on Monday, March 12, at 7 p.m. at the Tattered Cover Book Store, 2526 East Colfax Avenue. Admission is free, and the book is available for $29.95; find details at the TC website. Learn more about Roddy MacInnes and his work at his website and @weeroddy on Instagram.