After Twenty Years, Suzanne Heintz Is Done With Playing House Suzanne Heintz
At 7 p.m. on Monday, March 8 — International Women's Day — Denver Film will screen Imitating Life: The Audacity of Suzanne Heintz. Before you watch that film and then join in a Q&A (find out how here), read all about Suzanne Heintz's creation of a fake family in our April 2020 cover story below:

Suzanne Heintz had just moved to Denver from her home town of Yonkers for an art director position with STARZ Entertainment when she found herself arguing with her mom, again, about marriage. Specifically, about Heintz’s lack of one.

“It’s not like you can go out and buy a family,” Heintz told her mother.

Then again, maybe you can.

In a moment of parental defiance, Heintz went to a retail liquidation outlet in Aurora and purchased two mannequins: Her tall-dark-and-hollow husband, Chauncey, and their forever-young daughter, Mary Margaret. Using her store-bought family, she began staging the sorts of scenes that married friends posted on Facebook for a collection of photographs titled “Life Once Removed.” In December 2000, she turned one of those shots into a sarcastic Christmas card that she mailed to everyone in her address book.

And that was the start of Playing House, her long-term mixed-media project chronicling the evolution of one extraordinarily ordinary family. Suzanne Heintz
The photos capture a drunken New Year’s Eve party, a vacation to Paris shot at the Eiffel Tower, a bobsledding trip in Steamboat Springs with real dogs during a real blizzard. More poignant are the shots of the mundane, tiny moments that make up a life: folding laundry with Mary Margaret, waking beside sleepy Chauncey.

The first few photographs in the Playing House collection were set in Colorado, mostly in Heintz’s back yard. “It wasn’t meant to be that way. I just happened to be here,” she says. But when Heintz took her project on the road to Nebraska near the end of 2001, she realized it was more fun shooting in public.

Heintz calls herself a conceptual photographer, and she has shown her work in galleries across the country. But she’s really a performance artist whose greatest creation may be the human contact emerging during day-long, on-location photo shoots. “The interaction was addictive,” she admits. “People’s reactions really shaped where I was going and the points I was making.”

Another defining moment for the project came in 2013, when Heintz was diagnosed with a brain tumor. Faced with her own mortality, the artist amped up her efforts in a major way, accelerating Playing House to a whole new level, adding shorts and “spending too much time, money and effort” on outlandish scenes.

The tumor will never go away, but after surgery and several courses of radiation, it is stable. “As long as it stays as is, I’ll be fine,” Heintz says. Suzanne Heintz
While she was recovering in the hospital from brain surgery, Heintz couldn’t help herself: She capitalized on a great set by staging a bedside photo shoot. Then she mailed out an image of Chauncey examining her gauze-wrapped head and added that postcard to her growing collection.

A year later, Heintz pulled an even more elaborate stunt when she wed Chauncey at the Grant-Humphreys Mansion. The two were married in front of family (her side and his), friends and a camera crew. Heintz’s real-life boyfriend was Chauncey’s best man.

The ceremony was colorful, over the top and a little bit kitschy. But lowbrow pop-culture elements are all part of Heintz’s genius, her way of picking away at today’s social-media-obsessed society. Suzanne Heintz
Heintz specializes in self-portraits, and she began this project long before the age of Instagram selfies. Yet it’s almost like she was looking into the future with a crystal ball. In a world filled with curated Instagram moments, she produces fake memories that are somehow more authentic than reality.

As she fleshed out her project, Heintz found that satire was more interesting than dark symbolism in those self-portraits. “Eventually I began creating photographs where the image of perfection had collapsed in on itself,” she explains, “and I moved toward the look of film stills as a better means of communicating that collapse.”

Communication remains key for Heintz, with whom I had to reschedule a recent interview many times. “My kids are home from school — probably forever — I’m struggling,” I wrote in one apologetic email.

Within thirty seconds, Heintz had replied with her standard wit. “As a fellow mom, I totally understand being overwhelmed,” she typed back with a wink emoji.

Mary Margaret isn’t quite as active as most children, since she’s a fiberglass mannequin with metal-support structures holding her armpits in place, sitting quietly for hours on end. “The whole reason for using mannequins is that they don’t have a personality,” Heintz explains. “They’re just a structure. It’s the position that’s important. Do you know what I mean?” Suzanne Heintz
Everyone does, and that is what’s so captivating about Playing House. Behind Heintz’s eccentric Technicolor photos, there’s a simple message that anyone can relate to, regardless of marital status. “If you don’t follow a master life script, you’re an outlier,” Heintz summarizes. “But being an outlier doesn’t make you any less valid.”

Like the estate-sale gingham dress Heintz wore in the Yellowstone family photo shoot in 2010, her master script was drafted with outdated notions of femininity handed down when she was growing up the youngest of four children in a traditional Mormon household: Get married, have kids, live happily ever after. For others, the script might be filled with any number of mainstream beliefs about sexuality, gender, body shape, mental health status or job title.

Heintz’s overarching message shines through in Imitating Life — The Audacity of Suzanne Heintz, an indie documentary directed by Karen Whitehead and produced by Katherine Wilkins De Francis. Through video diaries, backstage footage and archived photographs, the filmmakers offer a thorough recap of Heintz’s artistic career during a voyeuristic, hour-long journey into her personal life.

The film premiered at DOC NYC last November and screened at the Boulder International Film Festival last month. Its next local stop was set for the 2020 Women + Film Festival in Denver, but the event has been postponed indefinitely because of the COVID-19 outbreak.

Imitating Life: THE AUDACITY OF SUZANNE HEINTZ TRAILER from Suzanne Heintz on Vimeo.

Whitehead started working on the documentary in 2014. “Suzanne sparked my curiosity on so many levels when we first met,” she says of Heintz.

Beyond the obvious questions — like how you ship mannequins from Denver to Paris — Whitehead says she was “struck by the extreme length Heintz was going to. Underneath it all, I was fascinated by how the project impacted her life and relationships.”

Hours into production, Whitehead realized that Heintz “has this amazing art of being funny and serious at the same time. I think that’s an irresistible process to observe,” she says. “I felt like the audience was getting two stories unfolding at the same time. You have what you think is a basic artist portrait, but along the way there’s so much life emerging into the art in the course of the filming. There’s just a raw honesty and vulnerability that she reveals throughout the film as she opens up about her everyday struggles.”

Throughout her project, Heintz has embraced hair rollers, forehead wrinkles and the passage of time. But the Christmas card she mailed out at the end of December and early January 2020 will be the last. “Ever since I became a dancing bear for the media, my attitude toward the project changed,” Heintz admits. “I knew I had to end the project before it had, you know, an ugly ending.” 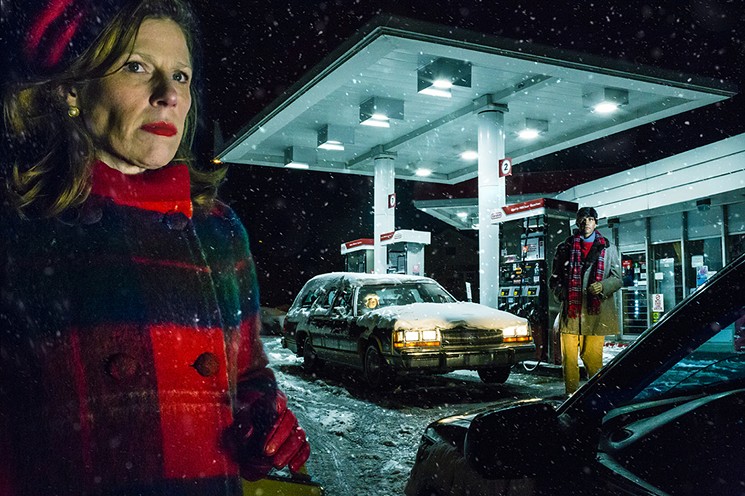 “It’s a transition shot,” Heintz explains. “While it does have a holiday atmosphere and theme, it’s shot at a gas station, which is never a destination point. It’s always a transition point in your trip.”

And now, two months after ending her twenty-year project, the world is in transition. “While it’s a horrible illness, COVID-19 provides an opportunity for self-reflection, just as my project was designed to do,” Heintz says.
“We’ve inherited the Puritan work ethic. Being busy has become a modern-day status symbol.”

When we’re always on the go, we can operate under the assumption that our lives are full, that our time is valuable. “Being busy says, ‘I’m important,’” she explains. “Being busy has become another one of those master life scripts.”

During this downtime, Heintz says, you can finally ask: “Who are you now, when you aren’t on the go?”
KEEP WESTWORD FREE... Since we started Westword, it has been defined as the free, independent voice of Denver, and we'd like to keep it that way. With local media under siege, it's more important than ever for us to rally support behind funding our local journalism. You can help by participating in our "I Support" program, allowing us to keep offering readers access to our incisive coverage of local news, food and culture with no paywalls.
Make a one-time donation today for as little as $1.