Psychedelic History Revs Up in Denver With the Family Dog Van 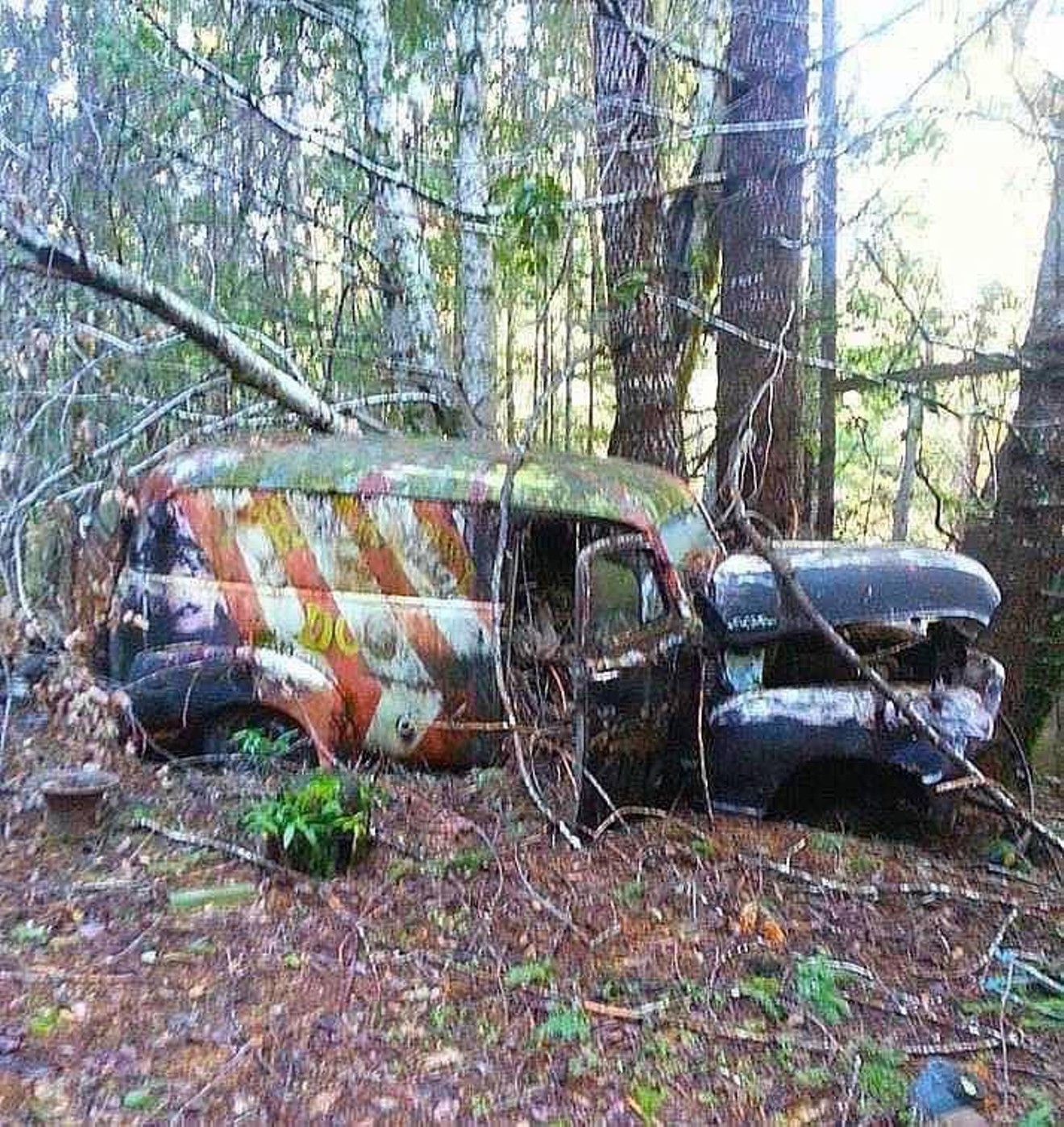 The Family Dog van was left in the woods. Willard Lewis Snow
A piece of history will find its way to Denver's Dive Inn on Sunday, July 31. The Family Dog van, now owned by Chris Stames, was a driving force during the San Francisco psychedelic scene of the ’60s, when a collective that became known as the Family Dog hosted concerts with the likes of the Grateful Dead, Janis Joplin, the Charlatans and Jefferson Airplane.

“The collective was originally based out of Detroit and operated under the name the Arts West Movement," Stames explains. "But in 1964 or 1965, the group moved out to Haight-Ashbury due to the low housing prices.” It hosted some of the city's first first psychedelic rock events in the basement "Ball Room" of a rented mansion. Because so many members of the collective had dogs, they adopted the Family Dog name, which later morphed into Family Dog Productions. 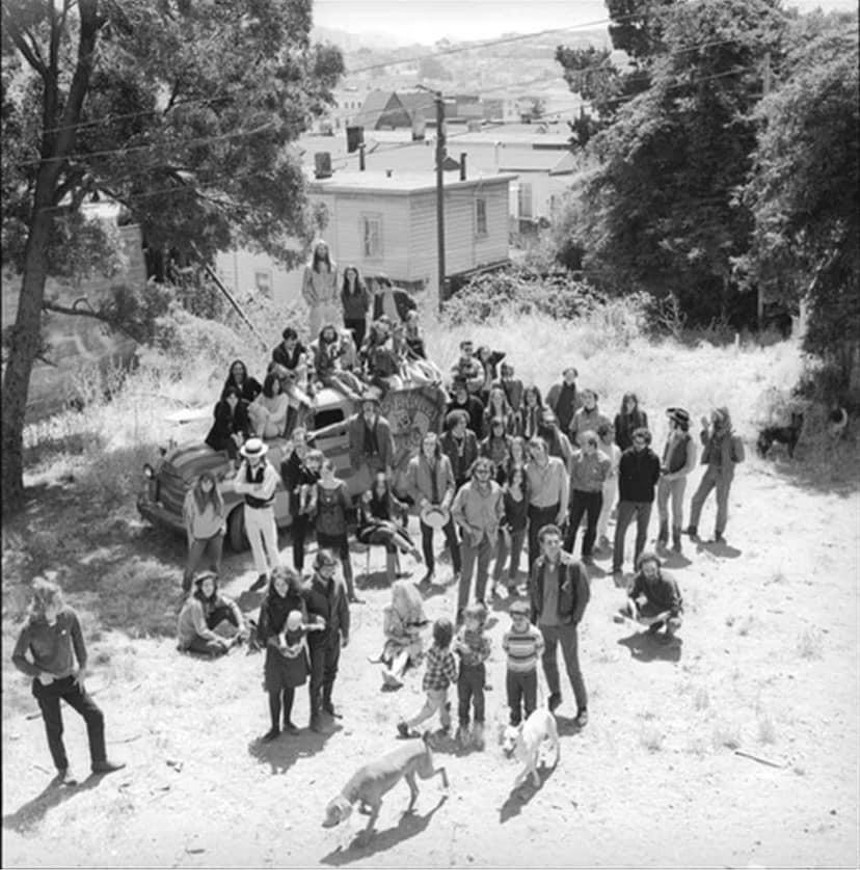 Charlatans, with Big Brother and the Holding Company, including Janis Joplin.
Herb Green
Even with dozens of dogs, one particular pooch named Sancho led the pack. The free-spirited pup belonged to Homicz and was known to be "the alpha male of the pack," Stames says. "A free-roaming dog, coming and going as he pleased, in and around the Haight-Ashbury neighborhood." Sancho's portrait is seen on both sides of the van's body, next to the Family Dog name. The splashy paint job, which includes a mandala across the roof, was done in 1965 by Stanley "Mouse" Miller, a revered psychedelic artist.

The colorful van was the collective's primary mode of transportation, and would haul all concert necessities up and down the West Coast. “From the streets of Haight-Ashbury to the free concert at Golden Gate Park and all along the beach parties of the late ’60s, the truck was there," Stames says.

As the group's enterprise grew, the Family Dog began hosting bigger events, and the collective hired a team of talented graphic artists to design and promote handbills for upcoming shows. These artists became known as "The Big 5" and included Stanley Mouse, Rick Griffin, Wes Wilson, Alton Kelly and Victor Moscoso. Their posters drew in greater crowds and become a staple of the psychedelic rock scene.

But the Family Dog was not just a part of San Francisco's history; it also made waves in Denver. With the collective's blessing, Barry Fey opened a branch in the Mile High City in 1967, located at 1601 West Evans Avenue. Although the club had a short run, closing in 1968, it showcased some of rock and roll's biggest stars, including Janis Joplin, Jimi Hendrix, the Doors and the Grateful Dead. The site is now home to a strip club, PT's Showclub.

The San Francisco Family Dog, lasted until April 19, 1970, with the Grateful Dead and the New Riders of the Purple Sage as its last performers.

Homicz moved to Garberville, California, at the southern end of the state's redwood forest. The Family Dog van broke down on the 200-plus mile on the trip, and he decided to abandon the seventeen-year-old former plumber's truck deep in the woods, where its hippie paint job started to fade. 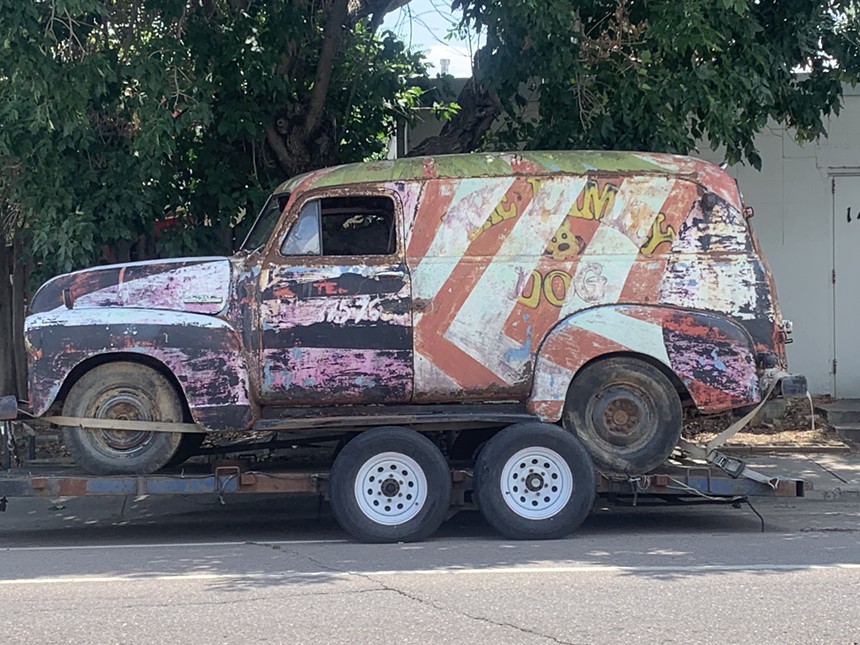 The Family Dog truck today.
Chris Stames
Enter Stames, a born-and-raised Denverite and a lover of psychedelic history. He'd heard of the Family Dog van from a friend, Rusty Goldman, who had posted a photo of the truck on his popular Professor Poster Facebook page. Goldman had actually helped move equipment from the truck when he was sixteen with “his older brother, who ran around with the Charlatans, the Dead and the Merry Pranksters," says Stames. "It was because of these bands' association with the Family Dog that Rusty got involved with the truck to begin with."

Both Goldman and Stames thought the truck to be "lost to history, for all time," Stames says. But last November, Stames found the truck buried in a Facebook ad. He immediately forwarded the information to Goldman, who told him he didn't have time for the restoration endeavor. Stames then mentioned the van to his neighbor, who agreed to pool his money with Stames to buy it. While he backed out of the restoration project, he still gave Stames funds to buy the car, who says he's now the "accidental owner of the Family Dog panel truck."

Stames will bring the truck to the Dive Inn for a grand unveiling party on July 31, complete with a light show to a soundtrack showcasing the psychedelic music of the late ’60s. The event will also include a showing of the award-winning documentary The Tale of the Dog, which documents the history of Denver's branch of the Family Dog.

The Family Dog van is the focus of a larger restoration process, which Stames says could cost $150,000; he's created a GoFundMe page to help finance the effort. He hopes to place the van in the Smithsonian's San Francisco exhibit, and has also reached out to the National Register of Historic Places and the Historical Vehicle Registry to see if the truck could be included.

Family Dog van unveiling, 7 p.m. to midnight Sunday, July 31, Dive Inn, 1380 South Broadway. Admission is free, and food and drink will be available for purchase; find out more here.
KEEP WESTWORD FREE... Since we started Westword, it has been defined as the free, independent voice of Denver, and we'd like to keep it that way. With local media under siege, it's more important than ever for us to rally support behind funding our local journalism. You can help by participating in our "I Support" program, allowing us to keep offering readers access to our incisive coverage of local news, food and culture with no paywalls.
Make a one-time donation today for as little as $1.