Acronychous Is the Edgiest Nail Art Salon in Denver 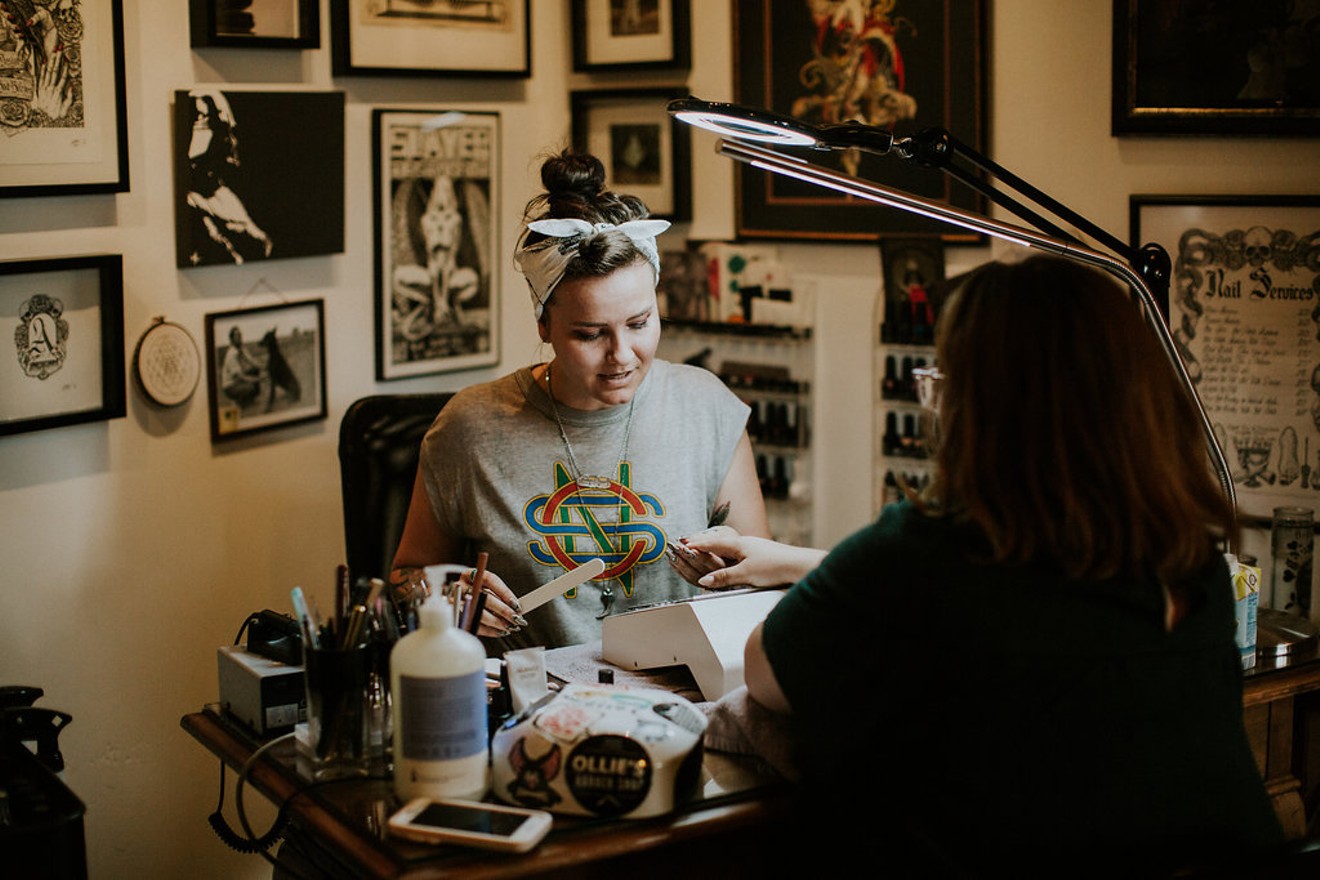 Rachael Bowen, who owns Acronychous nail shop in the River North Arts District, preps her client for a manicure. With Love Photographers
Rachael Bowen's nail shop off of Larimer Street in the River North Arts District — tucked behind Our Mutual Friend Brewing taproom between 28th and 29th streets — can be hard to spot. But Bowen's shop, like a good manicure, is anything but subtle.

Bowen has worked in restaurants, tech and as a video-game tester, but she has little fine-art training outside of studying photography in college. Nonetheless, she has made the tiny shop, named Acronychous, a huge success. Bowen specializes in nail art: Think manicures, but more than just your regular accent nail or acrylic adhesives.

Rachael Bowen preps a client's nails for a simple manicure.
With Love Photographers
Her work can be as simple as a French manicure in bizarre colors or as elaborate as intricate designs on each nail decorated with charms. The twist here is Bowen's aesthetic, which she describes as "Grandma's parlor room that you're not allowed to go into, venturing into the macabre."

The craft here is not only being able to prep and shape nails professionally, but also heading into unexpected territory to adorn the nails. Bowen uses gel nail polish as opposed to acrylic (one of the few shops across the country to do so) to paint designs on natural nail beds, and, she can hand-sculpt sets of nails for her clients.

"I think it's an attention to detail, it's an eye for pattern, and it's design work in a lot of weird ways," says Bowen.

Rachael Bowen preps the nail with a base coat for a simple manicure at Acronychous.
With Love Photographers

The shop offers roughly 150 gel pigments, and Bowen uses extra ornamentation, including charms to encase in the gel as well as Swarovski crystals, glitter, chrome powders and pigments; she'll even create stamping plates to apply designs to nails. Bowen can also add five to ten different colors to each nail before it gets too bulky. She takes pride in not using glue, plastic tips or acrylic application, which most nail salons depend on.

Acronychous has a few options for nails and toenails. Most popular are the manicures. Bowen provides simple and complex designs.

After prepping the nail and adding the base coat, Bowen begins on one finger for a simple design.
With Love Photographers

All of the designs Bowen showcases are of her own creation and are done by her own hand. She prefers to create the unusual and enjoys discovering new ideas.

"I'll do a set of nails, and people will see it and come in asking for that," she says. "So it's easy to do the same five to ten manicures in a month. Then I start getting antsy."

She gets help from her clients by asking for new ideas on her Instagram page (@acronychous). Usually, clients will bring in photos of designs to inspire her, but sometimes they'll challenge her with something a little different.

"One of my clients brought in the wallpaper she's finishing her bathroom in," continues Bowen. "Somebody came in and asked if I could make her nails look like the inside of a men's bathroom stall. I said, 'All right, let's go. I'm gonna put dicks on your nails.'"

These are just a few of the examples of Bowen's work, which also include the "snakeskin mani," which is an Acronychous staple (she even has a client who added actual snake skin from a pet to her manicure). "Some nail techs will encapsulate flowers, weed, scorpions or spiders," she explains.

Applying the gel paint for the design is one of the final steps of the simple manicure, before adding the top coat. Bowen uses only gel in her shop, Acronychous.
With Love Photographers
Bowen relies on her experience to create designs for specific clients, which she says just comes with time. Sometimes that means having to "burst the bubble" for some clients who may come in with their heart set on a design they saw online, but who may lack the natural nails, funds or time to pull it off.

"There's definitely designs that look better on different shapes and nails," Bowen says. "That's where just having done it for long enough and knowing design-wise what will work [comes in]."

Bowen used to practice designs on nail sets that she would build out. Now that her business is in full swing, she hones her skill working with her clients.

The shop, located at 2830 Larimer, is full of furniture, curios, gifts and artwork. It doesn't necessarily scream "nail salon," which is actually why Bowen refers to the place as her shop and why the shop isn't named "Larimer Street Nails" or something else generic.

Acronychous, which is pronounced ah-cron-uh-cus and translates to "having nails, claws, talons or hooves" in Greek, was an intentional search for Bowen.

"When I was in school and as a Greek mythology nerd, the first chapter in one of the books was about the history of nails and adornment and the art of painting the nail." This struck a chord with Bowen, who loved the idea that these ancient cultures would stain their nails black, red or gold in preparation for war or celebration or just to discern nobility. Once Bowen found the word "acronychous," it was an obvious choice.

Her interest in nail art started with a visit to a close friend in New York City, somewhere around 2011 or 2012. Her friend took her to a nail salon that specialized in nail art. Bowen received a design that included black gel with two upside down crosses on her thumb and ring fingers. When she returned to Colorado, people couldn't stop noticing her nails.

"Even that early on, I remember just planting a little flag in my mind: 'Oh, there's really nothing like this over here,'" Bowen explains. She kept an eye out for any nail salons in Denver and Boulder that specialized in nail art over the next few years, but there was nothing until 2014. That's when she discovered a website for 3-D nail art and her current mentor, Rachael Waggonner, who owns Dazzlin Digits in Lakewood.

Additional products and adornments that Bowen will use when crafting sets of nails or manicures.
With Love Photographers
Bowen started going to Waggonner's salon while she worked for a video-game company in Boulder as a customer service representative. At the time, she had an inkling that the company would fold (which it did), and would vent to Waggonner about it while getting her nails done. At the same time, Waggonner couldn't accommodate new clients because she was so booked, so she told Bowen to go to nail school and work for her. When things at Bowen's tech company really started going downhill, she enrolled in nail school at Westland Beauty Academy in Lakewood, which is where Waggonner taught.

Bowen, who has always loved working with her hands and working with process-driven trades, went through the 600-hour program that offered an elective in the rare gel technique. Bowen sought that out specifically, knowing she wanted to be a gel technician.

"I wanted to specialize in something different," says Bowen. "I finished nail school faster than any other student that school had ever had. That was October of 2016. I was licensed by the end of December and opened the shop in January 2017."

Bowen never did work for Waggonner, but was able to secure a spot in a Boulder waxing salon while finishing up her licensing. At the time, she was based in Boulder, but the outdoorsy city wasn't the right demographic for what she wanted to do, so she moved back to Denver and opened her current space.

Now, Acronychous is growing — quickly. Bowen started with a handful of clients, but now her books are closed and she's seeing her Instagram following grow every day.

Rachael Bowen stands outside of her nail shop, Acronychous, in the River North Arts District.
With Love Photographers
"It's really hard to accommodate new clients, because I don't have enough hours in the day," she says.

Bowen recently hired another nail technician and is even taking on an apprentice at the shop.

"I don't want to have a giant shop with a ton of stations, but I do want to accommodate more clients. I want to stay here," explains Bowen. "I've never had my own business before, and when they say 'It's your baby,' it totally is your baby. It's challenging, but rewarding as hell."
KEEP WESTWORD FREE... Since we started Westword, it has been defined as the free, independent voice of Denver, and we'd like to keep it that way. With local media under siege, it's more important than ever for us to rally support behind funding our local journalism. You can help by participating in our "I Support" program, allowing us to keep offering readers access to our incisive coverage of local news, food and culture with no paywalls.
Make a one-time donation today for as little as $1.