Review: Rape of the Sabine Women a Real Sex-Ed Lesson 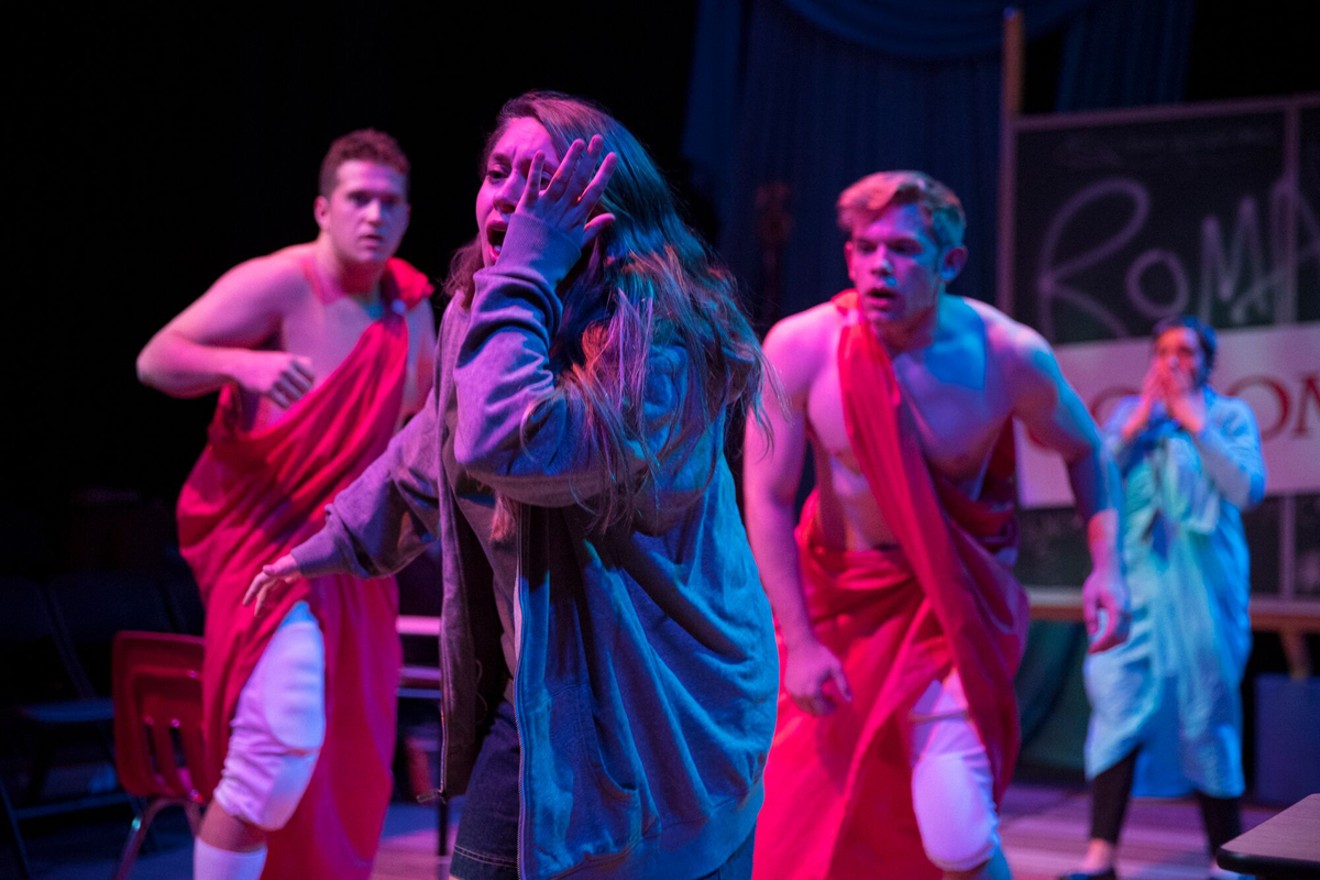 Peter Henry Bussian, Adeline Mann, Erik Fellenstein and Mare Trevathan in The Rape of the Sabine Women, by Grace B. Matthias. George Lange
Playwright Michael Yates Crowley mingles sensitivity, myth and outright cartoonishness in his exploration of rape — a topic that’s been receiving a lot of attention lately. In The Rape of the Sabine Women, by Grace B. Matthias, now receiving its regional premiere from Local Theater Company, Crowley uses the legendary rape of the Sabine women as a frame, and the play begins when a teacher shows a copy of Jacques-Louis David’s “The Intervention of the Sabine Women” to his class. In the painting, a woman, Hersilia, stands between two raging-for-combat armies — the Romans and the Sabines — with her arms outstretched to stop the carnage; she is both victim and heroic peace-keeper. According to legend, the Sabine women forgave and married their captors, becoming the mothers of Rome. Some scholars believe they were “merely” abducted rather than raped.
But how credible is this gentler version? To this day, rape is used as a weapon of war by armies all over the world — and perhaps someone should ask the teenage girls kidnapped by Boko Haram and told they could either “marry” their captors or be sent inside enemy lines as human bombs how they define their predicament.

In the teacher’s class are Grace B. Matthias; Jeff and Bobby, members of the high school football team, the Romans; and Grace’s cheerleader friend, Monica. Grace, slouching in her gray cardigan and played with touching honesty by Adeline Mann, is shy and bewildered, the class eccentric, but Jeff is drawn to her. To Crowley’s credit, Jeff is not a monster but himself a confused teenager. Erik Fellenstein channels this inner confusion, and the early scenes between Jeff and Grace are touching. Unfortunately, Bobby, played to the hilt by Peter Henry Bussian, is the stereotypical toxic male, unconsciously — or half-consciously — attracted to Jeff, and given to hurling the epithet “pig” at Grace. Or not exactly hurling, because he speaks the word so frequently it sounds almost casual — and Grace, accustomed to hearing it, hardly bothers to react. Bobby is a vicious influence on Jeff, and Grace is horribly vulnerable to an act of sexual violence.

Most of the characters who surround Grace afterward are caricatures: a self-absorbed counselor (Mare Trevathan, memorable in this and a couple more roles) who insists that Grace must be emotionally destroyed by her experience, a news commentator (Matthew Schneck, appropriately idiotic), a venal lawyer (smooth-talking Cajardo Lindsey), a group of speakers representing Wikipedia, there to answer questions, and Rodney Lizcano as the troubled teacher. Monica urges Grace to shrug off the attack as something that happens all the time and should be taken in stride. Under pressure, Jeff himself descends into caricature, mechanically repeating, “I love football.” Now and then, Hersilia herself appears for a shining moment. Brynn Tucker has great appeal as both lithe, flippant Monica and lovely Hersilia.

Sometimes the stereotyping feels too broad. I don’t have much trouble with the idea that football can represent the uglier aspects of male dominance; it’s right there in the player-cheerleader dynamic, and there have been several reports of members of small-town football teams raping girls and then being hotly defended by the townspeople while their victims are attacked for impugning the team’s honor. But the concept is overdone here, as is the depiction of firefighters as muscled, posing preeners with the same repressed homosexual urges that led Bobby astray.

Fire is a metaphor throughout. An unquenchable fire burns beneath the town’s soil, periodically roaring into life, the same fire that burns through history. The implication is that male violence is inhuman, eternal, primeval. But Grace, who is consumed by a vision of women being raped and giving birth to rapists who continue the unending cycle, is determined not to stop fighting.

Under the direction of Christy Montour-Larson, some moments are genuinely powerful, even if a few patches feel preachy. There’s an electric silence in the theater as Jeff and Grace slowly begin discovering each other’s bodies, and we feel Grace’s terrible isolation after the rape. Other scenes are hilariously funny. It adds up to a risky piece of theater, seething with questions and full of life.

The Rape of the Sabine Women, by Grace B. Matthias, presented by Local Theater Company through November 19, Dairy Arts Center, 2590 Walnut Street., 303-444-7328, dairyarts.com. In conjunction with the play, Local Theater Company is offering Hard Talks, a series of conversations on the rape culture. Get tickets to the show and find out more about Hard Talks at localtheaterco.org.