Gregg Deal uses old comics as part of his exhibit. Gregg Deal
"I was told a mural is only considered paint on a wall in the preservation world," says Lucha Martínez de Luna, a Chicana archaeologist and activist. "How are we going to protect something that they don’t even recognize what it is?"

Martínez de Luna is the director of the Chicano/a/x Murals of Colorado Project, which she co-founded to save historic murals painted by Chicano/a/x artists that depict significant parts of Colorado history, such as Spanish colonization in the Americas as well as discrimination and forced migration.

Founding the mural project was a natural progression for Martínez de Luna. With a lifelong interest in history and the art and artifacts that represent it, she has worked on many archaeological projects in the United States and southern Mexico. She recalls how in 2012, she began an excavation with La Providencia Archaeological Project in Chiapas, Mexico. Her team discovered a large ceremonial complex there, and archaeologists have been seeking artifacts at that site ever since.
click to enlarge Lucha Martínez de Luna of the Chicano/a/x Murals of Colorado Project.
RedLine Contemporary Art Center
This year, the Chicano/a/x Murals of Colorado Project caught the eye of the National Trust for Historic Preservation, which included the project's murals on its list of America's eleven most endangered places in 2022. The project has mapped Chicanx murals throughout Colorado, and it works with the State Historic Preservation Office to determine how they can be protected and preserved.

Martínez de Luna will be talking about the Chicano/a/x Murals of Colorado Project during her keynote address at RedLine Contemporary Art Center's 48 Hours of Socially Engaged Art & Conversation on August 12 and 13. The summit kicks off RedLine's 2022-2023 exhibition program, collectively titled Roots Radical: An Exploration Into Indigenous Ancestry and Experience.

RedLine has been creating yearly exhibition themes since 2014. Last year's was Afrofuturism + Beyond, which used art to imagine how Black individuals can exist in a future that is more positive than a racist and oppressive past and present. And now, Roots Radical will explore Indigenous displacement and disenfranchisement, as well as how perceptions of Native people are often created through a white narrative.

The two-day summit will comprise performances, art exhibits, talks and workshops surrounding Indigenous culture, ancestry, experience and issues, supplemented by food from Tocabe and other local restaurants. It's just the beginning of Roots Radical's 2022-2023 program, which will include multiple events throughout the coming year, including Studded Sash Belt, an exhibition opening in January that will showcase Indigenous fashion designers; an Indigenous mural showcase next summer; and more.

RedLine Executive Director Louise Martorano says that this year's theme was inspired by a conversation she had with artist Gregg Deal, a member of the Pyramid Lake Paiute tribe, about the relationship between punk-rock music and Indigenous identity. “RedLine’s annual program series are always inspired by artists in our community," Martorano explains. The name Roots Radical, she adds, came from the concept that a person's roots can be lost or damaged through colonization.

"Oftentimes when you are colonized, those roots are injured and torn apart and severed...because of systems of racism and oppression that have happened to Indigenous peoples," Martorano says. "Punk rock, as many other music genres are when they first hit our scene, [is considered] radical because they’re saying things that are anti-system and against authority."

That anti-authoritarian theme will be explored at the summit through the works of Deal, who is also a keynote speaker. His exhibition, End of Silence: A Punk Survey of Gregg Deal, takes illustrations from the 1953 comic book White Indian and re-illustrates them to erase the "white savior" stereotype they play into. "Indigenous people are either winning in these images or they’re standing and saying something strong, which is sort of the antithesis of the stereotype," Deal says. "As an Indigenous artist and as a Native artist, it’s sort of rooted in that narrative of trying to flip the script a bit, and reimagining what those spaces would look like without the historical disenfranchisement and racism that goes along with it." 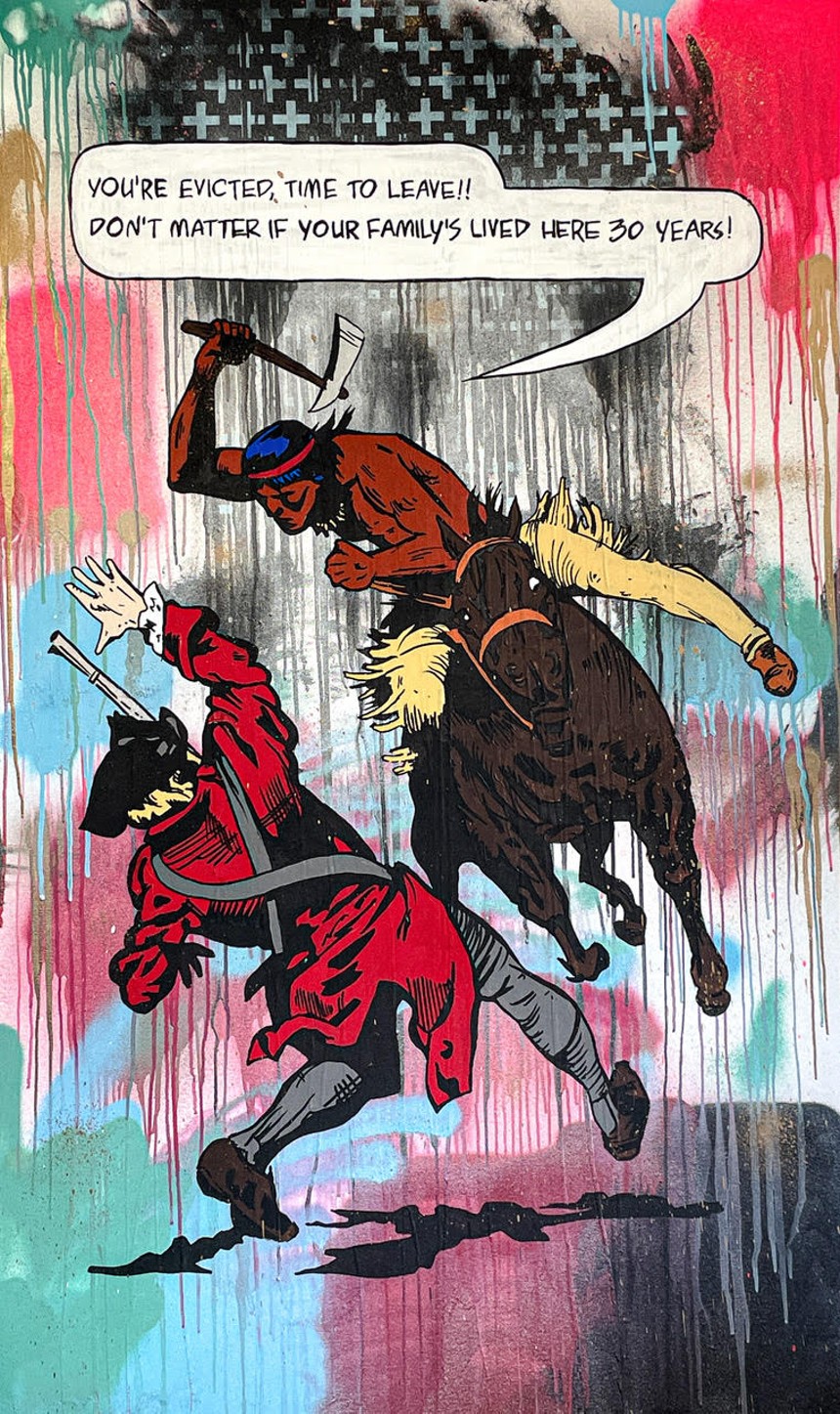 Gregg Deal uses old comic book images to recast Indigenous stereotypes.
Gregg Deal
Alongside the illustrations are lyrics from punk-rock songs that discuss disenfranchisement. "There’s a piece from the Sex Pistols called 'Anarchy in the U.K.,' and the image is of a Native person punching a priest. It says, 'I'm an Anti-christ, I'm an anarchist. Don’t know what I want, but I know how to get it,"' Deal says.

Deal's keynote speech will address the themes in his art as well as how stereotypes can influence what people expect to see in Indigenous art. His exhibit will be one of two on view at the summit; the other is The Red Road Project, a combination of pictures and words by artists Danielle SeeWalker and Carlotta Cardana, who explore the experience of Native Americans in the 21st century.

SeeWalker will also host a panel on the high rate of missing-person cases and homicides in Indigenous communities. She and her fellow panelists campaigned to get SB22-150 signed into law in June, establishing an office to ensure that the Colorado Commission of Indian Affairs is involved in such cases. "When you’re dealing with people that live on sovereign lands, the local police cannot step in and investigate; it has to be the FBI," SeeWalker notes. "There’s this whole complication of jurisdiction."

Under federal law, the FBI must investigate crimes on Native American reservations, which can result in some cases not being investigated promptly or important information going missing, SeeWalker says. Additionally, people are not always aware that someone who is missing or murdered is Indigenous, and tribes aren't always informed right away.

That was the case with her aunt, Gertrude "Birdie" SeeWalker, who was 65 when she was assaulted on East Colfax Avenue last year. "My aunt from Standing Rock Nation got murdered on Colfax in Denver, and she was misidentified as being a Latina woman," SeeWalker says. "Misinformation of data is being collected at the forefront of these cases."

RedLine's artists are eager to kick off a year of conversation surrounding Indigenous culture and to radically overthrow common Western narratives of Native people.

"Usually these types of things are tied into academia somehow, or powwows or Indigenous People’s Day," Deal says. "I love that this is just happening because it’s happening. It doesn’t have to have a reason or a purpose."

48 Hours of Socially Engaged Art & Conversation, 9 a.m. to 9 p.m. August 12 and 13, RedLine Contemporary Art Center, 2350 Arapahoe Street; registration is free and open now.
KEEP WESTWORD FREE... Since we started Westword, it has been defined as the free, independent voice of Denver, and we'd like to keep it that way. With local media under siege, it's more important than ever for us to rally support behind funding our local journalism. You can help by participating in our "I Support" program, allowing us to keep offering readers access to our incisive coverage of local news, food and culture with no paywalls.
Make a one-time donation today for as little as $1.
Katrina Leibee, a recent graduate of Colorado State University, is an editorial fellow at Westword, covering politics, business and culture.
Contact: Katrina Leibee
Follow:
Twitter: @katrinaleibee