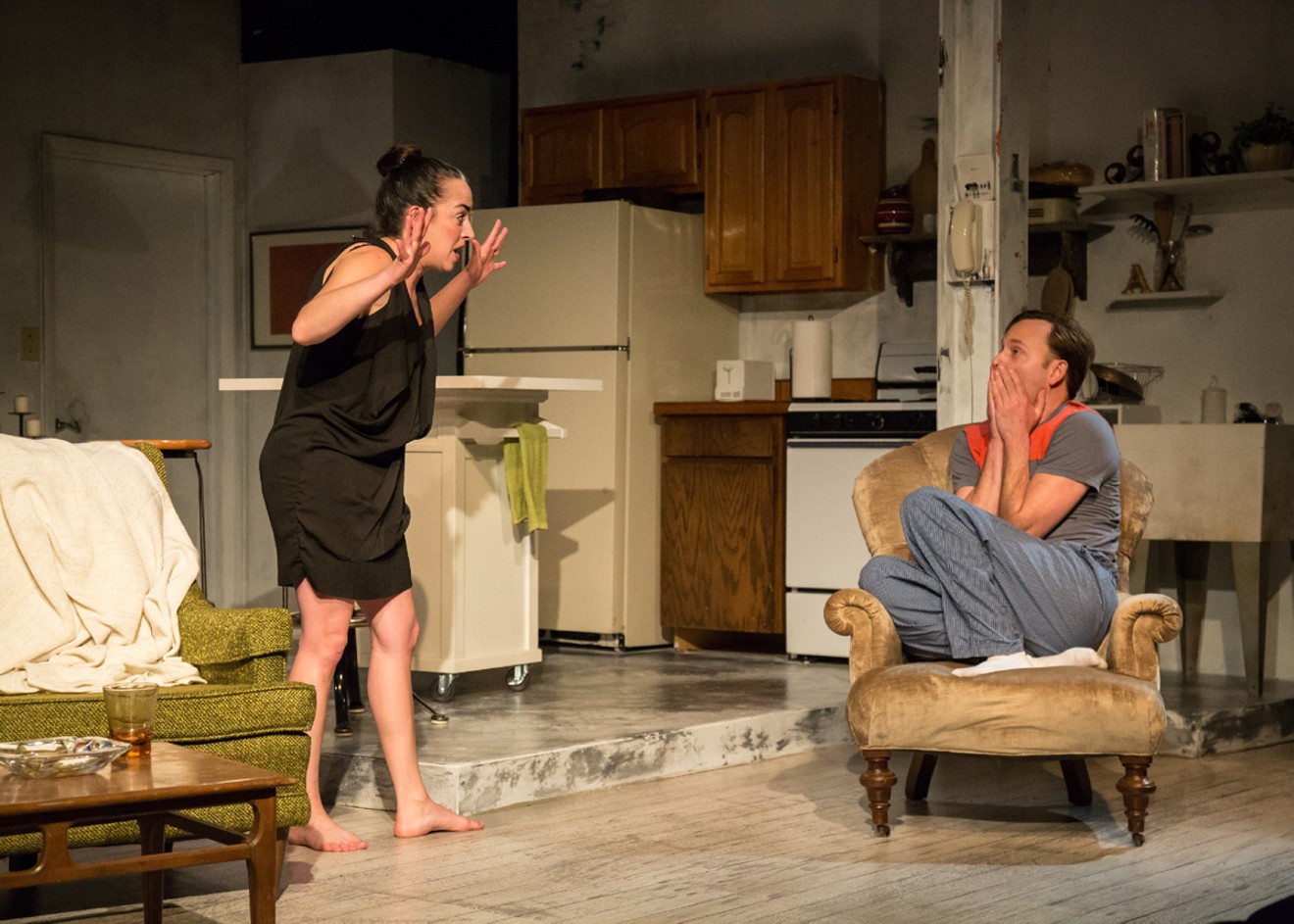 Karen Slack and Drew Horwitz in Burn This. Rachel D. Graham Photography
Burn This begins in grief as Anna, a dancer turned choreographer, mourns the loss of her roommate and dance partner, Robbie, who died in a boating accident with his lover, Dom. Anna’s own lover is Burton, a low-key and pleasant-spoken screenwriter, somewhat ashamed of his wealthy background and struggling to write a meaningful rather than commercial screenplay. He attempts to comfort Anna as she describes the sad ironies of Robbie’s funeral: His out-of-town family had never seen him dance, and apparently had no idea that he was gay. Anna’s other roommate, Larry, is in and out of the action, contributing sardonic interjections. Late that night, all hell breaks loose as Robbie’s brother, Pale, knocks thunderously at the door and then erupts into the room. He has come to collect his brother’s things — but he’s too coked up to be even halfway functional, and he engages in a loud, bitter monologue about the streets of New York City (“dying of crotch rot”), the difficulty he had parking his car, the state of his expensive trousers, and the way his even more expensive lizard shoes make his feet burn: “You’d think a lizard’s got to be supple, right? They got to move quick.”

If you’ve never seen William Hahn on a stage, you need to catch him as Pale in this Edge Theater production. The role is an actor’s dream — as full of rage and anguish as it is hiccup-inducing funny — but it’s hard to imagine any actor (including John Malkovich, who famously played it in a long black wig in the play’s 1987 premiere) embodying Pale with the power, passion and perverse physical grace of Hahn, with his long, lean, leaping body, bald head and flayed-seeming face. A performance of this magnitude could easily eclipse those of other actors, but director Warren Sherrill has provided a match by casting Karen Slack as Anna. The role is not as dramatic — while she’s sad, neurotic and artistically blocked, Anna isn’t actually nuts — but Slack gives Anna a vivid intensity even when she’s sitting perfectly still, listening, stunned by Pale’s outburst.

Drew Horwitz is perfect as Larry. When your fellow actors are working at such a high pitch, it’s always a good idea to come in low, and Horwitz makes Larry gay but not swishy, sympathetic but never sentimental, and very funny. John Jankow’s Burton is a teddy bear, kindly and warm.

Lanford Wilson’s script has some stunning moments, as when Anna describes the terrifying night-time fluttering of pinned butterflies in the room where she stayed after Robbie’s funeral. Flame is a metaphor throughout, whether applied to a lit cigarette, a confidential message burned in an ashtray or the red-hot toaster oven residing in Pale’s chest. But there are flaws to the script. Fascinating as Pale is, the character doesn’t make sense; by the second act, this terrifying maniac has become a little too domesticated. Turns out he’s the manager of a restaurant in Montclair, New Jersey, which makes it hard to understand why he’d be surprised that it’s difficult to park in New York or would wonder at the ascetic bareness of Anna’s loft apartment. The man is a good cook, persnickety about the way his tea gets brewed, and there’s a completely harmless reason for the gun we saw in his pocket in the first act — which he’s lost by the second, anyway. The frisson we’d been sensing between this raging, modern-dance-hating homophobe and Anna’s artsy circle is far more interesting than the belated discovery that the guy is mildly complex but essentially ordinary. We learn of Anna’s concerns about her artistic career, but not nearly enough about the process leading to the triumphantly beautiful piece she finally creates, inspired by her relationship with Pale and clarifying her feelings toward him. Despite the stellar performances, at the end of the play I had no more idea why she would fall for this person than I had at the beginning. You do sense a paradoxical gentleness and warmth between the two of them now and then, but nothing like the sexual passion that could persuade a sane woman like Anna to attempt a relationship with a madman.

Even so, there’s some wonderful writing in this drama of love, loss and art that, coupled with the strong performances, makes for an absorbing, electrifying, don’t-miss production.