Review: Abstraction Has the Starring Role in Four Robischon Solos 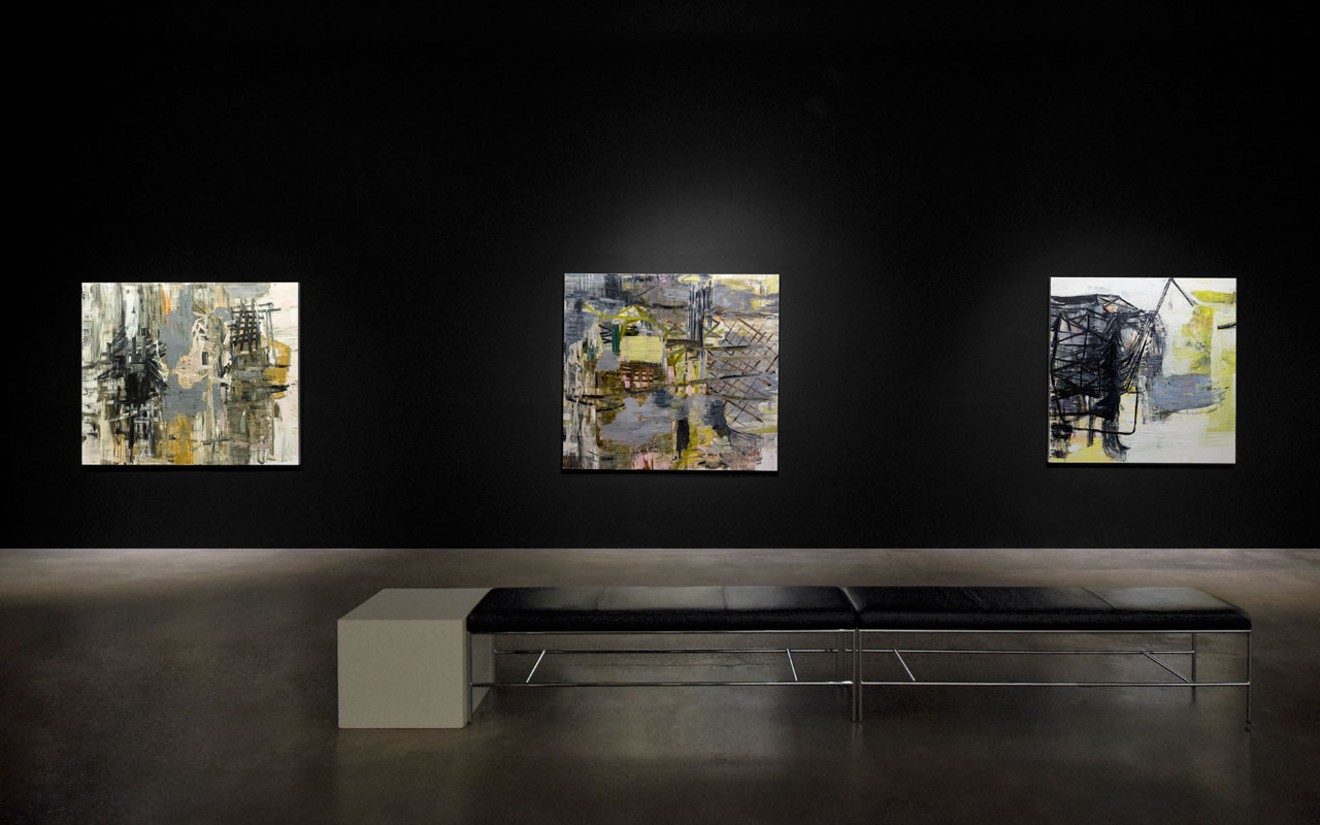 Installation of Deborah Dancy’s Turbulence at Robischon. Courtesy of Robischon Gallery
Abstract expressionism, the mid-twentieth-century movement that rewrote art history, is still pointing the way for many contemporary painters. The defining characteristics of abstract expressionism (a sensibility rather than a single style) are non-objectivity and exploration of the physical characteristics of the pigments themselves. How the paints flow, how they drip, how they smear, how they can be tissue-thin or as thick as putty, are all urgent concerns. Abstract-expressionist paintings put equal importance on the entire surface of the canvas or panel, in contrast to a traditional portrait, in which the center is the most critical, or a traditional landscape, in which the foreground is key. Robischon Gallery is currently hosting three solos with paintings that somehow refer to, or are tied to, the epoch-making approach of abstraction, while a fourth includes abstractions based on natural shapes. This last solo may be unrelated to the others, but it looks great with them anyway.

The enormous spaces up front are devoted to Deborah Dancy: Turbulence. Although Deborah Dancy has been exhibiting her work since the 1980s, this is her Denver premiere. Dancy’s interests are wide-ranging; in addition to abstracts, she also does straightforward photos of iconic objects such as urns and vases, but none of those are in this show. The long wall to the left of the entry is painted black, as it was for the earlier John Buck show, and Dancy’s paintings — “Trapped by My Own Devices,” “Some of This and Some of That” and “Pitch and Pendulum” — which are lined up along it, positively pop. The three paintings are compatible, with related if not identical palettes that are big on white, gray and acidy green, and all have similar formal constructions playing major roles in the compositions. “I construct imagined forms from my examination of the disjointed properties that exist between natural and architectural structures,” Dancy writes. This idea manifests itself in the shapes in the paintings that hint at the illusions of figures and buildings. Dancy’s process — in which she instinctively makes marks, then scratches them out, covers them over or leaves them alone — conveys movement and action; you can easily imagine the artist slashing at the panels with paint-loaded knives, brushes and maybe even spatulas. These paintings really work. Komarin has a firsthand connection to the original movement. Decades ago, he was a protégé of Philip Guston, an abstract expressionist who went on to invent "dumb" art in which crude depictions of recognizable things are done with abstract moves. These paintings take off from a similar place, with Komarin laying in heavily worked color fields, then putting awkwardly shaped forms on top or within them. These shapes are often evocative of body parts, though only in the broadest possible way. Dots are also a motif, and, as he does with the organic-ish shapes, Komarin employs them to great effect. Some of the standouts — in a show of nothing but strong efforts — are “The Vicar’s Wife in Grey With Orange,” “Swiss Positions #9” and “The Far Field,” all of which are minimalist color fields with a touch of cartooning here and there. Komarin also uses toned-up colors, with individual panels typically having a definitive overall shade, and the results are fabulous. 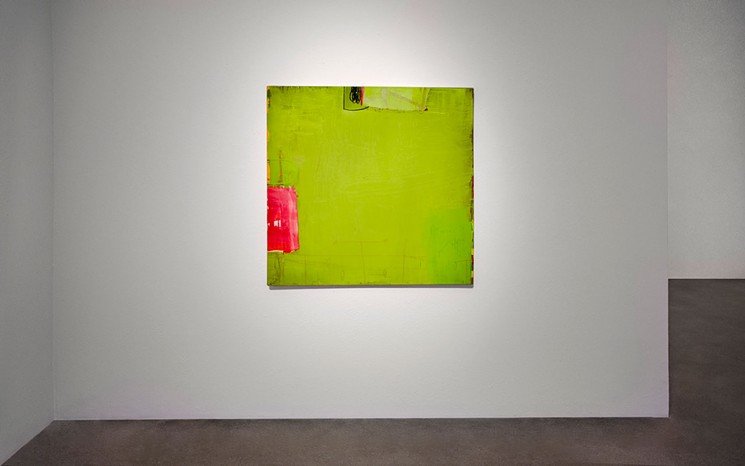 Gary Komarin, "The Far Field," in Swiss Positions at Robischon Gallery.
Courtesy of Robischon Gallery
In the large back gallery, Tom Lieber: Mulas (Nakshatra) includes paintings that are much more a continuation of abstract expressionism, essentially neo-abstract expressionism, than a commentary about it. The pieces are invariably large, because otherwise they couldn’t capture the painterly gestures Tom Lieber trades in. The paintings typically have atmospheric fields on which Lieber has added long arm’s-length strokes on top of abundant runs and drips, paint-outs and paint-overs, all of them seemingly done rapidly. The physicality of the artist is translated directly through the slashes of paint. 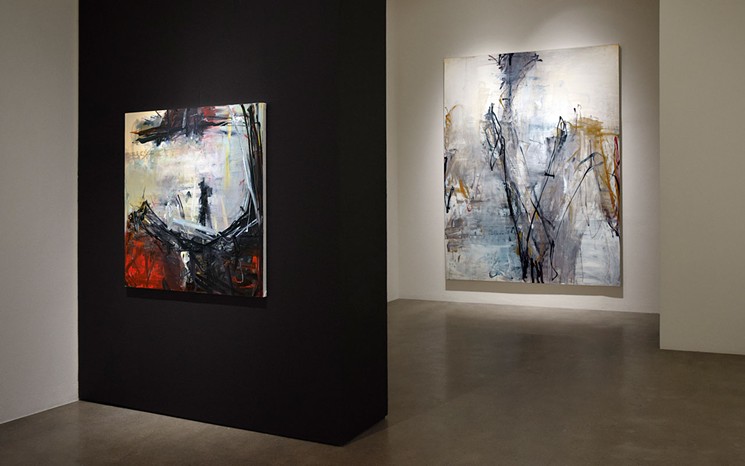 Tom Lieber's "Midnight Drop" (left) and "New Sprout" at Robischon Gallery.
Courtesy of Robischon Gallery
The solo creates a mood that could be described with the old phrase “the abstract sublime,” but sometimes clichés work, and that’s the case with these Lieber paintings. Maybe it’s their grand scale, or maybe the lines against fields, but for whatever reason, they remind me of Clyfford Still’s paintings. It’s not that the Liebers look anything like the Stills (all right, they do a little); it’s the vibe they exude. This is especially true of Lieber’s super-impressive, ten-foot-tall “New Sprout”: Even if it didn’t have that leading title, it would still suggest the landscape, in this case a tuft of grass on the plains. Against a ground in which other lines have been painted out or smeared over, there’s a tangle of vertical lines that runs up the middle. Part of this painting’s appeal is its utter simplicity contrasting with its epic size; looking at those middle marks, it’s possible to imagine Lieber jumping a little to get to the top. This is the masterpiece of the group, totally majestic. 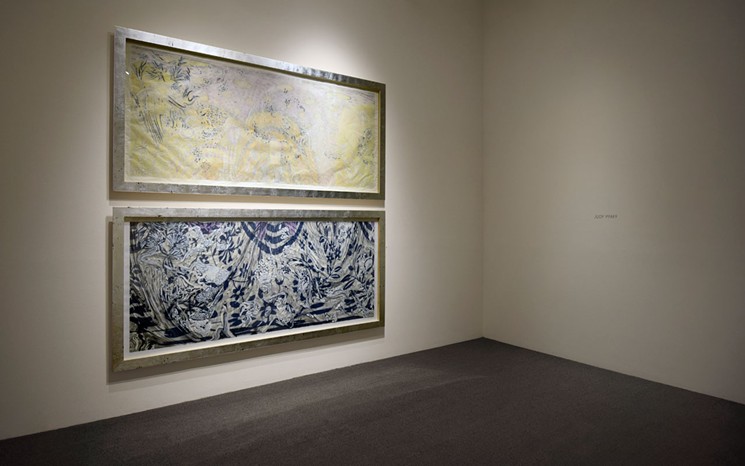 A pair of "Raga" prints by Judy Pfaff at Robischon Gallery.
Courtesy of Robischon Gallery
Robischon’s salute to abstract expressionism is somewhat broken by Judy Pfaff: Prints From the Raga Series, a small show in the viewing room dedicated to works on paper by a blue-chip artist. Judy Pfaff is best known as an assemblage artist who specializes in the enveloping installation. However, she has also transferred her more-is-more sensibility to prints, sometimes enormous ones. Although these prints include abstracted elements and the way the various parts are assembled is also abstract, there are too many recognizable things — flowers and plants, in particular — to classify her pieces as abstractions. The “Raga” prints look like expressive depictions of draperies or tapestries, complete with the rendering of the folds in the fabrics; across the picture plane are patterns of flowers. My favorite Pfaff in this solo is not a “Raga”-titled print, though. It’s “...And the Crane Thought…,” in which the artist uses colored silver leaf that flashes metallic under the lights and glows when they are turned off. Though also dominated by flower forms, this piece is much less representational than the “Raga” series.

A bounty of Denver exhibits this fall suggest that abstraction has replaced realism as the current art star, and these Robischon solos prove it.

Deborah Dancy, Gary Komarin, Tom Lieber and Judy Pfaff, through January 5, Robischon Gallery,1740 Wazee Street, 303-298-7788, robischongallery.com.
KEEP WESTWORD FREE... Since we started Westword, it has been defined as the free, independent voice of Denver, and we'd like to keep it that way. With local media under siege, it's more important than ever for us to rally support behind funding our local journalism. You can help by participating in our "I Support" program, allowing us to keep offering readers access to our incisive coverage of local news, food and culture with no paywalls.
Make a one-time donation today for as little as $1.