Review: Five Solos at Robischon Offer an Abundance of Abstraction

“Somewhere Out There,” by Kate Petley, acrylic and photo on canvas. Courtesy of Robischon Gallery
Robischon Gallery, the city’s flagship contemporary-art venue, is more like a small museum than a gallery. That’s not just because of its careful curation, but also its enormous size, which allows for as many as five full-blown exhibits at the same time, which is the number there now.

The series of sensitively interconnected solos begins with Amy Ellingson: Sweetbitter Beast, a collection of eye-popping paintings, prints and a closely associated installation, all of which display a deft assembling of disparate elements organized into all-over — or would-be all-over — compositions, like fresh takes on abstract expressionism. Ellingson’s painting process is an interesting combination of cutting-edge digital technology and age-old techniques. She begins on a computer screen, creating such basic shapes as lines and arcs with a drawing program, then arranges them until she arrives at the final sketch; the resulting shapes are reminiscent of letters or other symbols. She translates this ephemeral image into something lasting using oil and encaustic on panel, but the digital rendering is interpreted as opposed to copied. Ellingson has written that she’s very aware of the contrast of the speed of the digital phase and the time-consuming efforts needed to complete the painting phase. 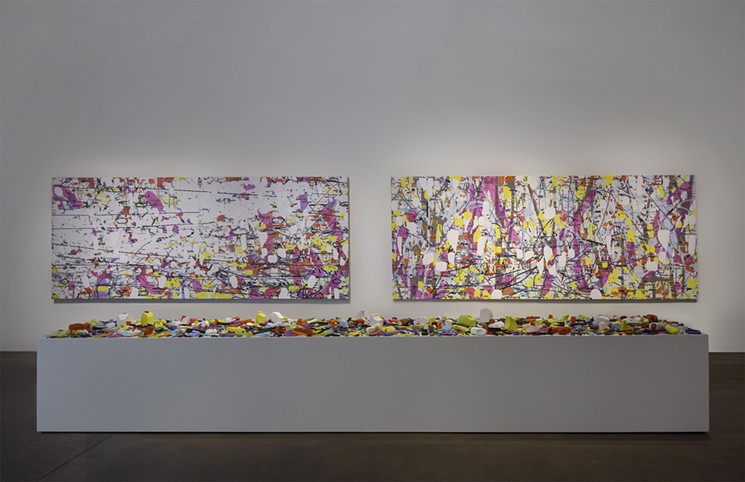 "Sweetbitter Beast," by Amy Ellingson, installation view.
Courtesy of Robischon Gallery
Though everything in the Ellingson show is well conceived and finely crafted, you can’t help but be drawn to the pair of enormous horizontal paintings, “Variation Part I” and “Variation Part II,” which have been hung side by side. Both have white grounds, with a predominating pink accented by black, yellow and lavender. At first they have a scribbled character, but as you look closer, this is apparently intentional, since the components appear to be floating at different levels below the surface: Coats of transparent encaustic were applied over the oil paint, which also lends the paintings their waxy glow. The installation “Variation: Artifact,” which is displayed on a long stand, is the perfect counterpoint to the paintings. The San Francisco artist has cast the shapes seen in the paintings in colored encaustic, turning them into three-dimensional objects.

Wall sculptures from Ted Larsen's "Act Naturally."
Courtesy of Robischon Gallery
In the connecting space that leads to the rest of the gallery is Ted Larsen: Act Naturally, made up of wall-relief sculptures that display the artist’s novel hybrid of constructivism and expressionism. Larsen, a New Mexico artist, uses scrap metal and repurposes not only the material, but the original colors found on it as well. Sometimes he uses contrasting colors, too, but many of these works are monochrome.

In “Toll Free,” a blocky yellow shape wraps around a smaller orange element; the sides are chamfered, which plays with perceptions of perspective. Larsen is always interested in altering space through the manipulation of perspective, but he really pushes it in a suite of unusual geometric abstracts, in which a cluster of hard-edged shapes are set into boxes that function as shadowbox frames, most of them carried out in a single color. Though these shadowbox sculptures are clearly non-objective, they give the sense of a stage set, with the mutated rectilinear constructions within the framework serving as the characters in a play and adding surrealism to the influences Larsen is channeling. They’re a little Joseph Cornell, a little early Giacometti and a little Donald Judd, all blended together into a totally new look that’s signature Larsen.

Violet, Gris and Camo,” by Marcelyn McNeil, oil on raw canvas.
Courtesy of Robischon Gallery
Ellingson and Larsen address abstraction in unexpected ways, as do the two shows on either side of the Larsen solo. But the style these artists are reinvigorating is not abstract expressionism or constructivism, but color-field abstraction in which color and composition are more or less interchangeable. Kate Petley: Repositioned, in the elegant window space, and Marcelyn McNeil: Lead Heavy Feather Light, in the larger back gallery, both feature simple yet bold abstractions that are so visually dazzling, they almost jump off the wall.

Petley’s works read as paintings, but they are actually collages moored by photographs that depict such mundane materials as cardboard, and they carry no narrative content. Rather than cut up found images, which is typical to collage, she takes the unorthodox approach of making her own materials in the form of photo-based imagery. Her painting is also unorthodox: The photos are digitally printed onto the canvases and then she adds painted elements, but it’s essentially impossible to distinguish where the photos leave off and the paintings start up. In the spectacular “Somewhere Out There,” a slightly tilted black triangle with its narrow point at the top edge is the predominant formal element. Its diagonal sides and flat bottom become the guides for the margins and angles of the other colors. On the right edge of the picture, partly surrounding the black triangle, is a luscious red; on the left, a photo-gray quadrangle with a coral shade that fades to orange, below and adjacent.
Petley’s pieces have an illusionistic quality, as seen in “To Belong There,” which displays forms with soft margins. But this piece has a harder take on the shapes, which are more tightly articulated than usual, and the slightly tweaked approach really works.

"Corona," by Katy Stone, oil on aluminum.
Courtesy of Robischon Gallery
McNeil’s paintings are lyrical, with something of Helen Frankenthaler’s lightness and simplicity, as well as her dreamy palette. A younger generation of women artists have rediscovered the work of the abstract-expressionist master. But McNeil’s paintings also have a graphic quality, and the compositions are simple and easy to read. In a number of them, such as the striking “Violet, Gris and Camo” and the equally impressive “Orange on Pink,” McNeil approximates symmetry, with the center of the compositions bracketed on either side by twinned colored bars. They have a figural quality and evoke the female nude — broadly speaking, anyway, since they are actually a small set of basic shapes. Interestingly, McNeil stained the pigments onto raw canvases for these specific pieces, a radical method that Frankenthaler developed over sixty years ago.

The last of the quintet of single-artist shows is Katy Stone: Transmissions, installed in the intimate viewing room. Stone sometimes works in laser-cut aluminum that’s been painted, and her forms have a naturalistic flavor, as though they were clouds, topographical lines or flames. They are set out from the walls so that the shadows they cast with their irregular profiles become major components of the compositions. One of the most ambitious is “Corona,” in which a circle representing the sun is partly described by Stone’s rendition of flames rising off the surface of the fiery sphere. These flames are conveyed through a two-layer construction, with a complex set of jagged shapes painted yellow against the wall and smaller though similarly shaped elements left in polished aluminum mounted on top of that. The top layer is pierced, so that you can see the yellow structure underneath in places.

Abstraction has been making a major comeback this spring, and shows such as these just add to the momentum.

Ellingson, Larsen, McNeil, Petley and Stone through July 14, Robischon Gallery, 1740 Wazee Street, 303-298-7788, robischongallery.com.
KEEP WESTWORD FREE... Since we started Westword, it has been defined as the free, independent voice of Denver, and we'd like to keep it that way. With local media under siege, it's more important than ever for us to rally support behind funding our local journalism. You can help by participating in our "I Support" program, allowing us to keep offering readers access to our incisive coverage of local news, food and culture with no paywalls.
Make a one-time donation today for as little as $1.