Go back before concerts and movie theaters reopened. Before vaccines were shot into arms. Before Biden took office. Before Facebook and Twitter gave Trump the boot. Before the insurrection and fears of civil war and the death spike from November to January. Before the election and the spiteful partisan debates and that time a fly made its home on Mike Pence’s head. Before the summer wildfires choked us until we fled indoors, before the protests against murderous cops, before the massive job loss as the pandemic spread through the United States.

There was a brief moment in 2020 — after the shutdowns and before a year of constant opposition against whomever we might despise — when we breathed and believed we might come together to care for each other, put ideological squabbles aside and embrace our shared humanity.

In April 2020, visionary Denver artist Ryan Foo of the Black Actors Guild was out for a late-morning walk, pushing his new baby in a stroller, trying to give the infant a break from being cooped up and quarantined. The day was beautiful.

“It was still at the beginning of the pandemic, when there was a sense of, ‘Oh, we're all taking care of each other,'" Foo recalls. "Full-on desperation hadn't quite set in. And I just sat down in front of this beautiful garden and had this — like how all artists express — this feeling that welled up in me. And I just wanted to write something. And I did. And I put it on Facebook, the medium of the day.”

His sci-fi prophecy went like this: When the quarantine was finally lifted on August 21 of that year, the world had become a kinder place.

“A very strange and very beautiful flower arose from the muck of despair," he wrote. "Its nectar was both sobering and beautiful. It was evolutionary and ancient. It was the catharsis that our world needed — a slap in the face to remind us that we’re in this together. All of us.”

He imagined a global transformation. Essential workers were valued for keeping the world provided with food and electricity. Artists were elevated, the playing field between individuals and corporations was leveled, and creatives worked from home, bringing inspiration to all. With hoarding abolished, people realized that they had more than they needed to survive. Government was replaced by systems of mutual aid, and the rush for profit and competition ended.

“You see, the world was just unwilling to give up living,” Foo wrote. “And when folks were pushed to build new systems to survive, their growth was exponential — thriving on the nutritious, decaying flesh of our bloated, capitalist system.”

Foo imagined himself standing outside, watching his community discuss what flag would symbolize the moment. “I think we’re going to land on a heart,” he concluded. “And I’m hopeful.”

Denver artist Mar Williams, whose circle had been orbiting Foo’s for years, read the post. “Mar hit me up and said they wanted to consider what a comic strip using those words looked like,” Foo recalls.

Together they created a zine called Somehow, Everything Worked Out.... Williams printed it on a hand-me-down press, which has since been donated to Mutiny Information Cafe for the community to use. They shared the prophetic comic with a couple thousand friends and acquaintances, and their vision of this new world spread.

Both artists say they found inspiration in the writings of Buckminster Fuller. Toward the beginning of the pandemic, Williams had painted a mural on the wall of Mutiny with the quote “Dear reader, traditional human power structures and their reign of darkness are about to be rendered obsolete.” Mar Williams's mural outside Mutiny Information Cafe.
Kyle Harris
Foo was moved by Fuller’s notion that if you split up the average wealth of the planet on an annual basis, every single person would have ample wealth to thrive.

“Just think about what our fucking lives would be like if we just shared,” he says. “I do think there is a thread that ties together so many different issues today — I think that's part of what the piece tries to allude to — that everything from police brutality to LGBTQ rights to sex workers...there's a thread of humanity, which all of these issues are attempting to weave together in a kind of utopian way.”

Long before COVID-19, Williams adds, many people struggled with oppression: “Then the pandemic happened, and there's this hopefulness to it that, like, people were gonna wake up a little bit. Okay, if this hits everybody, they're all good. It's gonna be flat, and everybody's gonna kind of see it. As time went on...we got a little bit of pulling the curtain back and people being able to see how other people live and maybe how they're being pushed down.“

At the time, Williams hoped that people would help each other out economically, build networks of community care. And there was a blink of that before people began to rip each other apart again. But by the time the pandemic lifted, many had embraced cutthroat capitalism as usual. Spectacle returned. Demonstrations fizzled out.

Foo has been unsettled by "the capitalist apparatus and, frankly, more and more for me, the white neo-liberal take on patching things up and doing just enough to get by and telling people 'to shut the fuck up and sit down.' It's disappointing," he says. "And it feels like the greatest barrier, to me is not racists and terrible billionaires, but the people who are just comfortable enough, just happy enough to say, 'Well, why do we need that utopian vision? We can all just go to McDonald's, and it's fine.'" 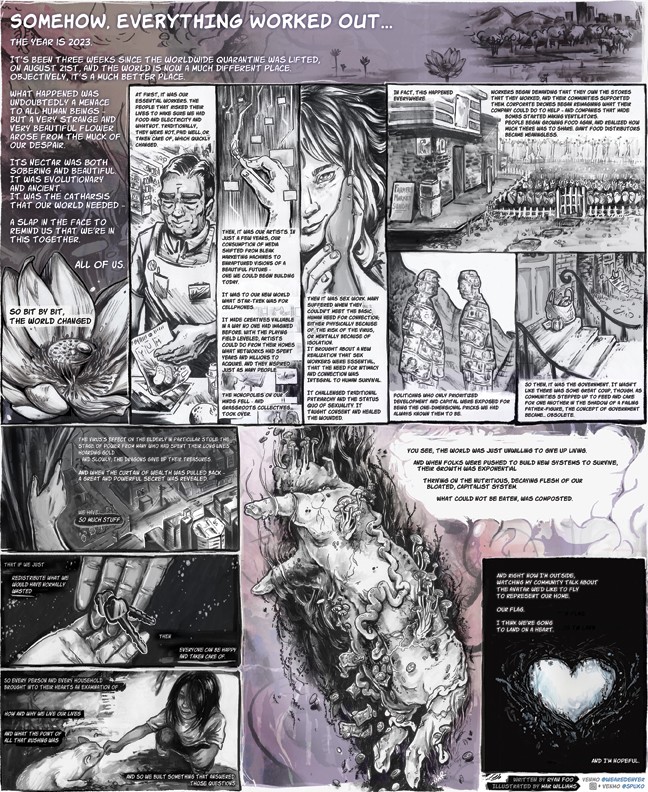 One answer has been preserved through art, says Foo, noting that it memorializes that sense of possibility that many have forgotten.

“We are terribly temporal, humans,” he explains. “We are caught up in time awfully, awfully often. And we just kind of forget what's happened and how to learn our lessons or what looking into the future gave us. And I think that the power of art — one of the powers, the many powers of art — is the ability to remind us, to serve as a kind of library of vision.”

Yet Williams, whose work often embraces dystopian elements, also acknowledges not always feeling so visionary. Artists don’t just summon up a better possible future. Sometimes they’re also caught in the grind, rushing to the next corporate gig, keeping food on the table.

Ryan Foo and Mar Williams, a year after writing their zine.
Kyle Harris
“It gets kind of hopeless in there,” Williams says, but the pandemic put the dystopian hustle — and paid gigs — on hold. “For a minute, everybody was on pause, and I was like, ‘Yeah, this is the thing to do. This is what I want to do, you know, and I want to go print out big posters and wheat-paste places and whatever. That was really cool. And it's rare that I get to have moments like that.”

Even if capitalism is supplanted, neither Foo nor Williams sees the future as some blissed-out, perfect place without struggle. They have no illusions that the world will be unblemished.

But artists, Foo insists, do have the power to dismiss outright cynicism and preserve a sense of humanity.

“Let's try and just imagine what we could have, what we want and what it could feel like, what the experience could be like,” he says. “And then everyone gets a micro-taste of that experience in the art, and we all work collectively toward that place we’ve all felt together before."

For Foo, progress toward something better for humanity is the point of creation.

“I think that's the great work of creativity,” he says. “It’s to envision a future that does not yet exist.”

Learn more about Foo at ryanfoo.org and Williams at ihate.art.
KEEP WESTWORD FREE... Since we started Westword, it has been defined as the free, independent voice of Denver, and we'd like to keep it that way. With local media under siege, it's more important than ever for us to rally support behind funding our local journalism. You can help by participating in our "I Support" program, allowing us to keep offering readers access to our incisive coverage of local news, food and culture with no paywalls.
Make a one-time donation today for as little as $1.