Senga Nengudi’s “Masked Taping,” photographic triptych. Denver Art Museum
Conceptual artist Senga Nengudi is one of the few internationally famous artists who lives in Colorado. That makes Senga Nengudi: Topologies, a survey of her forty-year-long career, a natural choice for a show at the Denver Art Museum. Interestingly, the exhibit itself didn't originate here; it was organized in Munich by Stephanie Weber at the Lenbachhaus.

Though Nengudi has been based in Colorado Springs for years, she was already famous when she moved there, having established her lofty reputation in Los Angeles and then in New York. She emerged as a prominent member of the Black Arts Movement of the 1970s that flourished in Southern California and was associated with the legendary Studio Z artists active then and there. Nengudi had studied dance along with visual art, and incorporated both into performances with David Hammons and Maren Hassinger as well as artists from Studio Z. The exhibit at the DAM will include documentary evidence of these ephemeral events.

While those early performances gave Nengudi serious vanguard cred, her greatest accomplishments are her sculptures. Her "Water Composition" series, which comprises transparent shapes filled with colored water, evokes shapeshifting. Expanding on that, she developed her "R.S.V.P." series, her best-known work. In these pieces, Nengudi uses pantyhose, typically stretched into tight tensile forms and sometimes filled with sand, to create installations that suggest the idea, if not the shape, of the human body. The sculptures of the R.S.V.P. series are sometimes used in association with dancers, reconciling sculpture and performance, two of Nengudi's keenest interests. 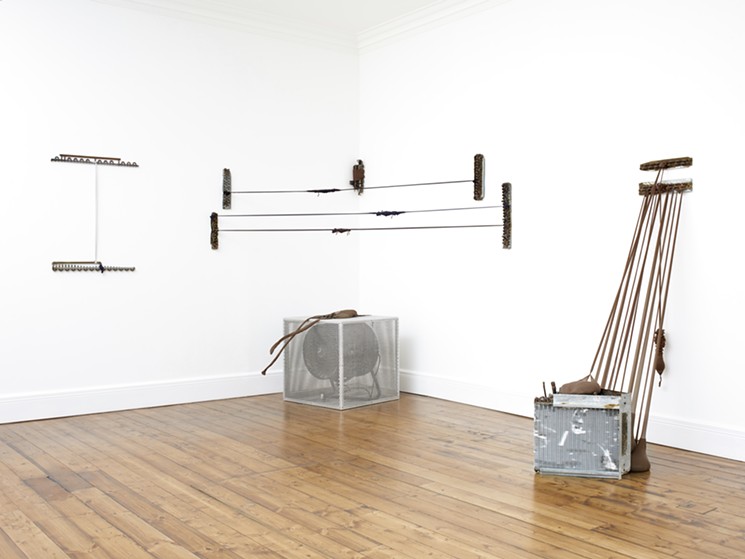 “A.C.Q. I”, Senga Nengudi, multimedia installation.
Denver Art Museum
The works from the A.C.Q. series, which were shown at the Venice Biennale in 2017, also explore the concept of materials in tension and include found objects. One of these installations was recently acquired by the DAM and will be included in the retrospective, as will the photographic triptych “Masked Taping,” which documents a performance.

Rebecca Hart, the DAM’s Modern and Contemporary curator, chose these pieces to add to the permanent collection at the museum, and she will oversee the show on its stop here in town. Soon after coming to Colorado in 2015, Hart sought out Nengudi, and since then has developed a friendship with the artist.

“My art responds to being Black, being a woman and being of a certain age,” Nengudi has written regarding the upcoming exhibition. “Artworks you’ll see on display represent someone who has had children, cared for her mother and experienced many of the things life has to offer.”

This major exhibit will be mounted in the extensive set of spaces in the Gallagher Gallery on the first floor of the Hamilton. Entry to Senga Nengudi: Topologies will be included with general admission; however, because of COVID-19 concerns, viewers will need to purchase a timed and dated ticket on the DAM website in order to see it. The show will not open until December 13, but there's an opportunity to get a better understanding of Nengudi's oeuvre and interests much sooner than that: The artist will present a Logan Lecture at 6 p.m. August 11. The event will be held remotely; to register, go to the DAM website.
KEEP WESTWORD FREE... Since we started Westword, it has been defined as the free, independent voice of Denver, and we'd like to keep it that way. With local media under siege, it's more important than ever for us to rally support behind funding our local journalism. You can help by participating in our "I Support" program, allowing us to keep offering readers access to our incisive coverage of local news, food and culture with no paywalls.
Make a one-time donation today for as little as $1.