Spectra founder Sadie Young (with fiance Alex Clifford) at Spookadelia. Dan Roberts
Art is always important, especially when it goes beyond the limits of theoretical meaning and benefits something more down to earth. And that's exactly what you'll find at Spectra Art Space on Saturday, December 10, with the show Tiny Art Big Ideas, which runs through February.

It all began with a simple Halloween show back in 2017 — just a quick idea to host a bunch of artists using a tiny-art theme. “It was just for fun,” says Sadie Young, owner and founder of Spectra. At the show, artists supply objects of any type and medium; the only limitation is that the works can’t be larger than 6” x 6” x 6”.

But the exhibition evolved into something more meaningful after Alex Morgan, who worked closely with Spectra, took his life in 2018. Young remembers first meeting Morgan when he came to Spectra not too long after the gallery opened its doors in January 2017. “Alex would do one-night pop-up events with art and music," Young recalls, "all to support suicide awareness and prevention.” 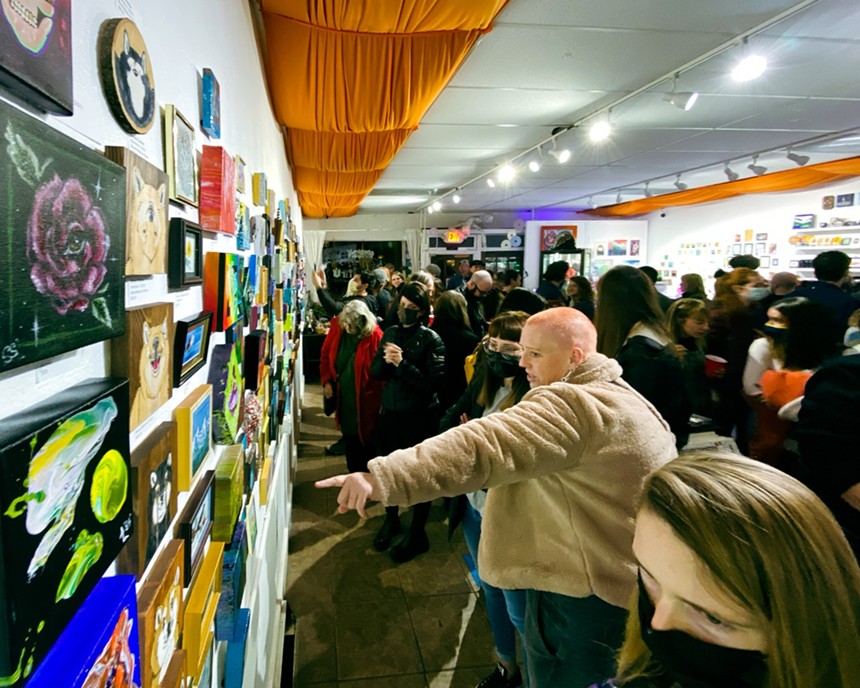 Patrons choose their favorite tiny works.
Rick Knight
Such events aligned perfectly with what Spectra Art Space was designed to be. “It was envisioned as a place where people who were hosting their first events could come,” Young explains. “We were all growing and developing together, at the same time.”

And Morgan was a big part of that growth. “He brought in some pretty major artists,” Young reflects. “It was impressive. I loved having those events — they brought a lot of cool people to the venue. And he did it all under the name Team Love Life. That was his mantra, in a way. A reminder, maybe. You do love life. You want to love life. He even made these little pins with an elephant and the hashtag Team Love Life.

“And then one day I got the call saying we’d lost Alex,” she says. “He’d taken his own life.”

Losing Morgan, especially to the suicide epidemic that he fought so hard against, came as a blow. “It shook all of us. This was someone who was a big advocate for suicide awareness,” Young remembers. “And sadly enough, it only took one day of being alone, with the wrong tool, to take him away.”

Young knew she wanted to do something, and so she, Morgan’s mother and his friends decided to hold his memorial at Spectra. Soon after, Young had the idea to hold a tiny-art show in Morgan’s honor. “In my mind, it was all about the little things,” says Young. “The little things in life that are worth living for. Do stuff that makes you happy. I wanted it to be any artist, no matter what age, no matter how much experience they had. They could make anything they wanted — it just had to be small.”

While the event is free to attend, donations are encouraged, with all proceeds going to charity; artists can choose whether they want all proceeds or just a portion of their sales to go to the charity. For the first couple of years, Young worked with some of Morgan’s friends, who handled where the proceeds went. But by the time Young began organizing for the show's 2021 return after a pandemic hiatus, Morgan's friends were busy with their own family lives, leaving Young to find a suitable charitable organization.

She knew she wanted something local, so representatives from the organization could physically attend the event. She wanted something vetted, so she could trust the money was going to the right people and places. And she wanted something in keeping with Morgan’s focus on youth. “All of that came together with Second Wind,” Young says. The Second Wind Fund, which works to prevent youth suicide by connecting children and teens with licensed therapists, will have Spectra's support again with the upcoming show. 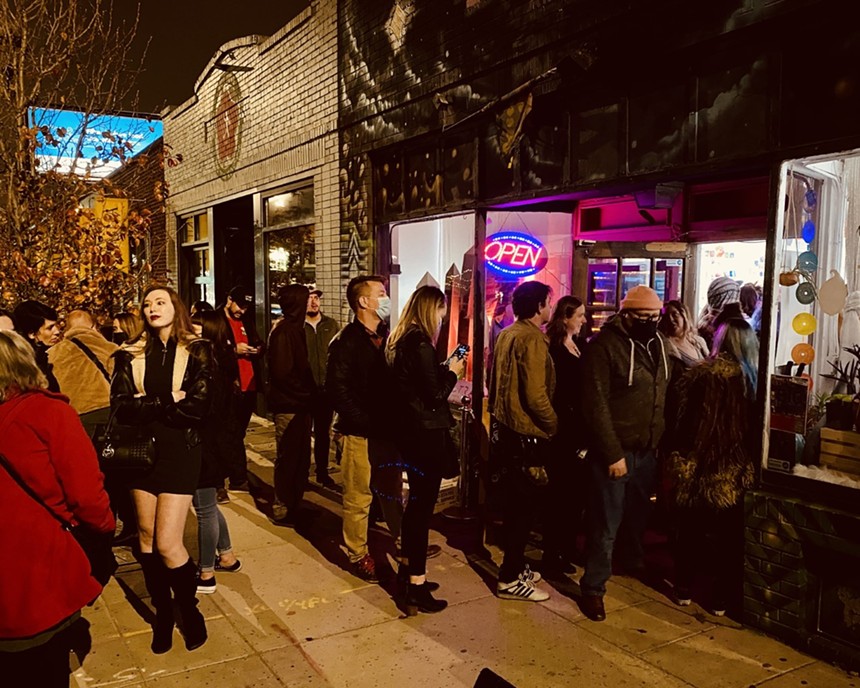 A line to get into last year's Tiny Art Big Ideas.
Rick Knight
Tiny Art Big Ideas has grown precipitously over the years — more than 170 artists are signed up to show their work in this year’s event. Young attributes its popularity in part to its smaller artistic scope. “It’s an obtainable goal, you know?” asks Young. “We only posted about it twice, sent out a couple of emails, and the numbers have just been amazing.”

But it’s not just the medium that Young credits with the appeal of the show. “Every year we do it, so many of the artists who join the show who say how important it is to them personally, how impactful it is,” Young says. “It’s meaningful to them because they also lost somebody or they struggle with it themselves. It became something that was important for me to keep going — not just to pay tribute to Alex, but because so many people love it.”

Saturday marks the show's fourth iteration, starting with an opening reception from 5 to 10 p.m. in Spectra's gallery at 1836 South Broadway. There will be free drinks provided by Ratio Beerworks, live music by Furbie Cakes, giveaways and more. In addition, anyone donating $15 or more will also get free access to Spectra's immersive art experience Spookadelia, an annual, narrative-driven display of spooky, psychedelic kitsch.

This year’s Tiny Art Big Ideas is being held a little later than usual, but Young is just glad to get it in under the wire for 2022. “The holidays can be really, really hard for a lot of people,” says Young. “My hope is that people can find joy in the little things, find joy in the community, know that there are other people out there that struggle, too. That they’re not alone.”

Tiny Art Big Ideas opening reception, 5 to 10 p.m. Saturday, December 10, Spectra Art Space, 1836 South Broadway. All donations go to the Second Wind Fund. The show runs through February.
KEEP WESTWORD FREE... Since we started Westword, it has been defined as the free, independent voice of Denver, and we'd like to keep it that way. With local media under siege, it's more important than ever for us to rally support behind funding our local journalism. You can help by participating in our "I Support" program, allowing us to keep offering readers access to our incisive coverage of local news, food and culture with no paywalls.
Make a one-time donation today for as little as $1.