First Look: Spookadelia Is the Immersive Show to See This Season 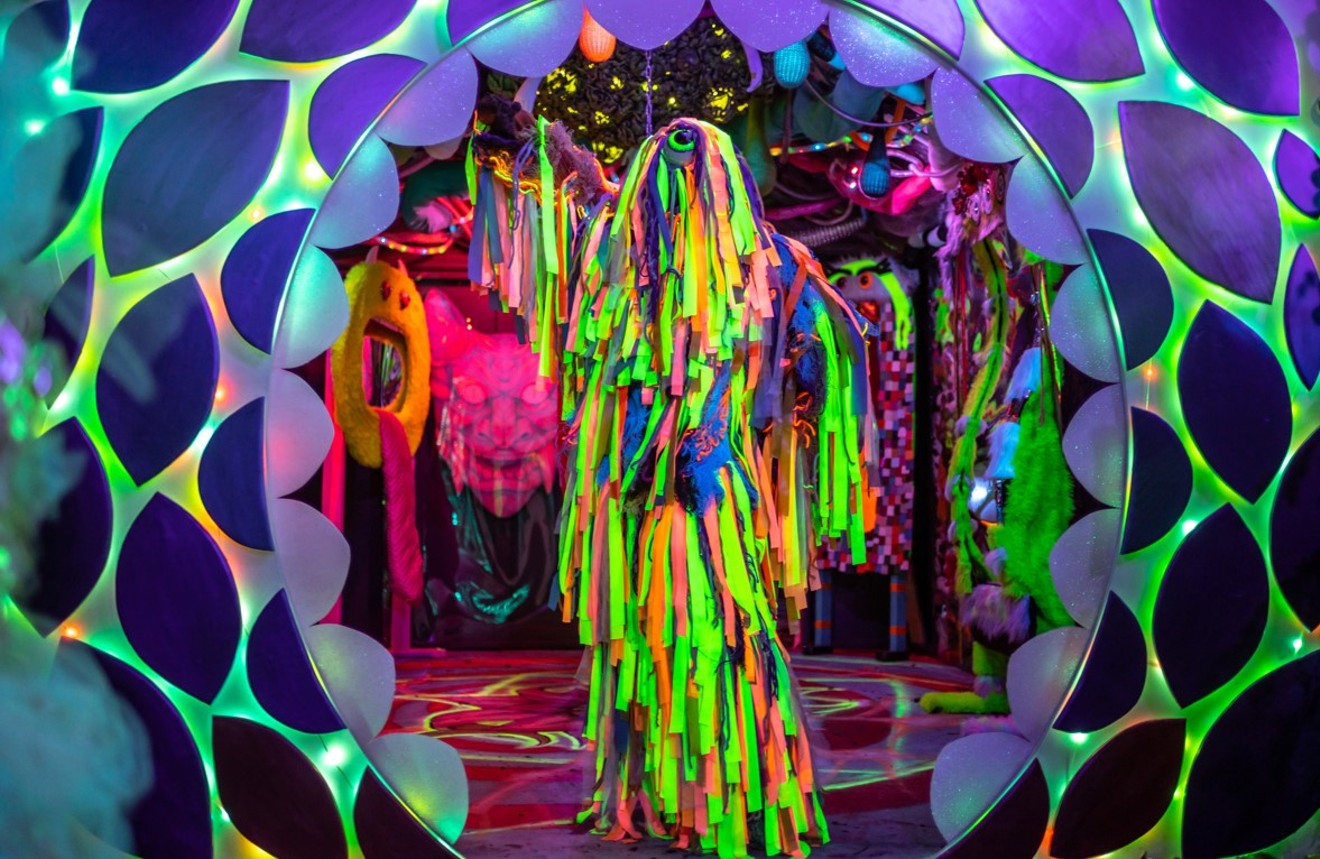 Timothy Johnstone
Some people write down their sci-fi fantasies. Spectra Art Space owner Sadie Young brings them to life, with narrative-driven immersive installations that put visitors at the center of the story.

The fifth iteration of Spookadelia, Spectra's annual immersive display, is a psychedelic exploration of dreams, Jungian philosophy and spooky kitsch, designed and created by Young working with a variety of local artists, some of whose work can also be seen at Meow Wolf's Convergence Station.

Spectra has been a leader in Denver's growing immersive arts scene since Young opened the gallery in January 2017. She was inspired by the installations she had seen at music festivals over the years, and was particularly attracted by the interactive aspects that can convey the works' messages to the viewer. In the beginning, Spectra would simply mount a small installation at every art show it hosted, but then Young decided to expand into the backyard space in order to create an even larger experience with Spookadelia, which debuted in October 2019 and had a second iteration that December before settling into its annual schedule.

"This was before everyone knew what immersive art experiences were," Young notes. "We were just like, 'Let's do a psychedelic haunted house!'"
click to enlarge 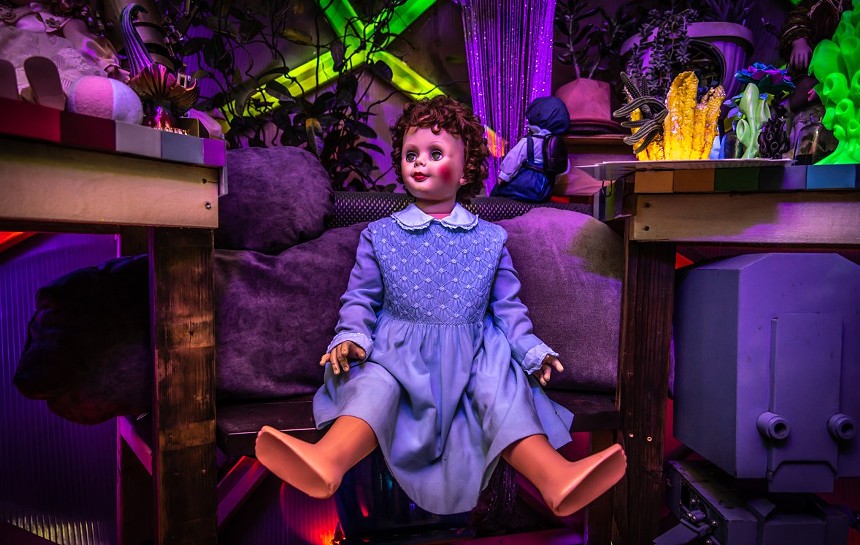 The annual installation has been a success from the start, expanding on its narrative each year. The basic story centers on Novo Ita, a sci-fi world far off in the future. (Spectra also creates summer immersives around this place.) "Novo Ita means 'the new way,'" Young explains. "It's inspired by the science-fiction genre of solar punk, which is a hopeful vision of the future. [In our story], something bad did happen first, but then all the people who came out of it are so understanding with each other and good with the planet."

The ethos of Novo Ita is showcased in the installation's ethereal atmosphere and in the materials used to create it, the majority of which are recycled. While last year's Spookadelia had guests working to lift a curse that fell on Novo Ita, the emphasis of this year's show is on a more conceptual topic, one that fascinates Young: dreams. Visitors will find themselves within the dream of a Novo Ita citizen who has been cursed into a deep sleep, and the only way to wake her up is to discover her name.

"I was trying to think of some way to have a mission or a puzzle for the story to unfold," Young says, "and I was just driving one time with no music on, and I was like, 'Oh, my gosh, this is what we're gonna do. People have to figure out her name.' Because I personally don't remember people saying my name in a dream. I feel like if somebody did, then I might wake up. So I thought that would be a really cool way to do it, because then people can just travel through a story looking for something, because that's always fun — like a scavenger hunt."

Before she changed her major to arts at Metropolitan State University of Denver, the Mile High native was studying psychology, immersing herself in the philosophy of Carl Jung, who famously postulated on dreams and the subconscious. But she had been fascinated by dreams for as long as she could remember. And while she was in college, Young discovered that something she'd been doing since she was a child was actually a feat that many people practice for years to accomplish: lucid dreaming. 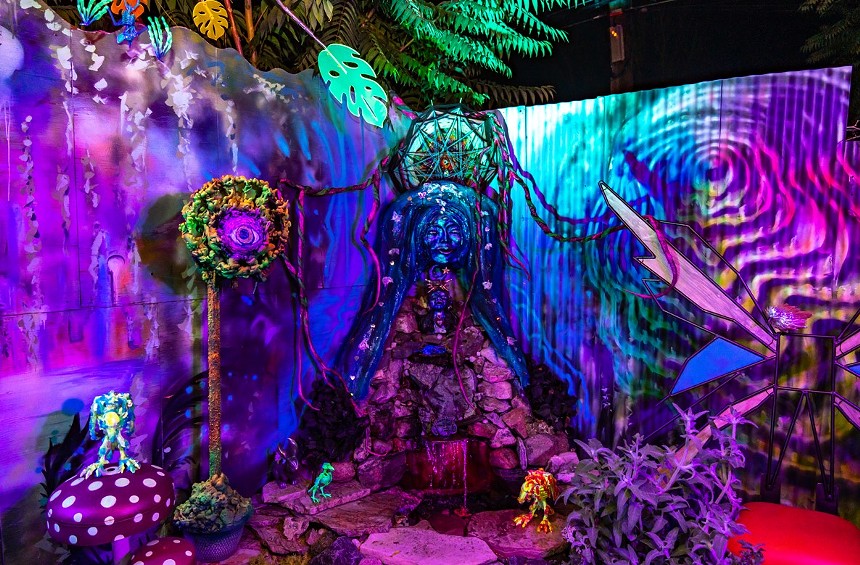 Timothy Johnstone
Visitors will uncover the plot of the installation by scanning QR codes found throughout the show, often placed among brightly painted eyes. Such recurring features are also meant to indicate that the visitors are walking through a dream, Young explains.

"There are people who talk about common themes in dreams, or seeing something repeat itself. That can be a powerful thing that you would really want to dive into. If you have a common symbol or something popping up in your dreams a lot, you'd probably want to keep working on figuring that out," Young says. "And so the eyes found throughout this are meant to represent that. There are so many different versions of them, and it kind of plays with that sense of kitsch, but they're not super-kitschy eyes all the time. There are all kinds of different eyes as you go through.

"The fun thing about having an immersive based around dreams is that...everyone's are so different, but there are common threads because of the collective unconscious," she adds.

Jung's philosophy is also found throughout the installation. "I think one of the most powerful things that [Jung] says is that it's important to listen to them...and be humble in the face of your dreams," Young says. "There's a lot of freedom there for the imagery, which is fun, especially for artists." 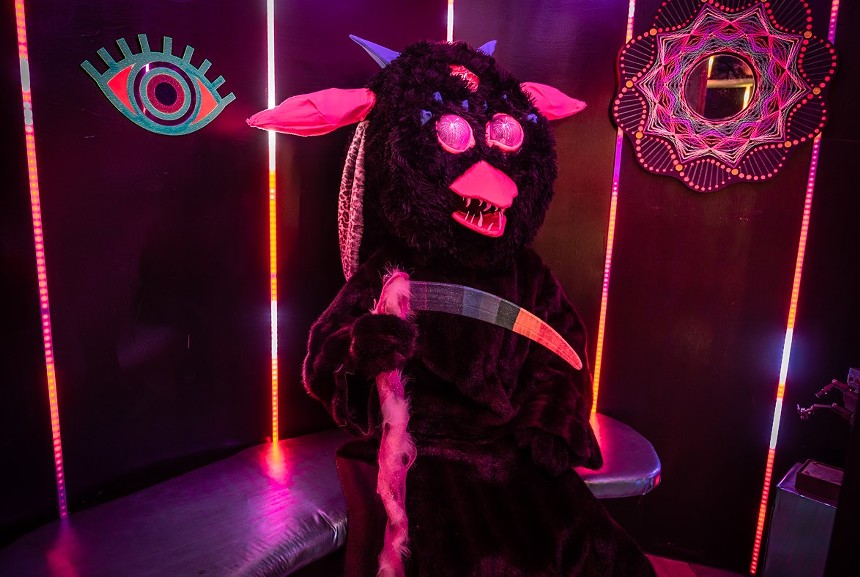 A Spectral Specter.
Timothy Johnstone
In a room at the back of the installation, for example, you pull back a curtain to find yourself in a dome accompanied by a demonic, Furby-like creature called a Spectral Specter, which is responsible for cursing the Novo Ita citizen. Next to the entrance is a switchboard that activates lights, music and video in the room. Quotes from Jung are spoken in a robotic voice as the creature begins dancing, before the scene comes to a startling halt.

"I had somebody come in that was like, 'I just sat in that back room and I listened to the video. ... I just kind of sat there and had so many realizations all at once about myself.' And that's amazing. He didn't even say anything about the Spectral Specter who was dancing around," Young recalls. "Different people leave with different messages, or people just have fun."

And there's plenty to have fun with. Costumed characters roam the installation and provide a few good shock scares. A room directly across from the Spookadelia entrance is a funhouse decorated with warped mirrors rendered into fuzzy, adorable monsters. A cushy cave of swirling fabric has icy walls with hollowed-out stalagmites that carry kaleidoscopic lasers within, as well as an augmented-reality activation. Another room is filled with old dolls (most of whose eyes you cannot see, which Young says is part of the plot) harvested from Young's late grandmother's collection, as well as a fortune teller that gives you your unique fortune along with a spirit animal. More interaction is found in a dome with bumblebees on the ceiling, whose wings will flutter when visitors tap on a small steel drum. 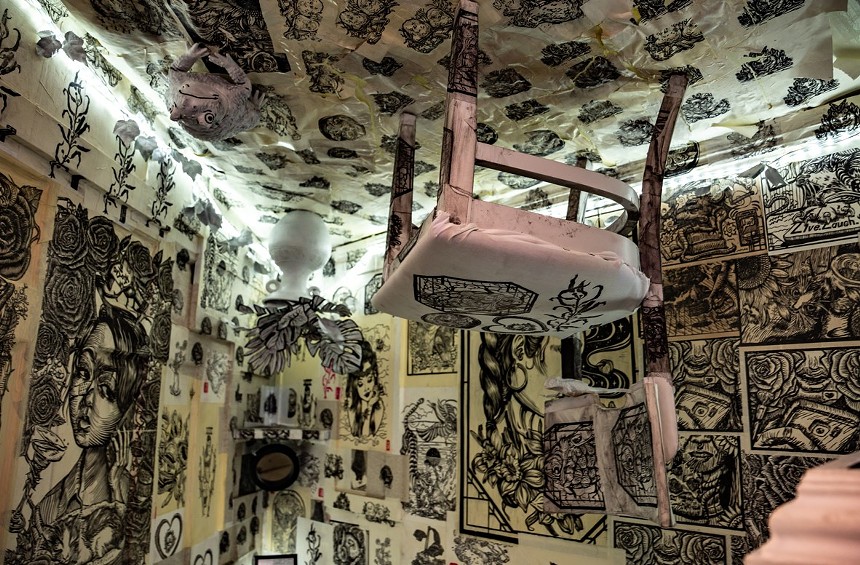 Timothy Johnstone
The bedroom of the Novo Ita citizen whose name you must uncover to pull her out of a dream is flipped completely upside down, a move that Young says was made to further reflect the subconscious in dreams. "A lot of people have dreams where they see someone or something they know, but it looks completely different in your dream, [but] you still know what it is," she explains. "You kind of just know that it's that person, but it might not look like that person. That's why we flipped her room totally upside down, and that's how I decided who the character was going to be and what name we were going to use. We have the story unfold where it's like, 'I kind of remember this place, but it seems different. I used to like spending time here, but what is this place?'"

Denver is filled with immersive art this season, but Spookadelia should be at the top of your list. With its philosophical plot, scavenger hunt and detailed art, visitors will find themselves reflecting on their own relationship to their dreams and subconscious.

"I want [Spookadelia] to be a hopeful, inspiring thing. It's supposed to be spooky for Halloween, and I think we accomplish that with a lot of the characters and some little spooky elements," Young says. "For this one, I really tapped into my psychology background, because I think that's powerful. Even though it's kind of spooky stuff, it's a hopeful thing...if you can get through."

Spookadelia: The Wakening, through January 3 at Spectra Art Space, 1836 South Broadway. Tickets are $20-$25.
KEEP WESTWORD FREE... Since we started Westword, it has been defined as the free, independent voice of Denver, and we'd like to keep it that way. With local media under siege, it's more important than ever for us to rally support behind funding our local journalism. You can help by participating in our "I Support" program, allowing us to keep offering readers access to our incisive coverage of local news, food and culture with no paywalls.
Make a one-time donation today for as little as $1.
Emily Ferguson is Westword's Culture Editor, covering Denver's flourishing arts and music scene. Before landing this position, she worked as an editor at local and national political publications and held some odd jobs suited to her odd personality, including selling grilled cheese sandwiches at music festivals and performing with fire. Emily also writes on the arts for the Wall Street Journal and is an oil painter in her free time.
Contact: Emily Ferguson