St. Patrick's Day in Denver: It's Not Easy Being Green

Jacqueline Collins
Denver once prided itself on being one of the best cities in the country for St. Patrick’s Day celebrations, with a parade rumored to be the second-largest in the nation, which marks its 57th anniversary this year with the theme "Share the Luck."

But Denver didn't get lucky with WalletHub, that prime purveyor of factoids, which recently announced its “Top 20 Cities for St. Patrick’s Day” — and this town didn't even make the cut. We can understand falling behind Chicago, Philadelphia and Boston, with their large Irish communities, but how does the relatively small burg of Naperville, Illinois, rate fifth? And how was the Mile High City edged out by Overland Park, Kansas, which clocked in at a respectable nineteenth? Denver finally shows up a sorry thirtieth.

Maybe the problem is this city’s emphasis on good craft beer, which could mean that Denver doesn’t enjoy the same 819 percent increase in Guinness consumption on St. Patrick’s Day that the rest of the country does. (According to wallethub.com, 152.5 percent more beer is sold overall.) Or maybe it’s that while, on March 14, the city will again paint a green stripe along the parade route and turn Blake Street into Tooley Street for the celebration, few current residents remember the late Dale Tooley, longtime Denver district attorney, who left politics after losing the 1983 mayoral race to Federico Peña.

Despite Denver’s sad WalletHub showing, however, residents will be out in force on Saturday, March 16, when the annual St. Patrick’s Day Parade starts off at 9 a.m. at 20th and Blake/Tooley streets, then winds its way past an assortment of bars where many of the parade participants will be found drinking later that day...and no doubt the next. 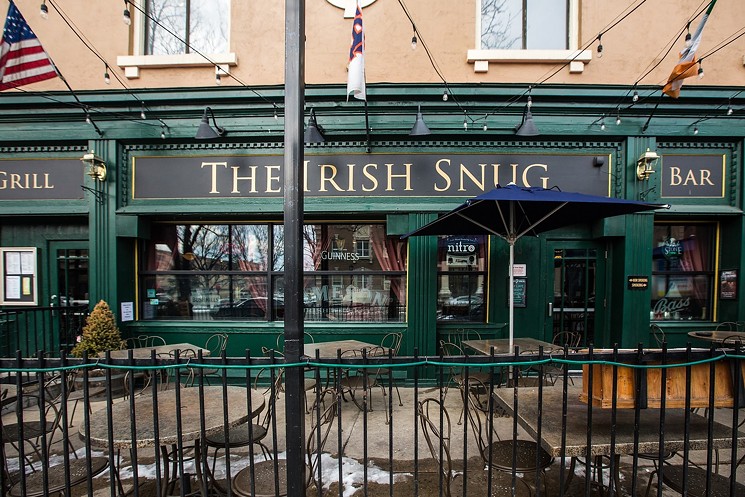 One of Denver's big St. Patrick's Day celebrants.
Danielle Lirette
Denver's first St. Patrick's Day Parade was in 1889, and for many years was coupled with a Grand Ball. But in 1921, both disappeared from the calender, until the parade was resurrected in 1962, then made official the next year. And it's been marching through downtown ever since.

Undeterred by the Wallethub snub, Denver City Council issued a proclamation on behalf of the 57th anniversary of the parade, which has always been run by volunteers, on March 11. "We hope for a warm wind at our backs as we celebrate the Irish culture in the great state of Colorado," it proclaims.

And the celebration won't end with the parade. Those celebrants who’ve skipped the bars — or at least sobered up — can join in the 31st annual Runnin’ of the Green, a 7K charity run that starts in front of Union Station at 10:15 a.m. on Sunday, March 17 (registration opens at 8 a.m.). Find out more at rotg.org.

Finally, a consolation prize, so you won't be crying in your green beer: In its list of "Best Places to Go for St. Patrick's Day," vacationrenter.com rates Denver at fifth, citing not just the parade, but such "authentic Irish pubs" as Scruffy Murphy’s, the Irish Rover and Pints Pub.

We've served up our own photos of ten notable Irish pubs in town; see it here.
KEEP WESTWORD FREE... Since we started Westword, it has been defined as the free, independent voice of Denver, and we'd like to keep it that way. With local media under siege, it's more important than ever for us to rally support behind funding our local journalism. You can help by participating in our "I Support" program, allowing us to keep offering readers access to our incisive coverage of local news, food and culture with no paywalls.
Make a one-time donation today for as little as $1.