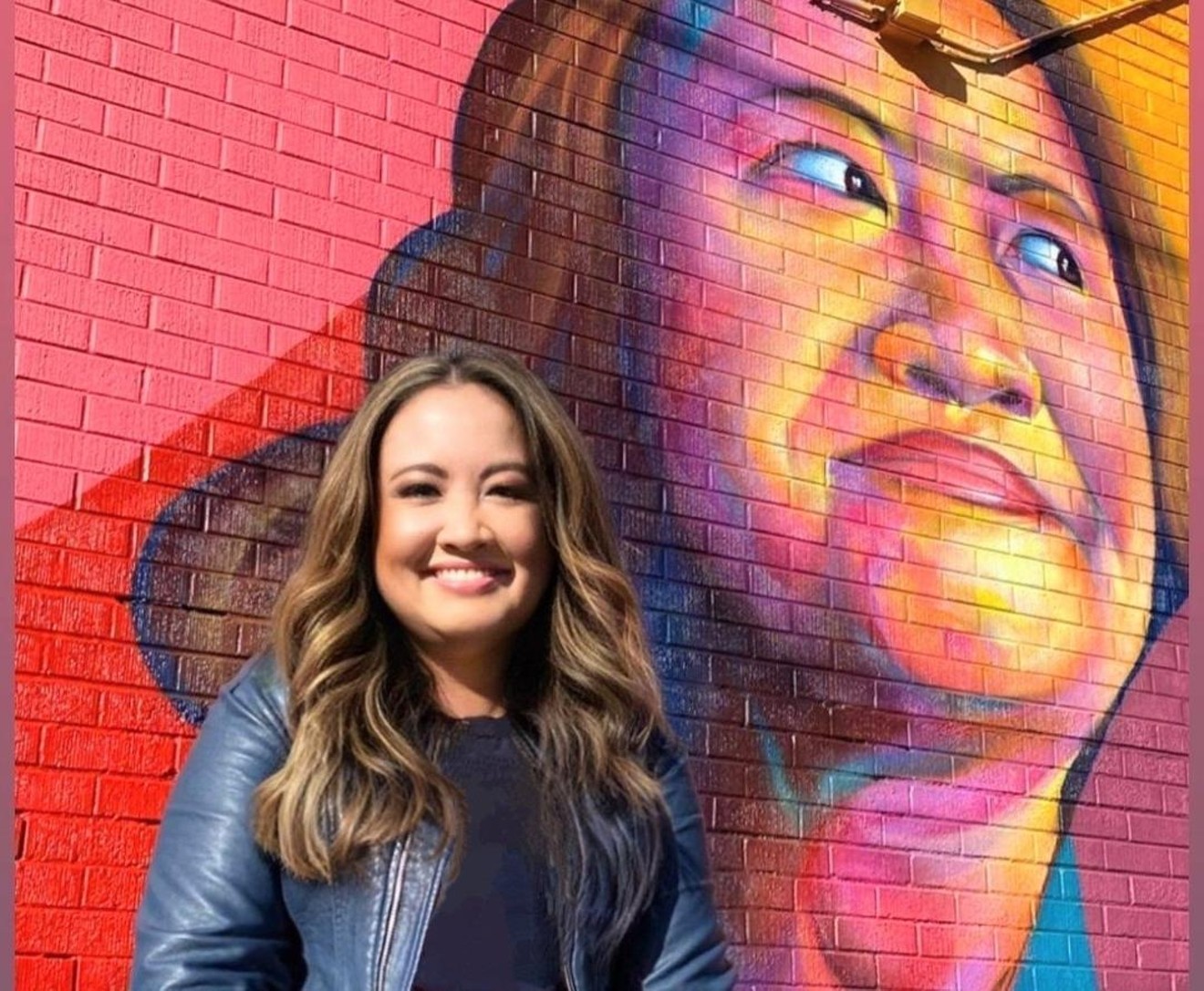 "I have been involved with human-rights advocacy for a very long time. And being a refugee myself, this was something more than just an interest," she says. "I feel the mural has been a lifeline to ensure that everyone who has been forcibly displaced has an opportunity to have others recognize the importance and the prevalence of this issue."

The mural went up in December 2020 at 24th and Curtis streets in Five Points; Detour documented the process with a time-lapse video that he posted to his YouTube channel. "I knew it was gonna be something pretty extraordinary, because I knew his work," Vương-Sandoval says. "I had seen his work around Denver, and I also knew that it was more than just an image. It was going to represent something much bigger than me, much bigger than Denver, because this is a global issue. ... This is also the first time that I have seen in Denver anyone of my background being portrayed in this very creative way, so it was an honor in many ways."

Over time, the mural became filled with written messages from visitors, including this: "Invest in refugees."
But you can't see the colorful portrait of Vương-Sandoval anymore: The bus station at 2450 Curtis Street, where the mural was located, is being demolished. Denver developer Craine Architecture is set to build a three-story, 104-unit apartment building there, according to Denverite.

Although she knows that street art is not designed to be permanent, the fact that a building with a mural about displaced people is being replaced by new apartments in an increasingly gentrified Five Points isn't lost on Vương-Sandoval. "The irony, it's jarring," she says.

Detour purposefully does not identify the subjects of his murals, she notes, because those who are truly interested will find the answer for themselves. And with a little research, it's easy to find out about Vương-Sandoval. She works as a project manager for U.S. Refugee Advisory Board for Refugee Congress and is the first refugee boardmember of Lutheran Family Services, a resettlement agency whose affiliate agencies helped her own family members when they first came to the U.S.

Vương-Sandoval already was a recognizable name for those working in that arena, but after the mural was mounted, she received many notes from people interested in her life and her work. "It came in so many different avenues that I didn't even imagine," she recalls. "I've had people reach out asking more about my work, saying that it reminded them that this is an ongoing crisis going on globally. And one of the most prominent organizations that have reached out to me is the United Nations High Commissioner for Refugees."

In May, Vương-Sandoval, who was the recipient of the 2021 Refugee Congress Excellence Award, received a Badge of Honor from the UNHCR for her work to highlight refugee crises when she gave a speech at the Bold Women. Change History summit in Denver, where she received a standing ovation.

"What was particularly special about that is that UNHCR was the same organization that provided direct humanitarian relief efforts when my family and I lived in refugee camps," she reflects. "So it meant even more to me that here, I am in a situation where they're reaching out to me instead of me reaching out to them.

"The situation is strikingly contrasting to when I initially arrived in the U.S.; to have that same organization reconnect is very surreal and very serendipitous, because of all the organizations, I would have never imagined to hear about my mural and to hear about my work in that way," she continues. "That was particularly meaningful, and it was a tremendous honor for me personally. And I knew that if that happened, it would have such a ripple effect on how the world sees us as refugees, how the world had another reminder of the work that we're doing and how much we contribute to the community. It sparked a lot of conversation, and that's what I'm most appreciative of."

The UNHCR even created a short film about her journey, which was highlighted at a September event by the Posner Center for International Development.

"When Nga reached out to share her recognition from UNHCR, we wanted to offer a screening of the film they created about her and pair it with a visit to Detour's mural of Nga as part of Posner's process of incorporating art into one of the modes of social justice that we support," says Posner program director Lauren Andraski. "We intentionally brought in other local activists and leaders: Ali Duncan of Urban Sanctuary to lead us on a walking tour from the mural to the Posner Center; Karen Bartlett of Kite and Dart and the Now & Center podcast to moderate the conversation; What the Pho to cater; and Casey Selover and other teachers from Kent Middle School, whose students created art pieces to illustrate Nga's refugee journey."
When the Posner Center got word that the mural was being taken down, executive director Burke Fishburn says that the nonprofit reached out to Detour to permanently install an image of the piece in its building at 1031 33rd Street.

But Vương-Sandoval misses the original mural and "that continual recognition for refugees and immigrants — that reminder of how much we are part of this community, and how much we contribute in so many different ways," she says. "And secondly, the fact that it sparked so much discussion and curiosity for those who would have never had an interest in issues relating to refugees. ... I know murals are never intended to be a permanent fixture. I know that. I recognize that. But my hope is that the conversation and the work, the action that people will take who want to support this issue, will continue far beyond the existence of an artwork."

She suggests that people interested in the refugee issue get engaged by educating themselves and donating to organizations that provide direct support to refugees, such as UNHCR or UNICEF, or donating to refugee advocacy organizations, like Refugee Congress, the U.S. Refugee Advisory Board or the Refugee Council U.S.A.
KEEP WESTWORD FREE... Since we started Westword, it has been defined as the free, independent voice of Denver, and we'd like to keep it that way. With local media under siege, it's more important than ever for us to rally support behind funding our local journalism. You can help by participating in our "I Support" program, allowing us to keep offering readers access to our incisive coverage of local news, food and culture with no paywalls.
Make a one-time donation today for as little as $1.
Emily Ferguson is Westword's Culture Editor, covering Denver's flourishing arts and music scene. Before landing this position, she worked as an editor at local and national political publications and held some odd jobs suited to her odd personality, including selling grilled cheese sandwiches at music festivals and performing with fire. Emily also writes on the arts for the Wall Street Journal and is an oil painter in her free time.
Contact: Emily Ferguson