Su Teatro's Next Fifty Years Will Be Mortgage-Free Bobby LeFebre and the cast and crew of Northside plug their show at Su Teatro in 2019. Armando Geneyro
As Tony Garcia — the heart, soul, spark plug and engine of Su Teatro Cultural & Performing Arts Center — tells it, the Denver Chicano theater was born on the street in 1972. A group of Chicano students, inspired by California groups like Luis Valdez’s Teatro Campesino, began performing actos — impromptu sketches, music and guerrilla works — on Denver's west side and around Auraria, the close-knit Latino neighborhood that was razed to make way for the Auraria higher-education campus.

It was a coda to the times when Brown Power, grape boycotts, La Raza Unida and Denver's Crusade for Justice, led by Corky Gonzales, rocked the barrios of the American West. Garcia and his broadly theatrical compañeros entered the arts world as activists and were without a physical home for seventeen years. But Su Teatro is now celebrating fifty years of serving the community and making original plays come to life.

And the theater has passed another milestone: The mortgage has left the building. After moving into the former Denver Civic Theatre at 721 Santa Fe Drive in 2010, Garcia and his board have finally signed over the last payment on the building. To commemorate this momentous occasion, Su Teatro is inviting the public to a mortgage-burning celebration on Friday, January 27. 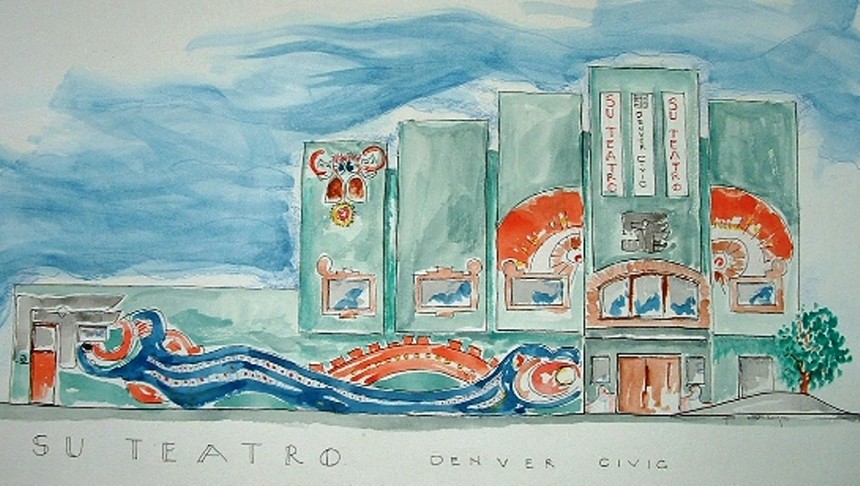 Su Teatro has paid off its mortgage on the former Denver Civic Theatre.
Art by Phil Luna, courtesy of Su Teatro
“It represents the journeys of a couple of generations,” Garcia explains, “so it’s auspicious for our community, too. We’ve had so many roadblocks along the way.”

Su Teatro’s first indoor stage was mounted as El Centro Su Teatro in 1989 in the old Elyria School building at 4725 High Street, though Garcia admits that the troupe was squatting there before the deal was even finished. Twenty years later, the company outgrew the facility and the neighborhood, longing to return to its roots.

The members settled on a building a few blocks south of the Denver Civic to carve out as their own, but encountered financial problems during a period of compromised economy. “It was always our goal to be self-sufficient,” Garcia says. “Even in Elyria, we always did things on our own. Self-determination is something we gathered from the Chicano movement; we were not dependent on the community. In 2010, we picked up the Civic Theatre for $785,000, but the past owners were a disaster.”

The Civic, established by theater impresario Henry Lowenstein in 1985, had gone downhill after frequently changing hands. The last group left the theater in foreclosure — not a perfect ending, by any means — but the city and then-Mayor John Hickenlooper helped arrange a mortgage. “Hickenlooper made it happen and negotiated a lot of stuff for us. We moved in on our own, also using funds from the Elyria building when we sold that in 2013,” Garcia recalls.

While slowly paying off the mortgage over the past twelve years, Su Teatro grew in leaps and bounds. Beyond its regular stage fare, the company introduced the XicanIndie Film  Festival, the annual Chicano Music Festival, and WordFest, a conglomeration of theatrical and literary readings. It also has a healthy rotation of community-oriented holiday shows that remain popular with audiences.

“It’s a great time for us to continue experimenting. People don’t realize that we have a strong national reputation," Garcia says. "We’ve produced more than forty original pieces, including collaborations with national people. We’ve also presented tons of Latino artists, like the playwright Octavio Solis. Many guys in regional theater from other cities produced here before their work was seen back where they came from.”

Su Teatro was recently invited by the Denver Center for the Performing Arts Theatre Company to produce Solis’s well-received 2022 show Quixote Nuevo, but turned it down because of a lack of people and proper resources. “They wanted us to produce it financially and artistically, but we currently schedule our seasons out two years in advance,” Garcia notes. “When those opportunities come, it can be better for us to just hang.”

He also has faith in artists he’s discovered in Su Teatro’s own backyard: “The people who have come through here recently — like Bobby LeFebre, who created the hit play Northside, and Marialuisa Meza-Burgos, who runs an all-woman mariachi group — are what got us to circle back to paying off the mortgage.”

Su Teatro’s final drive toward ownership of the building officially began with Northside’s premiere in 2019 and a simple ploy: “We sold seats. I began to sell nameplates for seats over the past three years, and the payments have been made," Garcia explains.

“Our community did this. We thought about it, and everyone said, ‘Let’s just write a check and be done with it.’ But people stepped up. It does speak to the fact that this place will be here for generations to come,” he continues, adding, “We still have ten seats left to buy, if anyone else wants to be a part of this.”

In Garcia’s estimation, Su Teatro has a lot going for it in the present. While he is well known as the company’s artistic director, it’s largely a secret that he also handles all the finances. “I turned seventy this year,” he says. “I’d like to do less in the coming years. We don't have an immediate transition plan, but there will be more gradual training for people who have history here. There’s still a lot of work to be done.” 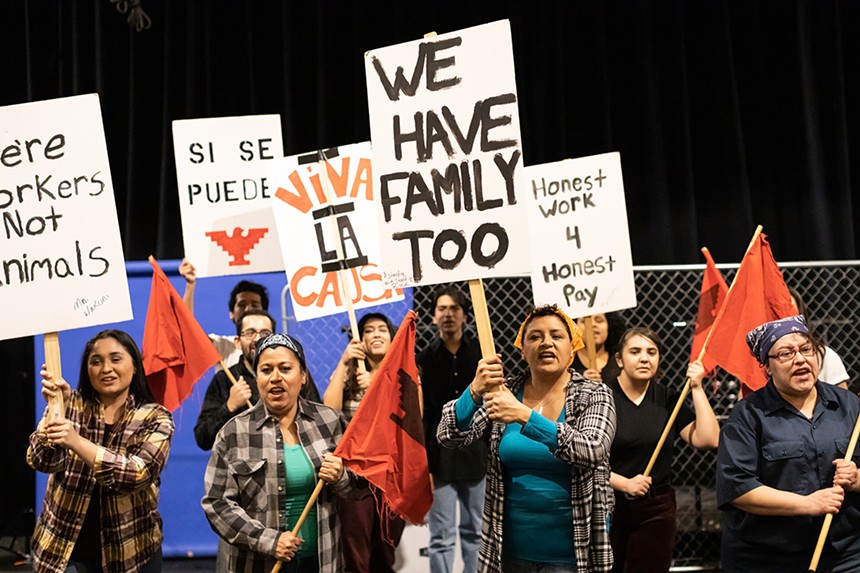 Su Teatro casted eighteen actors in its re-creation of the Kitayama Carnation strike in 1969.
Jake Holschuh
Is retirement in the stars? “As an artist, I don't know how I stop creating,” he remarks. But he’s also taking his time, and continues to look to the future of Su Teatro: “Lorenzo Gonzalez, who teaches acting at Naropa University, is working on a Day of the Dead work. A ton of artists will be coming through when we hold our April readings. There are some people evolving good work; we help get them on their feet.”

And Garcia’s daughter, Mica Garcia de Benavidez, is waiting in the wings to take over finances. “I always thought I’d be a great maintenance person,” Garcia quips. “We will continue our commitment to supporting artists and training artists. We want to do more interesting pieces with interesting directors, more work by Latinas, and more of the kind of stuff we’ve been doing since Northside."

Contemporary issues in the Chicano community are of particular interest to the troupe, as are stories from other cultures with connections to Latinos. For instance, Garcia recently produced Promise on the Hill: A West Colfax Memory, a collaboration with OxiClean founder Max Appel about Denver’s Jewish Westside. “We’re teaching people how to write these stories that have parallels to our community,” he says.

Su Teatro’s guiding purpose is as a people’s theater, Garcia says — a place “where your world, stories and culture can come together.” It’s always been true for the theater, but now it fully owns a building to settle into, with a better footing in the face of gentrification in the surrounding La Alma/Lincoln Park neighborhood.

With the end of its fiftieth-anniversary season in sight, Su Teatro is now building up to a new one. “We will be announcing our next season soon,” Garcia says. “You'll see some really interesting local people.”

The next show, El Espiritu Natural, written by Garcia with music by Su Teatro stalwart Danny Valdez, begins on March 9. “It’s a family piece about the mythology of nature,” Garcia explains. “Everyone gets sucked into a vortex force called ‘the absence,’ which is a loss of generational memory in a place in the future dealing with monoculturalism. The style is vaudevillian, broad, but the jokes display a kind of sophistication. In one scene, an immigrant comes across the border, slipping under a fence in slow motion to the Chariots of Fire theme music." Tickets, $20, are on sale now.

Meanwhile, come celebrate Su Teatro on Friday, January 27, at 4 p.m. at 721 Santa Fe Drive, with a free ceremonial burning of the mortgage in the parking lot (Garcia promises the real papers won’t actually be burned), followed indoors by refreshments, music and a “brindis,” or toast, to the community.
KEEP WESTWORD FREE... Since we started Westword, it has been defined as the free, independent voice of Denver, and we'd like to keep it that way. With local media under siege, it's more important than ever for us to rally support behind funding our local journalism. You can help by participating in our "I Support" program, allowing us to keep offering readers access to our incisive coverage of local news, food and culture with no paywalls.
Make a one-time donation today for as little as $1.