Teague Bohlen
What a long, strange, bookish trip it’s been. The Tattered Cover will celebrate its golden anniversary on Thursday, October 28; the event is a fiftieth-birthday party of sorts, but also marks the debut of author Mark A. Barnhouse’s newest book, Tattered Cover Book Store: A Storied History.

In 1971, the Tattered Cover opened its door — a dutch door, Barnhouse’s book recalls, with the top half usually open on warmer afternoons to let the breeze mingle with the books. The store was on East Second Avenue between Detroit and Fillmore streets and took up less than 1,000 square feet. Stephen Cogil founded the store, and sold it just three years later to Joyce Meskis, who helped usher the independent bookstore into ever-larger spaces over the years in terms of both physical real estate and the hearts of Denver’s citizens.

Last year, the Tattered Cover was sold to another group, including new CEO Kwame Spearman. This anniversary “couldn’t have come at a better time in the trajectory of Tattered Cover," he says. "If you look at what the business has been through in the past eighteen, nineteen months? To be in a position where we’re celebrating the anniversary…setting the business up for another fifty years? It’s really important.”

A 1979 Tattered Cover staff photo.
Tattered Cover Archives
Spearman admits that the road has been rough recently. “There were a lot of questions in January as to if the fiftieth anniversary was really going to be a prolonged goodbye," he explains. "We haven’t solved all the problems, but there’s a renewed optimism and a renewed sense of Tattered Cover’s role in the broader community. So it’s an anniversary party, but it’s also a coming-back party, coming back to where Tattered Cover should be.”

Still, many of the stories traded at the fiftieth-anniversary event will no doubt focus on where the Tattered has been. When it was the anchor to Cherry Creek North in the old Neusteter's building, below the Fourth Story restaurant. When the original LoDo store opened at the edge of the 16th Street Mall at Wynkoop Street. When the Lowenstein store, where the celebration will be held, joined the lineup. “We’ve done a lot of changing,” says Spearman, “and underneath all that is such a respect for all the amazing things the [Tattered Cover] brand has accomplished. The author of the book did such an impressive job interviewing a number of alumni, gathering their stories. The nostalgia is this: At our core, we love literature. And we’ve spent fifty years sharing that love with the people around us. That’s what’s being talked about in the halls of Tattered Cover, what this book and this event are all about. No one’s done a better job expressing that love of literature than Tattered Cover over the past fifty years.” 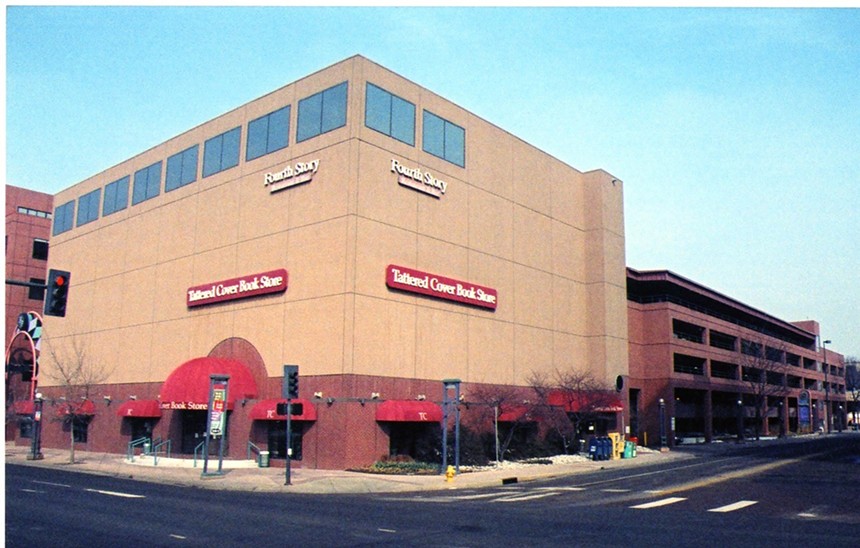 Exterior of the Cherry Creek Tattered Cover circa 1995.
Tattered Cover Archives
Barnhouse was the natural choice for writing the history of the Tattered Cover, partly because of his past publications — his recent Vanished Denver Landmarks, A History Lover’s Guide to Denver and Lost Department Stores of Denver — but also because he was part of the Tattered Cover team, working at two locations over almost six years.


“I first encountered the TC in 1980, when I was eighteen and the store was only nine years old,” recalls Barnhouse. “That summer I decided I had to read all of Charles Dickens's novels, in the order they were written, but most stores only stocked a few — and they were all the same ones. Somewhere, and I’m almost certain it was in Westword, I had read about this shop in Cherry Creek that ‘had everything,’ so one day I rode my bike down there and was blown away. I was able to buy a copy of The Pickwick Papers and my Dickens project was off and running. I was hooked.” 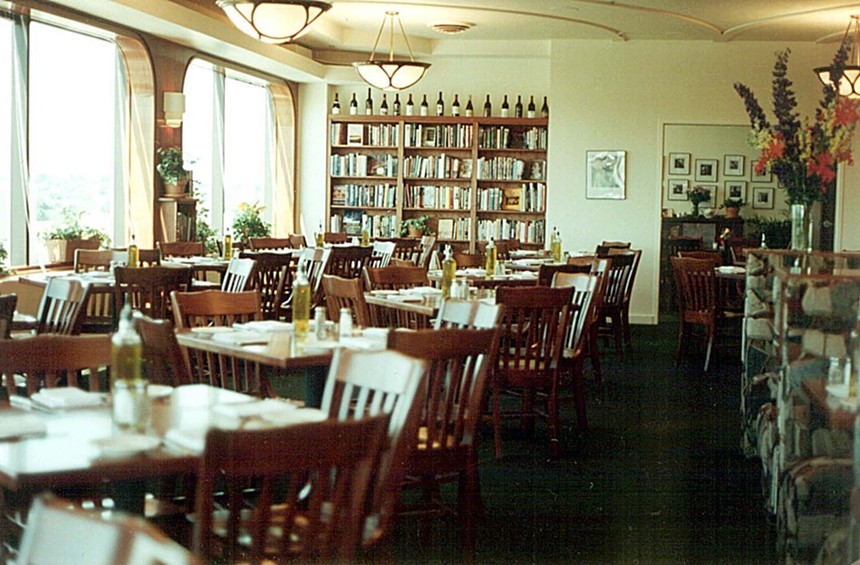 The late, lamented Fourth Story restaurant.
Tattered Cover Archives
In 1994, Barnhouse enrolled in classes at the University of Colorado Denver and took a job at the Tattered Cover. “It’s very hard to convey how wonderful it was to work at the store at that time,” Barnhouse says. “Truly, I looked forward to reporting to work — there was never any sense that it was just a job, even though the pay was very, very low — $5 an hour in 1994, $7.80 when I left in 2000. I got to sell books, magazines and newspapers to famous (for Denver) people all the time, and once in a while, a true celebrity would walk in. I got to meet one of my literary heroes, the late, great David Foster Wallace. I was there when Hillary came to sign It Takes a Village in 1996. I was in LoDo for Jon Krakauer’s Into Thin Air, when a thousand people showed up and we didn’t leave the store until midnight. I got to know the regular customers, including a former Denver mayor, Quigg Newton, who came into Cherry Creek most days to pick up a copy of the New York Times.”

Patrons waiting in line at a Dan Quayle appearance, 1994.
Tattered Cover Archives
“Writing this book was, as you can tell, very much a labor of love for an institution I consider as important as any in Denver,” says Barnhouse. “It’s not just another retail business to me.” This sense of the Tattered Cover’s role as an important Denver cultural institution is more than evident in the book’s pages; it’s the heart of the story itself.

So how does CEO Spearman envision the potential for a hundredth-anniversary celebration, way down the road in 2071? “I think what you’ll see is a physical Tattered Cover space at the heart of many communities throughout Colorado," he responds. "They’ll be community institutions, places where you can not only buy books, but also come together, talk about important issues, meet one another, and be comfortable in a literary space.”

Here’s to the next fifty years: Keep those pages turning.

Celebrate fifty years of the Tattered Cover with Mark A. Barnhouse and special guests at 7 p.m. Thursday, October 28, at the store at 2526 East Colfax Avenue. The author/historian will be joined by former Tattered Cover employees to share memorable moments from the past fifty years. Tickets, which include a copy of Barnhouse's book and guaranteed seating, are $25 (plus fee and tax). Find out more here.
KEEP WESTWORD FREE... Since we started Westword, it has been defined as the free, independent voice of Denver, and we'd like to keep it that way. With local media under siege, it's more important than ever for us to rally support behind funding our local journalism. You can help by participating in our "I Support" program, allowing us to keep offering readers access to our incisive coverage of local news, food and culture with no paywalls.
Make a one-time donation today for as little as $1.