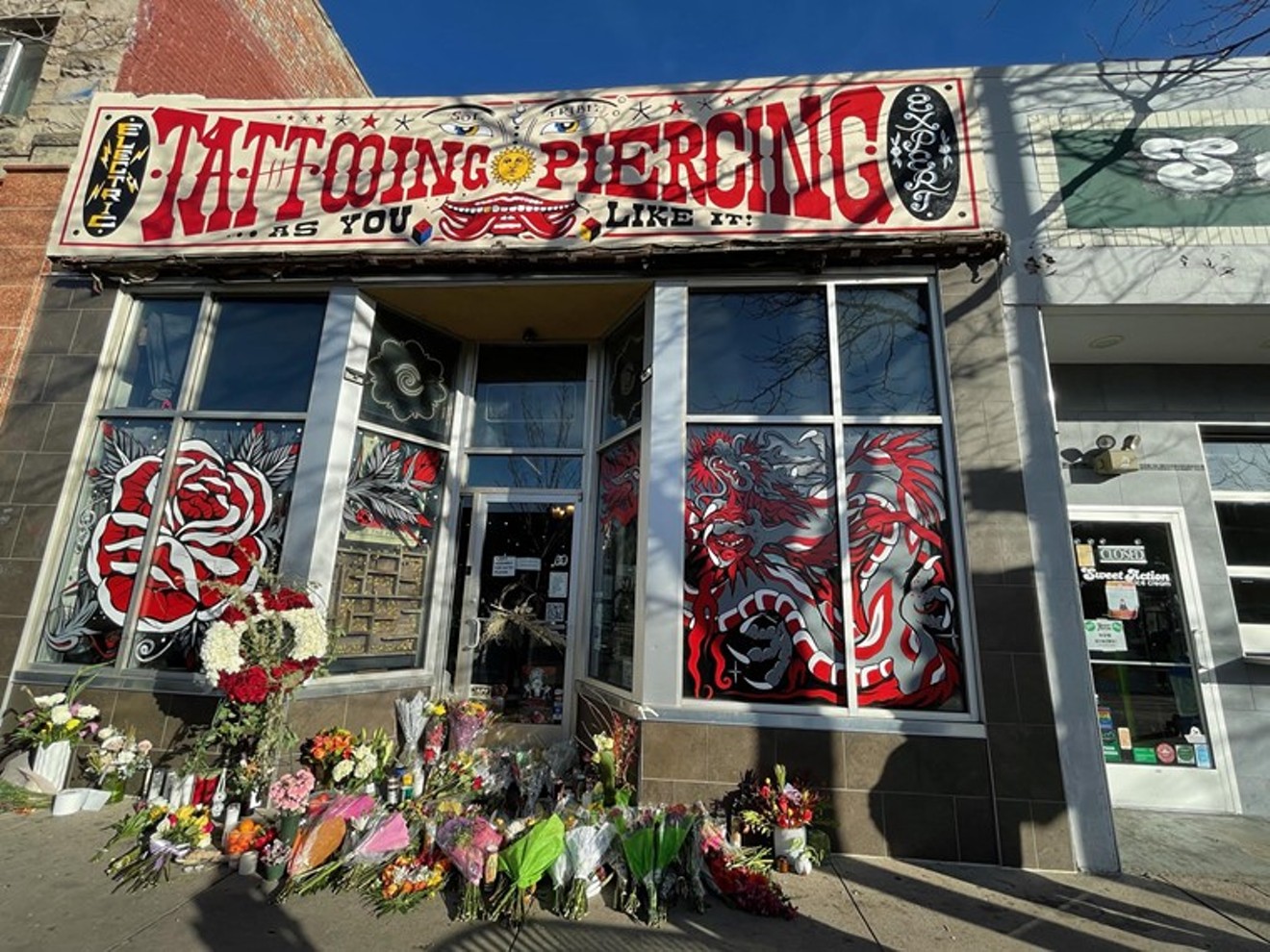 The December 27 shootings started at Sol Tribe. Catie Cheshire
Denver's tattoo community is coming together on Sunday, January 16, in a benefit to raise funds for the survivors and families of the victims of the December 27 killings: Alicia Cardenas, artist, activist and proprietor of Sol Tribe tattoo shop; Alyssa Gunn-Maldonado, a yoga instructor who was killed at Sol Tribe; Danny Scofield, a tattoo artist who was at Lucky 13 Tattoo; Sarah Steck, an artist who worked at Hyatt House; and Michael Swinyard. James "Jimmy" Maldonado, a piercing artist who was married to Alyssa, and Ashley Ferris, the Lakewood police officer who shot the killer, were injured.

Several tattoo shops around the state are taking part in the United in Art, Doing Our Part Tattoo Fundraiser, which will include flash drawn from the work of Cardenas, Scofield and Steck, who was not a tattooer but an artist who worked at the Hyatt House as a clerk.

Husband-and-wife team Stevi Miller and Martin Sandoval of Modified Madness Tattoo in Thornton decided to organize the fundraiser shortly after the shooting. "In December we organized a gift drive for teenagers and collected two truckloads of gifts and hygiene items," Miller says. "And all of a sudden this happened, and we knew we had to do something.

"It shocked us and scared us," Miller continues, holding back tears. "We're a family-run business, and our four kids are at the shop with us every single day. ... The tattoo community is so close. We're enemies, but we're not enemies — you don't want your client going somewhere else, but when something like this happens, we come together."

Miller posted a message about the fundraising idea in a Colorado tattoo group on Facebook, and shops immediately responded. She reached out to Cardenas's brother and Scofield's sister to access their artwork for flash. "I had seen Sarah Steck's online portfolio, and she has some artwork that would totally work as tattoos. I got permission from her family to use some of those as the tattoos for that day," Miller adds.

Some of the shops are offering their own original artwork, and Modified Madness has received prints for the fundraiser from Phoenix Tattoo Company, Access Gallery and Ink Lounge Denver. Inked Out Tattoo Supply is running a raffle that's $25 per chance (only tattoo shop workers and artists can enter). All proceeds from the fundraiser will go to the victims and their families through the Colorado Healing Fund. The goal is to raise $100,000, and monetary donations are also welcome.

"I think people still have a negative stigma about tattoos, and this fundraiser will really open up people's eyes and show we are one big family," Miller says.

So far, the shops taking part include:

Find information and a map of participating shops here.
KEEP WESTWORD FREE... Since we started Westword, it has been defined as the free, independent voice of Denver, and we'd like to keep it that way. With local media under siege, it's more important than ever for us to rally support behind funding our local journalism. You can help by participating in our "I Support" program, allowing us to keep offering readers access to our incisive coverage of local news, food and culture with no paywalls.
Make a one-time donation today for as little as $1.
Emily Ferguson is Westword's Culture Editor, covering Denver's flourishing arts and music scene. Before landing this position, she worked as an editor at local and national political publications and held some odd jobs suited to her odd personality, including selling grilled cheese sandwiches at music festivals and performing with fire. Emily also writes on the arts for the Wall Street Journal and is an oil painter in her free time.
Contact: Emily Ferguson