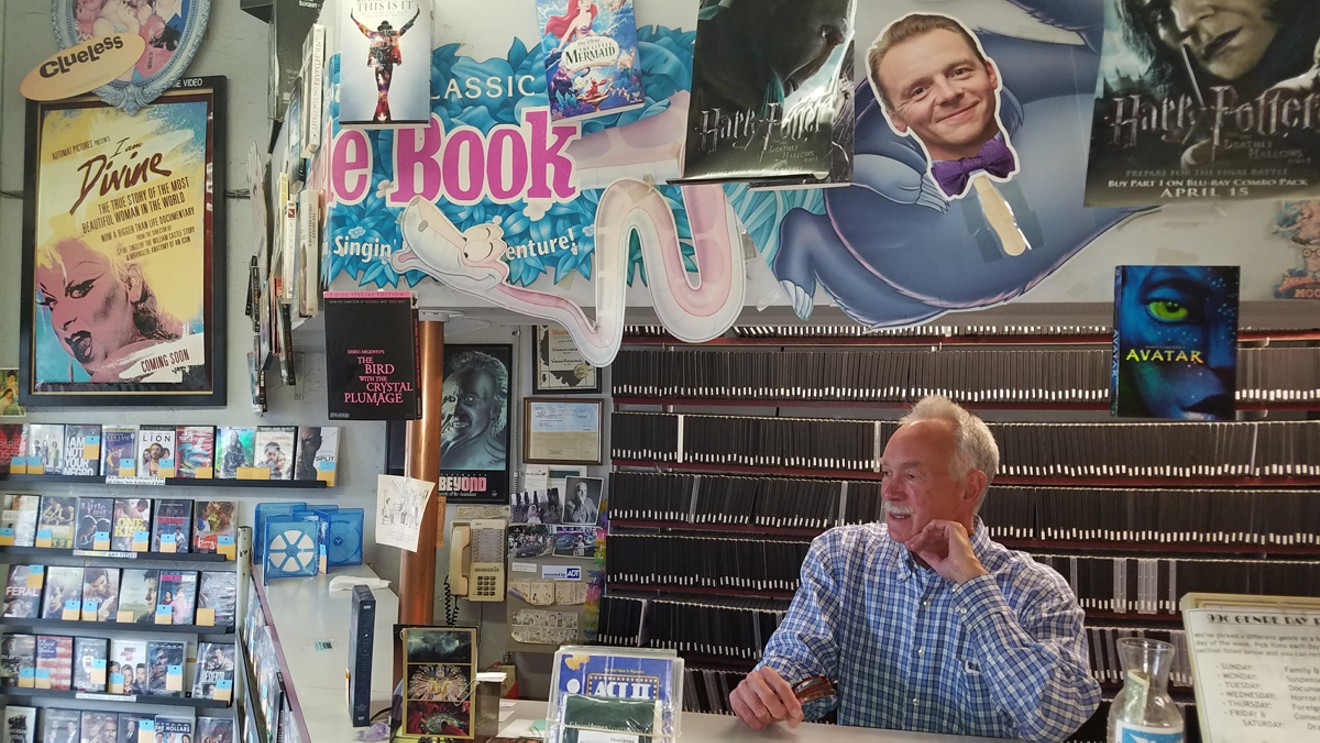 After 32 years of entertaining customers, John Donahoe and Videotique are ready to say goodbye to Capitol Hill. Keith Garcia
Now 32 years old, Videotique – Denver's last video-rental shop – will shutter its doors at the end of June.

The Capitol Hill store was founded in July 1985 by partners John Donahoe and Jim Doescher, along with two others, at 1205 East Ninth Avenue. They hoped to make a name for themselves in the bustling home-video-rental market that had bloomed in the early ’80s. 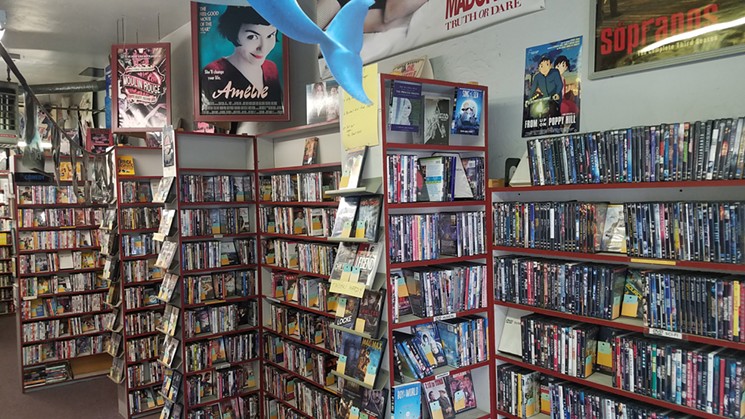 Videotique boasts a trove of cinematic goods.
Keith Garcia
“Well, we all liked movies,” says Donahoe, the public face of Videotique. “Video stores were becoming so prevalent back then. They were like how coffee shops are now. And we just thought this would be a fun venture. Plus, as gay men, we could also incorporate gay porn and queer films and really offer something that no one else was. We never intended on becoming the “gay video store,” but we certainly never shied away from that title, either, even though we’ve always carried all of the popular mainstream films, too.”

The shop found success as private video rental revolutionized the adult-film industry and the independent-film movement at the same time, both boosting the demand for queer cinema. Videotique’s location in the city's original gay neighborhood, around Cheesman Park, filled a welcome niche for decades.

“The biggest change I’ve watched over the years is the makeup of the people living in Capitol Hill," says Donahoe. “I’ve been living here since 1971, when Cheesman Park was definitely the gay cruising area. The homogenization of the area has changed so many things. At one time, this was the gayest corner in the city. Now it’s just like every other corner in town.” 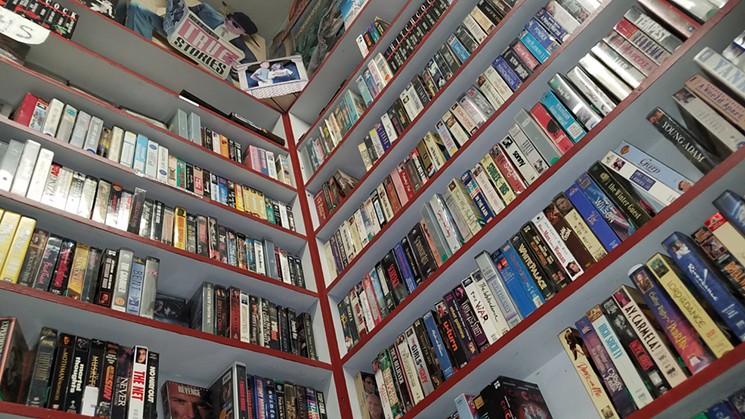 Last year, Denver saw the iconic Video One close its doors, and a few months ago, Boulder’s Video Station, which boasted 50,000 titles, shut down. Fort Collins’s Village Vidiot is likely the only mom-and-pop video shop in Colorado, and it just ran a crowdfunding campaign to stay open for another six months. 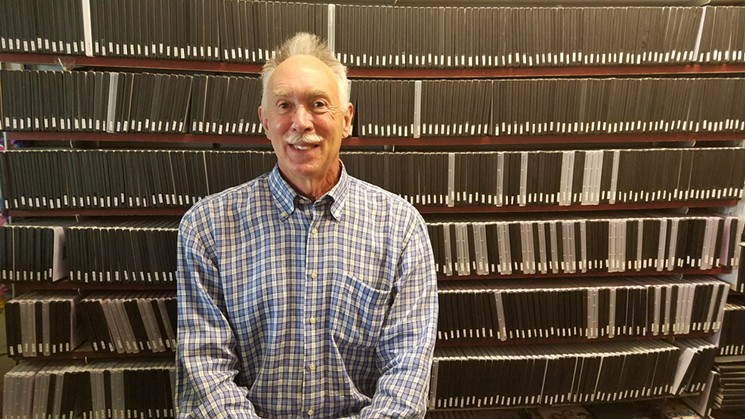 Videotique owner John Donahoe.
Keith Garcia
“I never thought it would change so much,” says Donahoe of the state of video rental shops. “I thought DVD would be the advanced format forever, but the amount of people watching and renting DVDs changed so quickly. I was looking at our figures and saw that our grosses over the last fifteen years have dropped 80 percent. We’ve leveled off since then, done what we needed to stay afloat, but it doesn’t make sense to go on.

"We’ve been leasing our space in five-year increments, and in the next five years, I really don’t think things will get better for the market or other remaining video stores," Donahoe continued. "People have told us we should advertise more, that nobody knows we’re here. If they did know we were here, would they rent from us? It’s not as profitable as it used to be, but we’ve had a long, good run, and we’re ready to do something else. Our lease was up, and continuing was out of the question.”

Though the credits may be rolling on the store, Donahoe is looking forward to a new chapter in his life.

“I’m excited to jump into something in our arts community, but day-to-day retail and running a business has taken its toll,” says Donahoe. “I’m ready to move on. Working here has given me a more open viewpoint on the world. Serving this community for this long in this spot has brought so many people from all over the spectrum – gay, straight, conservative, liberal, male, female – all coming to this little store for entertainment and showing me the great – and sometimes the not so great — little aspects of our big world.” 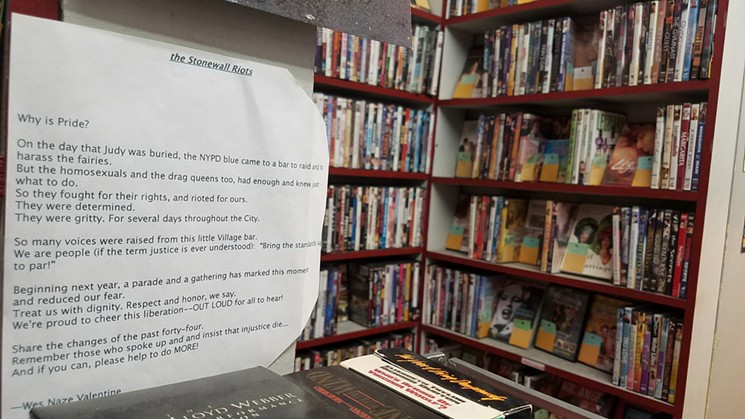 A poem by a longtime customer greets patrons as they enter the store's vast LGBTQ section.
Keith Garcia
In all of its years, the store never turned flashy or changed with the times — aside from video formats, which actually worked in its favor.

Says Donahoe, “I remember going to the warehouses where we store owners used to get all of the movies and promotional materials, and one day there was this group of folks filling their baskets with tons of stuff. We were informed that they were a group from Texas with a new store called Blockbuster. All in all, we were here in town before Blockbuster planted their roots and started to make a big impact on the business. We were here before them, and we were here after them.” 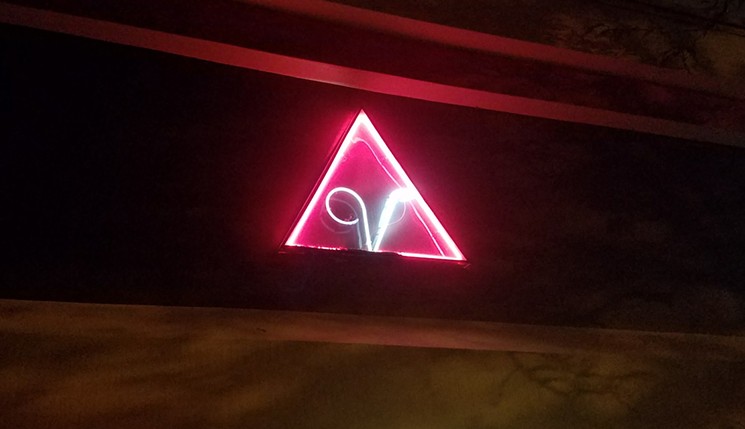 Videotique's original pink and white neon logo will soon flicker off.
Keith Garcia
For the next month, the small shop will begin to sell off its massive inventory of 8,000 films, including the largest gay-film collection in the state, all of which will sorely be missed by many of Videotique’s longtime customers.

Videotique will remain open until the end of June at 1205 East Nineth Avenue. Call the store at 303-861-7465, visit its Facebook page, or just stop by before this relic of the golden age of home videos shuts down for good.