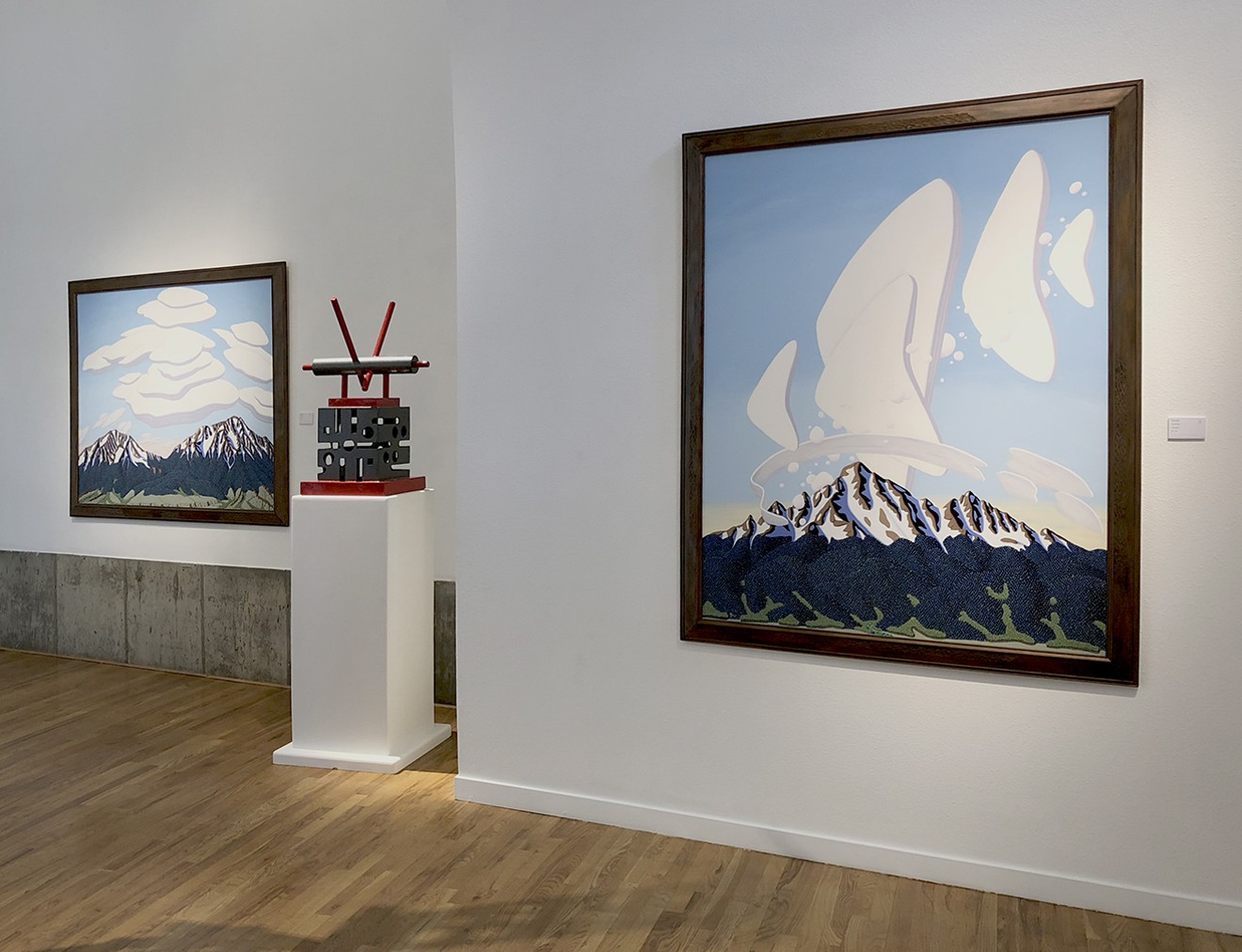 Tracy Felix paintings bracket an Andy Libertone sculpture. Nick Ryan/William Havu Gallery
Colorado artists Tracy Felix and Sushe Felix, who are husband and wife, are paired in The Modern West at the William Havu Gallery. Over the past several decades, both have focused on creating parodies of historic Western landscape paintings, especially the modernist ones from the 1930s and ‘40s — hence the show’s title. Despite the artists' close associations in terms of subject, approach and palette, however, they've developed signature styles that would be difficult to confuse with one another.

Tracy’s paintings take a traditional approach to composition, with the mountain peaks and their skirts of triangular trees depicted in the center of the panels. But the influence of the classic approach is tempered by the aesthetic of Yogi Bear’s Jellystone Park, seen especially in his representations of the skies, which are dotted with sculptural and abstracted clouds that often take on unnatural shapes, like balls, ribbons, triangles and other forms. In the monumental “Cloud Dance,” the clouds look like boomerangs.

Sushe Felix, “Revenge” (foreground); “Visitors” (background).
Nick Ryan/William Havu Gallery
Sushe’s paintings and drawings are similar...to a point. She likes to introduce unlikely subject matter — such as factories with chimneys belching smoke, or flying saucers — into her otherwise lyrical depictions of mountain scenery. Several of her paintings here have fractured planes and a cubist sense of three-dimensional space inspired, to a great extent, by the New Mexico transcendentalism of the late Raymond Jonson. In “Rain, Cranes, Trains and Automobiles,” a scene of downtown Denver with the Front Range in the background has been conceived as a series of receding planes, set one in front of the other.

The tiny drawings that accent, and in some cases anticipate, the large paintings are remarkably detailed and have the look of etchings or lithographs, two mediums that Sushe really should consider embracing. 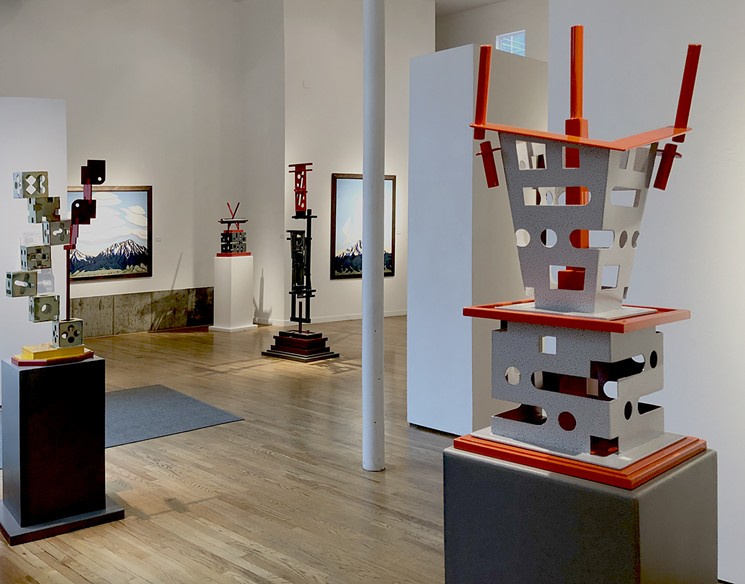 Sculptures by Andy Libertone, powder-coated steel.
Nick Ryan/William Havu Gallery
Tracy Felix and Sushe Felix have been exhibiting in Colorado since the 1980s, but sculptor Andy Libertone, who is new to Havu, does them one decade better: He started showing in the ’70s. He’s also a legendary figure in the alternative scene, being a founder of Spark Gallery, the city’s oldest existing co-op. His sculptures here are colorful and hieratical constructions that sometimes look like little buildings or towers, with an architectonic quality in the forms carrying over into how Libertone constructed them: He built them out of metal beams and sheets.

“Third Degree,” a bifurcated steel construction rising out of a stacked base, is the only large sculpture here. Libertone plays with symmetry versus asymmetry, and though it looks balanced, the pierced screen on top that acts like a finial is supported by only one of the two structural elements. The brightly colored sculpture has been finished with a powder coating in shades of red, gray and black.

As an added attraction, the gallery is displaying historical prints by Dale Chisman, Werner Drewes and Robert Ecker on the mezzanine, to coincide with Mo’Print: The Month of Photography.

The Modern West, along with Libertone's sculptures and the prints, will remain on display through April 21 at William Havu Gallery, 1040 Cherokee Street. Call 303-893-2360 or go to williamhavugallery.com for more information.