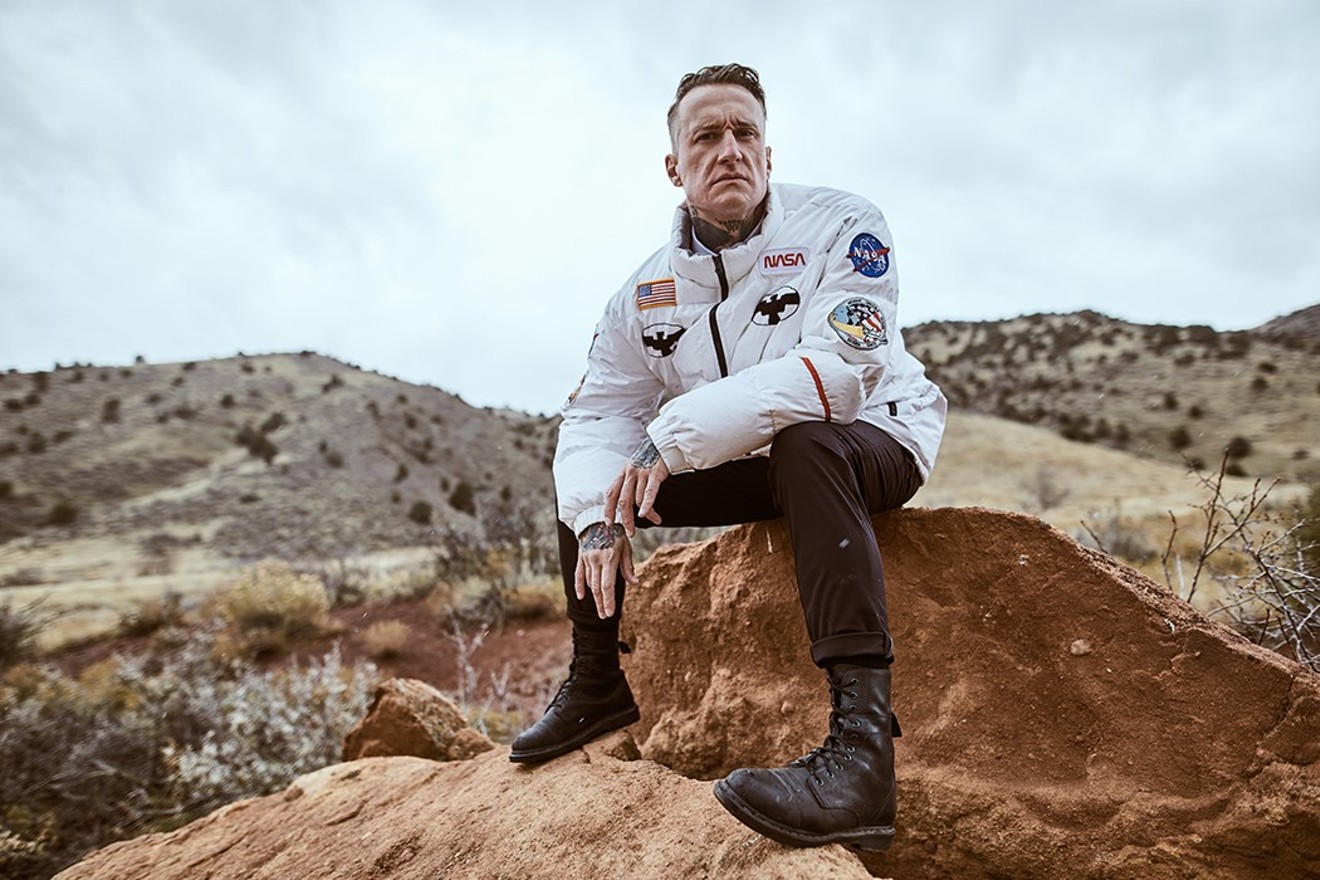 The illustrator and writer, whose work has appeared in Heavy Metal, started drafting his debut graphic novel, a space opera, in 2016. Between a grueling academic job he'd had for nearly twenty years and caring for his elderly mother, he didn’t have much free time to work on it. But he fought off exhaustion, cut back his sleep to two or three hours a night, and eventually left his job to write and ink his queer dystopian sci-fi comic book — a project born from his personal struggles and his love for his mother.

“I'm the youngest of thirteen from a multiracial European family — German mom, French dad,” he says. “I was encouraged to express myself via writing and drawing by my angelic, protective mom as a kid.”

Comic books, in particular, shaped his view of the world: “They were these impossibly beautiful men and fierce, strong, powerful women in these amazingly designed clothes, who would save the world or threaten it or endanger it. How could you not be obsessed with that world and those visuals? That was my gateway drug to literacy and art.”

Navant's childhood was challenging, and he often languished on the social margins, turning to art and comics for comfort.

“I was literally the weirdo kid in the back of the classroom that was drawing the silhouette of a human figure and designing the clothing on top of them while the other kids were figuring out math equations,” he recalls. “It was just always the language that I spoke.” 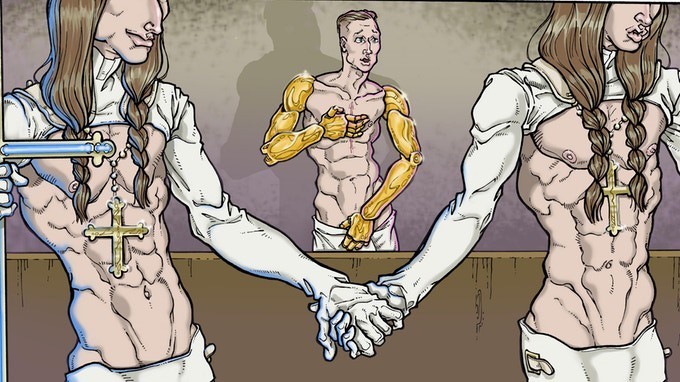 13: The Astonishing Lives of the Neuromantics
Yves Navant
And it was the art form that shielded him as he confronted life’s hardships.

“I am a survivor of childhood sexual abuse, I am a gay man, I come from a multi-racial European family,” Navant says. “I just kind of was literally the biggest outcast an outcast could be in American youth culture, and so it kind of fueled me toward punk rock and rebellion and revolution, because I was just beaten down at every turn in life. It kind of gave me the mentality of a revolutionary.”

He puts all of that to work in 13: The Astonishing Lives of the Neuromantics, a graphic novel rich with allegories for a world where human ethics have failed to catch up with technological progress, and where capitalism is mercilessly executed in a war between the rich and the poor.

In part, the book was a gift to his dying mother, to show her that he could do something monumental and to thank her for all she had done for him.

“Throughout the last couple of months of my mom's life, while her health was deteriorating and I was caring for her, I would literally sleep like two and three hours a night,” he remembers. “I would work ten hours a day at a day job, come home and write and digitally color this thing until my eyes were so heavy I could not force myself to remain awake, but then still try to care for my mom, hook her up to her oxygen, make sure she was taking the proper dosages of medication. She was my angel and the best figure in my life, the most redeeming, protective figure in my life, so I wanted to do my best to care for her.

13: The Astonishing Lives of the Neuromantics
Yves Navant
“Every night, I would say, ‘Okay, I love you. Make sure that you stay with me. Just stick around until I finish this book. I want you to be proud of me,’” he recalls. “She would say, ‘Okay, okay, of course I will.’”

His mother was in the hospital when he finished drawing the last page of the book and went to visit her. It was late at night and she had been asleep, but she awoke as he approached her. He reminded her of her promise to stay with him until he finished the book. He held her hand, and she looked frail.

“It was the first time in her life that she could ever not face me when she spoke, and she turned away from me, and her eyes got glassy, and she said, ‘I'm sorry if I can't,’" he recalls. “So I walked around the other side of her bed, and I kissed her forehead and I held her hand, and I looked at her and just had a moment with her and told her I loved her, and kind of left knowing that she was apologizing to me because she could not fulfill her promise to me.”

She died soon after. 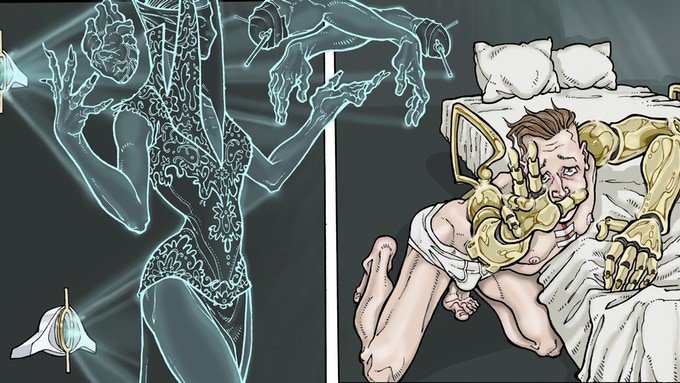 13: The Astonishing Lives of the Neuromantics
Yves Navant
“On the one hand, it's heartbreaking to know that I had finished what I think is the most beautiful work of my life and that my mom is not here to see it, but on the other hand, it fills me with determination and fire to plead with people to pay attention to it," he says. "My hope is that if enough people see it...it sounds childish, but my hope is that if enough people see it, their reaction to it is that it will get my mom's attention, wherever she is, and that she will experience it though all of us.”

Seattle-based LGBTQ comics publisher Northwest Press took on Navant's book, and together they've launched a Kickstarter to help fund the publication and ultimately present it at Pop Culture Con this summer.

“As a creative, as an illustrator who has written this work, I am just so desperate to get people to see it,” Navant says. “I am confident enough in myself and strong enough of a man to say I was struggling so badly emotionally and in all areas of life while I was creating this book, and this book was my last shout-out. It was my last attempt to get people to share my story or to see my work. It was the thing that made me hold on. I would just finish one more page, get one more page done, and it would be just such a profound gift, such a life-changing thing to get people to see this thing that really was my lifeline."

Learn more about Navant's Kickstarter at yvesnavant.com.
KEEP WESTWORD FREE... Since we started Westword, it has been defined as the free, independent voice of Denver, and we'd like to keep it that way. With local media under siege, it's more important than ever for us to rally support behind funding our local journalism. You can help by participating in our "I Support" program, allowing us to keep offering readers access to our incisive coverage of local news, food and culture with no paywalls.
Make a one-time donation today for as little as $1.