Best Sushi in a Non-Sushi Restaurant 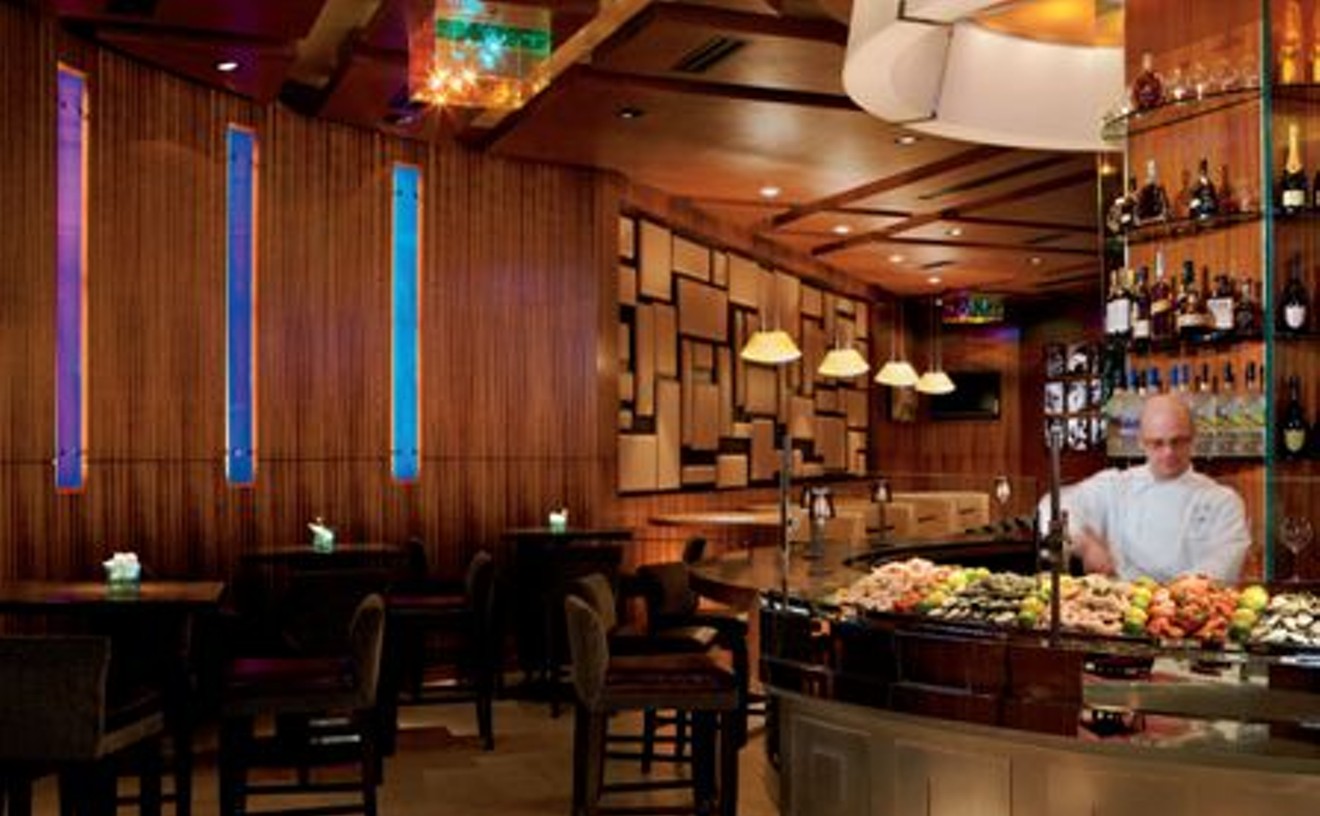 The staff at Elway's Downtown clearly saw what a bloody steak could do for a carnivore's libido, so last spring, they unshucked a sushi bar: proof that the junction of toro and tenderloin is just as natural as that of beer and pretzels. The display — exquisitely fresh, glistening fish that glows like silk — rivals the quality of what you'll encounter at restaurants where sushi headlines the menu. You can order sushi from the dining room, or just kick back at the bar with some sake and watch as the stark white plates surface with artfully arranged, translucently thin slices of sea bass carpaccio dotted with tobiko and chives, or new-wave hamachi, ringed with jalapeños and glittering with cilantro microgreens.

It's been six years since Wayne Conwell opened Sushi Sasa, bringing to Denver the new-style Japanese cuisine he'd learned under Iron Chef Morimoto. Six years of dishes punched up with the influences of Italy and France, six years of stellar fish, six years of imaginative omakase menus exploring the best Japanese cuisine the city has to offer. Six years of Conwell staying spot-on in his execution of everything from tenderloin to toro. But last year, Sushi Sasa gave us even more reason to love it: Conwell expanded the sleek, intimate dining room, more than doubling the number it could seat. And though reservations are still required, making them months in advance is not. 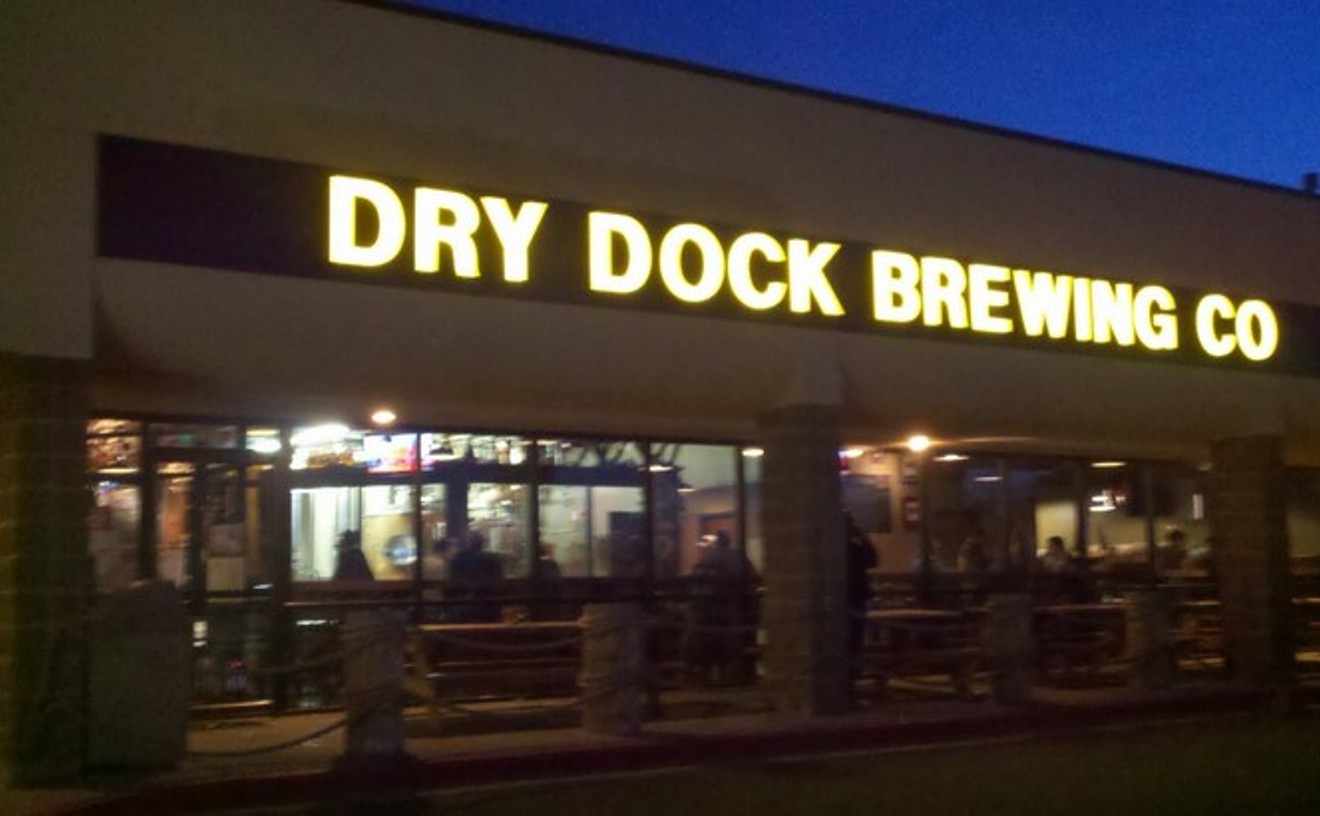 Like a fresh beer poured quickly, Dry Dock's tap room has foamed up and over the sides in the past two years, attracting a regular clientele from Aurora as well as a steady stream of beer pilgrims who make the journey from the city to the suburbs. In fact, the brewery, tap room and attached home-brew shop are so popular that Dry Dock just doubled its size (to 170 seats), blowing out walls and adding space in the strip mall where it's located. The tap house also installed a fireplace and a barrel-aging section proudly displayed along an entire wall. With an ever-rotating list of eight to ten beers on tap — made right on location — and a roster of special events, Dry Dock is the perfect place to make port. 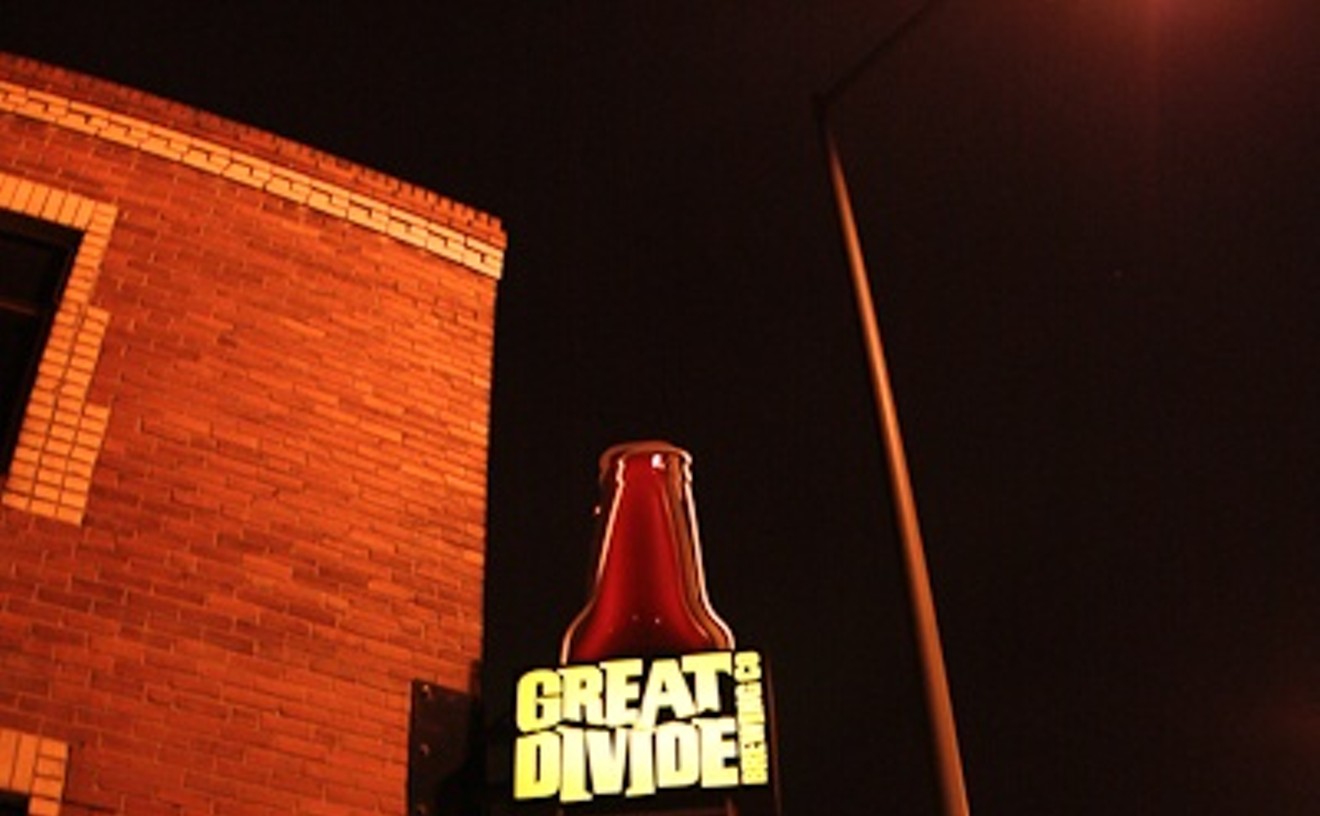 If Denver were a brew kettle, then the Great Divide Tap Room would be the brilliant flame (or heating coils) that makes it cook. Drop in for a pint and you'll find not only some of the best craft beer that this city has to offer, but rousing conversations about beer, bars and breweries from an ever-rotating roster of people who simply love hops, malt and yeast. Small and cozy on winter nights, relaxing and airy in the summer, Great Divide's tap room is almost always packed with people who love to toast the city's suds.

Surin Thanon is a native of Chiang Mai in northern Thailand, and she brings her capable touch to everything on the menu at Thai Flavor, which includes such standards as pad Thai and Thai curries, as well as specialties from her home — with some, like certain whole-fish dishes, that aren't even translated into English. The fresh green papaya salad, tangy tom yum goong soup and stir-fried noodle offerings are standouts, but the biggest draw is the curries, which are simultaneously hearty and delicate; sweet, savory and spicy; and complexly layered with garlic, ginger, woody galangal and piney lemongrass. Thickened with coconut milk, they're laced with racy green or red Thai chiles (grown in Thanon's garden) or toasted cumin and topped with a smattering of sweet-tart kaffir lime leaves or a few sprigs of fresh basil. Denver has had Thai restaurants for decades, but with Thai Flavor, it finally got a superb Thai restaurant. 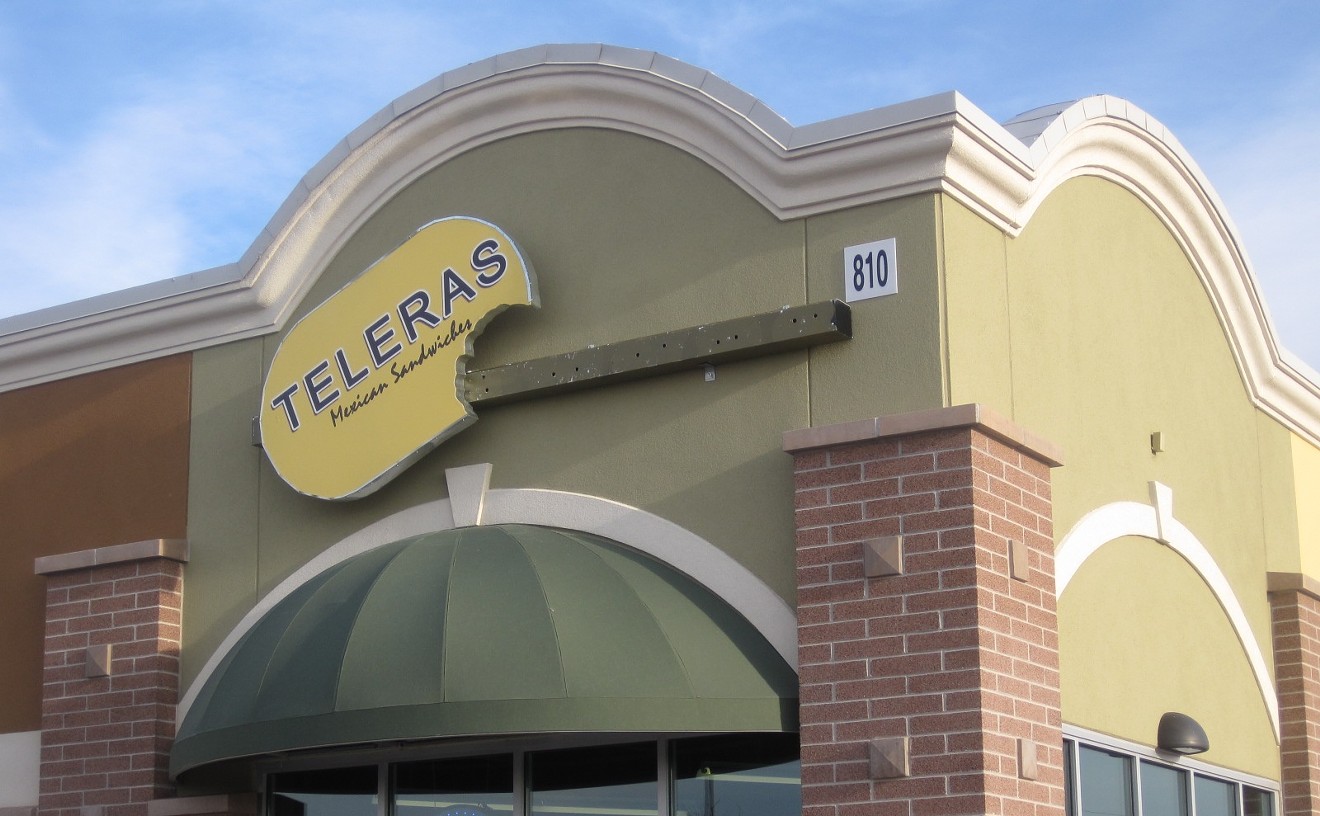 The chalkboard menu at this sparsely decorated strip-mall temple to tortas lists nearly two-dozen manifestations of the celebrated Mexican sandwich, including la mamalona, a hedonistic beast heaped with breaded steak, hot dogs, pork chops, ham, chorizo, chicken, Oaxacan cheese, pineapple, frijoles refritos, avocado, onions, tomatoes, a smear of chipotle mayonnaise (whew!) and whatever else you want lobbed between two slices of dense, house-baked bread. But it's the much smaller la poblana torta, studded with nubs of whisper-tender chicken slicked with a terrifically smoky mole, that really separates this joint from the competition. That, and the fact that nothing except the refried beans and the pickled jalapeños comes from a can. "The way we make our tortas is authentic. We don't make the Americanized versions. We cook them like they do in Mexico City," insists owner JuanCarlos Wong. Authentic or not, we like the way they roll.

Although on the surface it might seem easy to procure a vegetarian version of this popular Vietnamese soup, the deep, flavorful broth is traditionally made with beef. The ever-popular Pho 95 has the solution: pho that can be ordered either with beef broth (for culinary purists) or made-to-order vegetable broth (for dietary purists). Loaded with still-crunchy broccoli florets, carrot slices, sugar snap peas and a heaping helping of rice noodles, the vegan-friendly pho chay comes with crispy-on-the-outside, creamy-on-the-inside fried tofu and a giant pile of fresh add-ons — from Thai basil to crunchy bean sprouts to thick-sliced jalapeños and dandelion leaves — to further flavor your pho. This soup is so tasty that even tried-and-true carnivores might find themselves ordering the veggie version — just this once. We won't tell.

Sputnik's fire-roasted, homemade green chile comes in both pork and vegan varieties, and although the pork version is tasty, the vegan green chile is spectacular. Served with corn tortillas on the side, it's everything a green chile should be: thick, filling and mouth-watering, redolent with smoky green chiles and a mild heat that lingers on the lips. You can order it in a bowl, as a side dish or topping Sputnik's infamous Hangover Breakfast (also vegan-optional), with no fear of chicken or beef broth lurking in the mixture. This is one green chile guaranteed to fill your belly and earn you karma points. 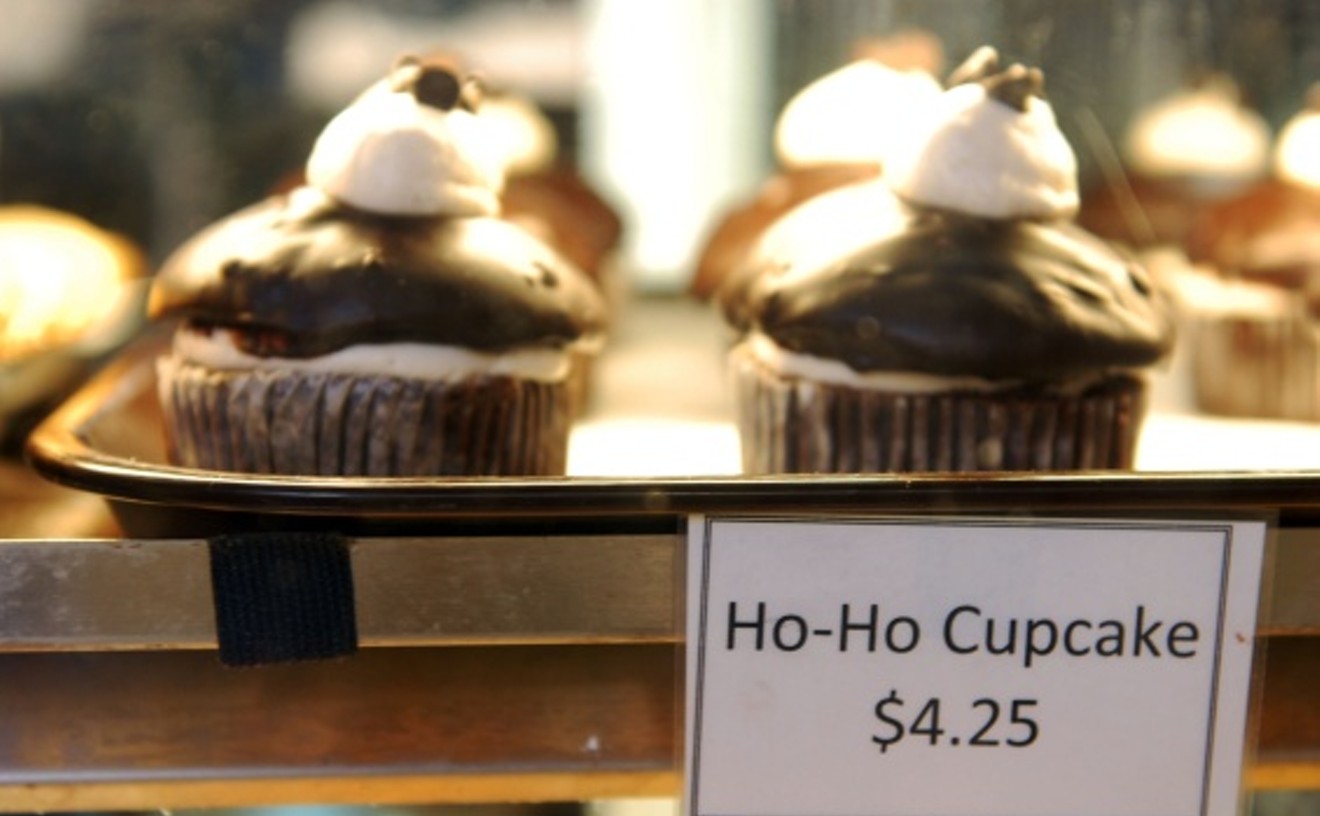 There are some fantastic vegetarian restaurants in this town, but City, O' City rises above them all, boosted by several things. The first? The atmosphere is that of a slightly divey neighborhood bar — albeit one with excellent food, a vast wine and beer list, free Wi-Fi and couches in the corner that make visitors feel free to spend hours tapping away on laptops while snacking on appetizers and sipping on beverages. The second: It's open for breakfast, lunch and dinner, offering dozens of vegetarian and vegan options at all hours of the day. The third: The thin-crust pizza is oven-baked until black bubbles form on the crust — and with so many meat replacements and topping options (including vegan cheese), you can build your own dream pizza in ten- or eighteen-inch sizes. (There are also a half-dozen specialties.) And fourth: The WaterCourse bakery is attached, so there are always tasty baked goods at the front counter, where you can also take advantage of City, O' City's espresso machine. With new head chef Brendan Doyle on staff and an expansion into the former hair salon space next door, we see an endless stretch of reasons to love City, O' City.

Park Burger's housemade veggie patty is a mash-up of grains that's smashed on the grill — giving it the juicy, messy characteristics of a smashburger, but without the beef. The burgers are served in wire baskets lined with paper and topped with lettuce, tomato, onion and a special burger sauce (which tastes a lot like Thousand Island dressing), and from there it's up to you. Other vegetarian topping options include several kinds of cheese, a fried egg, guacamole, mushrooms, onions and jalapeños — and those watching their carb intakes can even order the burger on a whole-wheat bun for an additional charge. (Fair warning: It's not vegan.) Served with Park Burger's shoestring sweet-potato or regular fries (crispy and sprinkled with coarse salt), this is one veggie burger that doesn't taste like a compromise.