While sampling the finest sushi and omakase in Denver, you might not come across many generous happy hours. Ototo, dipping into the tradition of its Pearl Street sisters Sushi Den and Izakaya Den, is a surprising exception. Roaring back from the dead in mid-2015, Ototo immediately released a kaiju-sized happy-hour menu that shows off the restaurant's eclectic and cozy fare, served Wednesday and Thursday from 4:30 to 5:30 p.m. and 9:30 to 10 p.m. (both end one hour later on weekends). Scallops and enoki mushrooms from the charcoal-fired robata grill ($5 each) are wrapped in bacon and simply skewered, paired with $4 draft beers, half-price wines and hot sakes to keep the vibe lively. Crisply seared gyoza ($4) represent Ototo's classic roots, while sublime Japanese fried chicken expands on a very welcome trend. It's a happy hour that's true to the communal robata spirit, and a refreshing successor to the Den lineage. Since longtime Denver chef Matt Selby — known for his cutting-edge kitchen work at Vesta Dipping Grill, Ace and Steuben's — came on board as a consultant in November 2015, Brik on York has been hitting its stride. With Selby's help, owner and level-two certified sommelier Travis Gee revamped the erratic menu, and the result is a lineup of delectable dishes — chile-spiked sizzling garlic shrimp, wood-fired Brussels sprouts, truffle-scented popcorn dusted with pecorino — that pair beautifully with wine. And what a wine list it is: eight pages of old- and new-world choices, available from the half-glass on up to a full bottle and poured using either the Enomatic or Coravin systems to maintain quality and prevent oxidation, with insider info on the regions providing context and Gee himself often stopping by to share his take. The wine bar and pizzeria (all of the pies are wood-fired, with scissors provided to cut your own pieces) sits in a 1905 building in the Wyman Historic District, and its motley past — including time as a matinee theater and a watch-repair shop — imbues the setting with a sense of bygone times that enhances the wine experience. Those who aren't into wine can enjoy the dozen or so beers available or a well-made cocktail, and late-night live music from local bands is a nice touch.

It's no surprise that a farm-to-table restaurant devoted to deliberate sourcing would also offer wines — from a 27-page list, by the way — that have been carefully and individually chosen for their ability to pair properly with the elegant Boulder bistro's imaginative menu. But Black Cat's wine collection, usually comprising between 300 and 400 options from around the globe and chosen by general manager and beverage director Dev Ranjan, goes beyond a mere gathering of good and great wines. Ranjan seeks out exceptionally rare and older-vintage examples, and the restaurant's Coravin system allows unique wines — say, the 2011 Mauro Molino Barolo "Gallinotto," or La Follette's 2012 Sangiacomo Vineyard chardonnay — to be offered by the glass. Black Cat also features an unusually long list of grower Champagnes by the half and full bottle, and the bistro's commitment to farmers even extends to a namesake wine from Colorado: Black Cat has co-developed a full-bodied meritage with Boulder-based Bookcliff Vineyards. Without being pretentious or overly scientific, the wine list is sprinkled with truly helpful explanations of things like what natural wine really is and why biodynamics are important and how terroir affects outcomes. Drink and learn. 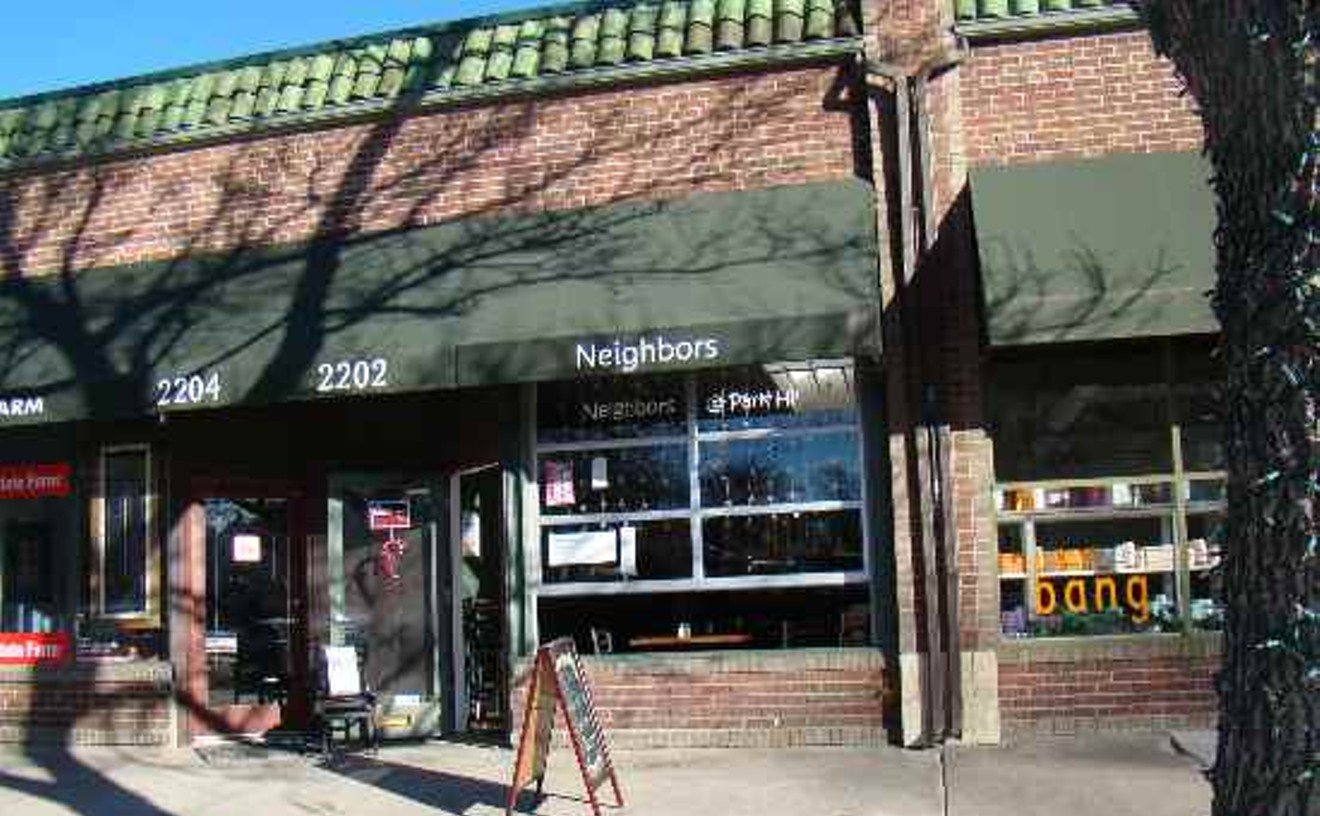 To find a by-the-glass wine list that features forty-some options — including such interesting and uncommon selections as the Hemanos Torrontes from Salta, Argentina, or Oregon's Angela Estate Pinot Noir, as well as better-known vintages, like Pennywise's cabernet sauvignon from California or Shingleback's Red Knot shiraz from Australia — is always a treat. To find it in the congenial and homey locale that is Neighbors is nothing short of wonderful. In the four years since this Park Hill cafe opened, not only has the neighborhood embraced the eclectic eatery, but diners seeking tapas-style snacks paired with the smartly chosen wine list have made it a destination, as well. The wine flights are especially fun, offering tastes of Spain or "juicy reds" in three two-ounce pours. Prices are spot-on for the selections and the setting, and whether you opt for a cheese or meat plate or one of the small shared plates, the staff will know exactly which glass of wine will hit the spot. 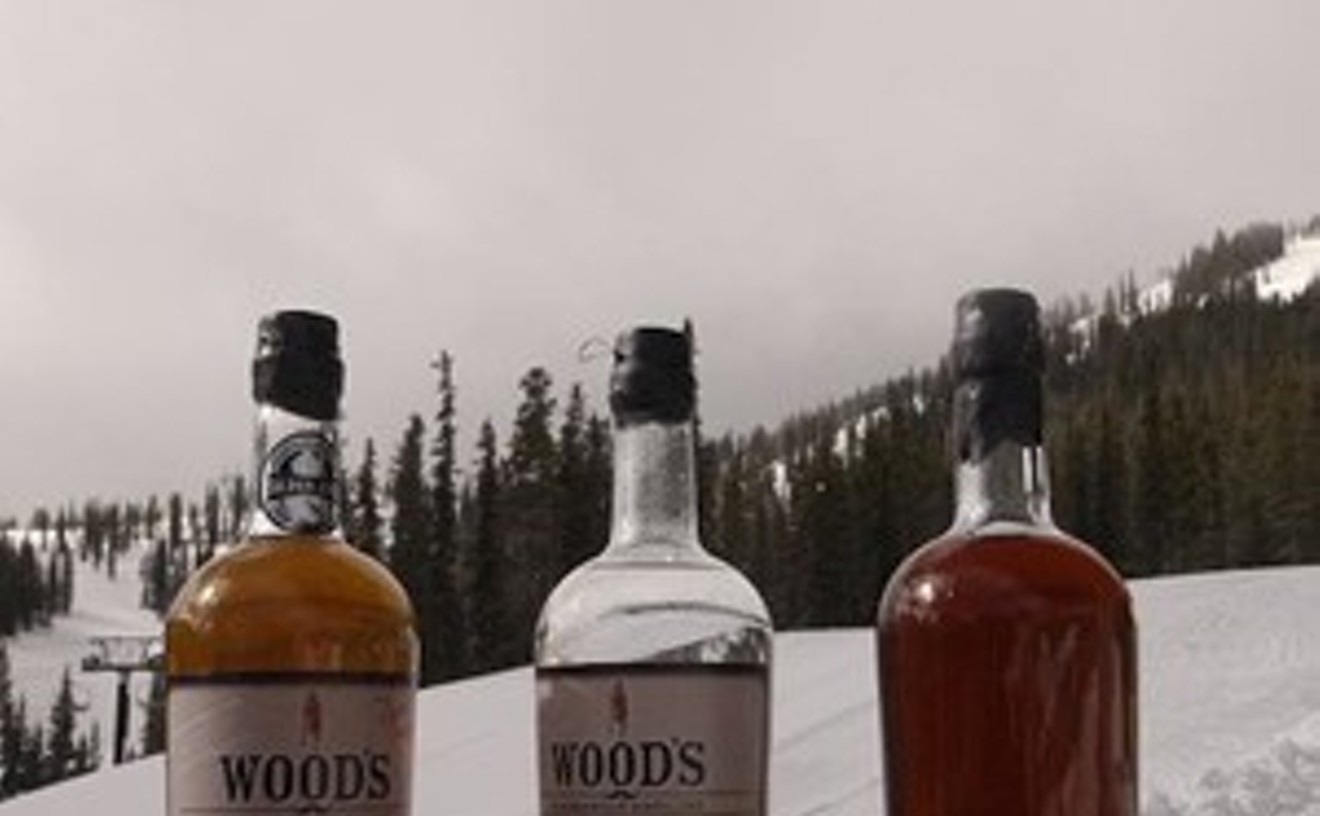 As any whiskey snob knows, "single malt" is a bit of a misnomer. Wood's Tenderfoot Whiskey is actually a combination of three barley malts, with a pinch of rye malt and wheat malt — but all blended at a single distillery, aged in American oak and bottled at 90 proof. Since that distillery is in Salida, "local" is admittedly a term of art, too. But since you can get this distinctive, smooth-but-smoky high-country libation at a number of local liquor stores, there's no need to drive 140 miles to the tasting room for a sampler of Wood's whiskey, rye and gin — although that does sound like a tasty idea.

In the early 2000s, distiller Stephen Gould became fascinated with absinthe. When the U.S. government allowed the infamous herbal spirit to be made and sold in America, in 2007, he began to distill it on antique stills that he had accumulated in his garage. That hobby distilling business eventually turned into Golden Moon Distillery, founded in 2008, and its current line of eighteen spirits, including the original absinthe. Those spirits represent an eclectic family — Golden Moon distills products that most distillers don't, such as crème de violette, amer dit picon and grappa. All of Golden Moon's spirits are made with Gould's skillful hand, with no artificial ingredients and a painstaking adherence to traditional distilling methods, often dating back to the 1800s. Gould cleverly planned his production so that his entire line of spirits would make up a complete backbar, which is exactly how they're used to make craft cocktails across town at the Golden Moon Speakeasy. 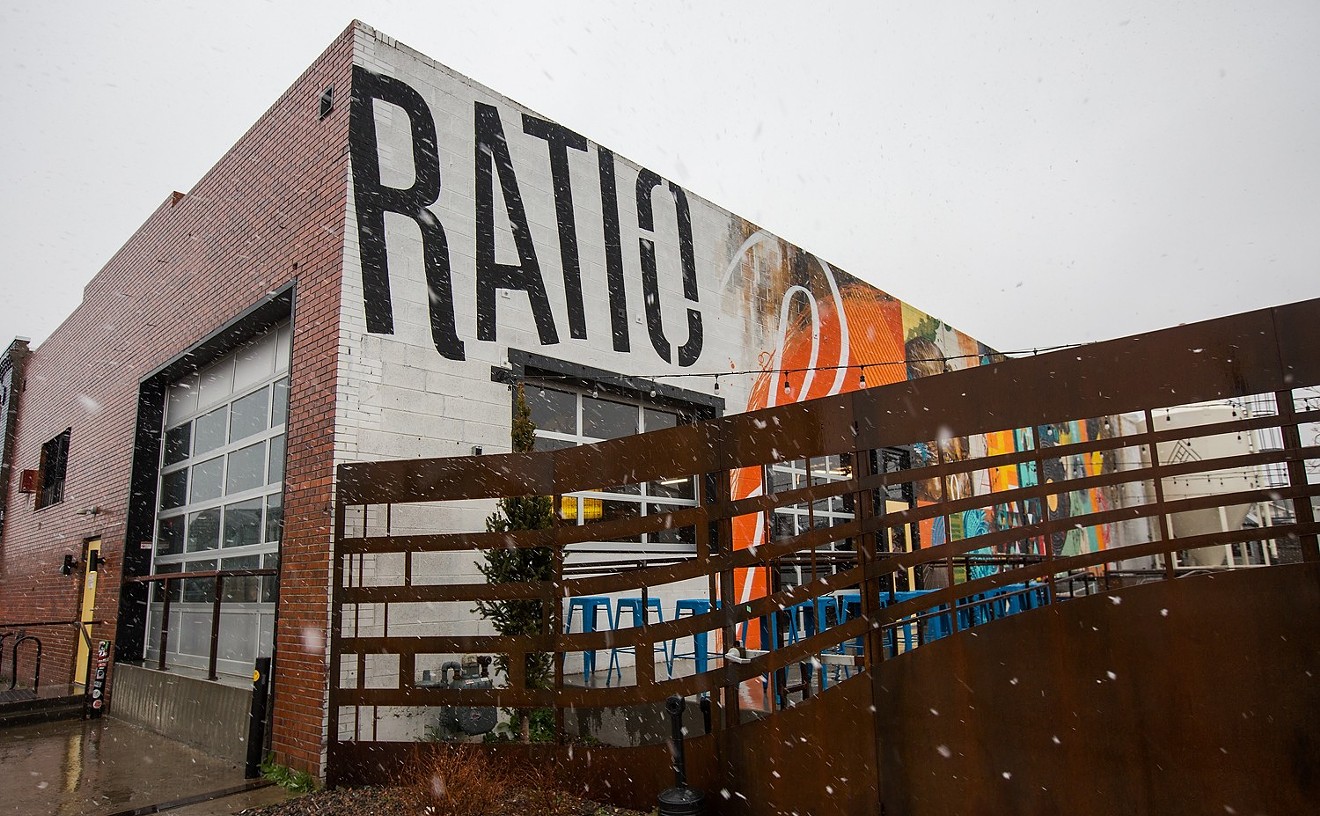 Opening in brewery-hot River North in February 2015, Ratio Beerworks combined all the right elements in just the right way. The owners started off with a big twenty-barrel brewhouse, an ethos steeped in music, and a mod interior design featuring retro-diner bar stools, a striking wall covering, copper pendant lights and neon touches. Topping it off is a beer menu that looks like a concert-venue marquee. Since then, they've only built on their success, adding a carefully detailed patio, live music, bottle releases and an electric vibe. But the beer is the glue that holds Ratio together; the tap list includes a mix of solidly produced classics, like Dear You (a French saison) and Hold Steady (a Scotch ale), along with a variety of specialties, like Genius Wizard (a Russian imperial stout) and One Great City (a Belgian-style quadrupel) that show both good brewing technique and creative flair. 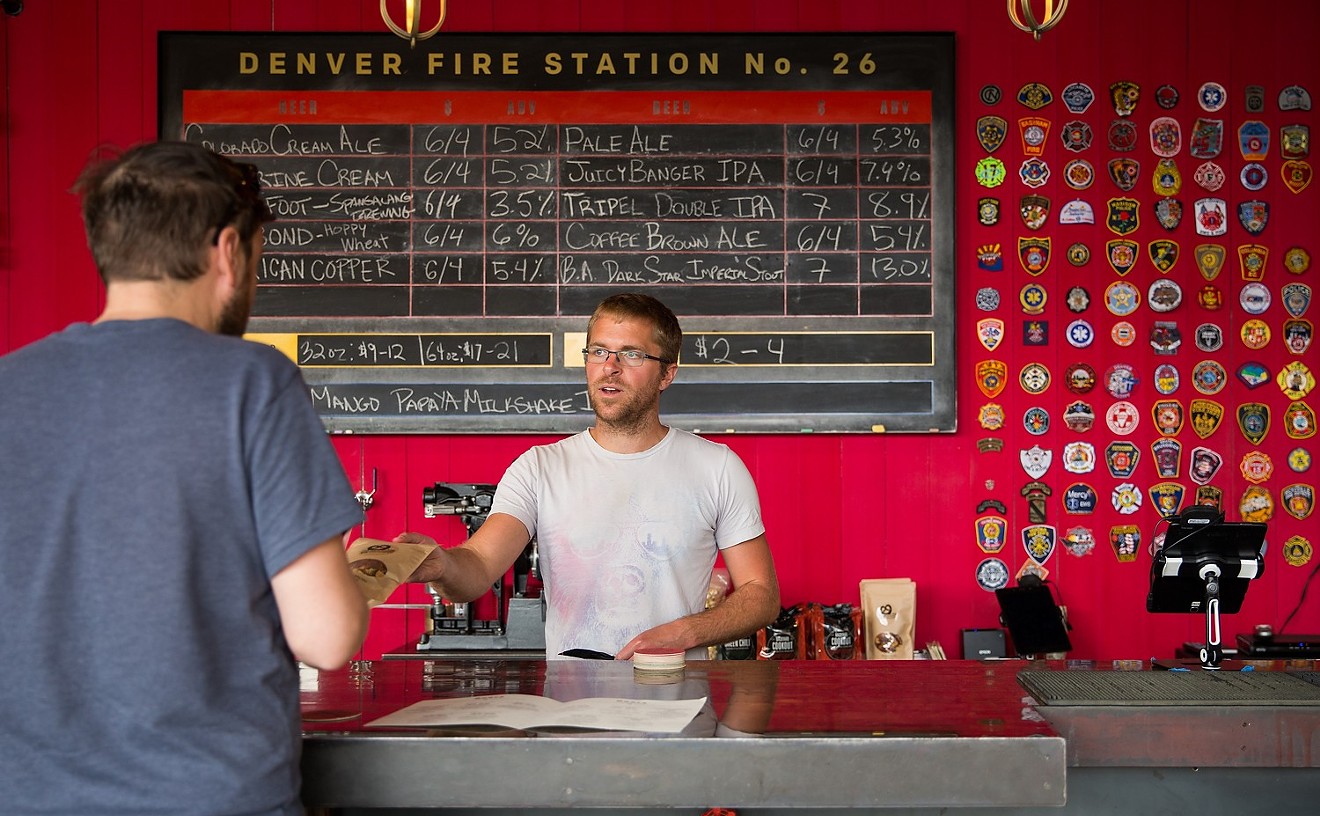 Station 26 opened strong in December 2013 in an old firehouse in northeast Park Hill with a tap list that ranged widely across styles and ingredients, but with a consistent quality and reliability that made the brewery seem like it had been around for years. Since then, owner Justin Baccary and head brewer Wayne Waananen have scored hit after hit, whether with one-off collaboration beers, their Dark Star Imperial Stout, or seemingly endless variations on pale ales, IPAs and double IPAs — each one better than the last. In 2015, the brewery debuted the first two in what will be a series of canned single-hop IPAs, Citra and Chinook, and both deserve to be mentioned with the best IPAs made in Colorado. 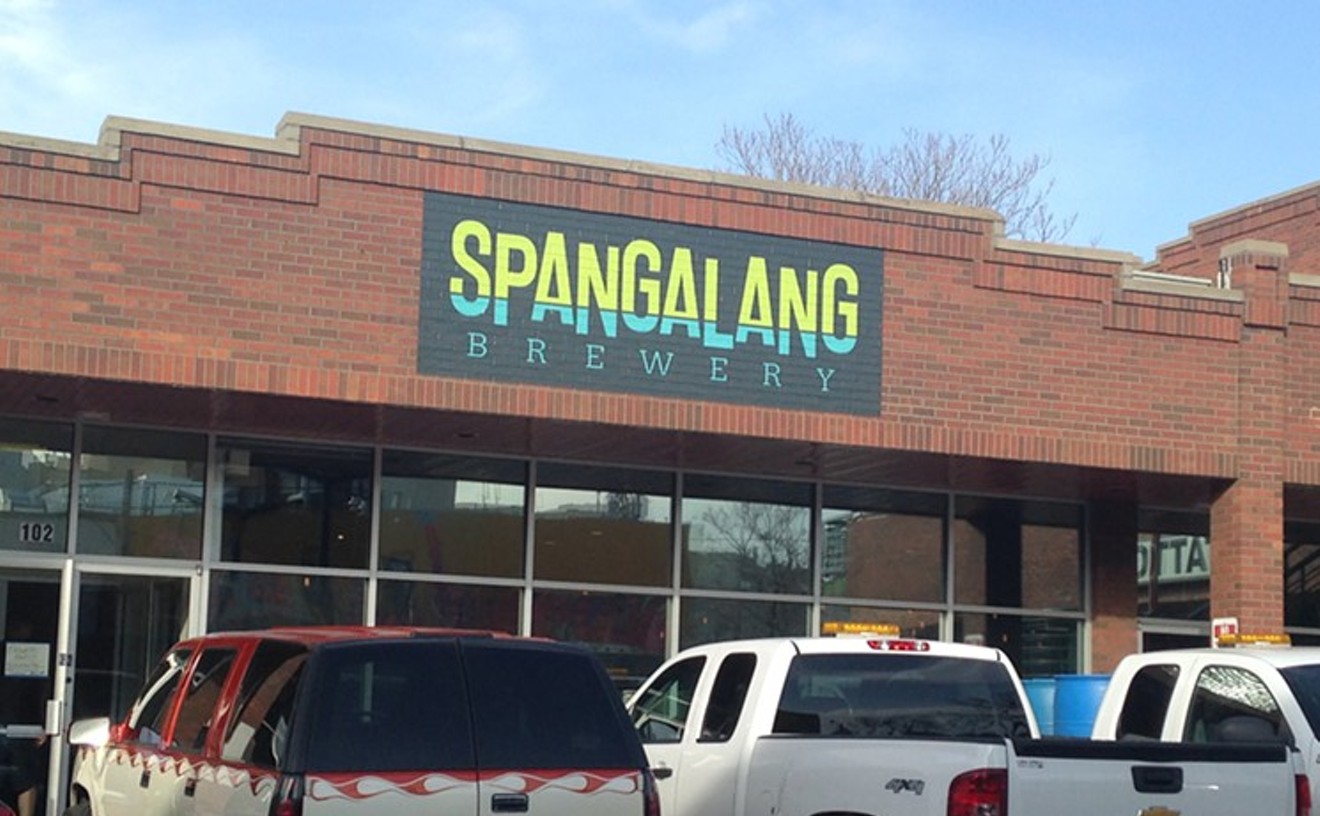 To consider why the atmosphere at Spangalang Brewery is so good, one must first consider how far the building in which it is located has come: Until last year, it was a busy, busy Division of Motor Vehicles office where people from all over the city gathered to wait in long lines, argue with beleaguered DMV employees and cough on one another. But the ambience at Spangalang is truly the result of careful work by its owners, who invested a jazz theme into the brewery as an homage to the history of Five Points. And although that history also includes several recent decades of neglect, that's changing in a big way as developers pour into the old neighborhood to redirect its future. Spangalang, with its long bar, excellent beer and recognition of its surroundings, will be a big part of that future. 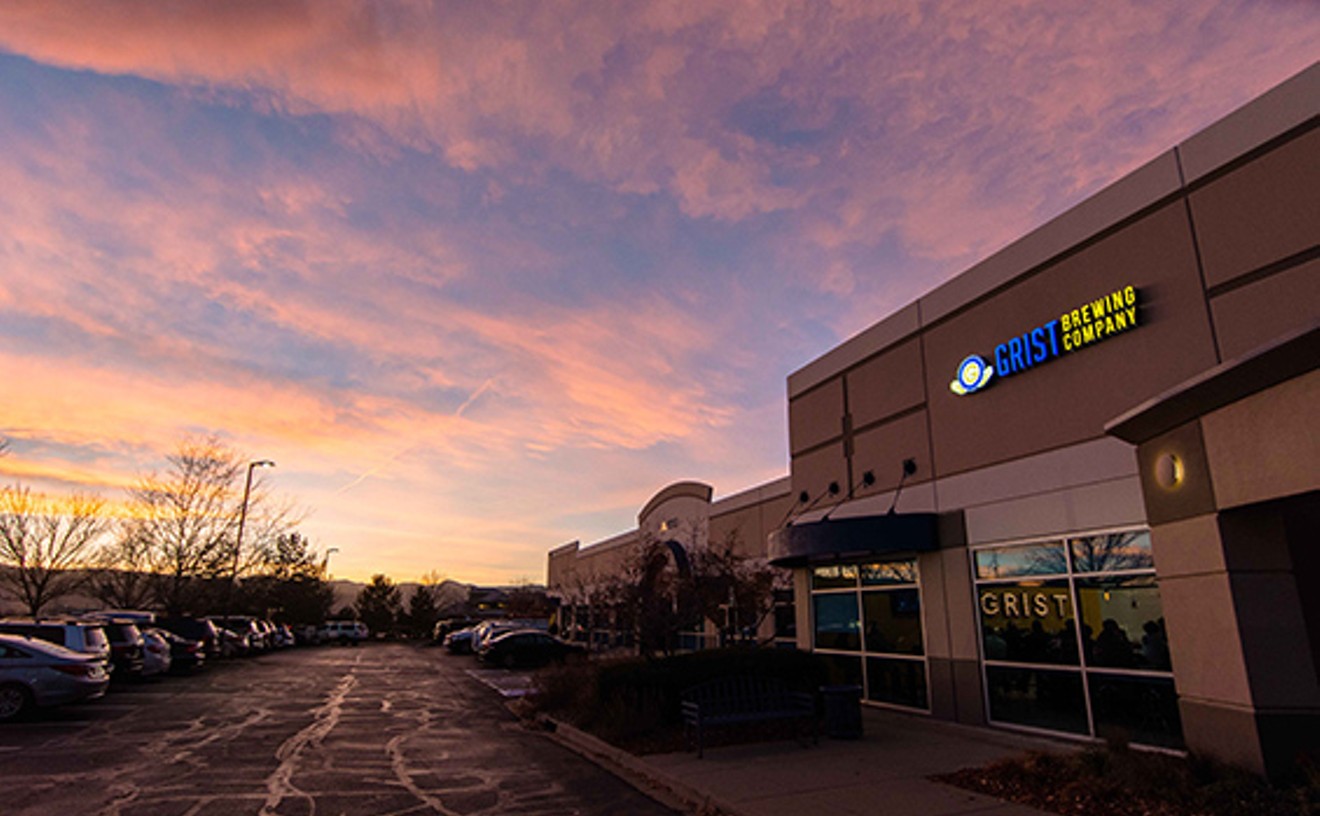 Rob Kevwitch opened Grist Brewing in Highlands Ranch for two reasons: "I grew up here," he says, and "this neighborhood needed a brewery." With a Ph.D. in organic chemistry, Kevwitch studied "photodegradable dendrimer/polymeric systems" under a guy who studied under a Nobel Prize winner. Now he runs a brewery. Overqualified? Hardly. Making beer, especially good beer, takes a balance of science and creativity, and Kevwitch pours his heart into both — something symbolized by an actual balance (his grandfather's) that hangs on the wall. And speaking of creative decor, Grist is packed with charm. A huge rectangular bar sits as the centerpiece of a tap room that includes flat-screen TVs, a multi-colored neon sign, a counter-pressure growler filler, a Crowler machine and fermentation tanks that sit so close to customers that they can touch them — but please don't. Drink at Grist: You'll feel smarter.