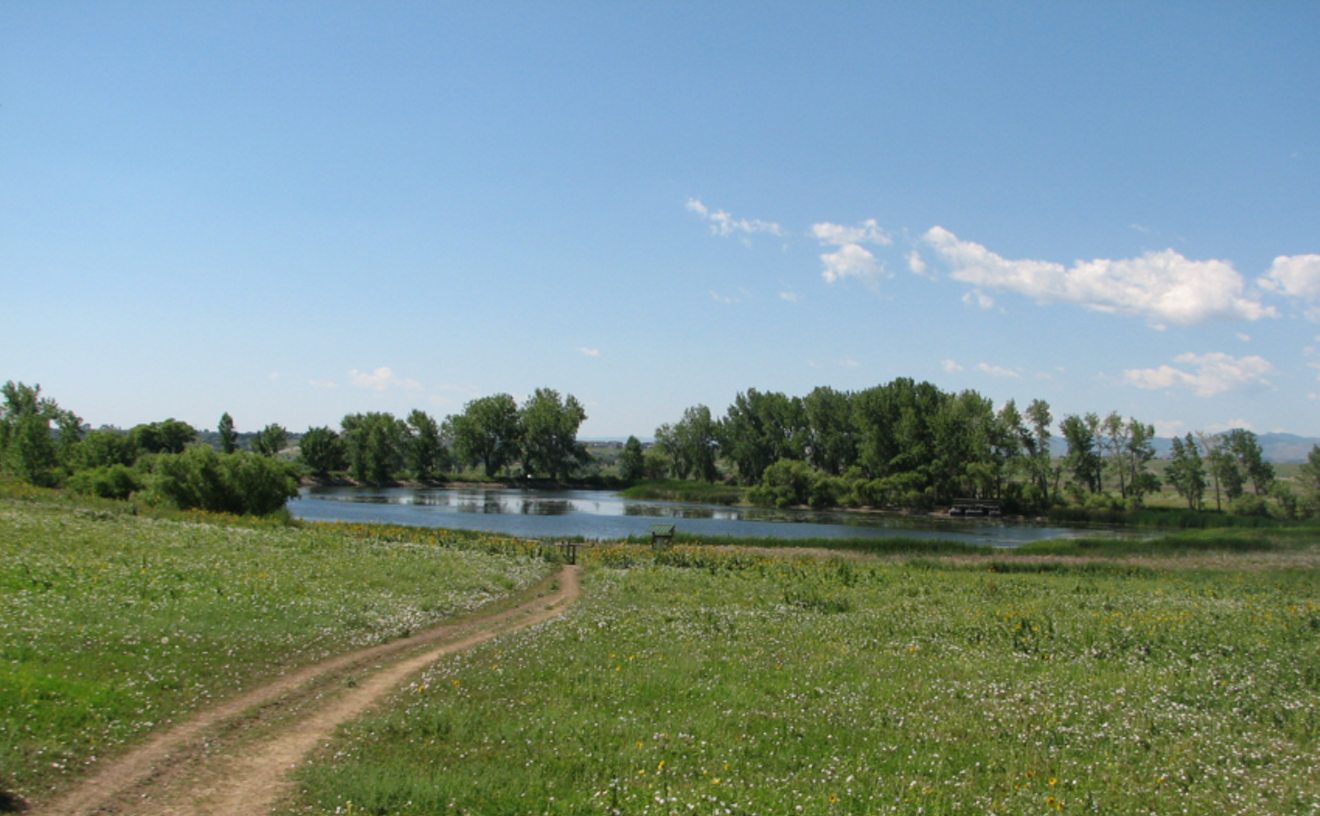 The winner in 2017, Westminster Hills is still the champ. Dogs love it for its muddy canal and swimming ponds, its 420 acres of meandering trails and wide-open roaming space, its drinking fountain, and its opportunities to chase the occasional prairie dog. Their people love the shady benches, the gorgeous views of the Front Range, the hiking feel of the space, and the fact that pups usually pass out from exhaustion soon after they leave. The park is kept extra-clean by regular poop-pickup events, and abundant baggies and trash cans help, too. If Fido is a bolter, be aware that there are fenceless areas, but it's easy to avoid them if you head toward the center. Not enough of a workout? Put the leash back on and head to nearby Standley Lake. 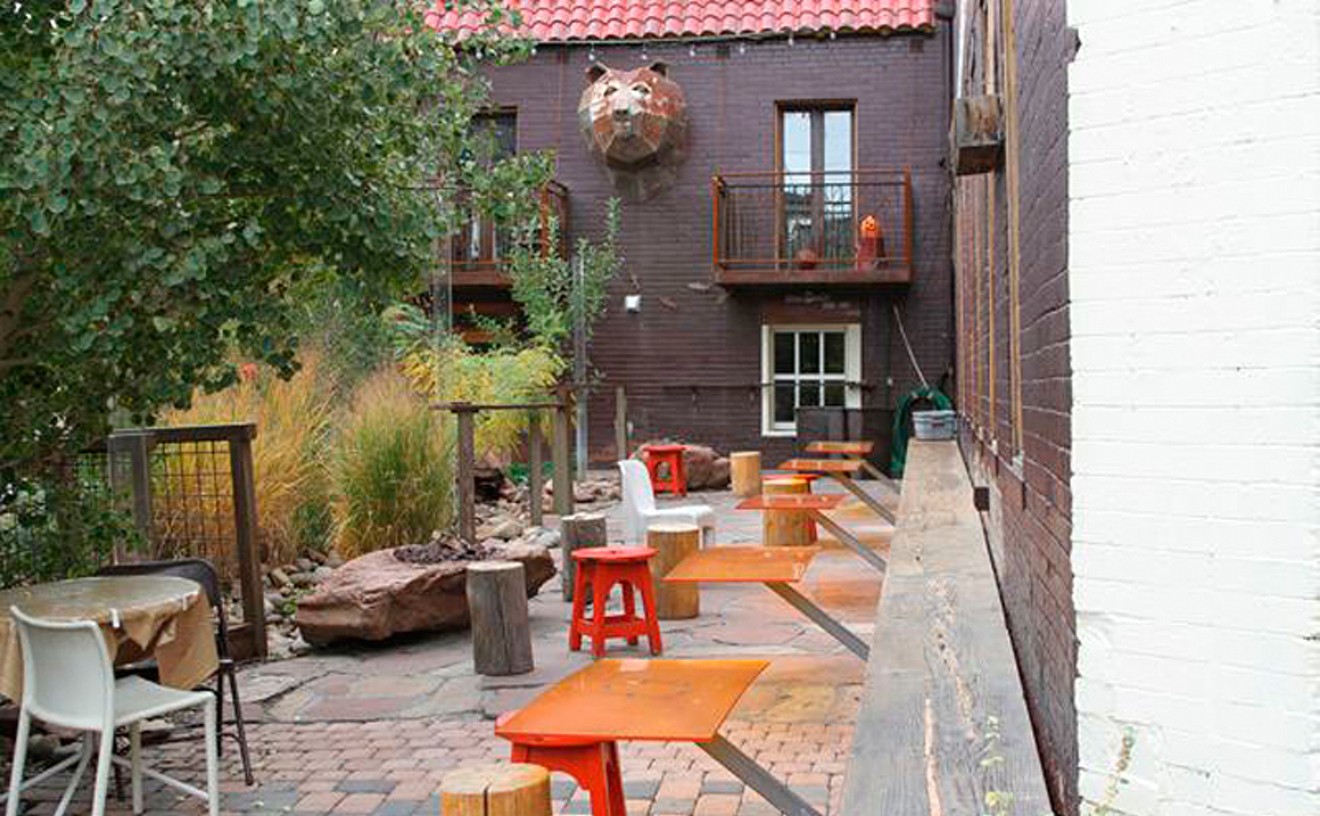 A good dog bar should first and foremost be a fun place for all involved, and Forest Room 5 fits that description and then some. With a pet-friendly outdoor space designed to resemble a campfire circle — albeit one with comfy hewn-log seats, a little stream running through it, and the fire itself nestled in lava rocks — and meats on the grill making pooches and their humans drool, this happy-hour hot spot is convivial and laid-back, and the staff is particularly accommodating of furry friends. The medium-crust pizzas, the gooey mac and cheese made salty with bacon, and the freshly steeped sangria are all stellar. 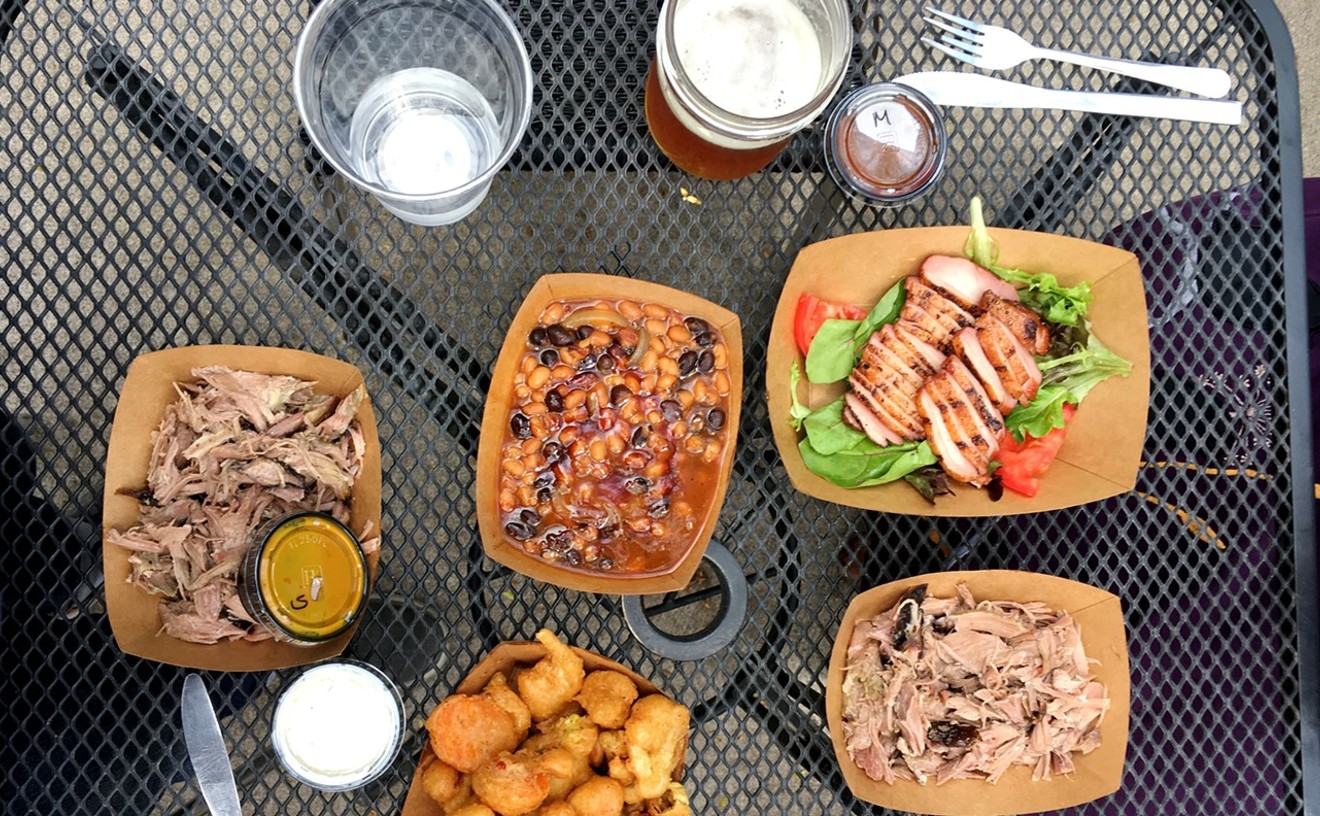 Open Thursday through Sunday only, the super-friendly Switchback is perfect for pooches and their people fresh off a hike and hungry — particularly those following a Paleo diet. The pets-welcome patio offers picnic tables and a picturesque setting next to Bear Creek, and the smokehouse results in some of the best barbecue around, from sweet-and-salty smoked bacon to juicy smoked duck to peppery, paper-thin brisket (get the grilled asparagus, too). Spot is never going to love you more than when you're slipping him some of your 'cue — if you can bring yourself to share. 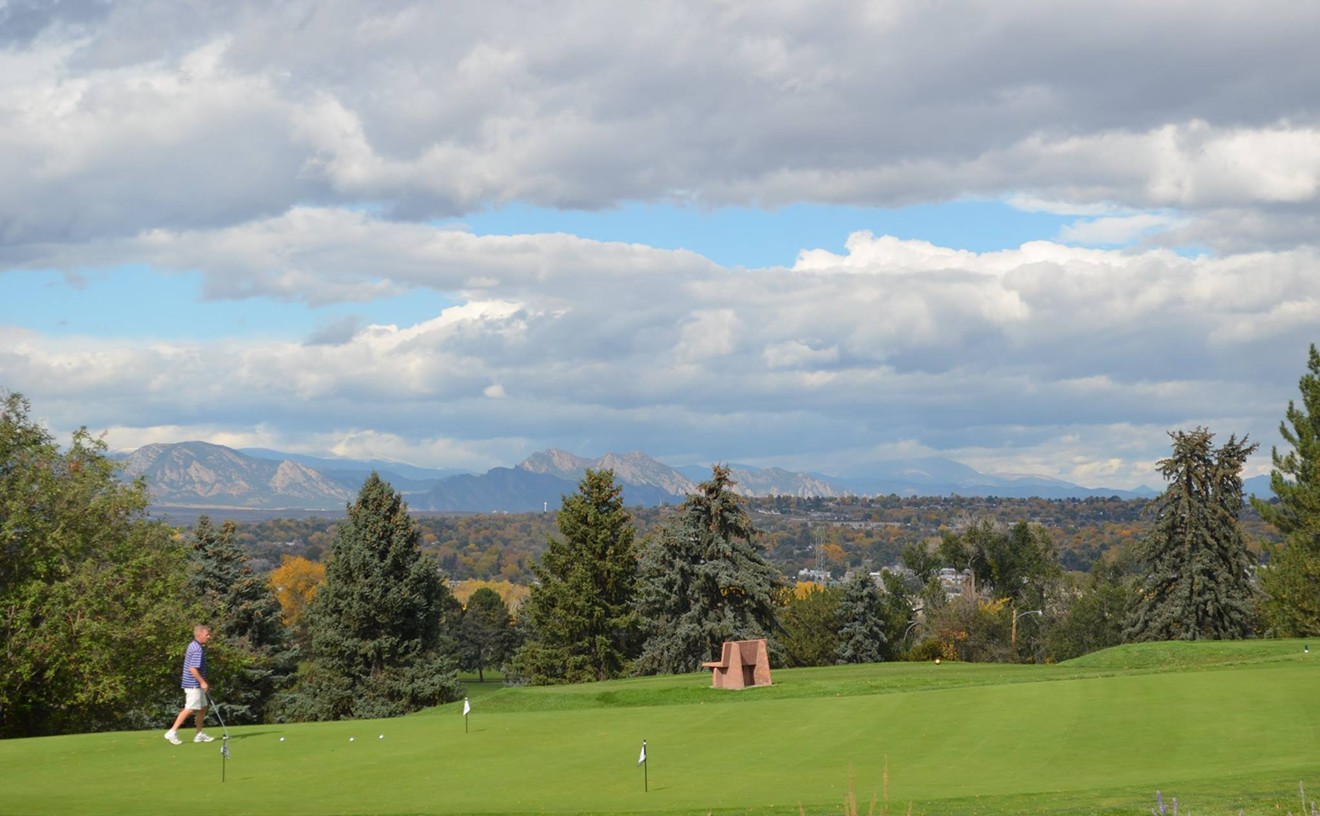 Over the years, Willis Case has done nothing but improve, from a $4 million clubhouse remodel to a more recent upgrade to the on-course bathrooms. Less than ten minutes from downtown, the entire course, part of the Denver Golf family, offers a view that spans the Front Range from Pikes Peak to Longs, which makes for some spectacular play (good luck concentrating on the ball after the panorama of the first tee). This is kind of an everyman course, though; the medium-slow greens, open fairways and no water make it hard to lose a ball here, and lavish landscaping all around, plus strong stands of pine that provide shady rest stops and plenty of parking, add up to an above-par experience. Not to mention that the fees are $28 weekdays and $40 on weekends.

Best Golf Course in the Mountains

Tom Lehman revamped the original Arthur Hills design of this Glenwood Springs gem in 2014, which resulted in cutting back the bunkers from seventy to forty and a kinder, gentler back nine (though still a rugged series that starts off with four holes known as the "Lost Horizon"). In stark contrast to the meadows of the front nine, the back comes with rock walls, a drive across a ravine, deep gullies and jaw-dropping views across the Roaring Fork Valley, including of Mount Sopris. You'll get more of a workout here than golf is known for — the steep course, with its fast greens and sweeping slopes, gains 495 vertical feet before the twelfth tee — and be prepared for the sand, water and tall grasses that will try to take your ball. The only public course in Glenwood Springs, Ironbridge is also meticulously maintained, and the practice facility is top-notch. Also, did we mention that it's in Glenwood Springs? There's a soak in your future. We're talking about new arrivals here, because the aptly named Colorado Journey is a little trip through some of the Centennial State's best-known attractions. Two eighteen-hole courses, each xeriscaped with native plants and individually themed, depict must-see spots for the just-arrived, including Garden of the Gods, the Mesa Verde cliff dwellings, Eisenhower Tunnel, St. Elmo and the Cripple Creek Mine. Some holes have water features or other hazards, and the scorecards offer reading material on the sites, so you can get educated while your friend takes forever lining up a shot. Check it out at sunset, another Colorado icon, and don't forget to take notes on which places you want to visit soon. 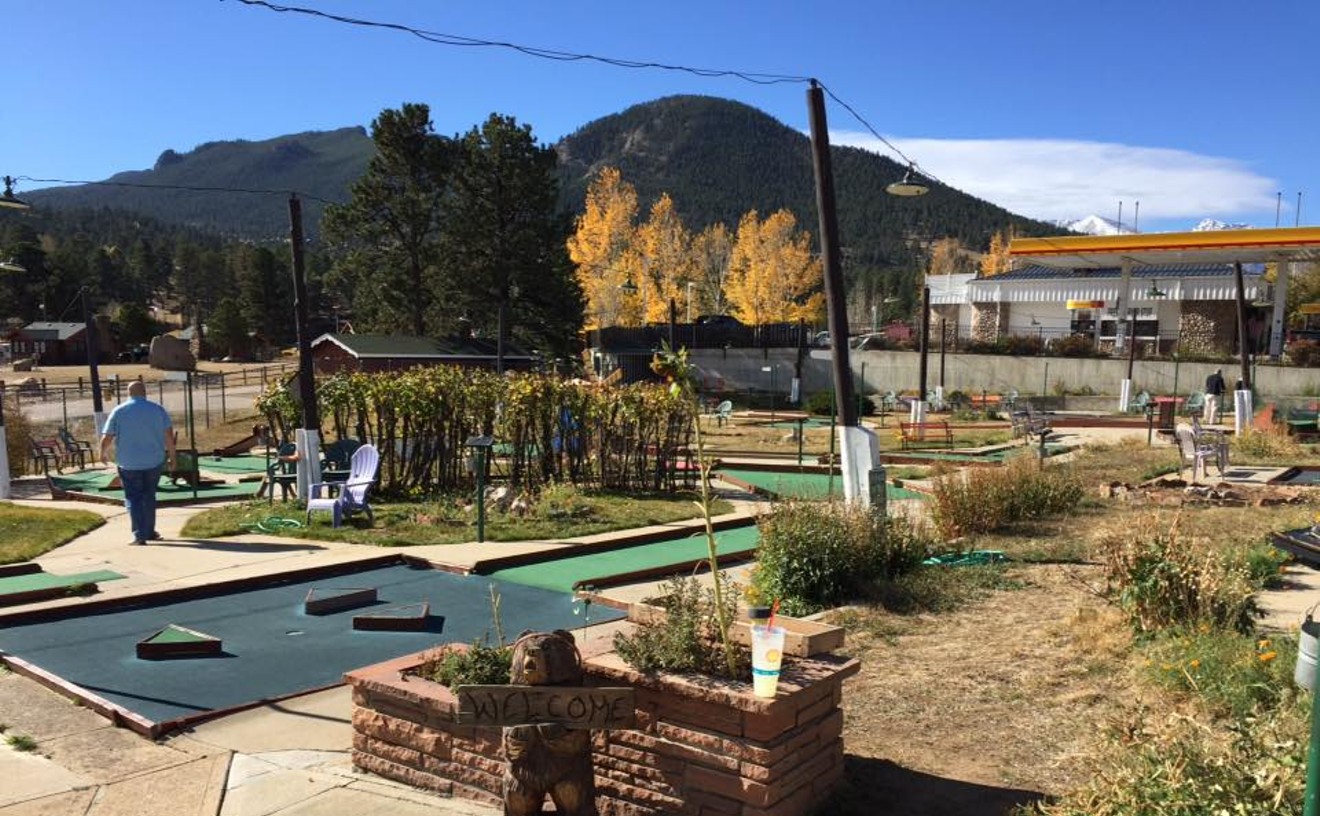 Tiny Town Miniature Golf is a native, too, one that for more than sixty years has offered reasonably priced entertainment in what invitingly feels like a 1970s paneled basement of mini-golf courses. The eighteen holes serve up old-school putt-putt scenes like a windmill and a crocodile, but the nineteenth hole is special: A hole in one gets you a free game. Sadly, Bob Mitchell, who started the Tiny Town course in 1965, passed away in 2016; the good news is that nearby Trout Haven Resorts bought it and spent the past year upgrading the site. And the commitment Mitchell had to making mini-golf fun for the whole family is still there in spirit, along with his beloved flower gardens.

What was once the Arapahoe Greenway Trail was renamed in the mid-'90s for Mary Hampton Carter, who as mayor of Bow Mar in the '70s also took over leadership of the South Suburban Park Foundation, helping the organization pave the way for more trails and greenways in the area. Her namesake eight-mile, multi-use path winds through the southern suburbs along the tree-lined South Platte River, between West Dartmouth Avenue in Englewood and Viable Road in Chatfield State Park. Not only does it exemplify the best of urban bike corridors — the foundation stays on top of improvements, recently cutting the number of signs along the trail in half to put in better ones that were more easily understood, adding more parking en route and upgrading crushed-gravel spurs — but it also connects other trails in the Denver metro greenway system, including the South Platte River Trail, the Bear Creek Trail and the C-470 Bikeway. On any given day, you'll find commuters, families, dog-walkers, rollerbladers, you name it. Thanks, Mary.

Ready for a ride you won't forget? Park at the lot for Beverly Heights Park, located at the base of Lookout Mountain Road, to embark on a 4.3-mile, 1,300-foot ascent from downtown Golden to the summit of Lookout Mountain. Arguably the best hill climb in Colorado, this ride was included in the U.S. Pro Challenge not once, but twice. If the 5 and 6 percent grades don't take your breath away, we guarantee the stunning views will. Bonus: The top of the ride is also the site of Buffalo Bill's grave. Cyclists can stop off at the Buffalo Bill Museum and Grave to re-up on water and snacks before zooming downhill, preferably toward Coors Brewery.

Best Bike Path in the Mountains

If you're up for a big ride, the whole Lake Dillon Loop enchilada is 41 miles and goes from Breckenridge to Frisco, around Lake Dillon and on to Keystone, gaining more than 2,000 feet in elevation and pretty much ensuring that you'll need a late-afternoon nap (note that the majority of the uphill comes during the return to Breckenridge). For the less motivated, the 18.6 miles around the lake itself is a lovely ride at half the elevation gain, with the chance to see a moose or two, short but sweet sections through lodgepole pine, and plenty of views of the lake. Numerous spurs offer the chance to add more mileage. The best part, though, is the many options along the way for refueling with good food, coffee or cocktails.