The Ramirez family, which opened the first Los Dos Potrillos in Centennial two decades ago, has always been accommodating. But over the past year, the Ramirezes may have pivoted faster than any other restaurateurs around. When eateries across the state were ordered to cut off in-door dining in March 2020, the family quickly geared up their to-go systems to maximum efficiency, making sure the beers brewed at their Parker brewery were available, as were their big, strong margaritas; pick-up was fast and flawless. And once restaurants could reopen to indoor seating, Los Dos Potrillos pivoted again, adjusting to doing business in three counties in the metro area with different rules, always with a smile...and complete competence. 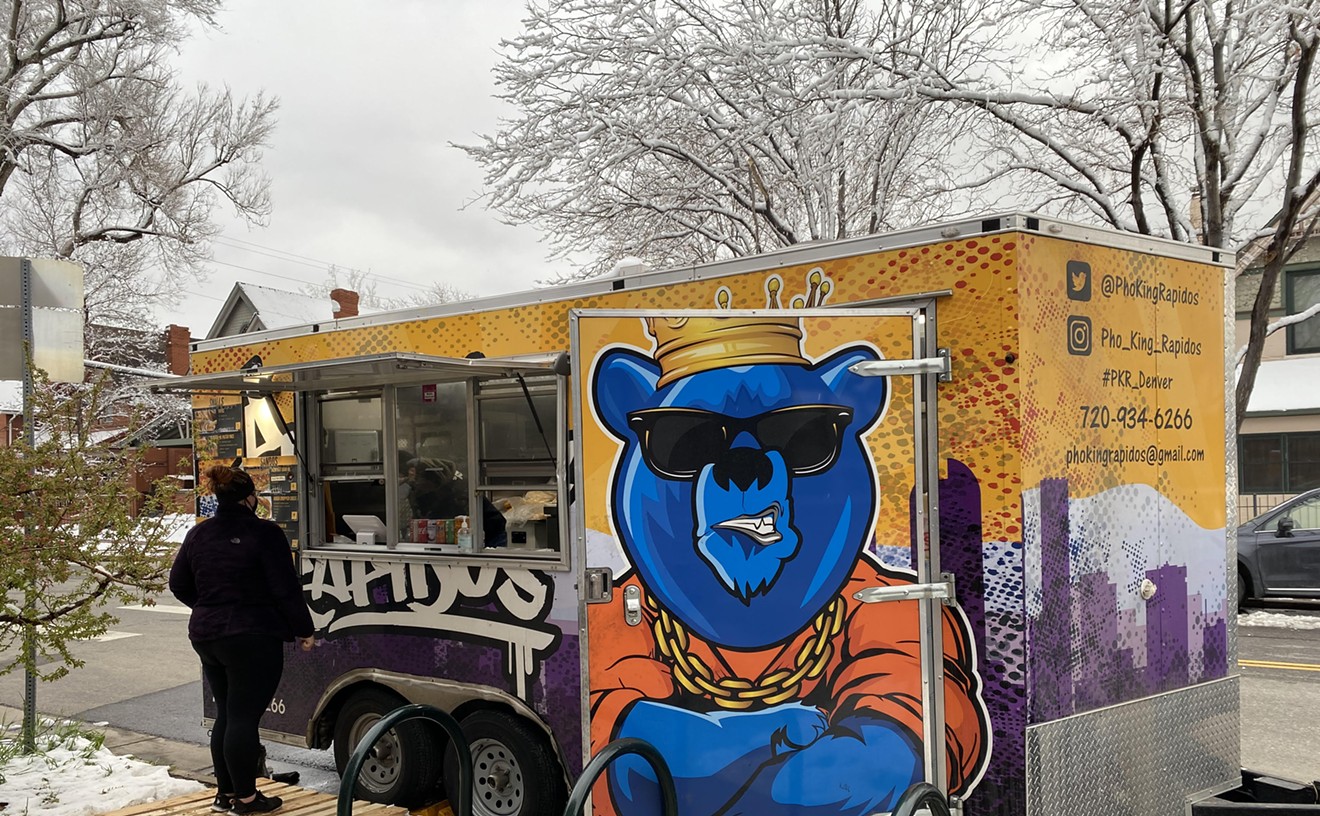 You know you're from Denver when...you don't bat an eye at a Vietnamese-Mexican food truck sporting a big blue bear wearing a gold crown at a rakish angle like Biggie Smalls. The blue bear is an iconic symbol of Denver, the word "Rapidos" a familiar one to west-side residents in need of a late-night taco fix: The smell of pho in that part of town is as common as the whiff of Greeley on a brisk winter night before a snow. Combine them all and you have Pho King Rapidos, launched last year by Long Nguyen and Shauna Seaman as a "Vietnamese-ish" food truck turning out killer bun bo Hue and pho, but also mashing up street food in the form of a birria bo kho (Vietnamese beef stew) banh mi — a cheese-encrusted sandwich that comes with broth for dipping and al pastor fries. Nguyen grew up around Federal Boulevard but has worked in fine dining in New York and Denver; the combination of street cred and culinary chops makes Pho King Rapidos a B.I.G. deal.

When Curt Peterson opened Smith + Canon, his ice cream shop at the corner of York and Colfax, in 2019, he had a near-instant hit on his hands, thanks to a small but dazzling array of flavors that hold something for everyone. Purists will enjoy the bold simplicity of the vanilla or chocolate, both made in an eggless base. Grounded blends such as the peanut butter cup, the Foxy Brown (the house specialty, made with cream cheese and cinnamon) and the butter brickle turn up the volume without getting too wild. And then there are unique flavors like Strawbanero (strawberry and habanero), Dew Sabi (honeydew and wasabi) and El Chupacabra (chocolate and chiles), which blow the mind even as they tantalize the tastebuds. Grab a scoop or two — or a tub to take with you — along with the shop's house coffee beans (roasted by Whiskey Barrel Coffee) for a hot and cold combo at home.

Did chef Tim Dotson invent a new sandwich when he rolled up fillings in springy focaccia and wrapped them tightly in butcher paper? Certainly focaccia sandwiches aren't new, but the Dimeroll, as it's called at Dimestore Delibar, certainly eats like something new, since the fillings form a central core of meaty, saucy goodness, while the outer layer of focaccia adds a texture distinct from standard hoagie buns. The result: craveable creations packed with meatloaf, Italian deli meats, smoked chicken salad or Cubano ingredients (slow-cooked pork, housemade ham, pickles, mustard and cheese) made just a little Hawaiian with the addition of pineapple sauce. More than just a sandwich shop, Dimestore also shakes up some wicked cocktails and even stocks a few groceries and sundries as a neighborhood bodega.

Best Sandwich Shop With a Mission

What's Open? Once you realize that Open is the name of the sandwich shop inside American Bonded, and once you try the sandwiches, you'll be checking all the time to see if Open is open. Jake Reiderer and chef Jonathan Chavez solicited sandwich recipes from some of Denver's top chefs and put them all on the menu at once, chipping in a dollar of each sandwich sold to food-based nonprofit Project Angel Heart. So you can grab a chicken karaage sandwich by Jeff Osaka of Osaka Ramen and Sushi-Rama, a cochinita pibil torta from Dana Rodriguez of Super Mega Bien and Work & Class, a meatloaf-and-collard-green number from Tap & Burger's Cliff Blauvelt, or a chile relleno cemita from Chavez himself, among others. Hang out at American Bonded over drinks and sandwiches, or order for takeout or delivery. You'll feel good about it in more ways than one. 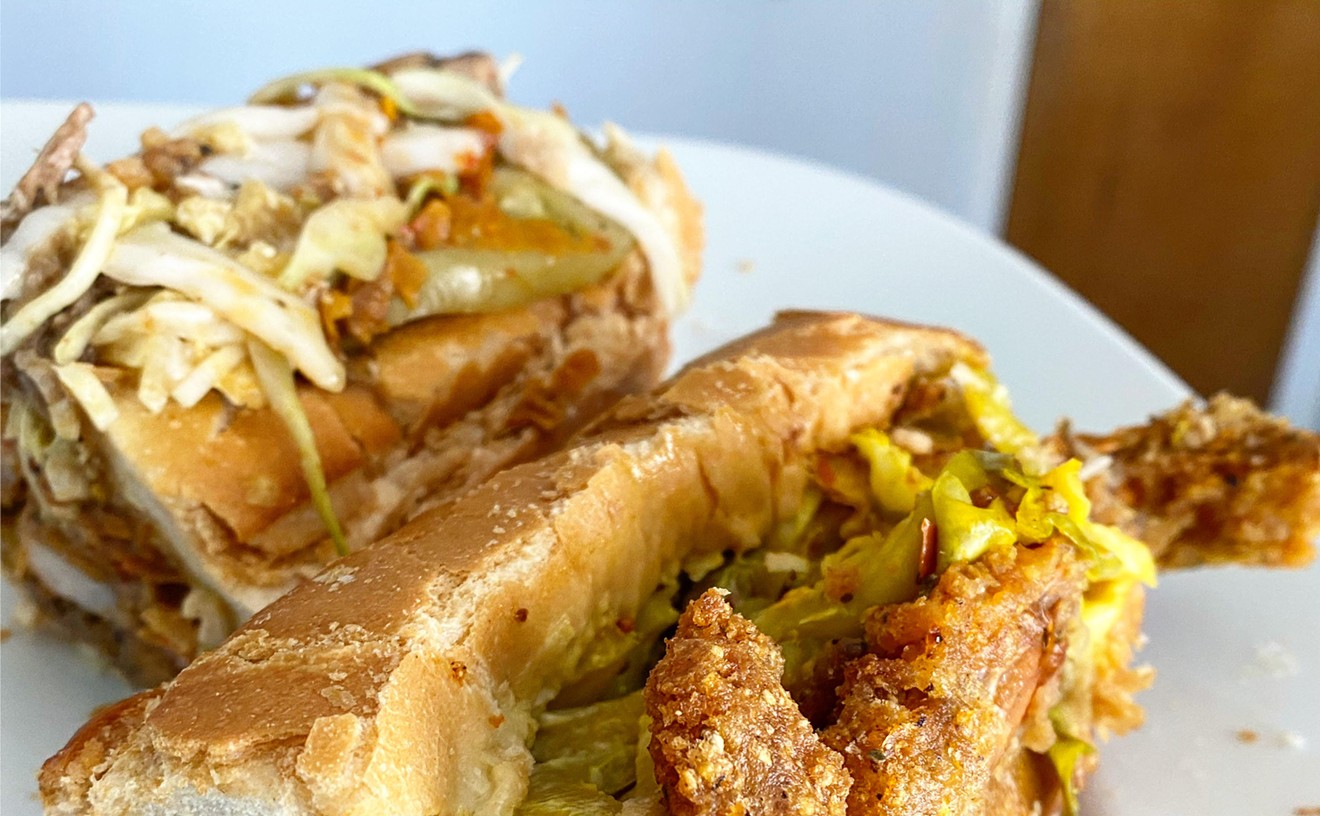 Pirate Alley is one of Denver's best-kept sandwich secrets. There's no dining room, no order counter, no sign other than a sidewalk chalkboard. Chef Kyle Foster closed his Southern eatery, Julep, late last year, but he moved the sandwich side of the business into the kitchen of Stir Cooking School, owned by his wife, Katy. The stars are a fried shrimp po'boy and a roast beef debris po'boy, both dressed and messy in classic New Orleans fashion. You can also go Surf & Turf with shrimp and beef, or keep an eye out for seasonal specials like a killer soft-shell crab sandwich. Order online and then pick up the goods at the door in the actual alley behind the cooking school. But don't keep it a secret — tell all your friends, and their friends, too! 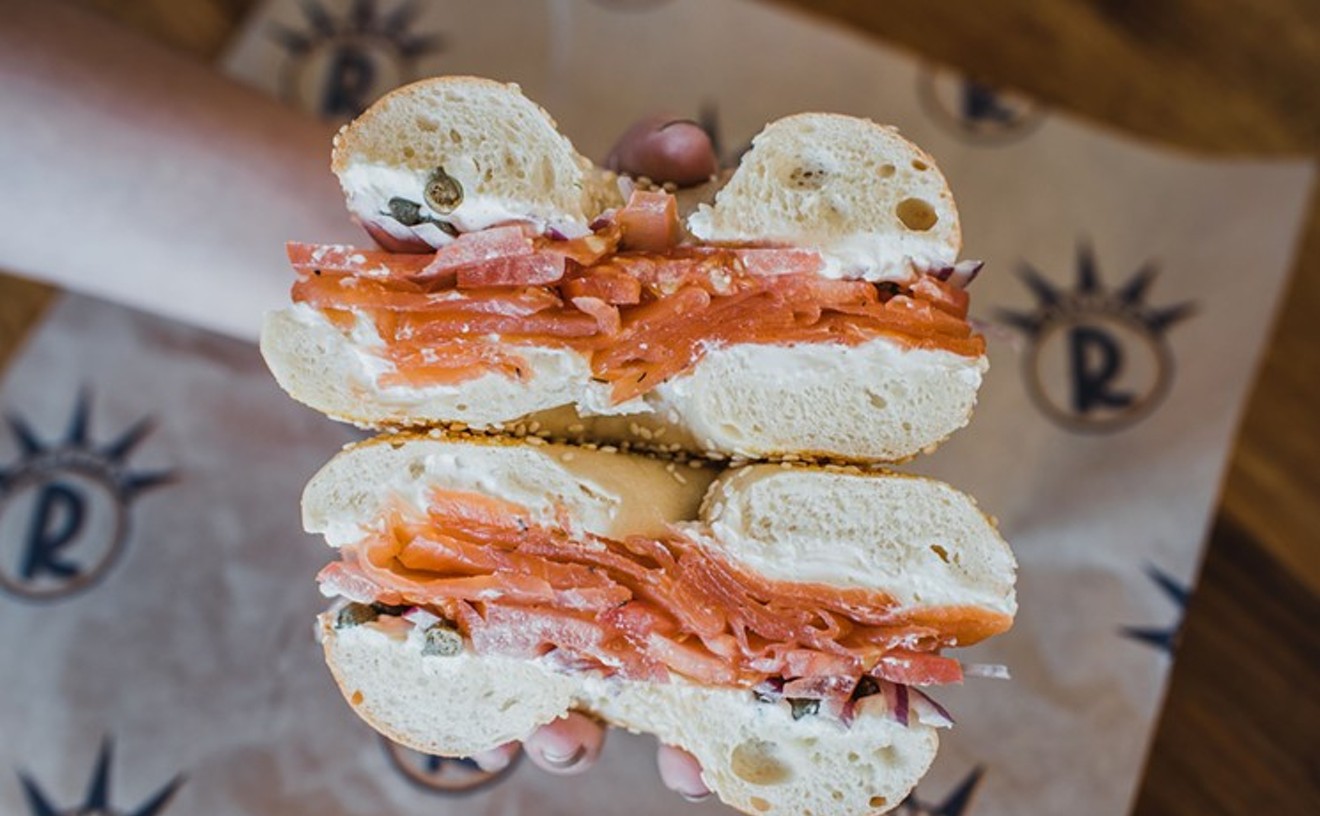 When it comes to bagels, Rosenberg's owner Joshua Pollack has everyone else in town beat. So when he builds a sandwich on those stellar bagels, they're bound to be good. Add cured meats and smoked fish all made in-house, as well as top-notch local products like ham, bacon and sausage on the breakfast sandwiches and other quality ingredients rounding out lunchtime offerings, and it's no wonder there's always a line. While Rosenberg's has been operating as a takeout-only deli at its two locations since March 2020, the bagel sandwiches are just as good, and will disappear almost as soon as they're in your hands. 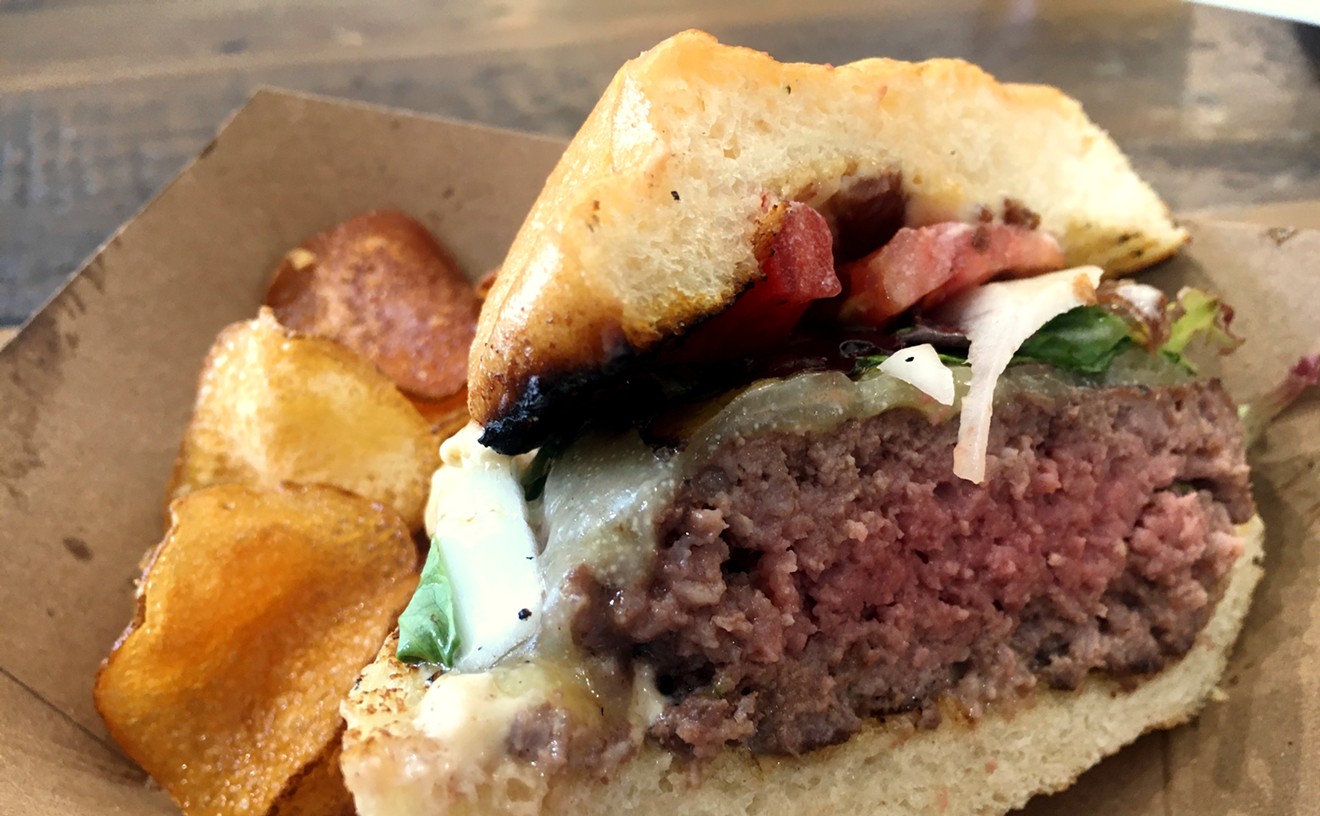 A restaurant's name is an unlikely place to find the word "scrap," given that it generally refers to the stuff chefs throw away. But Sullivan Scrap Kitchen chef/owner Terence Rogers is dedicated to using as much of everything in his kitchen as possible. The no-waste approach makes a kitchen crew think about each ingredient, utilizing everything to its full potential rather than relying on standard preparations that add up to less than the sum of their parts. As a result, the burgers, made with Colorado grass-fed beef or lamb, stand out for their pure, meaty flavor in combination with local products like River Bear bacon and housemade pickles. Even if you didn't know the casual eatery's mission, you'd still recognize a great burger from the first bite.

The Castle Bar and Grill 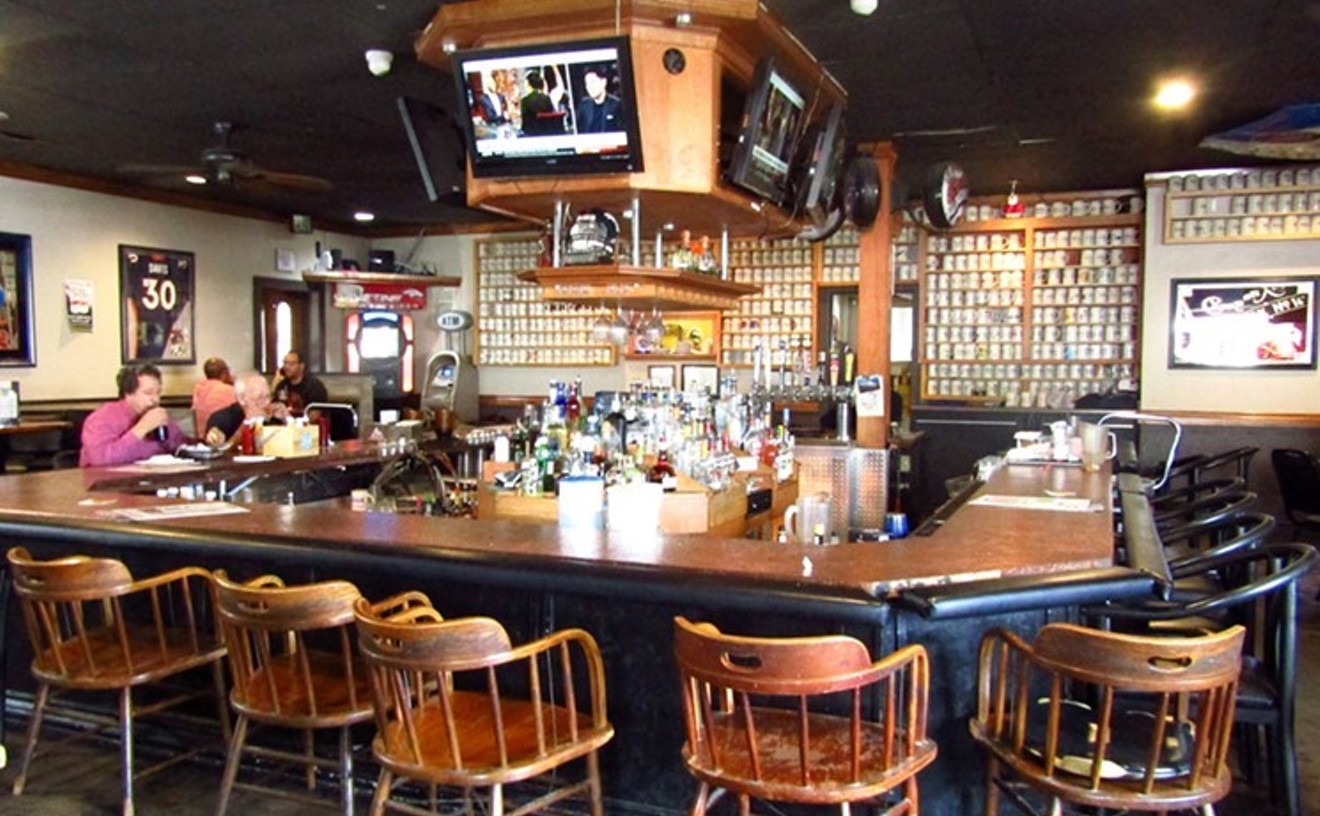 First, a great bar burger must be cooked up in a great bar — and the Castle definitely qualifies. Inside the cheesy, Castle-like exterior is a massive sunken bar, surrounded by captain's chairs where regulars can make themselves comfortable, enjoying cheap drinks while they wait for their juicy, half-pound, hand-pattied bar burgers, topped with everything from barbecue sauce to a respectable housemade green chile. Come in on Tuesday for the burger deal...but be prepared to wait. 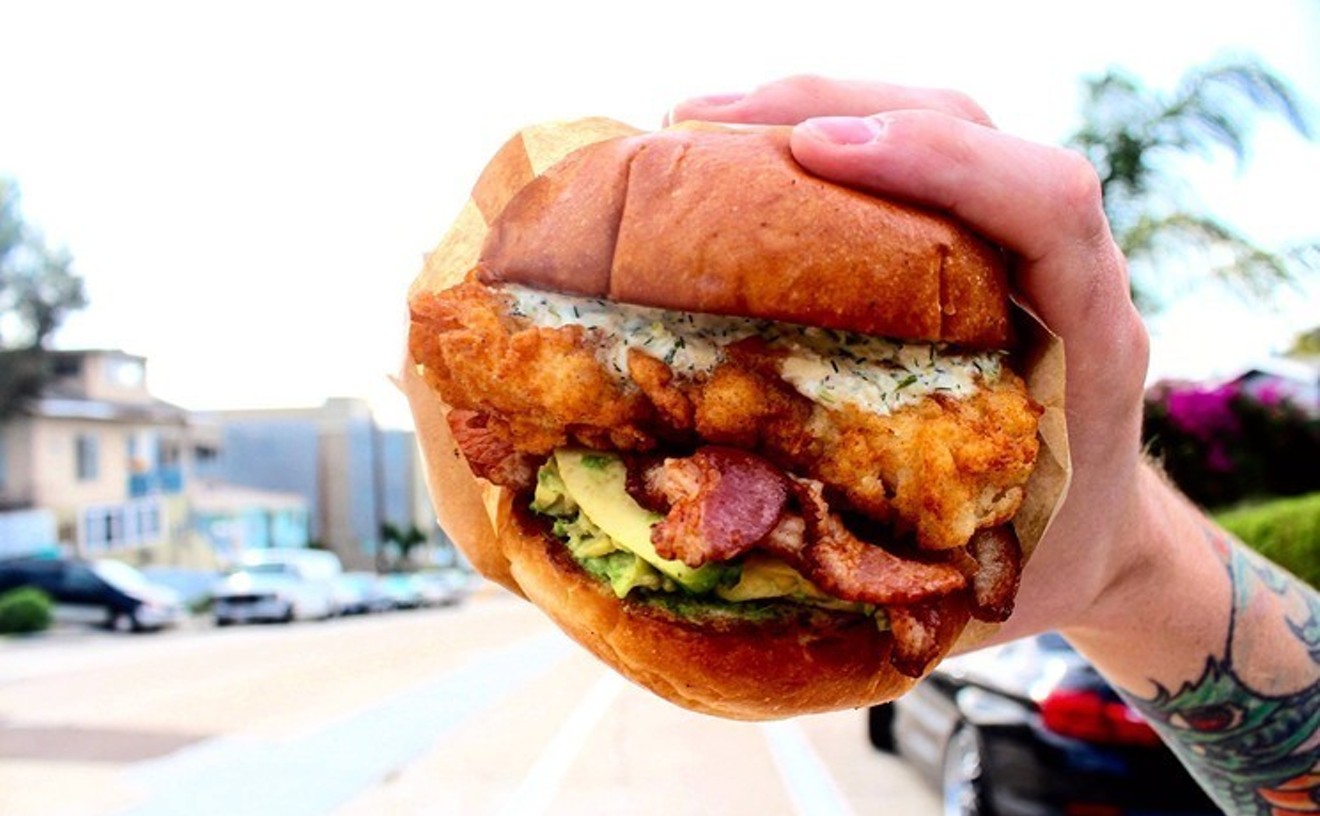 There's so much crunch to Lydie Lovett's fried chicken sandwiches at Chicken Rebel that you'll likely be wearing a little of your meal after you eat it. Under that shattering crust you'll find the juicy, flavorful chicken requisite for any sandwich worth its sauce. Get yours with buttermilk ranch, bacon and avocado, or go with the Firebird for a brisk slap of heat. There's even a breakfast version with bacon and an egg, so you'll never have to wonder which came first — because the chicken and the egg hit your mouth at the same time.