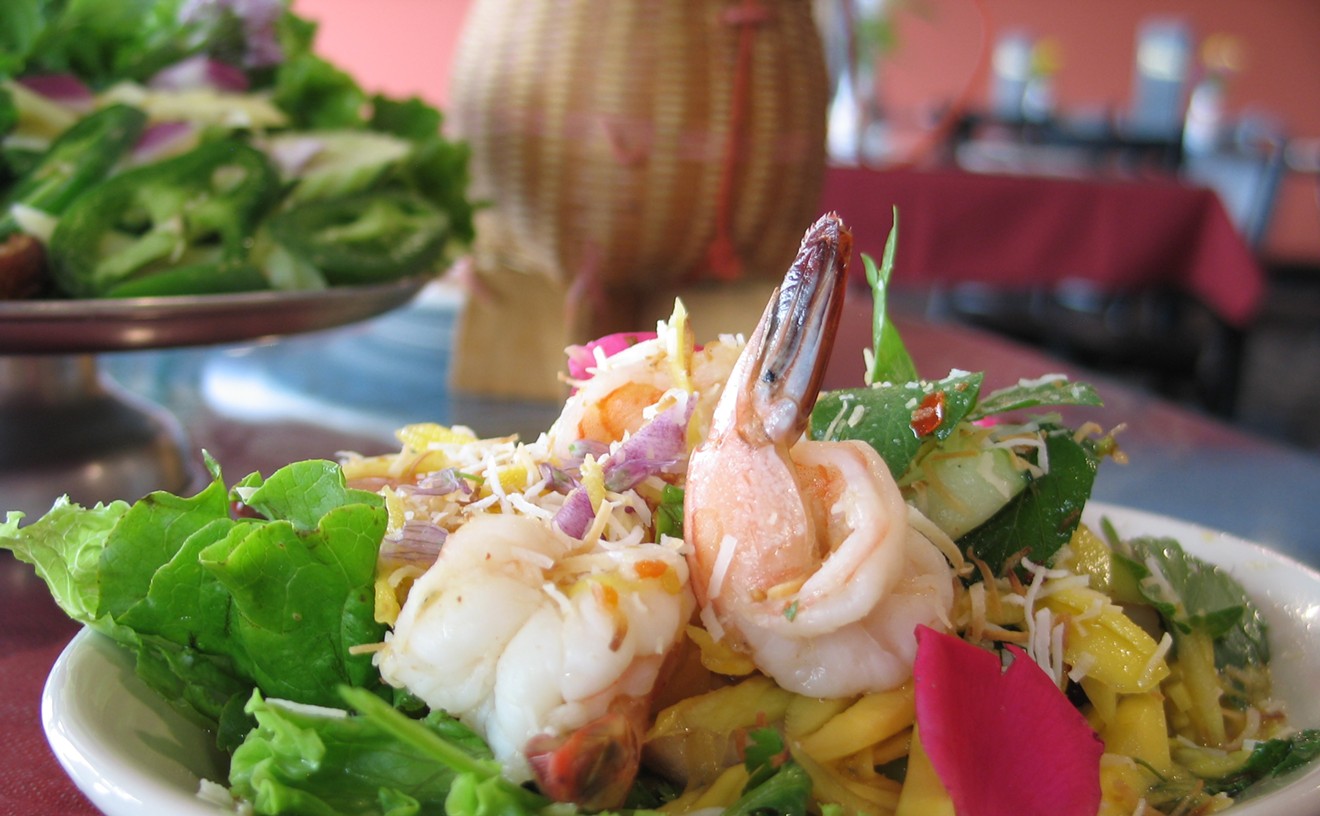 Noy and Rick Farrell care about you, and the proof is their Flu Shot Soup, a comforting Thai chicken soup fragrant with fresh herbs and packed with nutritious veggies. While the soup is only available in Colorado's chillier months, the rest of the menu at Taste of Thailand is built to warm your heart and soul, too. Seasonal ingredients, many from the Farrells' home garden, brighten many items, and the dishes of Noy's hometown in northern Thailand share space with favorites from the country's other regions. Whether you pick the rich and spicy khao soi or the lighter yum mamuang, a lively shrimp and mango dish served with sticky rice, know that you're choosing well. 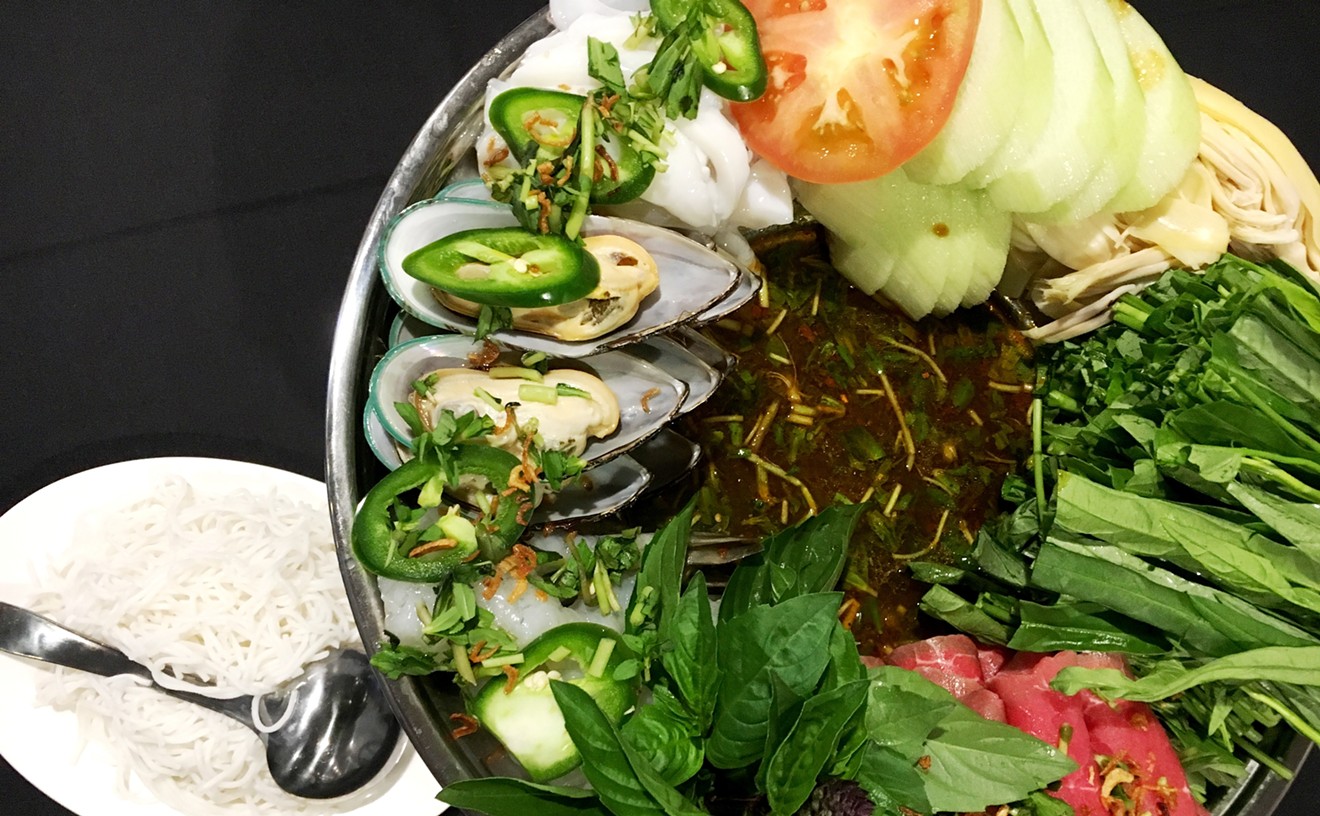 Vietnam isn't a big country, but its cuisine spans a wide range of styles and influences. Consequently, the menu at Savory Vietnam is big, offering dozens of soups, salads, noodle and rice dishes, stir-fries, hot pots and chef's specials. Start with a mounded platter of finger food and fresh herbs that you wrap in rice paper to create your own rolls, then move on to traditional noodle soups like bun bo Hue, bun rieu or hu tieu nam vang. Order family style to sample vegetarian dishes and meats done using many cooking techniques. There are even separate sections just for quail and escargot. And each dish comes from the kitchen vibrant with color, aroma and flavor — like a tour of a busy street market. 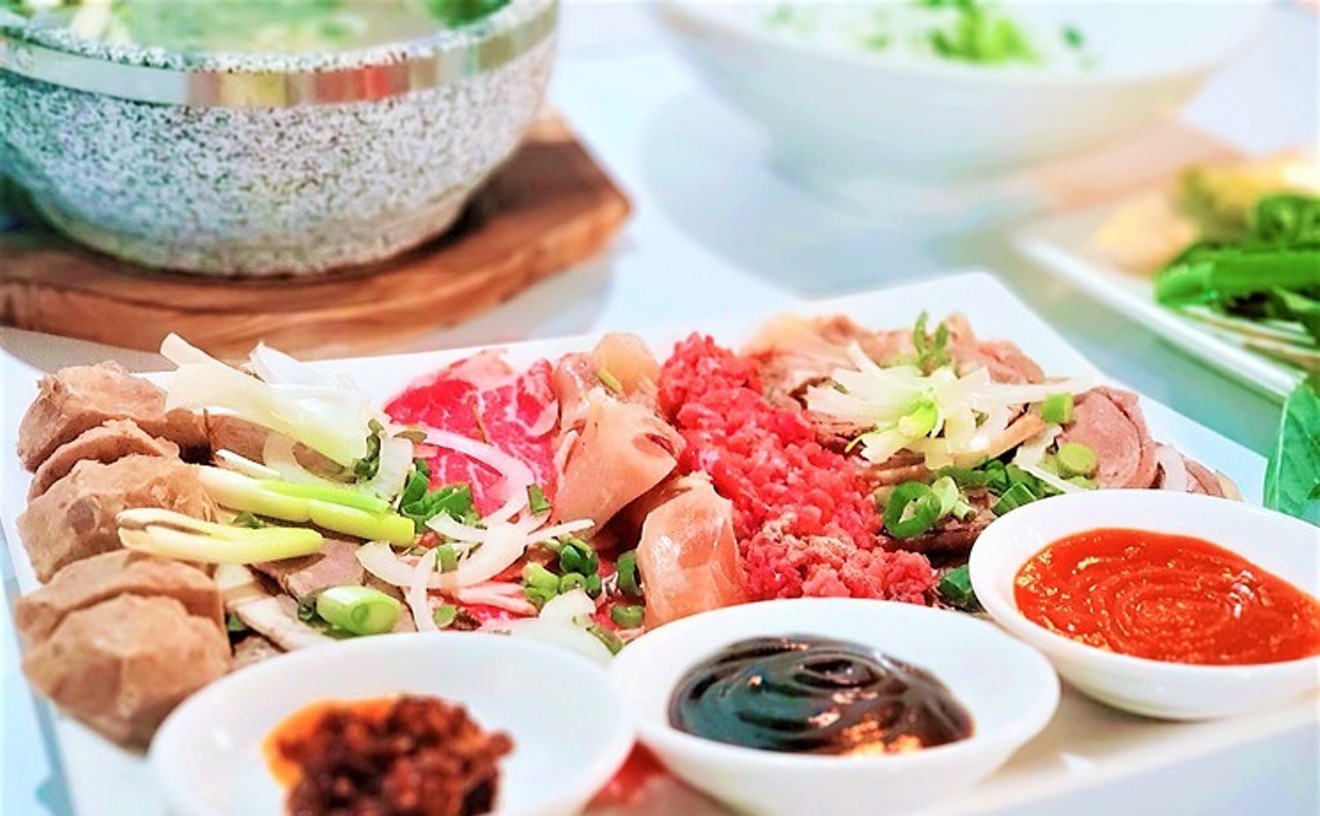 The difference between good pho and great pho can be as simple as a hint of too much star anise in the broth, a slice of brisket that's just a little too chewy or a slight lack of beefy flavor. Now Pho strikes a balance of flavors in its pho broth, which has a mild beef flavor and just a hint of sweetness, and also displays a restrained hand with the spices. The noodles are always fresh, as are the herbs and bean sprouts, and the well-prepared meats add texture to the pho. Beyond those basics, Now Pho offers oxtail, marrow bones and lobster as options. And for a richer, more complex experience, there are Pho Two Bowls, which puts the broth in an oven-hot stone bowl so that it simmers and concentrates without overcooking the noodles, which come in a separate bowl. That's the pho we want right now. 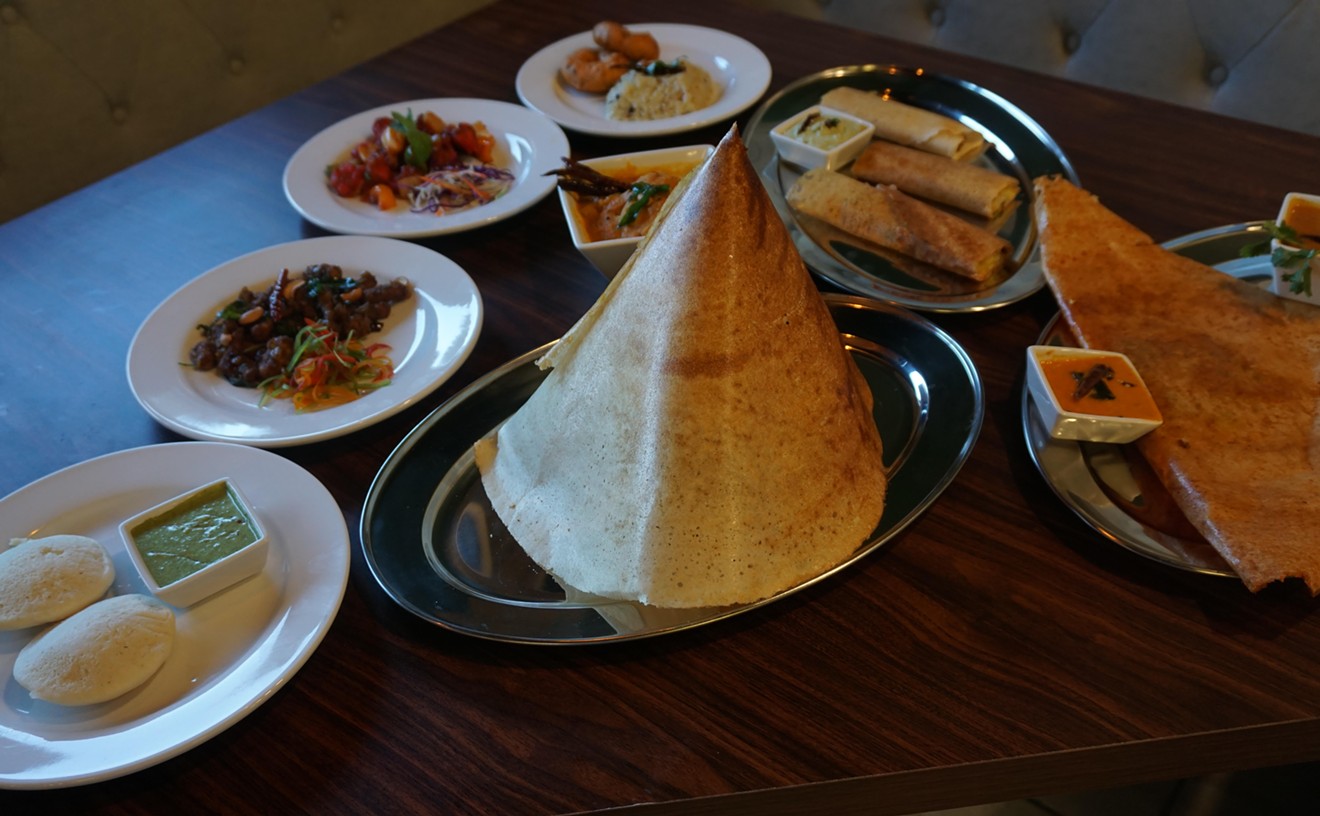 In Denver, Southern India's cuisine doesn't get as much attention as the typical vindaloo, tikka masala and array of colorful curries found in most Indian restaurants. But at the Madras Cafe, they're the star. Big dosa, rolled into tubes like oversized crepes, soft on the inside and crispy on the outside, are a good starting point, drizzled in ghee or stuffed with potato masala. Vadai, or savory doughnuts, come plain with dipping sauces or smothered in rasam or sambar, two spicy sauces. The entrees themselves are arranged in North and South Indian sections, so you can stick to one region or go on a journey across the country. As you make your way through Kerala mushroom curry, fried okra with peanuts from Andhra Pradesh, or curry made with tiny pea eggplant from Tamil Nadu, you may notice that there's not a bite of meat to be found anywhere at the Madras Cafe. But you won't miss it. 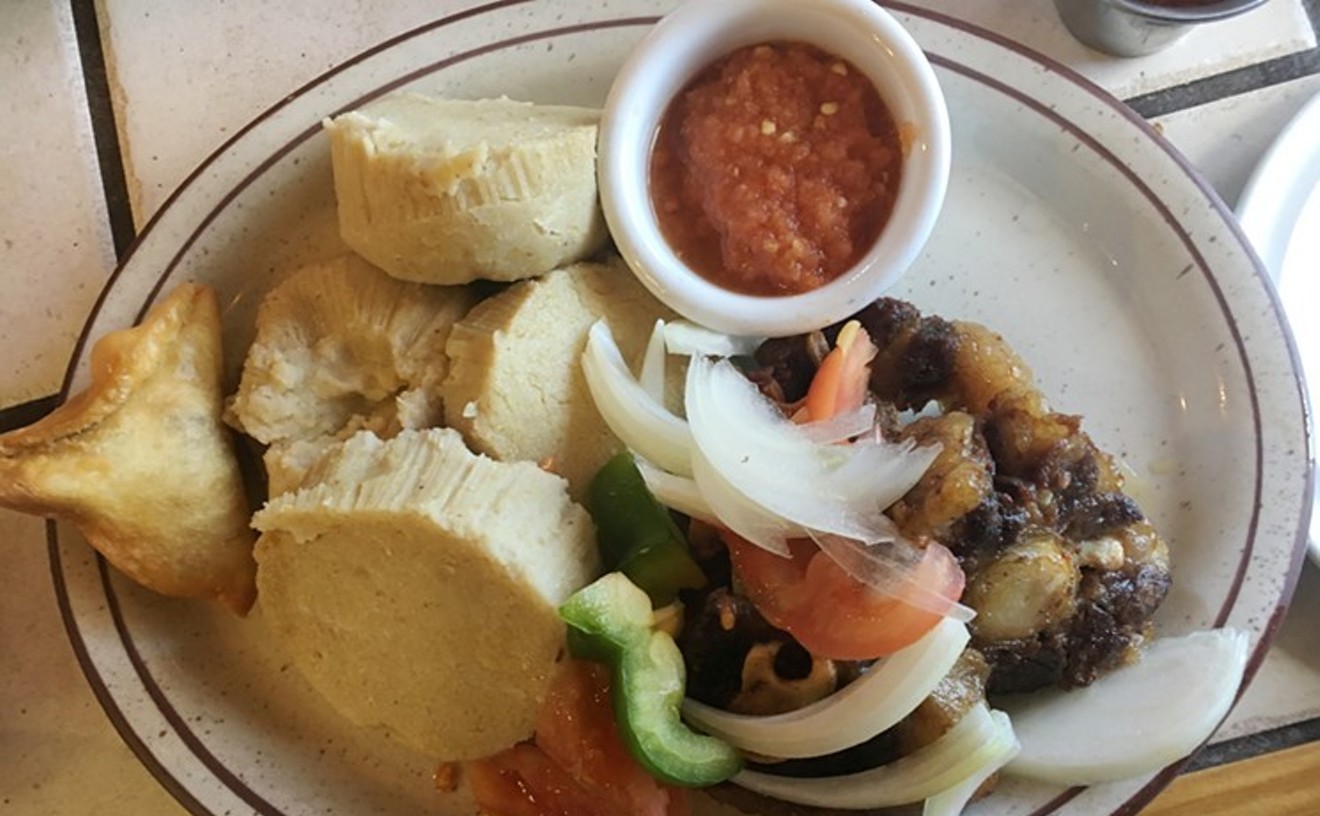 Outside of a thriving Ethiopian scene and a few good Moroccan restaurants, Denver doesn't have much in the way of African cuisine. Fortunately, African Grill & Bar owners Sylvester and Theodora Osei-Fordwuo dish up tempting food from Ghana as well as other parts of central, south and east Africa — all made without flour, sugar or dairy. You'll find jollof rice, fufu, chakalaka, goat curry and many other specialties, and if you're new to all that, the Osei-Fordwuo family (kids included) are happy to guide your choices. After one or two visits, you'll feel like family, too. 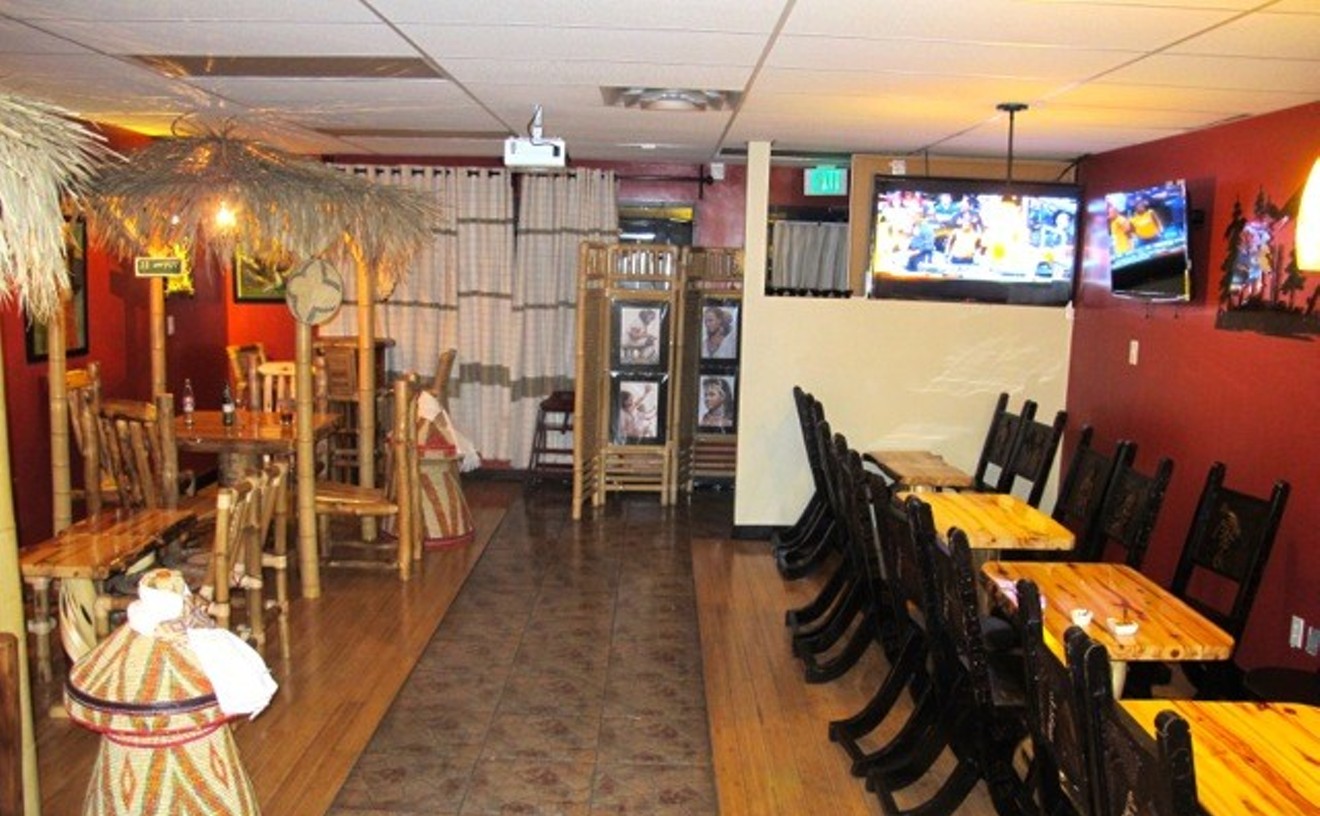 The thatched covers over the tables, the smell of coffee and spices in the air, the warm greetings whether you're in for a meal at Megenagna or stopping for groceries at the attached market — those are what keep customers coming back to this Aurora Ethiopian eatery. The beef is always at its freshest (the raw kitfo is one of the best items on the menu), and the injera fresh, spongy and earthy from the flavor of dark (almost purple) teff flour. Going meatless is easy here, too, since the stewed lentils, chickpeas and greens and other vegetable dishes are every bit as spice-laden as the meat. Sharing is almost an obligation, so don't go alone. 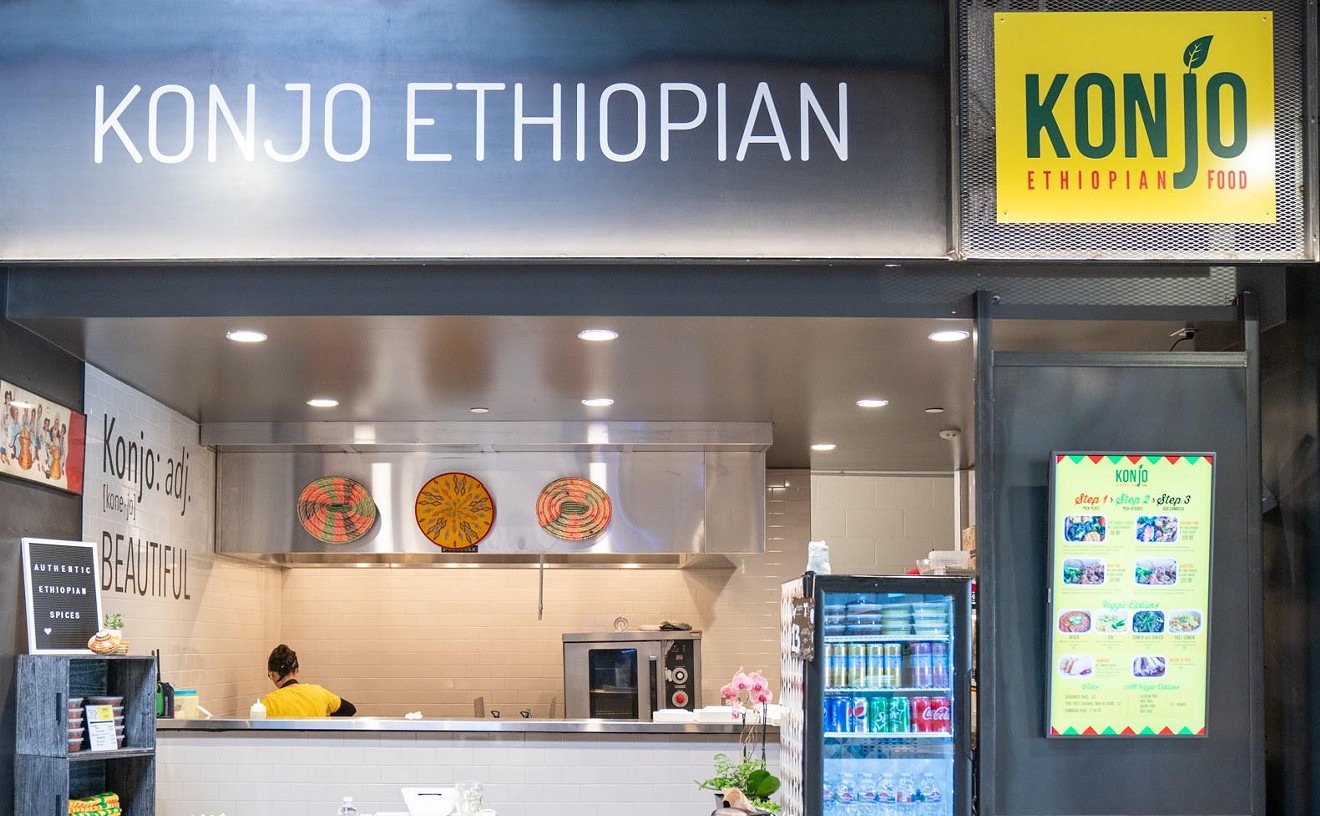 Konjo is part of the food hall lineup at Edgewater Public Market, offering Ethiopian cuisine alongside more typical pizzas, chicken sandwiches, crepes and ice cream. Despite the setting, Konjo's flavors are every bit as rich and complex as you find at the sit-down Ethiopian restaurants on East Colfax Avenue and along Havana Street, but dishes are served in a way that's easier to enjoy without committing to an hours-long meal. Choose from a veggie combo or chicken, beef or lamb tibs; each meal comes with rolls of injera flatbread. 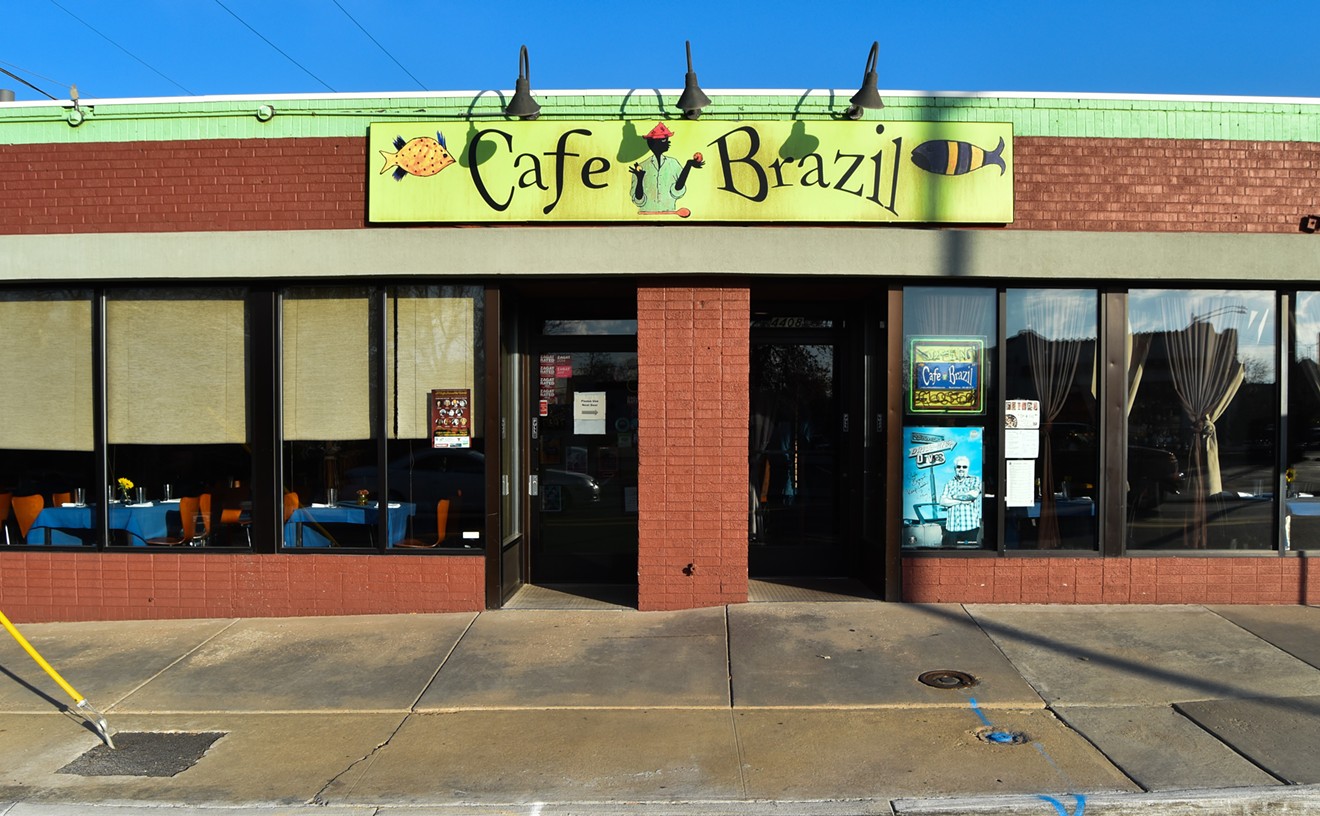 Folks with a long memory and an adventurous streak for seeking out great food in Denver's hidden neighborhoods will remember when Cafe Brazil served South American cuisine from a ten-table eatery on Navajo Street in the 1990s before moving to its more spacious home in the early 2000s. The Zarlenga family's bold, fresh and flavorful interpretation of Brazilian cooking, tinged with influences from Colombia, Spain and even a little Italy, has been a bright spot in northwest Denver for more than twenty years. A visit is never complete without a sip or two of rum or cachaça from the bar's extensive collection. 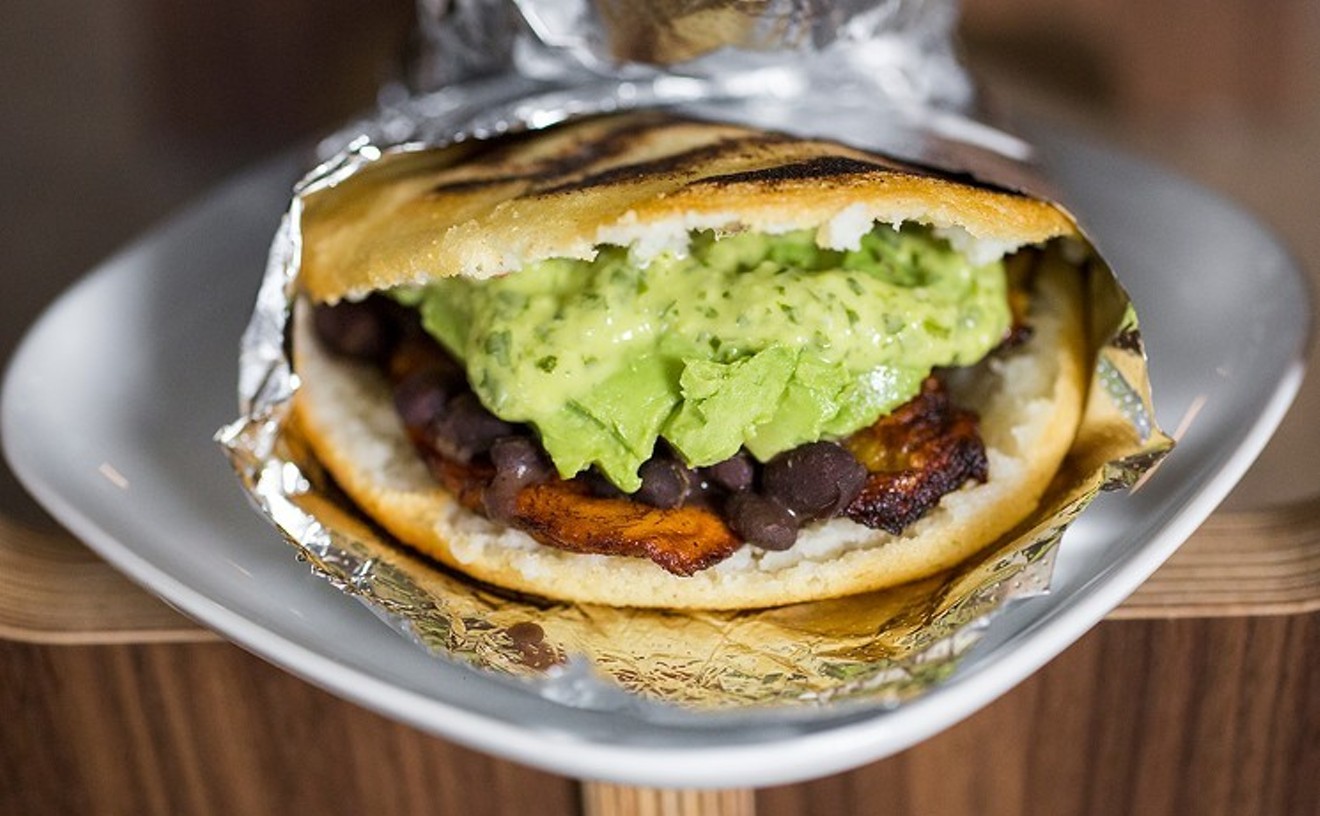 The arepa is the quintessential Venezuelan street food, a fluffy, corn-flour pocket stuffed with all manner of meats, beans, veggies and sauces. Quiero Arepas makes its arepas big, then wraps them in paper for a filling meal on the go. Lighter appetites should start with La Original, with avocado, plantains and black beans. But our favorite is the Pabellon, a classic in Venezuela made with juicy shredded beef, black beans, plantains and cheese. Other combos come with salmon, ham and cheese, chicken salad and Cuban-style fillings, to name just a few. Quiero Arepas can also be found at Avanti Food & Beverage in Boulder and LoHi. 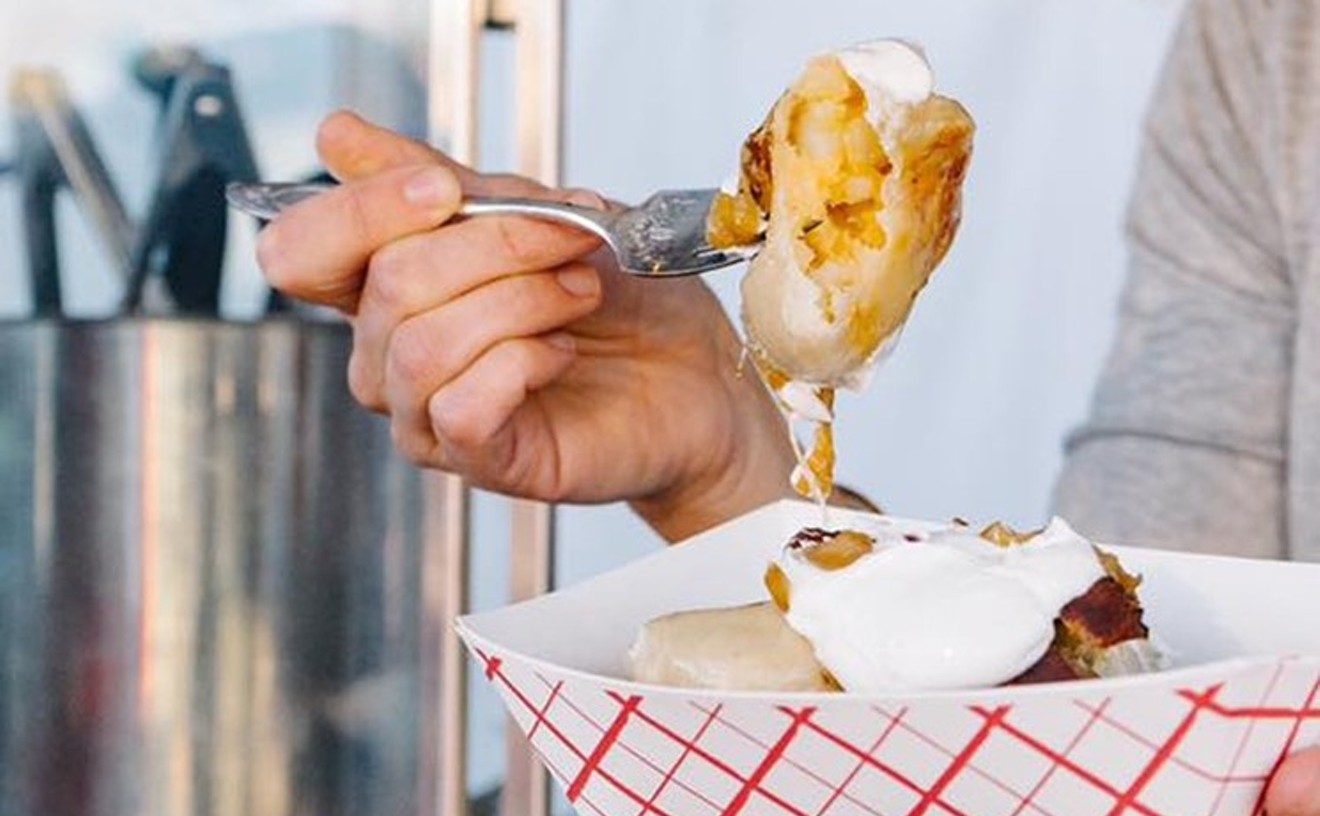 Courtesy of Baba and Pop's

The homey pierogi got a modern makeover when Jeremy and Katherine Yurek opened their Polish eatery on a revitalized strip of East Colfax Avenue last year. The pierogi and other eats at Baba & Pop's are as comforting and satisfying as Grandma's best, but the ambience of the restaurant is a little hipper. Along with time-honored potato or sauerkraut versions, you'll find pierogi reimagined with chili relleno or pizza-style fillings, and there's even a pierogi poutine with housemade brown gravy. Cabbage rolls, kielbasa and sauerkraut soup further reinforce the Polish offering. At weekend brunch, things are a little less by-the-book, especially if you throw down $48 for the Buddy Mary, a 50-ounce Bloody Mary bristling with skewered fried chicken, sausage, bacon, cheese curds, pickled veggies and charred jalapeños. Baba and Pop would be shocked!