Best Dispensary for a Connoisseur 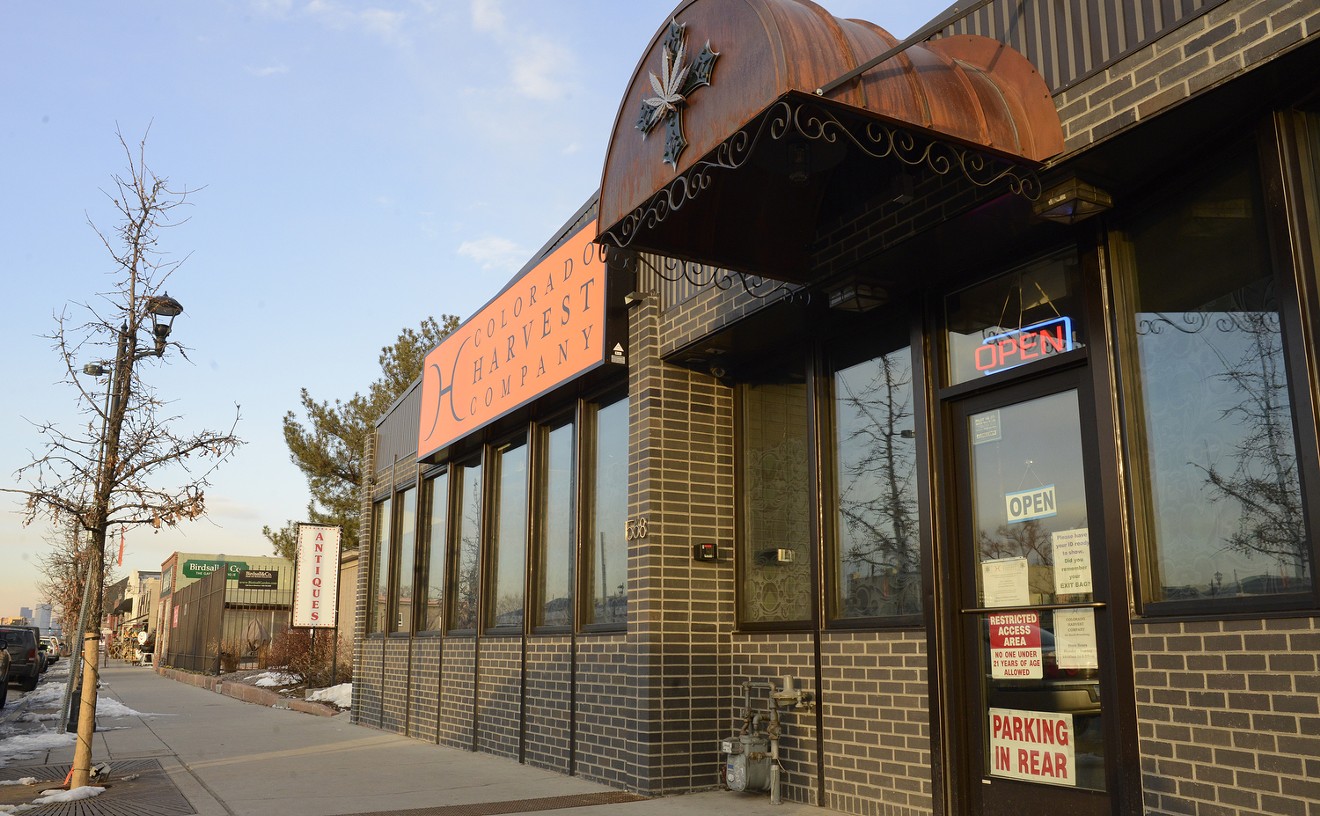 Colorado Harvest Company founder Tim Cullen, a former teacher, nearly sold his dispensaries a couple of years ago, but ultimately decided to keep running the show. We're glad he did, because he's solved the equation of good weed at low prices. Open since 2009, Colorado Harvest Company boasts some of the best dispensary menus in the country, selling everything from $100 ounces to some of the state's most popular flower brands, including Cherry, Green Dot Labs, Locol Love and Snaxland. The internal grow is no slouch, either, regularly pumping out new strains to scratch that exclusivity itch so many cannabis collectors get. The concentrate lineup is just as stacked as the nursery, with extractions from 710 Labs, Green Dot, Olio and Soiku Bano priced as affordable payday treats. Show up with a modest budget at any of the chain's three stores in Aurora or Denver, and you can still leave with one bountiful bag.

Best Dispensary for a Tourist

Given how expensive concert tickets are, tourists deserve a good representation of Colorado cannabis when they visit. Solace Meds, a chain of dispensaries founded by former Denver Bronco Rod Bernstine, has all the fixings of a well-stocked store that an experienced shopper seeks, and you don't have to drive to Mordor to get there. Locations on South Broadway and East Colfax Avenue are short trips for anyone who wants to stay in the action while visiting Denver, and the Solace Meds store in Wheat Ridge, right off Interstate 70, is a quick pit stop during a trip to the mountains (as is the Solace Meds store in Fort Collins for all you brewery day trippers). The flower and concentrate lineups, full of names like 14er, Cookies, LoCol Love and Veritas, are trustworthy representations of Colorado cannabis. And unlike most stores with quality smokeables, Solace Meds has a vast treasure chest of edibles and vaporizer cartridges, so getting a sweet deal on an in-house chocolate bar or pre-rolled joints is a very attainable goal. Stock up, and leave the leftovers for us. 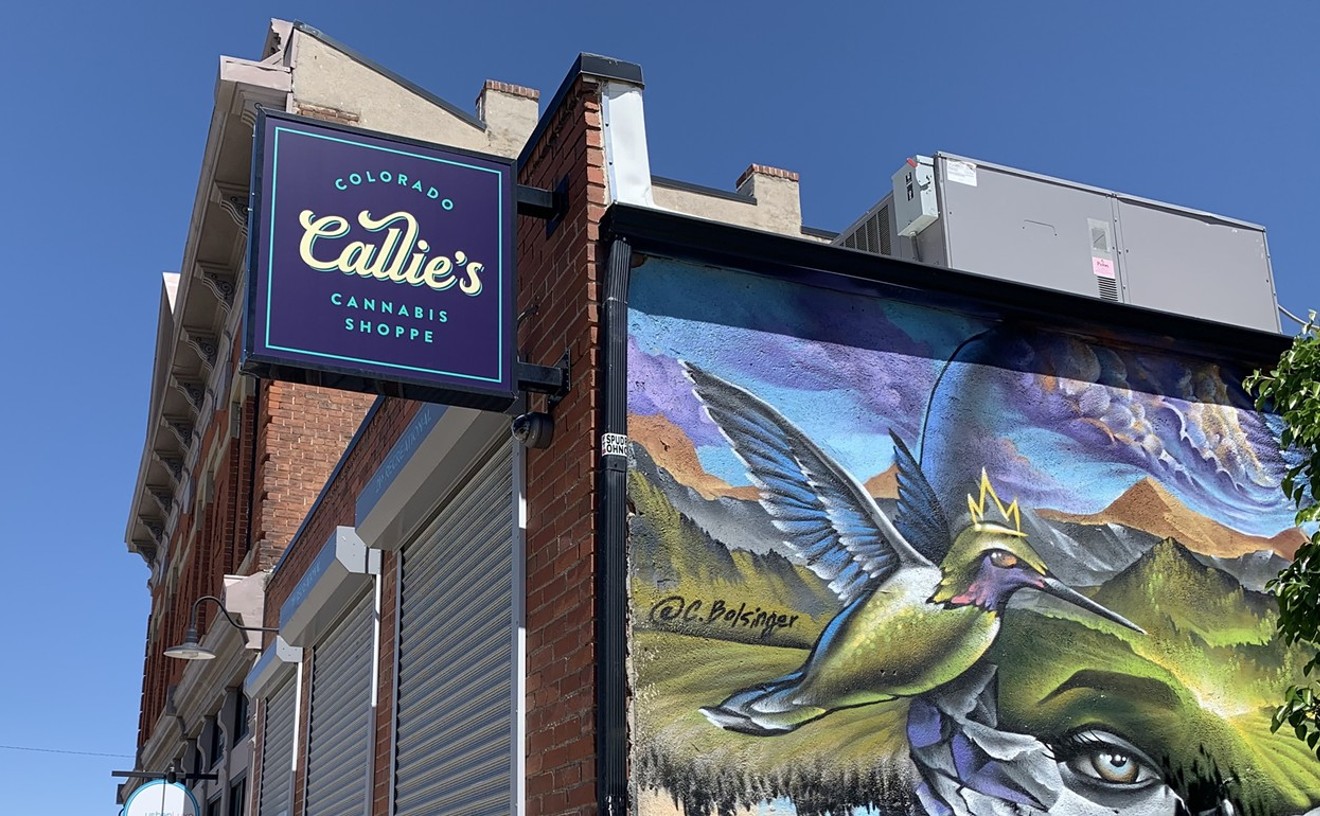 For all of RiNo's fine drinking options, good weed has been sorely lacking in the area. Thankfully, Callie's Cannabis Shoppe of Northglenn took over the Botanico location at 30th and Larimer streets last year (along with another former Botanico dispensary in west Denver). The family-owned operations sell stanky buds from Colorado's top gardens — Bloom County, Cuban Crew, Leiffa and Lemon Tree — as well as Callie's own grow. Parking is easy to find despite this store being a stone's throw from Larimer's popular watering holes, and those looking for a convenient purchase can usually find a good deal on gummies or a caviar joint, then quickly resume their day of defying death on electric scooters. 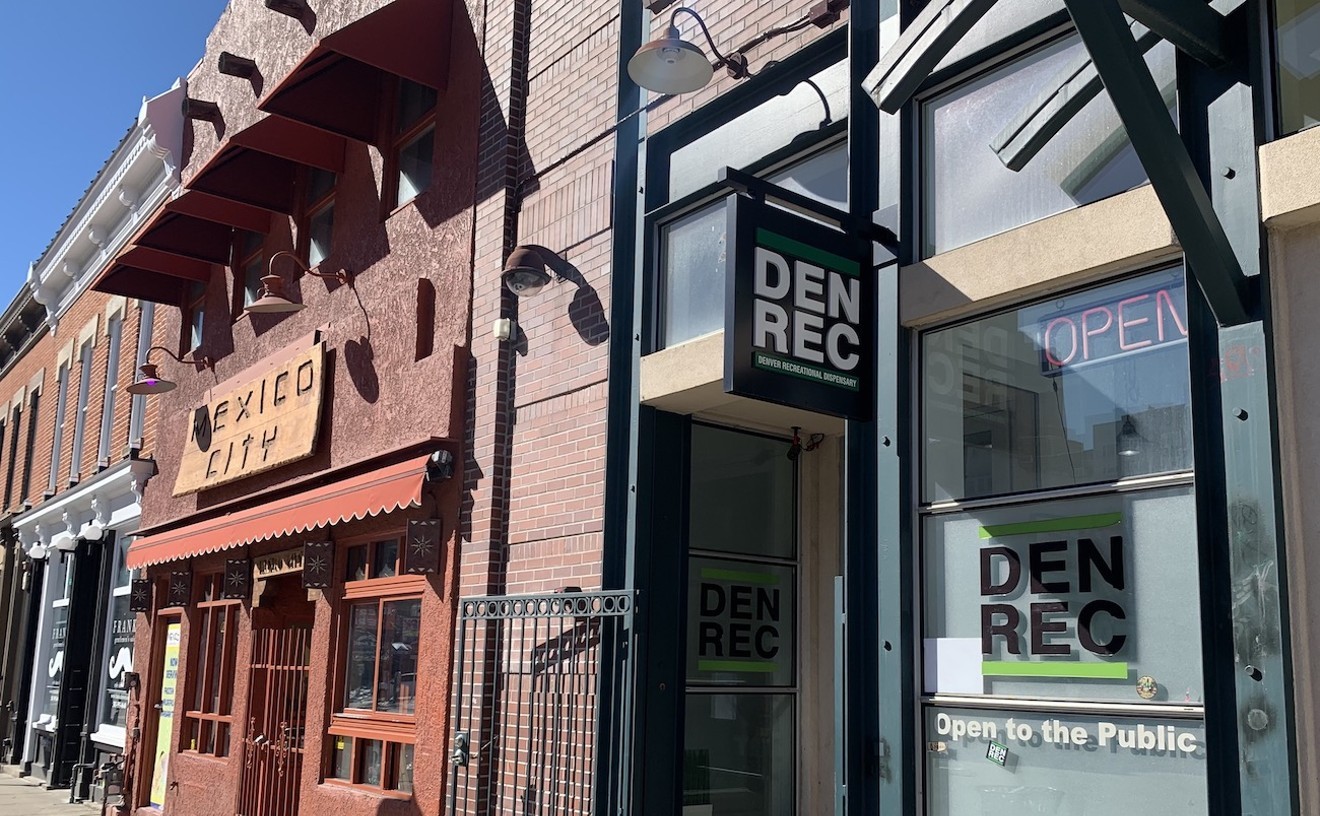 Throw a rock across any street downtown, and you have a good chance of hitting a dispensary. Despite the options, however, most cannabis users tend to avoid downtown dispensaries, fearing high prices and low parking availability. Unless there's a Rockies game, though, Den-Rec is a safe bet for an easy outing, and you won't have to worry about missing out on the primo. The store's cultivation likes to give customers options, with classics like Blue Dream, popular in-house strains like Four Kings, and even phenotypes of the same strain, so customers can choose which version of Holy Grail Kush they like best. There are more than enough edibles to satisfy an appetite, and Den-Rec's selection of premium concentrates is right up there with those of South Broadway dispensaries. While you can aways visit Den-Rec's other stores in south Denver or Lyons, you're not losing anything by shopping in the heart of the city with this one.

You can't remember to pack everything for every trip to the mountains, but no big deal: There are dispensaries in resort towns. It'll cost you, though, and they might not carry products you're familiar with. Before it's too late as you drive west on I-70 for the weekend, keep an eye out for Exit 243 Dispensary in Idaho Springs. This store, located right off the interstate and named after the nearby highway exit, has changed hands a few times over the years, but current ownership has created a good-enough menu to back up the visible location. Affordable and connoisseur buds are both at the ready, as are a deep edibles lineup and enough pre-rolls and vape cartridges to get every ski lift in Summit County high.

"Maiko" is the Japanese term for an apprentice geisha in Japan who performs during feasts and makes visitors feel welcome. You won't see the budtenders at Maikoh Holistics dancing a jig of any sort, but they will make you feel at home. The cannabis quality and prices are strong enough to prevent any harshing of your buzz, and the staffers add some good vibes, leaving you excited to try out your purchase but sort of sad to leave, too. It doesn't matter if you're indecisive, full of stupid questions or change your mind at the last second. You've got a friend in Maikoh. 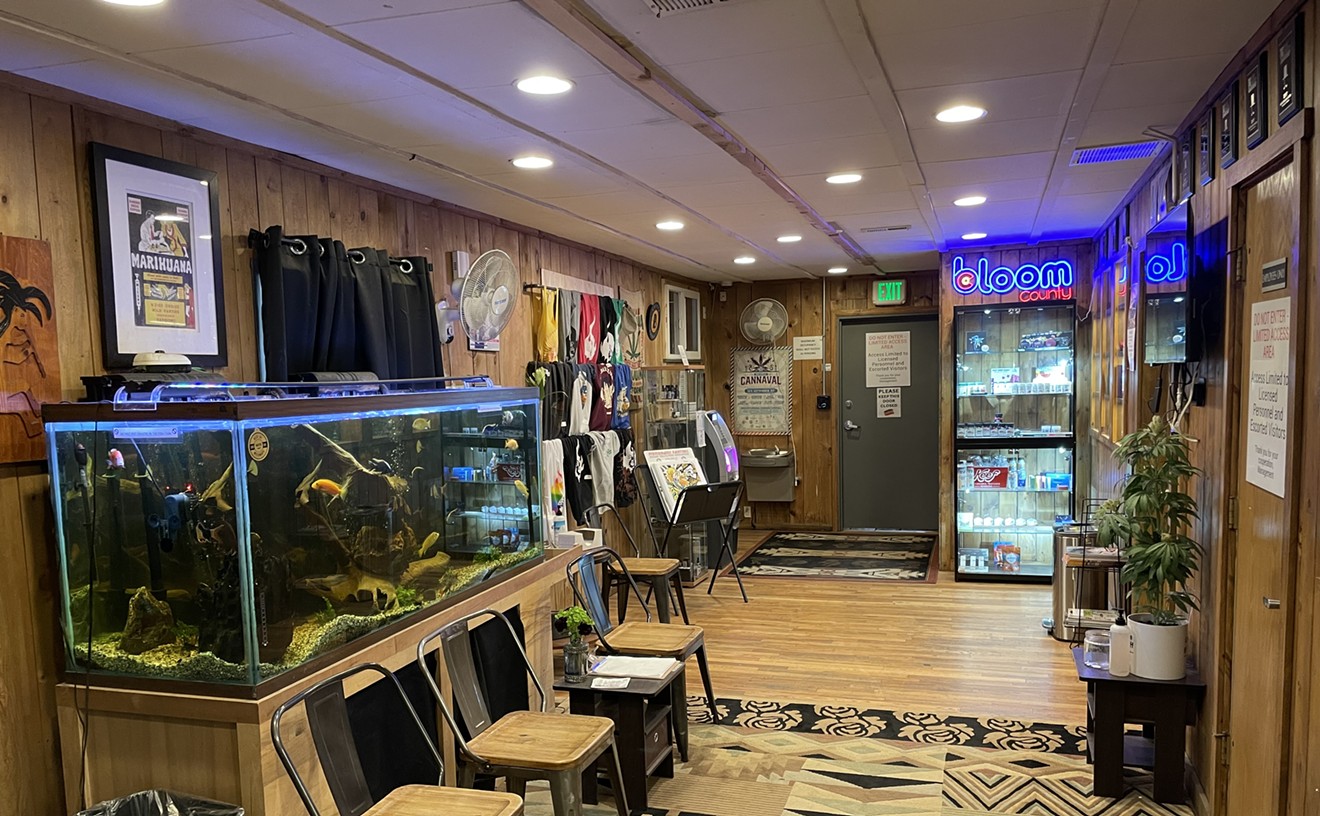 Dispensary waiting rooms wouldn't exist at all if it were up to us. State laws mandate some sort of waiting area as budtenders serve one customer at a time, though, so props to the Herbal Cure for making the time fun and comfortable. The dispensary's saltwater fish tank is large and lively enough to keep you occupied for a few minutes, and if that's not enough, there's a stack of coffee-table books about everything from dogs to street art that will pique interests. With any luck, the wait won't be that long for some of south Denver's best cannabis, but if you do get stuck there on a Sunday, you shouldn't have any problem getting cozy.

Best Selection at a Dispensary

It's best to check out A Cut Above's menu online or make a to-do list before going into the dispensary, where you'll find more flower than at a Home Depot nursery. In fact, this place has more options than an Instagram model, and each one looks just as good or better than the next. Denver's premier growers like to release their newest strains and harvests at A Cut Above, and eighths and quarters are always priced ahead of the curve. Few dispensaries in Colorado can match A Cut Above's mix of exclusivity and affordability, and that's why it stands out among dozens of dispensaries — despite being nestled in the inner corner of a parking lot on South Broadway's Green Mile. Just have your cash on hand, because chances are you'll leave with more than you intended. 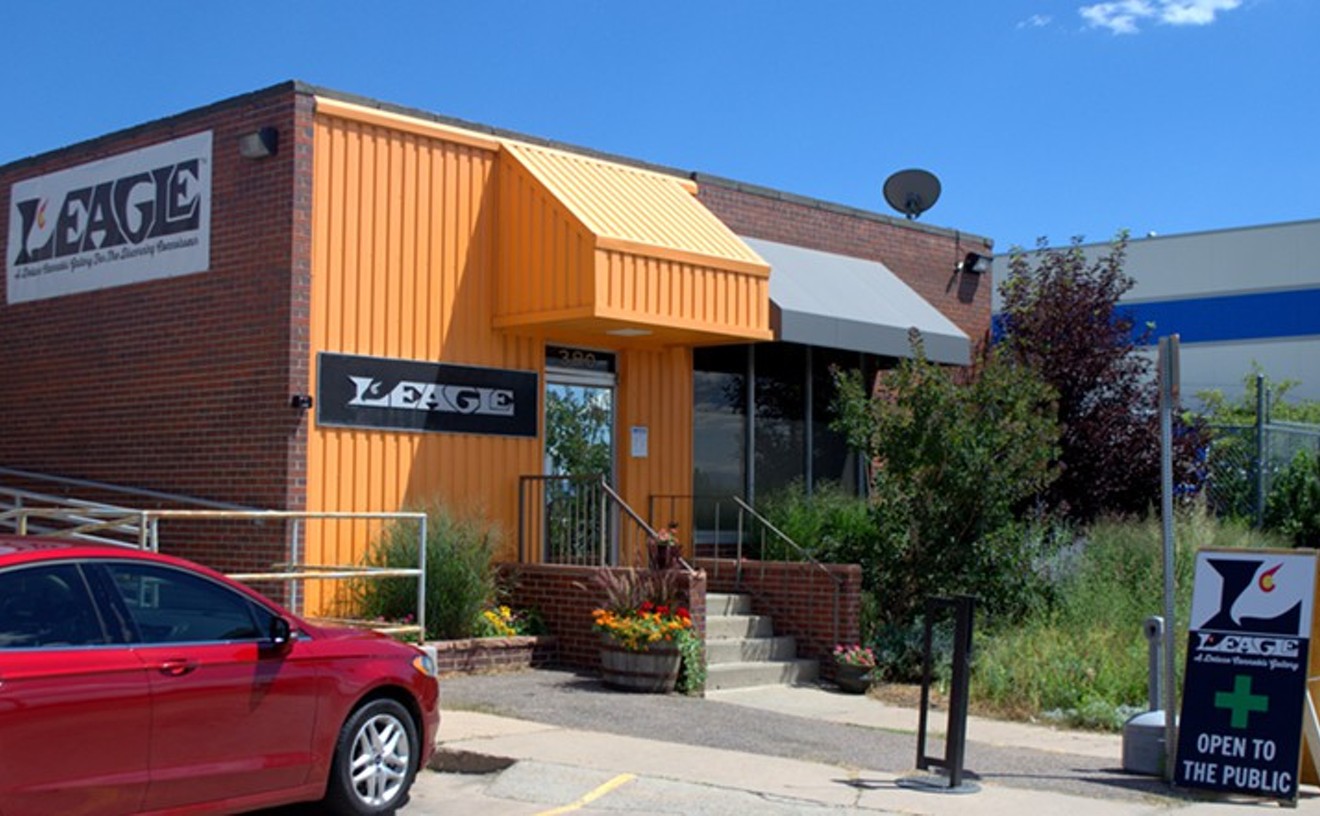 There's no dip in quality here just because the names aren't new every week. Classics stay classic, and L'Eagle keeps growing them really, really well. Operated by John and Amy Andrle, the Denver dispensary isn't afraid to put an Apple Fritter, Ice Cream Cake or one of their own new creations on the shelf, but they also know how to play the hits. Blue Dream, Grape Ape, Green Crack, Strawberry Cough and John's favorite, Sour Diesel, are all fixtures at L'Eagle, and they're some of the best takes on the strains you'll find. Seeing one of those names on a dispensary menu is rare nowadays; five is a miracle. And that's just a portion of the throwbacks you'll find at L'Eagle, where Bruce Banner, Grand Daddy Purple and Pakistani Chitral Kush also make regular appearances. 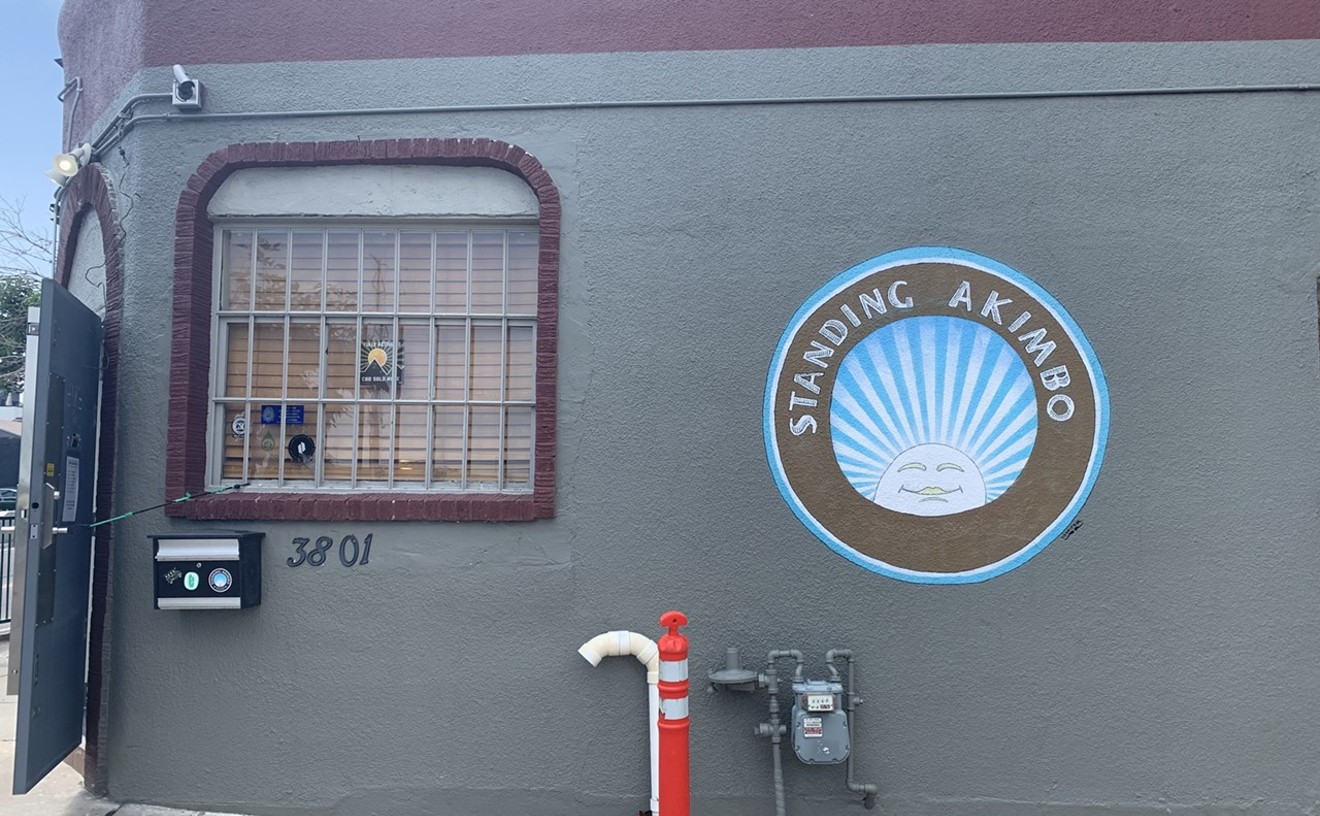 Recreational marijuana buyers would likely be jealous if they saw the prices that medical patients get at Standing Akimbo, but we're not sure the north Denver medical marijuana dispensary could handle any more customers. The parking situation leaves a lot to be desired and the line tends to meet the sidewalk, but since Standing Akimbo has virtually unbeatable prices on popular edibles, flower and concentrate, deal-hungry patients argue that the wait is well worth it. Considering medical marijuana isn't covered by health insurance, those cost cuts can make all the difference.