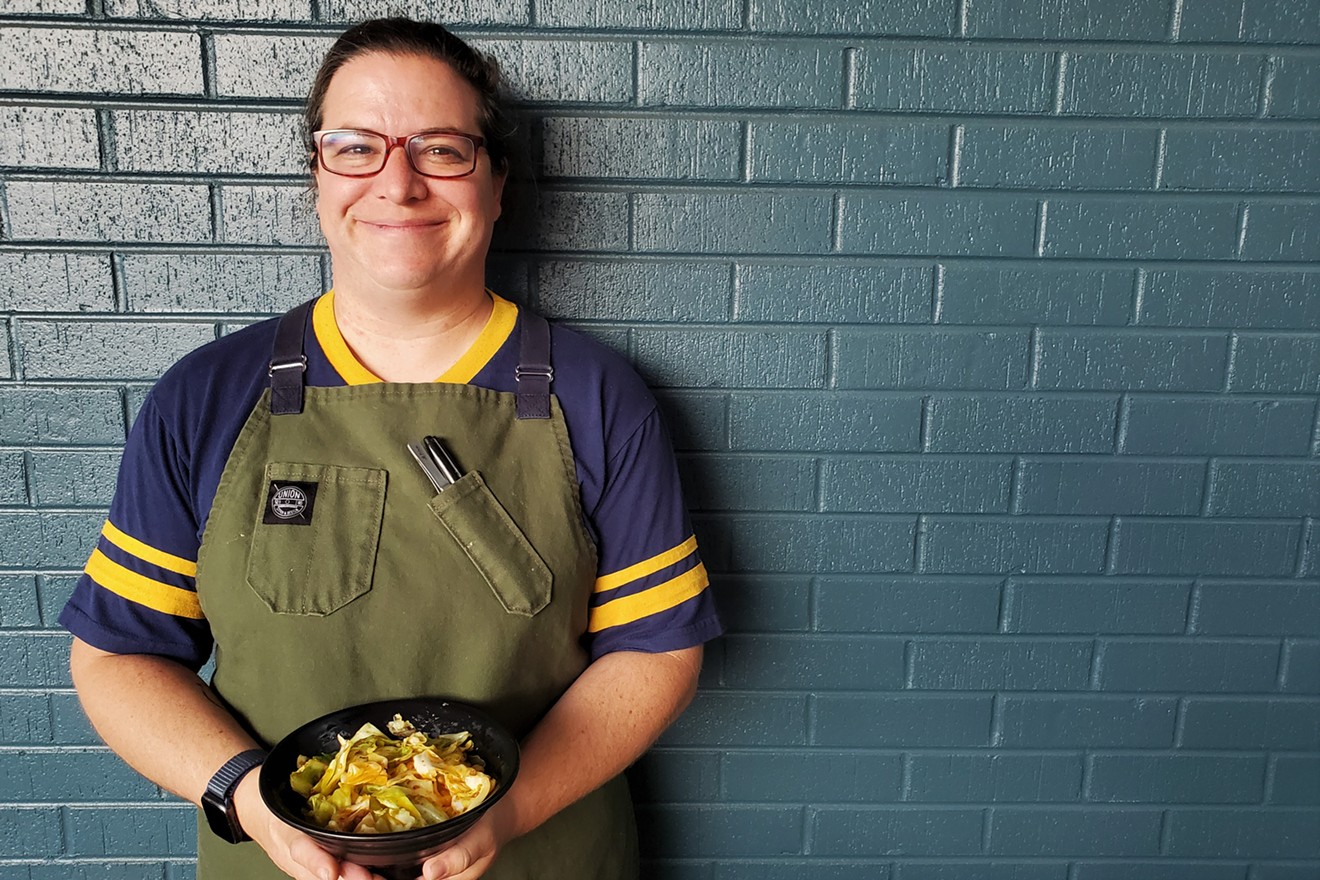 Taking risks led Natascha Hess to a happier place in life. Molly Martin
As restaurants reopen at full capacity and scramble for employees, we're sharing the stories of people who got their first jobs at eateries around the area. Have a tale you'd like to share? Email [email protected].

Natascha Hess, owner of The Ginger Pig at 4262 Lowell Boulevard, took an unusual route to the culinary world. The University of Wisconsin hockey player moved to Denver after graduating in 2001 to help launch the Fox Sports Rocky Mountain television station as a production assistant.

After two years, she decided to go to law school at the University of Denver, eventually passing the bar exam after five attempts. (She's not the type to give up easily, a trait that is essential in the restaurant business.) Hess worked for an attorney in Bailey until the 2009 recession hit. Without enough cases for two lawyers at the firm, she struck out on her own, starting the Law Office of Natascha Sherman Hess, where she did mostly bankruptcy, divorce and criminal law, a career path that she calls "depressing."

Prompted by the news that two close friends had been diagnosed with serious medical conditions, she says she realized: "You don't know how much time you've got, and if I'm gonna die soon, I want to go out doing something I love."

Hess returned to sports television in 2014 as a social media producer for Root Sports (now AT&T SportsNet Rocky Mountain), selecting sponsored tweets to be featured during Rockies games. But while she loved sports and her job, which required her to watch a hundred Rockies games a year, another dream had started to take shape: opening a food truck where she could share the cuisine she'd come to know and love during earlier years spent traveling and living in China and other Asian countries.

To her sports TV co-workers, the idea seemed out of left field. But someone else, a stranger she met during a 2015 dinner in Denver with her husband, gave her an unexpected first foray into a professional kitchen.

Here's Hess's story of her first restaurant job, which began just eight months before she launched her food truck, as told to Molly Martin: About the place: At the time, Brazen was one of the few places that had late night. I don't know that many places that do that anymore; it's kind of a trend that's going away. But I ended up there for dinner because my husband worked really late nights at the time, so we were looking for a place that was open at like 10:30 p.m. It was a really interesting place to me because they had Thai curry mussels and ramen, but they also had handmade pasta and three different types of handmade sausage and just really interesting, diverse food.

How I got the job:
I was having a late-night dinner with my husband at the chef's counter at Brazen, eating an unbelievable bowl of ramen. The chef started talking to me casually, and I told her about my plans for a food truck. She suggested that I stage somewhere, and when I told her no one would take me because I had never worked in any restaurant and had no professional cooking experience, she said, "I'll take you."

I explained that I had applied to culinary school but wasn't sure I wanted to take out more loans after having gone to law school and already having debt from that. But the chef insisted she could teach me everything I would have learned at culinary school and offered to put me through an on-the-job boot camp. The chef was Carrie Baird, who would later go on to lead the kitchen at Bar Dough and appear on Top Chef. She even worked on the truck with me for four months to help streamline things when I started Ginger Pig in July 2016. She's now my consulting partner at the brick-and-mortar location. Also from the Ginger Pig happy hour menu: the Korean cornflake dog.
Molly Martin
What I did: My first night there, I was shucking oysters and the dishwasher didn't show up, so I was the dishwasher. Then they actually hired me as the dishwasher and to do some prep, so I only actually worked a few shifts for free — but I would have worked for free the whole time, because getting to learn from and be inspired by that crew was a priceless experience.

I ended up helping with a lot of prep, because I wasn't really even at a level where I could cook yet, and Carrie was really generous with her time. A lot of mornings, she would be there by herself, and I'd come in and learn how to do certain tasks like butcher a whole fish or pork shoulder and how to make sausage and roll pasta.

What I learned: So much, but one technique in particular was how to sous vide. That's really what made our food truck go from regular to kind of special. Carrie originally taught me that technique using octopus at Brazen — which I'd never seen in person as a home cook. She also taught me how to do it with chicken wings, and a few months later, I was working on the Ginger Pig menu and thought, "I wonder if I could sous vide char sui." For me, that was the lightbulb moment when I realized I could elevate and change the texture of pork shoulder.

Along with cooking and prep skills, I learned so many basic things, like costing and how to put away an order. But mostly the mentorship Carrie and the Brazen team offered really taught me about the importance of building a food community, and that was really special.

Before moving into Rosetta Hall in Boulder (where the Ginger Pig briefly found a home between the truck and the Denver location), I was really intimidated by some of the other chefs that were going to be there — some of them had worked at Frasca, one of them had worked at Chez Panisse. So a couple of people suggested I go stage again at other restaurants so I could get more comfortable. I chose some of my favorite restaurants to eat at: Hop Alley, Ace Eat Serve and Annette. Walking into those places was intimidating, too — but again, I learned so much and made some really amazing connections.

It's been such a strange road to get here, but it feels so right, and even though I'm not super comfortable talking about myself, I think it's important to share my story, because I hope it inspires someone else to do something they might be intimidated by and take a chance on themselves and believe in themselves.

If my story saves one person from a dead-end job, it's worth it.

Do you have memories of a first restaurant job that you'd like to share? Email [email protected]
KEEP WESTWORD FREE... Since we started Westword, it has been defined as the free, independent voice of Denver, and we'd like to keep it that way. With local media under siege, it's more important than ever for us to rally support behind funding our local journalism. You can help by participating in our "I Support" program, allowing us to keep offering readers access to our incisive coverage of local news, food and culture with no paywalls.
Make a one-time donation today for as little as $1.