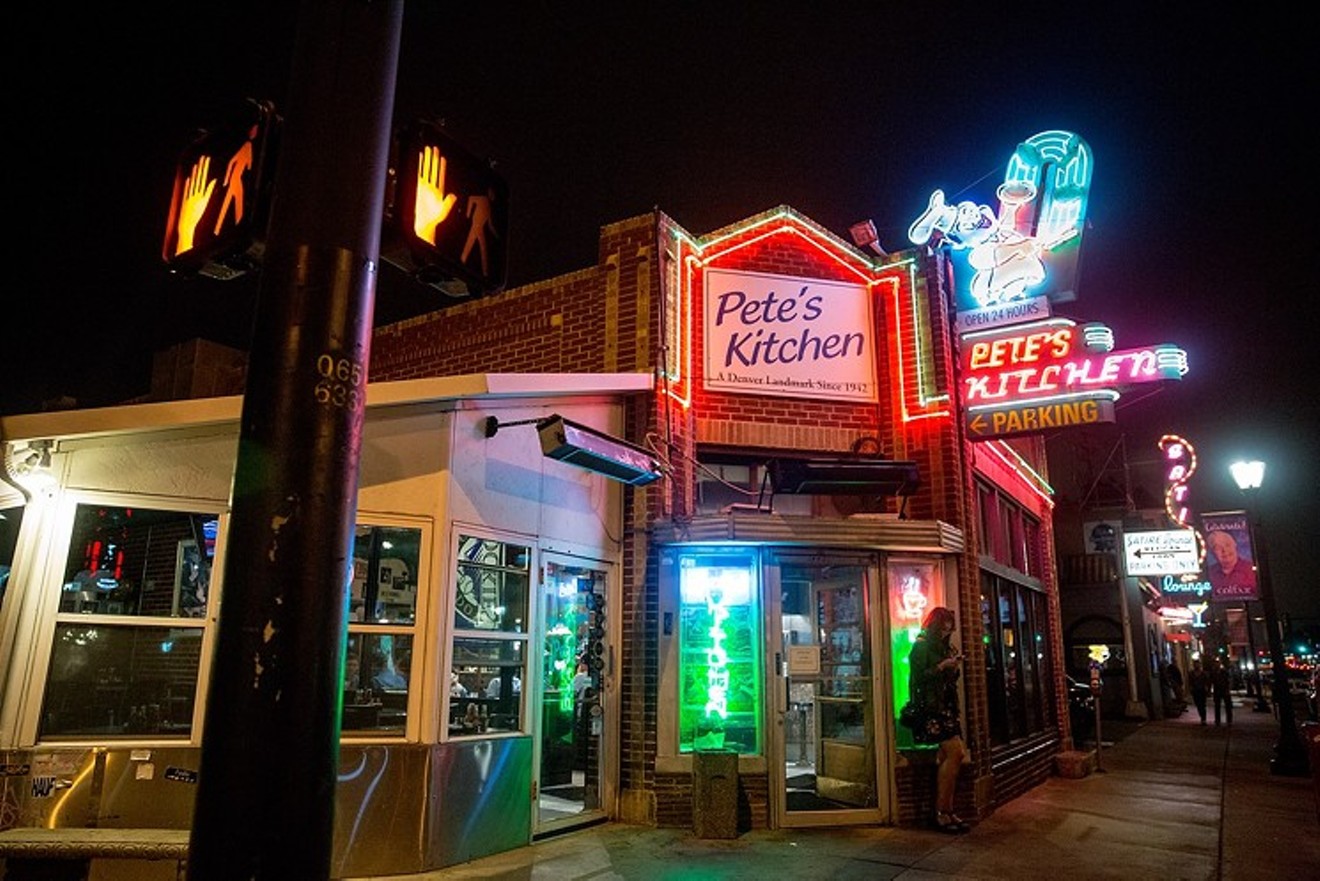 Bars are back, and now Pete's late night is, too — on weekends, at least. Danielle Lirette
Night owls, take note: A Colfax staple will once again be open during the graveyard shift on Fridays and Saturdays starting June 25.

As Denver's great post-pandemic reopening began gaining steam in May, we wondered about the future of all- night dining options in town — and so did Alex Barakos, the grandson of Denver restaurant legend Pete Contos, who passed away in 2019. Contos may be gone, but his family continues to run Pete's Kitchen at 1962 East Colfax Avenue, Pete's Satire Lounge next door and several other restaurants around town.

"Recently, I've been kind of surveying people," Barakos says of the decision to bring back 24-hour service to Pete's. "I've had people coming into the Satire asking for food, and I saw a line out the door at the Taco Bell on Colfax, and I decided it's time for people to come to Pete's after a night of shenanigans again." Nothing beats a post-bar Pete's breakfast at 3 a.m.
Molly Martin
It's hard to imagine Colfax without Pete's neon sign beckoning in the night, but during the pandemic, that became a real possibility. "There were days we didn't think we were going to get through it," Barakos admits. "But now we can really see the light at the end of the tunnel." And we get to keep seeing that neon sign pointing us toward late-night platters of chili cheese fries, gyros and root beer floats.

Not much changed at Pete's during the pandemic besides the hours, though regulars may notice some slight price increases. The decision to make that move did not come easily. "We give up some of our margins to make sure people who can’t afford to go out to other places have somewhere to eat," Barakos explains. "You can come here with just a few bucks and get a meal, and you can't say that about everywhere in Denver. That's what's unique about us."

But the cost of doing business has gone up significantly in the last sixteen months. Barakos says that he used to get New York strip steaks for $6 per pound. That same steak now costs $11.25 per pound, and that's just one example of the rising costs he's seen recently. "We can't afford to take the hit," he says, "so we raised prices enough to keep our margins, but our goal is always to stay well below the market."

For now, 24/7 service seven days a week is still on hold. Like nearly every restaurant in town, Pete's is struggling to find staff. "It's very competitive right now," Barakos says. "The staff are really the heart of the restaurant, so without enough people, we can't operate fully."

In the meantime, he'll close down the Satire at 10 p.m. on Friday and Saturday this week and go over to Pete's, where he'll put on an apron and work the line until the next shift comes in at 6 a.m. "I hope we get slammed," he says with excitement. "I've been dying for this. Anyone can come say hi. Let's do it!"
KEEP WESTWORD FREE... Since we started Westword, it has been defined as the free, independent voice of Denver, and we'd like to keep it that way. With local media under siege, it's more important than ever for us to rally support behind funding our local journalism. You can help by participating in our "I Support" program, allowing us to keep offering readers access to our incisive coverage of local news, food and culture with no paywalls.
Make a one-time donation today for as little as $1.