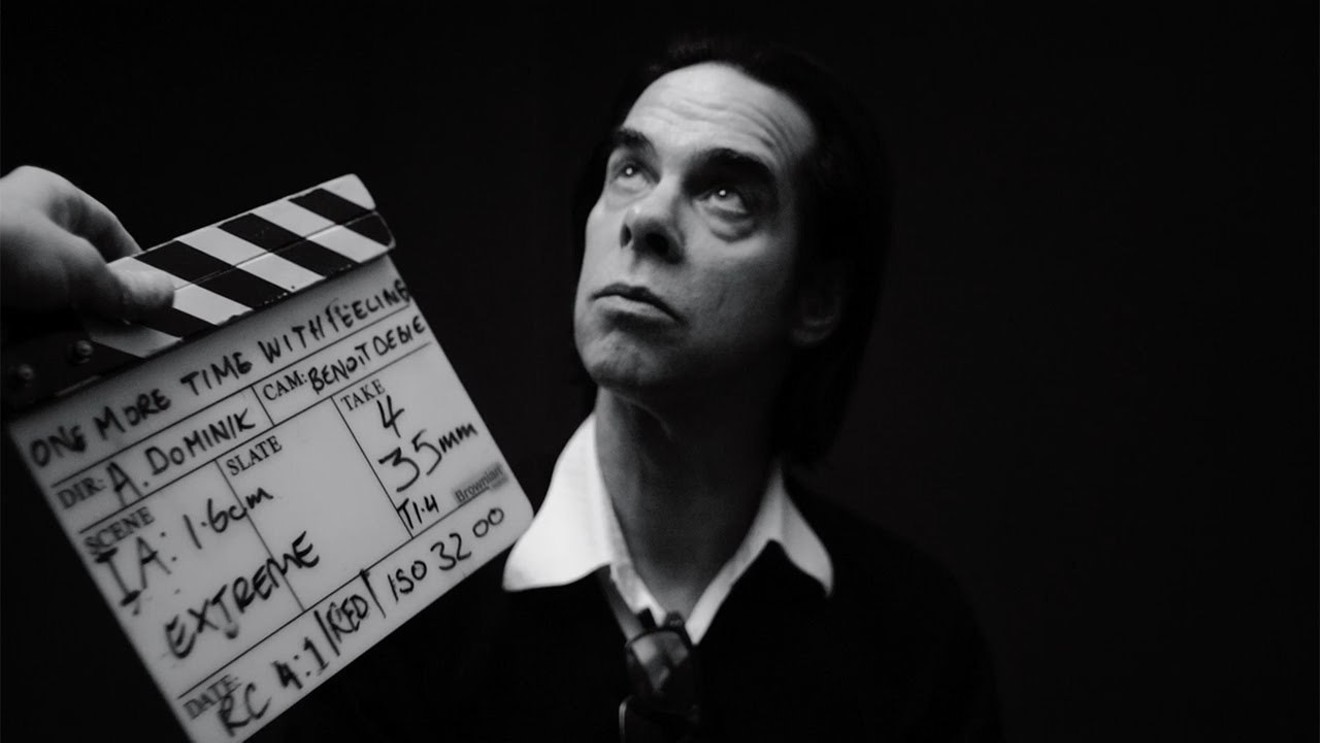 Don't resist the temptation to take off your 3D glasses while watching the Nick Cave concert doc One More Time With Feeling. Without them, as you watch the images projected atop each other, you can see Cave as something like he envisions himself in this film made after the death of his 15-year-old son Arthur: a man and artist in a constant state of change.

Director Andrew Dominik's use of 3D photography to document the making of Skeleton Tree, the first album Cave's recorded since the tragedy, could either make your viewing experience more immersive or alienating. On the one hand: 3D photography gives greater dimension to a photographic image. On the other: The footage is only able to foster the illusion of depth by separating an image into blurry, overlapping component parts. Still, the simultaneously destructive and reunifying qualities of 3D photography suits Skeleton Tree because Cave presents his personal grief through disjointed, impressionistic lyrics that tell the same type of story in various ways. All of Skeleton Tree's songs are about death, but most are not about the loss of a child: Semi-confessional ballads like "I Need You" and "Girl in Amber" respectively concern a missing lover in a red dress and a dead little girl.

In revealing interview segments, Cave tells Dominik (The Assassination of Jesse James by the Coward Robert Ford) that, in writing Skeleton Tree, he tried to avoid the kind of numbing "platitudes" about grief that fellow mourners routinely offer him in real life, like "[Arthur] lives with us in spirit." Cave also says that he's self-conscious about his lyrics because he fears that his complex sentiments might get "tangled up" in his words' literal meaning.

Those lyrics are consequently a touching (though often opaque) mix of optimism and melancholy. On "Anthrocene," he bemoans man's brief time on Earth by eulogizing the "astonishing" dawn of man. And on the title track he reassures listeners that "it's all right now" after regretfully observing that "nothing is for free."

One More Time With Feeling isn't all about Cave. Dominik emphasizes the collaborative nature of the musician’s process by shooting his own crew as they film Cave, his family, his band and producers while they in turn prepare to perform, record and/or listen to tracks from Skeleton Tree. You can see Cave bearing the weight of his contributors' expectations whenever he fidgets at his piano, or when he carefully chooses his words during interview footage. Dominik also catches Cave lowering his guard among friends and loved ones — the songwriter jokingly obsesses over his hair with longtime collaborator Warren Ellis ("How about now? How's the hair look now?"). You can even sometimes see Cave, that notably grim figure, smiling.

These candid scenes ground Dominik's larger-than-life vision of his subject’s musical performances. When Cave and his band play Skeleton Tree songs, Dominik shoots Cave with a 3D camera that circles around both him and first assistant director Stuart Renfrew, who in turn films Cave in 2D. Renfrew's 2D footage emphasizes the quirks of Cave's body language — especially conductor-like hand gestures — through medium close-ups while Dominik's 3D camera swoops around Cave's studio, passing through solid walls and even nearby people with the help of post-produced special effects. Renfrew makes us feel like we are witnessing a spontaneous performance. But Dominik reminds us that we have a privileged, superhuman view of Cave that we could only get from cinematic techniques like double exposures, tracking shots and voiceover narration.

You can't help but feel awed by Dominik's surreal approach when his camera drifts out of Cave's Brighton studio and over a computer-generated Earth while Cave and the Bad Seeds play "Distant Sky," a hopeful but prickly hymn about the dawning of a promising new day. Take your 3D glasses off when Cave laments that "they told us our Gods would outlive us, but they lied." If you do, you'll see Cave at his most vulnerable right before he ascends into the heavens.

KEEP WESTWORD FREE... Since we started Westword, it has been defined as the free, independent voice of Denver, and we'd like to keep it that way. With local media under siege, it's more important than ever for us to rally support behind funding our local journalism. You can help by participating in our "I Support" program, allowing us to keep offering readers access to our incisive coverage of local news, food and culture with no paywalls.
Make a one-time donation today for as little as $1.
Simon Abrams is a regular film contributor at Voice Media Group. VMG publications include Denver Westword, Miami New Times, Phoenix New Times, Dallas Observer, Houston Press and New Times Broward-Palm Beach.