Save Us, TV: Here Are the Shows to Cling to This January

Kim Matula (left) and Nathan Lee Graham are two of the "stars" in LA to Vegas, a workplace comedy about a flight crew that regularly travels the cursed route between the two title towns. Courtesy of Fox
We made it through A WHOLE DAMN YEAR. Sure, it felt like fifty centuries and we all look like Medusa, but we’re still (kinda) standing, so holy hell. I think that calls for some TV! We deserve it!

Jan. 1, Love & Hip Hop: Miami, VH1
Love & Hip Hop introduced Cardi B to the world, so save your negativity! Besides, reality TV could teach scripted TV a thing or two about how to create clear, compelling characters in the opening minutes of a series. Give me a villain! Give me a hero! Give me a musician to root for! Plus, Trick Daddy and Trina combined have more star power than the sky, and I couldn’t look away if I wanted to.

Jan. 2, LA to Vegas, Fox
A workplace comedy about a flight crew that regularly travels the cursed route between two hellmouths: Los Angeles and Las Vegas. WHY!?!? If you’ve ever been forced to fly this route for business, you know that it’s nothing but desperation and cologne for the first leg and then sadness and stale cigarette smell for the second. But, you know, this could be good for the comedy, right!? And it’s from creator Lon Zimmet, who worked on Happy Endings, Superstore and Unbreakable Kimmy Schmidt, all great shows, so this will probably be a great show, too. That means I’ll fasten my seatbelt securely, get out my barf bag, and see if I can make it through the damn pilot.

Jan. 3, grown-ish, Freeform
In this Black-ish spinoff, we follow Yara Shahidi's Zoey as she heads off to college at a Southern California university. I’m a little bit in love with Shahidi, in the least creepy way a grown-ass woman can be, so I’m fairly confident this is gonna be extra-wonderful. Besides, I love a good college TV show — A Different World, Felicity, Community, Undeclared, Saved by the Bell: The College Years!? All classics! — so there’s a 100 percent chance this is gonna be DELIGHTFUL.

Jan. 12, Philip K. Dick's Electric Dreams, Amazon
Every station needs a Black Mirror now, and I’m into it, because life is a hellscape and we’re all gonna die and be forgotten, and technology makes everything both better and worse, but mostly worse, because thanks to it, we’re reminded more often than ever about how life is a hellscape, even if we can order food from our phones. Okay, maybe it’s a trade-off? Anyway, this ten-episode sci-fi anthology based on Philip K. Dick's short stories is Amazon’s Black Mirror, and the cast is packing some serious star power — Bryan Cranston (who also directs an episode), Steve Buscemi, Anna Paquin, Janelle Monae, Richard Madden, Mireille Enos, Greg Kinnear, Vera Farmiga and Timothy Spall. I’m sure some of them will be great, and some will be trash, and most will be just okay. Just like life’s moments! I’ve come full circle — don’t question it! 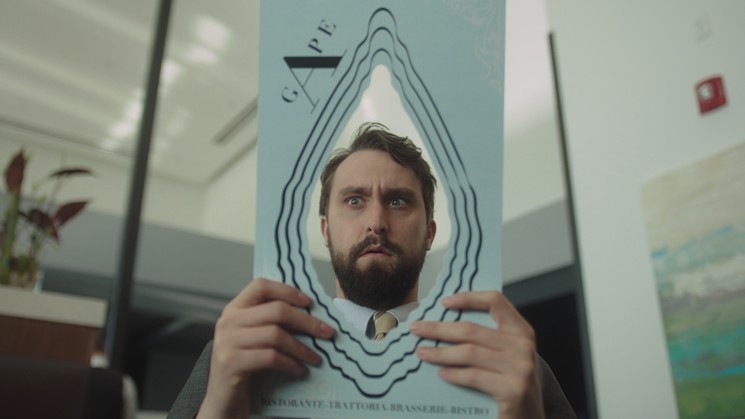 Matt Ingebretson is an executive producer, co-writer and cast member of Comedy Central's Corporate, which might be considered a lighter, goofier Mr. Robot.
Courtesy of Comedy Central
Jan. 16, Corporate, Comedy Central
It’s a darker, weirder (and thankfully more inclusive) Workaholics — or a lighter, goofier Mr. Robot, kinda? Well, there’s an Evil Corp stand-in, and these dudes are definitely dealing with some demons. I heartily LOL'd at the couple of episodes I watched, so I think this thing has potential! Which is a good thing, because the first season hasn’t even aired yet, and Comedy Central already ordered a second!

Jan. 22, The Alienist, TNT
Remember when this book was everywhere? Totally thought it was about aliens, but alas, “alienist” is just an archaic term for psychologist. Boo! Anyway, this series adaptation from EP Cary Fukunaga (yay!) stars Daniel Bruhl, Luke Evans and Dakota Fanning (love to see those Fanning girls employed!), and is all about the alienist investigating a serial killer in nineteenth-century New York City. The trailer is incredibly lush, and the show looks very high-prestige, so I’m intrigued to see why the hell it’s on TNT.

Jan. 22, Mosaic, HBO
You can already “play” this Steven Soderbergh murder mystery as a choose-your-own-adventure-style game in the Mosaic iOS/Android app. Now, HBO is releasing it as a mini-series, in Soderbergh’s preferred edit, and I’m excited to see how he messes up the perfect order I put it all into. This is worth watching to see how damn excellent Sharon Stone still is — I don’t care if she got Phil Bronstein’s toe bitten off by a Komodo dragon. I think Phil, if he looked deep into his heart of hearts, would know it was a small price to pay to be with such a glorious monster.

Jan. 22, Let's Get Physical, Pop
As a convert, I’ve always thought of the Jazzercise way of life (fit is IT!) as an area ripe for comedic exploitation. And I’m not just talking about me in spandex (boi-oi-oing!), but the whole world of aerobics celebrities, which is fascinating: Poor Richard Simmons had to endure a full-scale stalking so some dude could make a PODCAST; Zumba’s founder, Alberto "Beto" "Power Pedal" Perez, has legit pushed songs to the top of the charts just by playing them in a routine; and Jazzercise’s Judi Sheppard Missett is worth millions and yet blogs for free at Huffington Post. I mean, these people have stories to tell! So, anyway, where was I? Oh, yes, Let’s Get Physical. It’s a comedy starring Breaking Bad’s Badger (Matt Jones) as a loser who has to go into the family’s fitness empire after his dad dies. The cast also includes the trifecta of Jane Seymour, Chris Diamantopoulos and AnnaLynne McCord, so I’m ready for it to grapevine into my heart. (Also, just a plot line pitch from a fat girl who takes a lot of exercise classes: Please have a fat woman get through an aerobics routine and then have the rest of the students lose their minds with visible pride for her. It’s what happens! After every song, some sweaty skinny jogs over to give a high-five or massage your shoulders. They treat you like Rocky fighting the Russian. If you can do the box step and not die, they have, like, tears in their eyes. It’s so hilarious and great. Fat women of the world, I beg of you. Take a class and report back about how hard these women tripped over their protruding clavicles to tell you, “You can do it, girl!”)

Jan. 23, Waco, Paramount
Spike — remember them? The Network for Men? I’m sorry, I mean, The MEATWORK for ME LIKE TO ITCH CROTCH, NO FATTIES ALLOWED, ALSO NO HOMO, ALSO I HAVE A PENIS — has changed its name to Paramount, and is now producing something other than Guys Choice and MANswers (both real shows). I guess Waco, a six-part limited series about the 1993 standoff between the feds and the Branch Davidian cult, is one of its first attempts to cross over and allow a woman’s DNA to access the airwaves, and so far, not so good, boys. I mean, why are you gonna take fine-ass Taylor Kitsch and make him look like busted ol’ David Koresh!? Big mistake. Huge. I’m so sorry, but this is not the way to win over a female audience, and you know it! You thought you had me fooled, but I can tell you’re still Spike in Paramount clothing. NICE TRY, MY DUDES.

Here’s the brainstorming exercise where I came up with part of that blurb:
The MEATWORK for NO GIRLS ALLOWED
The MEATWORK for SAD, SAD BOYS
The MEATWORK for WE DIDN’T REALIZE LEGIT ALMOST ALL TV IS FOR STRAIGHT WHITE MEN BECAUSE WE’RE DUMB-AS-NAILS AND SO WE MADE A WHOLE STATION FOR IT, LATER LET ME TELL YOU ABOUT MY IDEA FOR A STRAIGHT PRIDE PARADE

KEEP WESTWORD FREE... Since we started Westword, it has been defined as the free, independent voice of Denver, and we'd like to keep it that way. With local media under siege, it's more important than ever for us to rally support behind funding our local journalism. You can help by participating in our "I Support" program, allowing us to keep offering readers access to our incisive coverage of local news, food and culture with no paywalls.
Make a one-time donation today for as little as $1.
Laura Beck
Contact: Laura Beck