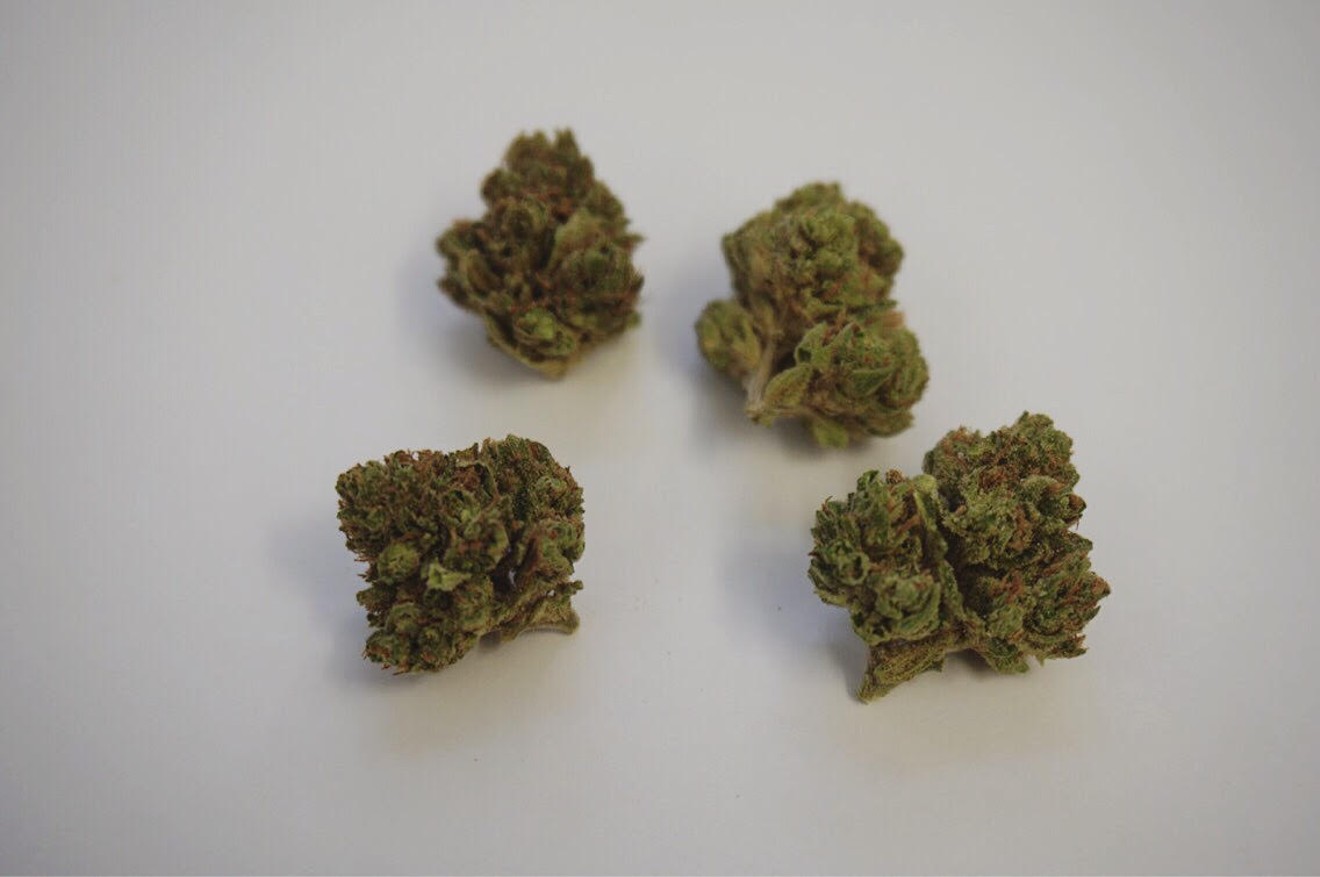 Get your fingers on this Booger pronto. Herbert Fuego
My librarian mother taught me never to judge a book by its cover, but anything I put into my body is a different story. It took years for me to get over pea soup’s pukey-green color, and I nearly got cold feet with magic mushrooms after finding out they weren’t just grown in shit, but also still had some shit left on them. While I let those same instincts keep me away from Cat Piss and Chocolope strains for too long, I didn’t make the same mistake with Booger.

Boogers themselves may be disgusting, but the word slapped on them is fun, young and endearing. Anyone with the nickname Booger is sure to have a gregarious attitude, booming laugh and sloppy eating habits, all of which are side effects of the strain with the same name. I first came across Booger in early 2016 after a friend from Chronorado Medical recommended it, and I’ve had a soft spot for the 50/50 hybrid ever since.

Booger’s parents, Bubba Kush and Strawberry Cough, are beloved, powerful and virtually opposite in effects. Bubba Kush is known for pungent flavors of hash, chocolate and pine — and knocking users out with little regard for their focus or carb-counting. Strawberry Cough is a crowd favorite for its sweet, syrup-like strawberry flavor and stimulating high. Thanks to zesty pine and subtle skunky-diesel notes, the result isn’t quite like chocolate-covered strawberries on the palate, but the high is very much what one would expect in this clash of the titans.

Booger starts out by sharpening creativity and inducing cerebral euphoria while simultaneously reducing stress, both mental and physical. The therapeutic properties have made it one of my favorite post-workout and after-work strains, as has its tendency to kickstart my appetite. The even-keeled high is easy enough to handle without getting tired too quickly, but it can be a little hazy for low tolerances.

Despite being labeled a Colorado-grown strain, Booger isn’t as widely available as you’d think. Caregivers for Life, Chronorado Medical, Denver Kush Club, and Nature’s Herbs and Wellness have all carried Booger in the past, while Lightshade currently has it in concentrate form; wholesale Denver cultivator Sundance Gardens also grows it infrequently for some local shops. Denver Kush Club grows its own in-house, with dark, round buds like Bubba Kush that taste like a dank fruit salad. If you’re lucky enough to come across Sundance Gardens’ cut, though, try it if you’re a hybrid fan. The grow has produced some fine strains, even partnering with Willie Nelson’s line of pre-packaged flower and pre-rolls.

Looks: Booger has a bud structure similar to Bubba Kush’s, with round, compact calyxes segmented across the stems, but with the bright-green color and frosty trichome coverage of Strawberry Cough.

Effects: Despite its mix from nearly opposite ends of the strain spectrum, Booger’s high is even, but those clashing genetics and potency can make users a bit spacey — so smoking it all day is likely to have a zombie effect after a few hours. Its appetite-enhancing and relaxing effects make it a great post-workout strain, as well as one for stress reduction and minor inflammation.

Commercial grower’s take: “I wouldn’t recommend it for beginners, but it’s not that hard after you have a few under your belt and get used to topping. Good strain for hydro and indoor grows, and I’ve heard of both heavy-nutrient and organic-based approaches — but it all depends on what you’re going for, really. It’s naturally a high-yielder, so I tend to go more organic to preserve that sweet, skunky flavor profile.”