Skunked is now open at 2683 East 120th Avenue in Thornton. Courtesy of Skunked
Thornton's new dispensary owners are so proud of the aroma inside their store that they named it after the smell.

Skunked, now open at 2683 East 120th Avenue in Thornton, is the child of marijuana industry professionals Stephanie Hull and Desna Mandich. Hull is the operations manager for Colorado's Rocky Road dispensary chain, while Mandich is a consultant for marijuana businesses in the state. Upon learning that the City of Thornton was preparing to hand out a fourth dispensary license through a lottery drawing, the two thought it was time they ran their own store.

"I was just trying to find tax information on Thornton's website when I found out. We've known each other for a while, so when this license became available in Thornton, we had to partner up," Hull recalls.

The business partners submitted an application for the lottery, and in March were selected for the last dispensary license available in Thornton. The license was formerly held by Sweet Leaf, a Colorado dispensary chain that was shut down by state regulators and law enforcement in 2018 and 2019 for illegal marijuana sales. That license was sold to Xclusive Cannabis, which later surrendered the license to the city.

The original license was for a building at 2251 East 120th Avenue, but Hull and Mandich chose a new location less than a half-mile down the same street, and got the place open in under ten months. Such a turnaround is fast for a brand-new dispensary, which can take over a year to open depending on the building, local rules and required renovations. But Thornton City Council members visited Skunked on December 1 to cut the ribbon at the town's new pot shop. 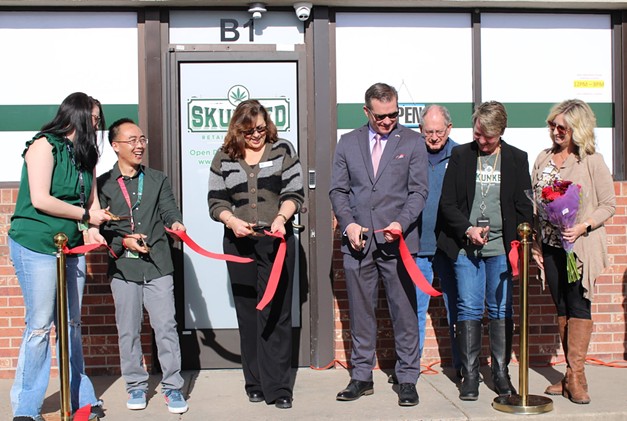 Skunked opened fast, but dispensaries are stuck in the slow lane right now. Marijuana sales are on pace for a 20 percent drop from 2021 to 2022, according to the Colorado Department of Revenue, and the average price per pound of flower has dropped nearly 59 percent since last year, a record low. However, Hull says she's confident that the new store, located in a city of 140,000 people, will be a success.

"Of course, the current [market] is a concern, but I've been in the industry long enough, and the other dispensaries I'm overseeing are doing really well.  And there are only four dispensaries in Thornton, so that's a really good ratio for the amount of residents," she points out. "It's in a really good location."

Hull is still working for Rocky Road, which also has a store in Thornton, but the two ownership groups aren't connected. According to Hull, Skunked is one of a small handful of women-owned dispensaries in Colorado, and she and Mandich are the only registered owners.

Like all dispensaries in Thornton, Skunked only allows recreational sales. Hull says that while the store offers products from a variety of cannabis brands, there still aren't any classic Skunk strains on the menu. Named after the animal it smells like, original Skunk marijuana genetics were hard to find before recreational legalization and don't satisfy most commercial growing demands, but the aromatic characteristic is common across cannabis.

Hull says she hopes to fix that shortcoming soon, and have plenty of Skunk at Skunked.
KEEP WESTWORD FREE... Since we started Westword, it has been defined as the free, independent voice of Denver, and we'd like to keep it that way. With local media under siege, it's more important than ever for us to rally support behind funding our local journalism. You can help by participating in our "I Support" program, allowing us to keep offering readers access to our incisive coverage of local news, food and culture with no paywalls.
Make a one-time donation today for as little as $1.