Adam Foster Hoban Law Group
In a 34 to 1 vote, the Colorado Senate passed the Post-Traumatic Stress Bill; today, March 8, it's scheduled for a public hearing before the House State Affairs Committee.

Adam Foster, lead attorney on the case, says it's time for Colorado to join the 21 states with medicinal cannabis laws that have approved PTSD as a qualifying condition. 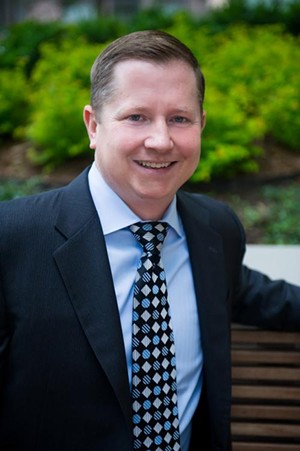 Adam Foster
Hoban Law Group
"Colorado has been the leader in so many different regards with regard to the cannabis plant, but we are very much behind the curve as far as using medical cannabis to treat PTSD," he says. "Every other state that has considered the issue has approved medical cannabis for the treatment of PTSD, and Colorado is really an outlier in that regard."

This is not an issue about pot, Foster continues; it's about veterans. A number of the veterans he's worked with have attempted suicide because of untreated or poorly treated PTSD.

"They really resist in anguish and they're at the end of their rope," Foster says. "To tell someone who is in that state not to try marijuana because there could be side effects is a ludicrous thing to say."

Matt Kahl is a veteran who attempted suicide before finding cannabis. After his discharge from the Army in 2011, Kahl say, he was taking multiple medications both for the physical pains he was suffering from injuries sustained in combat and also for emotional trauma.

"I was medivac with TBI (traumatic brain injury), spinal injuries, facial fractures, and I had a lot of issues afterward," he says. "Not just PTSD, but pain."

He says he'd tried everything and was on a massive amount of drugs. His liver failed and his kidneys started to go, and that's when he knew something had to change. A friend asked if he'd tried cannabis. Kahl was relucant at first — he even threw his friend out of the house for suggesting marijuana. But eventually, the friend came back and said Kahl just had to try marijuana once. If it worked, it would help; if it didn't, he wouldn't have to use it again. But at least he'd have tried.

"I gave it a shot and almost instantaneously I recognized it could help," Kahl remembers. "It was the first time I was able to relax in a long time." 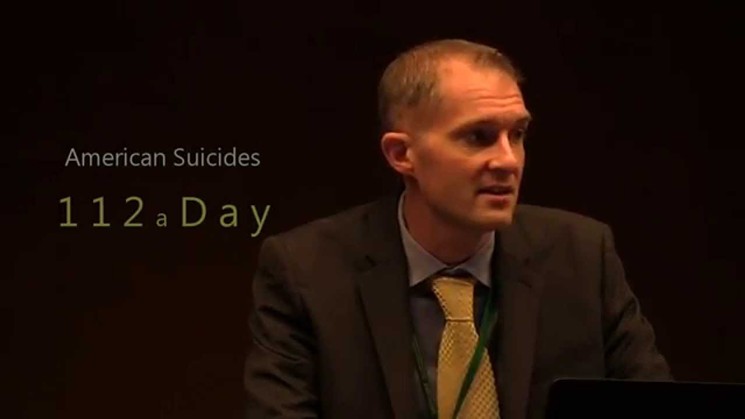 Matt Kahl on treating PTSD at the National Cannabis Summit 2015.
YouTube
It took Kahl about a year to wean himself off all the other medications he was on; now he uses cannabis as his only treatment medication. In 2014, he founded Veterans for Natural Rights to help others. "Our position on cannabis is that no one is free so long as nature is illegal. It's our opinion that nature is not a crime," he says.

Foster, an attorney at Hoban Law Group, has met with Kahl and others like him, and says they've inspired him to take the case pro bono so that they can get the care they need.

"They're just trying to survive and stay alive," Foster says. "The argument about potential side effects we feel really ignores the reality of the suffering that people are going through and the lack of good treatment options."

Foster's paralegal on the case, Stephanie Davis, has a personal stake in the outcome: Davis's husband is a combat veteran and served as a medic in Iraq. She says that after he started exhibiting PTSD symptoms, they moved to Colorado to have access to medicinal cannabis. Even in Colorado, though, it's hard for her husband to get access to the medicinal cannabis he needs because PTSD is not a qualifying condition for the specific strains geared to his condition.

"These strains are just not available on a recreational or retail side because they are high in CBD," she says.

Foster agrees, and says it's impossible for most patients to find what they need at the recreational dispensary counter. "A lot of the time, the high-CBD strains have other cannabinoid profiles that are effective for treating PTSD and anxiety and related conditions, but aren't popular in the retail market," he says.

CBD strains are so specific, Kahl notes, that he has to grow his own medicine at home to get the correct terpene profile for his condition. He uses four to seven different strains that all help to reduce anxiety. "There is a wide variety of phytocannabinoids in the plant, and some of them have amazingly different effects. When I first got to Colorado, a lot of the high-THC strains would affect me in a negative way — I'd get anxiety," Kahl says. "I looked around for strains with unusual chemotypes and started seeking out individual cannabinoids."

Kahl says the bill is a necessary step for veterans in Colorado, as well as other sufferers of PTSD. "If it passes, it's going to be a win for every single one of the half-million veterans in this state and every other individual with PTSD," he says.