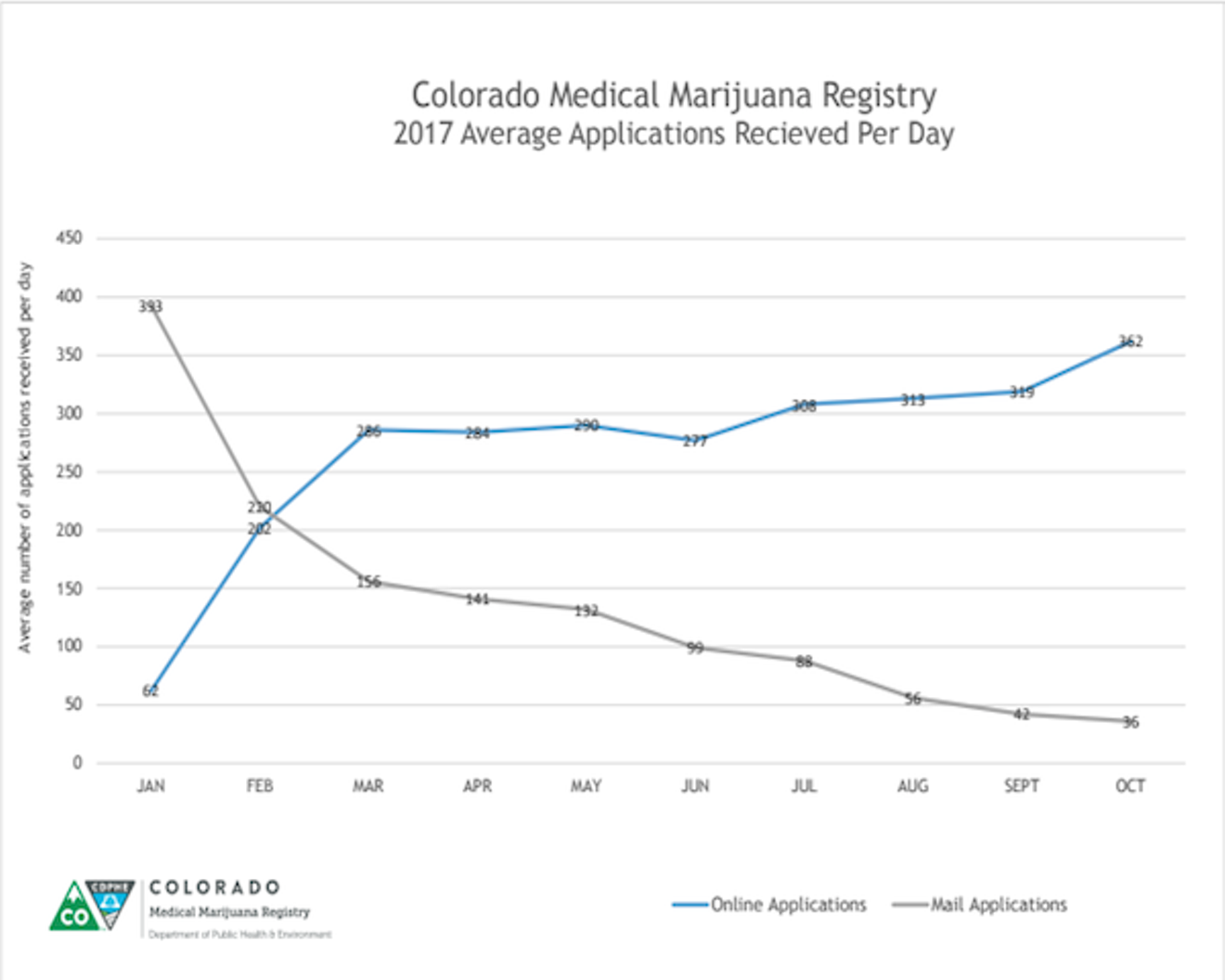 2017 MMJ Registry data. CDPHE
The Colorado Medical Marijuana Registry has received its fair share of criticism for extensive application backlogs in the past, with some patients waiting anywhere from 35 to 60 days to learn if they had been approved. The complaints even seeped into 2017, when thousands of applications were stuck in the mail in March, two months after the online application option went live. At the time, the Colorado Department of Health and Environment, the agency overseeing the registry, promised to handle the issue...and implored patients to be, well, patient.

Eight months later, the CDPHE appears to have to have made good on its vows.

While continuing to make other updates, MMJ Registry program manager Natalie Riggins has overseen improvements to the online registry that have reduced the waiting time for application approvals and denials to less than one month through the mail, and one day for online applications. The move was costly, since it involved changing from an online platform developed in-house to a third-party system. "It needed upgrades if patients were going to use online registration," Riggins explains. "We wanted to allow the patient or physician to be in control of their accounts, and not mail in their applications." 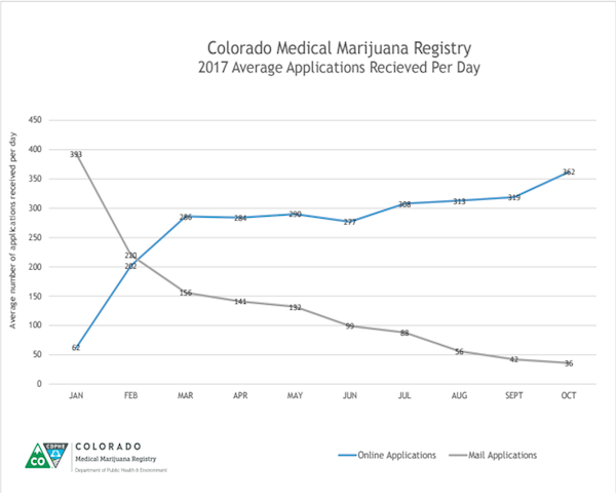 2017 MMJ Registry data.
CDPHE
In addition to being able to apply online, patients will soon be able to make updates to any application errors they made while filling out the initial application, something that used to take weeks through the mail; that update will be made available to users within the next several months.The registry could receive anywhere from 1,500 to 2,000 pieces of mail per day that were mostly from patients, according to Riggins. By applying online, patients can now potentially receive their medical marijuana card electronically the next business day.

"It's really helped from a confidentiality and security standpoint," she says. "Previously, applicants were waiting 35 days or longer to find out [about their applications]." Although it took a few months for the transition to take hold, by last month online applications outnumbered paper applications ten to one, according to CDPHE data.

"What we're really trying to focus on is enhancing patient service, so we made tips for online application — kind of a process guide for users with snippets of information on what to avoid. We've gotten a lot of good feedback so far," Riggins adds.

Considering that there are more than 90,000 medical marijuana patients currently registered with the CDPHE, that means a lot fewer headaches, both for the patients and the registry.

And one more change: While most of us still refer to medical marijuana cards as red or purple cards because of the colored ink on the first two versions of the license, Riggins says both are a thing of the past, thanks to the online applications. Upon registry approval, patients can now either download an electronic copy of their card for their mobile device or print it off for use.

"We had issues with it because the ink was rubbing off a lot and the material wasn't great," she notes.