Four Years After Undercover Cops Showed Up, Tetra Marijuana Lounge Has Its Day 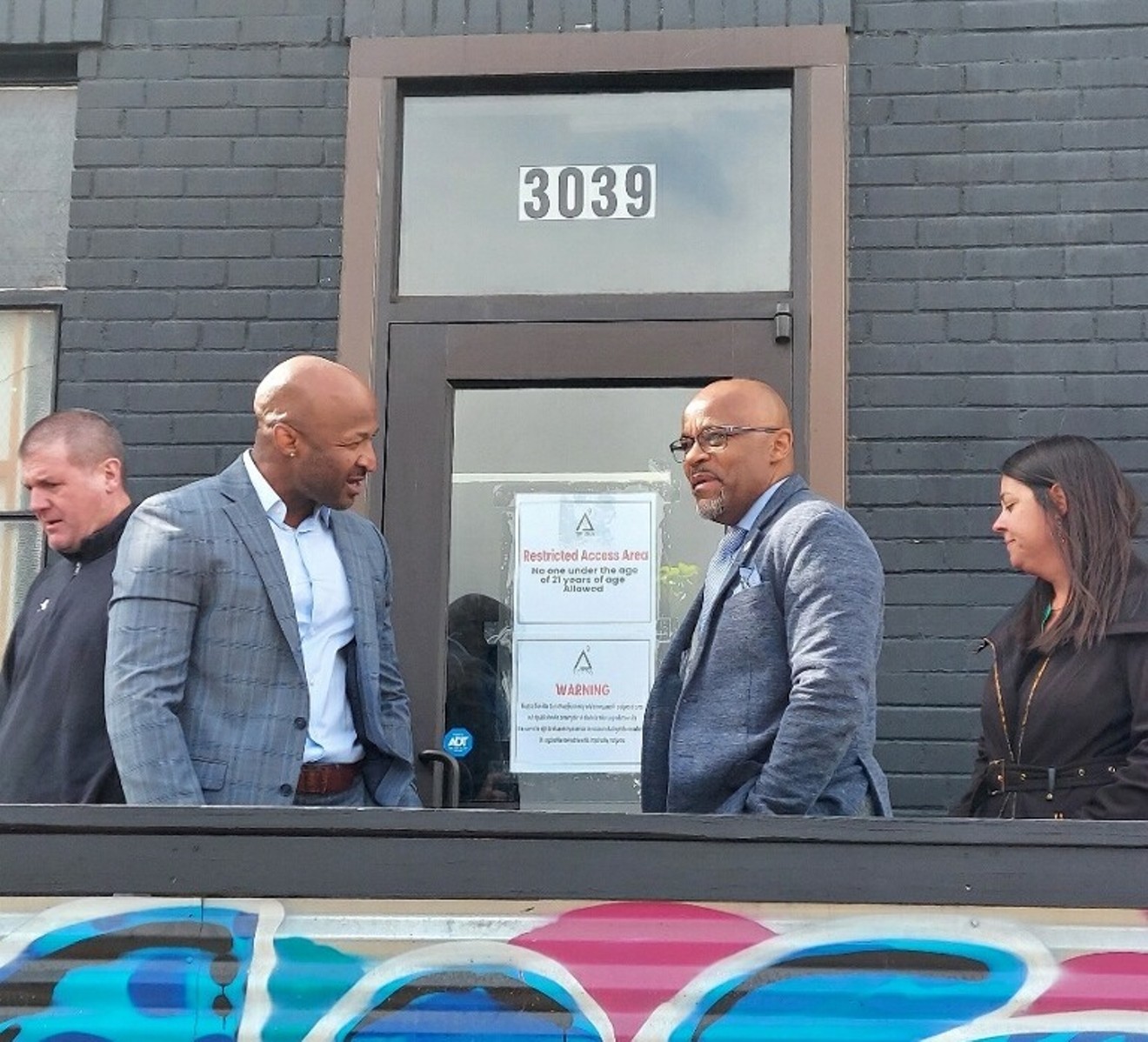 Tetra Lounge owner Dewayne Benjamin greets Mayor Michael Hancock and Denver Department of Excise and Licenses director Molly Duplechian during a ribbon-cutting ceremony March 30. Graydon Washington
It's been quite the slow burn for Tetra Lounge and owner Dewayne Benjamin. For over four years, the marijuana club's operations were swept under the rug, known but unknown at the same time.

A private marijuana lounge since 2018, Tetra has served as that rare spot where tourists and residents can consume marijuana outside of their hotels and homes — but the venue has always operated in a gray area. On March 30, Tetra was finally out in the open, with the Denver mayor and Colorado governor both standing in front of the RiNo pot lounge, singing Tetra's praises during a ribbon-cutting ceremony.

"I'm very excited to be at the opening of Colorado's newest business," Governor Jared Polis said to a crowd outside of the club at 3039 Walnut Street, praising it as "the nation's first" indoor-smoking venue licensed for pot consumption at the state and local level.

Tetra is still a couple of city inspections away from opening to the public (21-and-over), right in time for the 4/20 holiday in April; until now, it had been operating as a private, members-only spot. When we first wrote about it, most of the cannabis community hadn't heard of Tetra. The City of Denver had, though.

Undercover officers with the Denver Police Department were sent to Tetra on April 20, 2018, just two months after it opened. The police wrote citations for various violations regarding public marijuana use and the Colorado Clean Indoor Air Act, a law that applies to smoking in public.

Mayor Michael Hancock's administration had never been big on the private model that marijuana-friendly clubs, events and tour companies had employed after the passage of Amendment 64. Earlier pot clubs, a cannabis church and tour companies have all battled it out with the city in court over what was considered private and what was considered public pot use. Most of these businesses have since shut down or quit operating in Denver, but Tetra hung in there — and now its persistence has paid off.

Not only has Hancock's administration signed off on Tetra, but the mayor gave a speech in support of the place at the ribbon-cutting. "I'm here because I'm proud of Dewayne and Tetra...he has 15,000 members, either on daily or annual membership," Hancock said. "That's a big deal. We're glad you can come out of the shadows, and [can] operate right."

Instead of vocally pushing back against the city, owner Dewayne Benjamin recognized something that the Denver City Attorney's Office had publicly alluded to: The city resources required to discipline private pot clubs weren't worth the relatively small fines, usually in the hundreds of dollars, that came out of the actions. Benjamin and the Department of Excise and Licenses cultivated a more collegial, cooperative relationship as time went on, and he was able to keep his business open as other enterprises closed.

Not that there weren't challenges along the way. 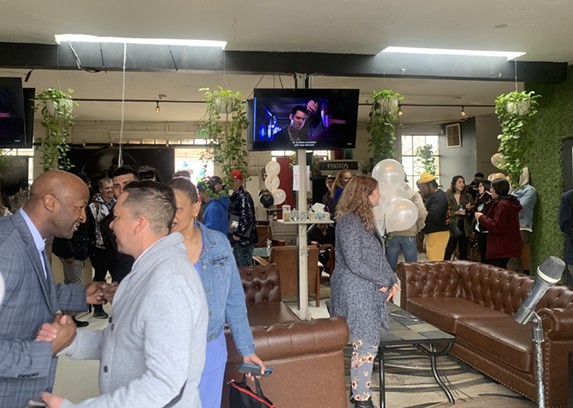 Tetra Lounge hosted a ribbon-cutting on March 30 in advance of an April 15 grand opening.
Thomas Mitchell
Denver began local marijuana hospitality licensing in 2017, but that program banned indoor smoking and certain types of food vending, among other activities. Only one business was able to stay open under the program, while  Benjamin continued operating as a private business. But he still had a desire to allow indoor smoking, as he explained in detail during a 2020 interview.

"With most of my clients being tourists, they're not exactly well-versed on only eating edibles or doing dabs," he said at the time. "People universally know how to smoke marijuana with a joint, though, and then they'll put it out when they're high. That's pretty much the premise of me staying private as long as I have. It has its advantages, because I've been able to maintain and control my clientele, and I've also been able to provide an atmosphere and public safety for cannabis use. I've never had an issue with fights, people passing out or emergency calls over the two years I've been open. That's something I'm very proud of.

"As far as the disadvantages go, now that the hospitality license was passed at the state level and the Colorado Clean Indoor Air Act added marijuana and vaping, there's a stigma," he continued. "People think because we're not licensed, we're not legal — but under this private model, we are legal. We've worked with the city for over two years to create this relationship."

The door toward full licensure began opening in 2019, when the Colorado Legislature passed a law creating a statewide marijuana hospitality licensing program. Local governments had to opt into it first, however, and then the COVID-19 pandemic hit. Benjamin was forced to close his club during long stretches of 2020 and 2021 under public-health orders; meanwhile, the push for a new marijuana hospitality program stalled.

Denver City Council eventually approved a new social pot consumption ordinance allowing indoor smoking at licensed venues on April 20, 2021. Benjamin successfully licensed Tetra for pot hospitality at the state level later that year, and was one of the first applicants under Denver's new pot hospitality program last November. He's been updating Tetra in anticipation of the regulations that come with state and local licensing, including adding new indoor air filtration systems and a renovated outdoor patio. .

Excise and Licenses finally announced that Tetra had been approved for the city's third marijuana hospitality license on March 21. (The first license was grandfathered in for the Coffee Joint under the old hospitality program, but the Coffee Joint doesn't allow indoor smoking, while the second license was issued days before to a Capitol Hill hotel that is months away from opening a marijuana parlor.) Benjamin is planning a grand opening on April 15, the weekend before 4/20 — and four years after undercover cops came sniffing around the place.

"I got the governor and mayor here," Benjamin proclaimed to a packed house. "It's the dopest party, and we can't even smoke."
KEEP WESTWORD FREE... Since we started Westword, it has been defined as the free, independent voice of Denver, and we'd like to keep it that way. With local media under siege, it's more important than ever for us to rally support behind funding our local journalism. You can help by participating in our "I Support" program, allowing us to keep offering readers access to our incisive coverage of local news, food and culture with no paywalls.
Make a one-time donation today for as little as $1.