Filing for federal tax-exempt status for a cannabis-related nonprofit tends to scare a lot of people away, so nonprofits haven't seen the same windfall as cannabis entities in other sectors. The regulatory worries don't end there, either, thanks to laws banning cannabis samples and consumption at public events and other strict regulations unique to legal pot. Even in Denver, pot nonprofits struggle to find a safe space in which to operate and grow.

To stimulate that growth, some of the original members of cannabis trade group Women Grow created a nonprofit to help others. "We found some holes within the community that we wanted to support and help," explains Nuvolution co-founder Anne Marie Doyle. "We started with the idea of pairing skilled volunteers with nonprofits that needed support, but they'd have various roadblocks to complete their missions."

Nonprofits wanting to help medical marijuana patients or pot consumers, fund scientific studies or educate the public about cannabinoid science can face challenges involving marketing, funding and other essential management responsibilities because of the plant's Schedule I status, according to Doyle. So she teamed up with Twisted Sister Yoga CEO Shelly Jenkins to create Nuvolution in 2017, as a way to help cannabis nonprofits and socially minded businesses take off.

The organization doesn't help only cannabis entities; that's just where most of its expertise comes from. "We wanted an affordable space for nonprofits to educate the community about cannabis," Doyle remembers. "Whether it's dealing with an illness or achieving a form of social activism, sometimes people need a little help with what they want to build."

Nuvolution has been conducting most of its educational efforts in various restaurants and venues around town, holding its most recent gathering at the Cheba Hut on East Colfax Avenue. But a generous donation is about to take that show off the road.

The owner of a commercial building in north Denver has granted about 2,200 square feet of warehouse space to Nuvulotion and the nonprofits and businesses it helps, providing an incubation and event space where they can spread their canna-gospel. The property owner of 3835 Elm Street wishes to remain anonymous, Doyle says; the building also houses DANK dispensary and the pot shop's growing operation. 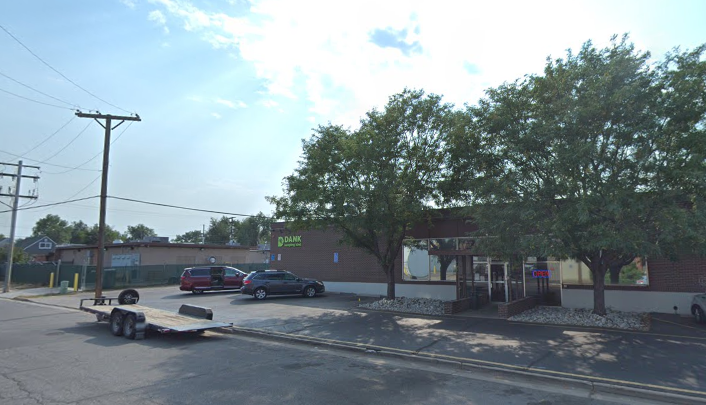 The donated space shares the building with DANK dispensary, at 3835 Elm Street.
Google Maps screenshot
The nonprofit incubator is still figuring out some of its next steps, but Nuvolution has already begun preparing the space as a "cannabis history museum," Doyle says, and is planning its first open discussion at the space. Partnering with the CannAbility Foundation, it will bring in cannabis educator Dr. Regina Nelson to talk about how medical marijuana can help children; the event is expected to take place sometime in the fall.

"When the topic gets brought up, some people are thinking teenagers in the ’70s, lighting up joints in the bathroom to get high," Doyle explains. "That's not what we're talking about. We're talking about kids who need it for medical reasons."

In addition to discussions about industrial hemp and cannabis, the group plans to connect nonprofits with individuals who could benefit from their services, such as a cancer organization that provides patients with stipends that can be used to buy medical marijuana or other medications.

The space was donated rent-free for a year, Doyle says, and her team is still figuring out how to maximize its potential. Other possibilities include arts and crafts, yoga, meditation and other wellness-inspired activities and classes — but none of them will involve pot consumption, she stresses.

"A lot of people need help with the dialogue around [cannabis]. They need some CliffsNotes before starting this conversation, and that's where we want to help," she says. "Now that we have our own space, we can hold stuff during the day, evenings, and whenever we want."
KEEP WESTWORD FREE... Since we started Westword, it has been defined as the free, independent voice of Denver, and we'd like to keep it that way. With local media under siege, it's more important than ever for us to rally support behind funding our local journalism. You can help by participating in our "I Support" program, allowing us to keep offering readers access to our incisive coverage of local news, food and culture with no paywalls.
Make a one-time donation today for as little as $1.