Jacqueline Collins
What a difference four years makes. In 2014, Oklahoma and Nebraska were suing Colorado in federal court for this state's decision to legalize recreational marijuana, but now the Sooner State is starting to catch up with Colorado's affinity for the plant — and in some cases, even surpass it.

On Tuesday, June 26, voters approved Question 788, making Oklahoma the thirtieth state in the country to legalize marijuana for medical purposes. The measure passed with 57 percent approval and is being lauded by MMJ advocates for its broad-reaching nature. Unlike the large majority of states with MMJ programs (including Colorado), Oklahoma will allow doctors to recommend marijuana for any condition they see fit.

The victory represents a shifting tide in the traditionally Republican state as legalizing marijuana becomes less of a bipartisan issue. Opponents of the measure reportedly spent around $500,000 on TV ads to derail the measure, but they were missing the man who'd helped push the infamous 2014 lawsuit against Colorado: Oklahoma's then-attorney general, Scott Pruitt.

Back then, Pruitt took issue with the Obama administration for "not enforcing federal drug law." However, the United States Supreme Court refused to hear the lawsuit in 2015, and President Donald Trump elevated Pruitt to administrator of the Environmental Protection Agency — and a target for probes into lavish spending habits. Oklahoma is currently waiting to elect a new AG, with just one major candidate (interim AG Mike Hunter) publicly opposing the measure. 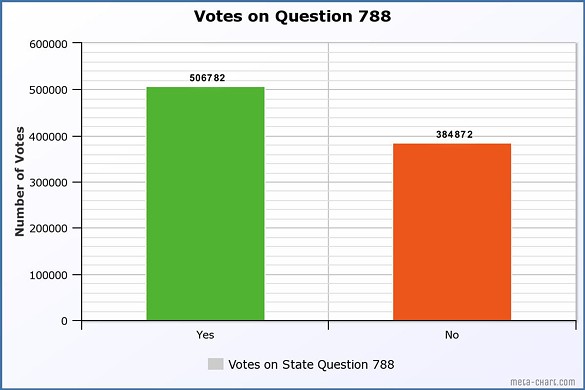 Oklahoma passed a measure legalizing medical marijuana on June 26.
Courtesy of Americans for Safe Access
As currently written, the measure allows future Oklahoma MMJ patients to possess three ounces of marijuana in public (two more ounces than Colorado's limit) and have up to eight ounces at home. Concentrates and edibles will also be allowed, as will growing at home. The law would even let those arrested with 1.5 ounces of flower or less to "state a medical condition" in hopes of seeing a felony possession offense reduced to a $400 citation.

"Question 788 is a tremendous victory for patients and for access to medical cannabis. We hope we can replicate this success in Utah and Missouri this November when those states will vote on improving their medical cannabis programs," David Mangone, government affairs director for drug-reform organization Americans for Safe Access, says in a statement. "However, it's still possible for Oklahoma Governor Mary Fallin and the Oklahoma state legislature to hamper the initiative through regulatory change and administrative delay. We cannot let the will of the voters be undermined!"

In a statement released shortly after 788's passage, Fallin said that her office will respect the voters' will and work to properly regulate MMJ in Oklahoma, but the governor took issue with the scope of the measure.“I respect the will of the voters in any question placed before them to determine the direction of our state. It is our responsibility as state leaders to look out for the health and safety of Oklahoma citizens," she said. "As I mentioned in previous public comments, I believe, as well as many Oklahomans, this new law is written so loosely that it opens the door for basically recreational marijuana. I will be discussing with legislative leaders and state agencies our options going forward on how best to proceed with adding a medical and proper regulatory framework to make sure marijuana use is truly for valid medical illnesses.”

While one of Colorado's neighbors just took a significant step forward in reforming its marijuana laws, another took one step back. On the same day that Oklahoma legalized MMJ, the Arizona Court of Appeals ruled that marijuana concentrates aren't protected by the 2010 Arizona Medical Marijuana Act, effectively outlawing edibles, wax, shatter, bubble hash and any other extracted form of THC. MMJ advocates and their legal representatives are expected to appeal the decision to the Arizona Supreme Court.
KEEP WESTWORD FREE... Since we started Westword, it has been defined as the free, independent voice of Denver, and we'd like to keep it that way. With local media under siege, it's more important than ever for us to rally support behind funding our local journalism. You can help by participating in our "I Support" program, allowing us to keep offering readers access to our incisive coverage of local news, food and culture with no paywalls.
Make a one-time donation today for as little as $1.