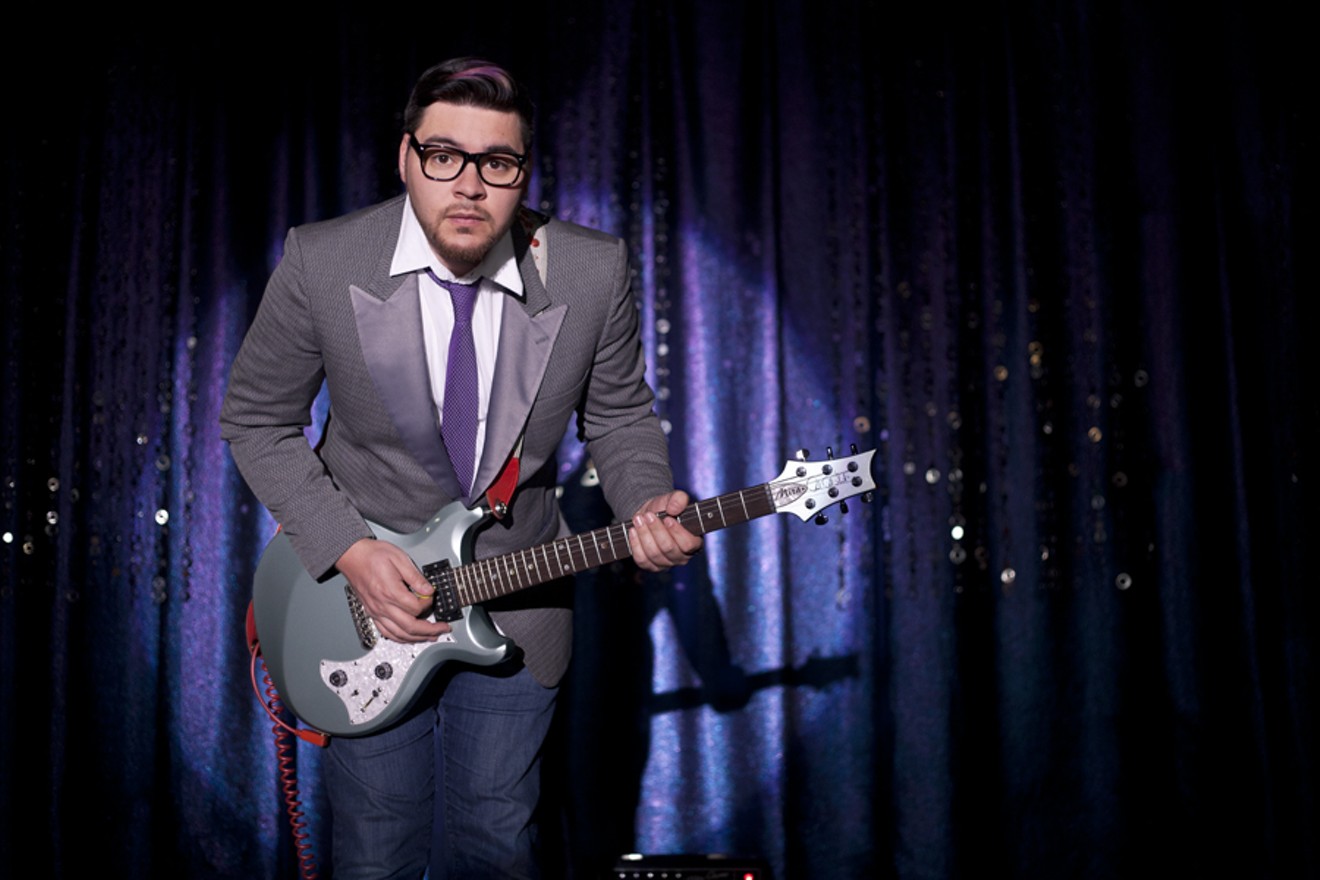 Flobots original guitarist Andy "Rok" Guerrero has rejoined the band. Crystal Allen Photography
Fifteen years ago, Denver indie rap group Flobots introduced itself to the world with Flobots Present: Platypus. On Friday, October 23, the band will release a remixed and remastered version of its debut EP on all major streaming services. The EP includes the first iteration of Flobots' best-known song, “Handlebars,” which fans would sing along with at concerts even before it was re-recorded and re-released on Fight With Tools two years later as part of a deal with Universal Republic Records. The song went on to be a Top 40 radio hit.

About four years after the release of Fight With Tools, guitarist Andy “Rok” Guerrero parted ways with the group, but he reunited with the original members two years ago when they performed at the tenth anniversary of Youth on Record, the nonprofit that Flobots started as Flobots.org. That show helped Guerrero “mend fences” with Flobots MCs Jamie "Jonny 5" Laurie and recently appointed Colorado Music Ambassador Stephen "Brer Rabbit" Brackett.

Guerrero says that in late 2019, he and other bandmembers started talking about the guitarist rejoining Flobots. “I just thought that with the 2020 election coming up, it was like, if there's ever a time for us to try to put out some new music or do something or be effective, 2020 seems like the year to do this,” Guerrero says.

While the bandmates talked about touring before the election to mobilize voters, those plans had to be scrapped because of COVID-19. But Flobots is playing on election night, Tuesday, November 3, at the Oriental Theater, with Guerrero officially back in the fold. The socially distant concert will also include special guests, as well as election coverage and a group discussion with the band and community leaders.

Since Guerrero has rejoined Flobots, the group has been working on new material, and he hopes they’ll release a few new songs by the end of the year. Guerrero was also instrumental in getting Flobots Present: Platypus on streaming services for the first time, as the EP had only been previously available on CD.

Looking back and marking fifteen years has been important to the band's members, Guerrero says. The Platypus version of “Handlebars” changed their lives, helping them land the deal with Universal Republic. The Fight With Tools version went on to become a platinum-selling single, making the band a worldwide phenomenon. While Guerrero says the original version of the song was “more punk rock and a little faster,” the major-label version was more polished and orchestral.

For years, because of the terms of the initial deal with Republic, the band was only allowed to sell physical copies of Platypus and couldn’t release it digitally after Fight With Tools came out in 2007. Guerrero says he’s also working with Republic to create a limited-edition vinyl reprint of Fight With Tools and working with DJ Shadow to release his remix of “Handlebars.”

Although “Handlebars” has been out for fifteen years, the song’s message still resonates.

“I think it's ultimately about people's power and the decisions they make,” Guerrero says. “The reason that song works so well is because it's a story, and the protagonist isn't necessarily good. I think people can relate with it, because it's like we have all these choices and we start off a certain way.”

In the lyrics of “Handlebars,” there are mentions of vaccinations, assassinations and the planet ending in a holocaust, though Guerrero says Laurie more recently wrote an alternate third verse of the song where it asks the question, “What if we saved the planet from a holocaust?”

As far as the new material goes, Guerrero says Flobots is pushing boundaries and trying to do something different while staying true to a politically conscious message.

“We're trying to say important stuff,” Guerrero says. “We have to be unique and keep those organic elements, but also update the production a little bit so it speaks to more people. I think we're trying to kind of find that line by being authentically us. I think as long as we feel like whatever the song sounds like, as long as they're good and they have some meaning behind it, whether that's emotional or political or whatever that may be, we just want to write good songs and be able to connect with our fans and get to that new next phase of the band.”

Flobots plays an election night show at 7 p.m. on Tuesday, November 3, at the Oriental Theater, 4335 West 44th Avenue. Tickets are $40 to $200. For more information, go to the Oriental Theater website.
KEEP WESTWORD FREE... Since we started Westword, it has been defined as the free, independent voice of Denver, and we'd like to keep it that way. With local media under siege, it's more important than ever for us to rally support behind funding our local journalism. You can help by participating in our "I Support" program, allowing us to keep offering readers access to our incisive coverage of local news, food and culture with no paywalls.
Make a one-time donation today for as little as $1.