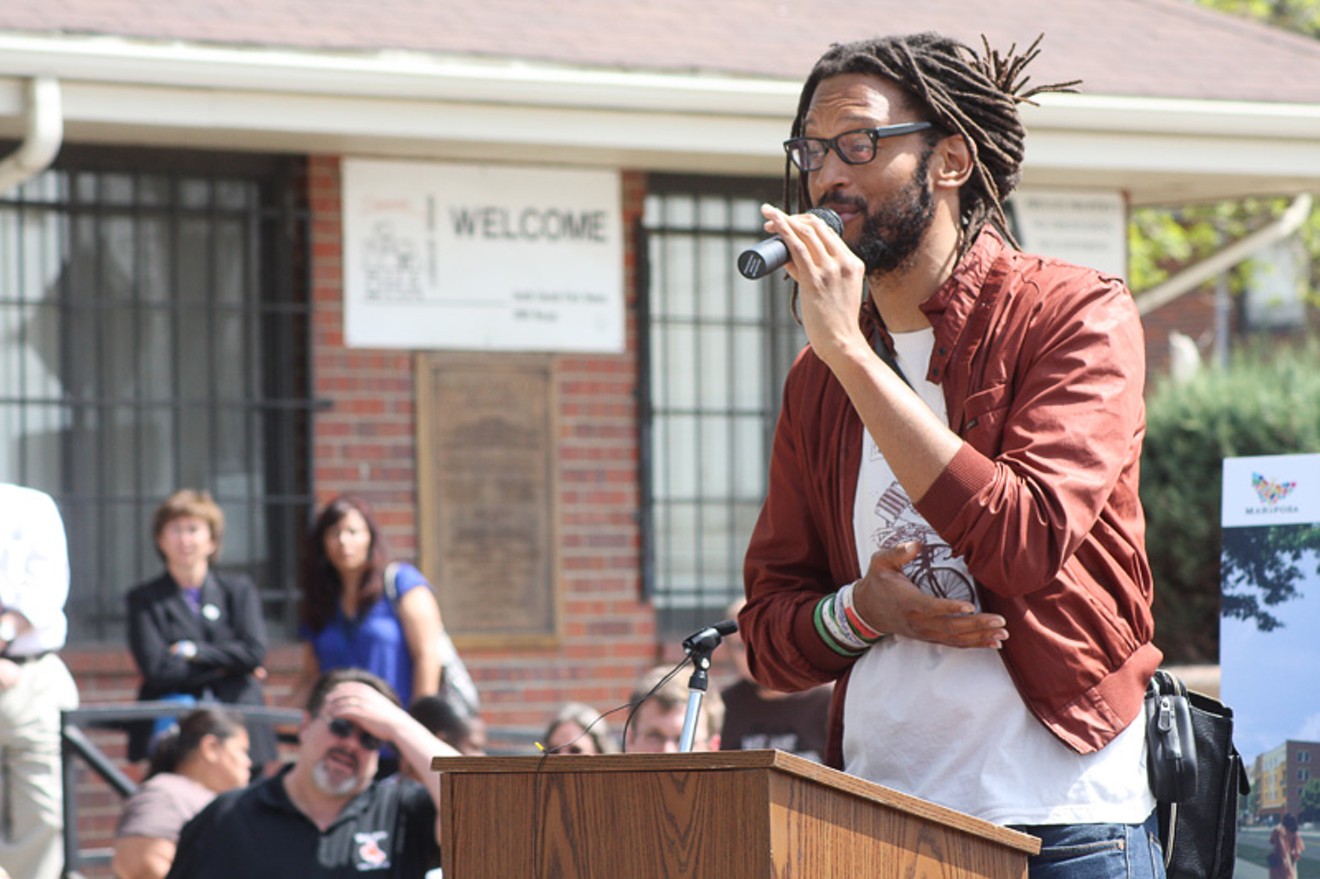 The event was originally scheduled for mid-March, but COVID-19 closures shut down that plan, and the announcement was postponed. Nonetheless, Brackett has already been busy at work, leading music-education workshops in person and developing a statewide virtual curriculum.

More than half a year after he assumed the post — with live music all but shut down by the pandemic, a majority of venues facing closure, and music-education programs long slashed by budget cuts — Brackett’s ingenuity as music ambassador is definitely being put to the test.

During the announcement ceremony, Polis noted the gravity of this particular appointment, at a time when the state's cultural industries are suffering.

Between April 1 and July 31, Colorado's music industry lost 51 percent of its workforce, according to a Denver Arts & Venues report. That's around 8,327 jobs. Denver alone had lost more than $1.4 billion in revenue from its creative economy during those months.

"It’s really going to be this ambassador that will be the ambassador during the time period of our recovery for our artists, for our musicians," said Polis, noting that Brackett will face particular challenges because of the pandemic. "The next few months are going to be hard, but thankfully this is going to be a two-year post. ... There is so much pent-up support and appreciation for our artists and a pent-up desire to enjoy our culture. I’m excited our next ambassador will get to oversee a time of great growth."

Polis also used the announcement as a chance to plug the bipartisan Save Our Stages bill and the RESTART Act, federal legislation that, if passed, would bring much-needed relief to the independent live-music industry, which is on the brink of extinction because of closures and reduced capacity.

According to a study from the National Independent Venue Association, more than 90 percent of independent bars, clubs and theaters offering live entertainment fear being forced to close by year's end if they do not receive emergency federal relief. Denver has already seen venues from 3 Kings Tavern to Live @ Jack's shutter for good.

But music, as Brackett explained, is more than an industry or economy; it's how people understand their emotions and experiences. And he hopes to use his post to bring the state together through song.

"What are the songs of survival and hope in this state? What are the songs people are singing in Joes, Colorado? Who are the people singing in Fort Collins? What is bringing people together?" he asked. "As ambassador, I’m going to try to do my best to uplift and uphold all these different songs and people making music, so in this new industry — or lack of industry — we find ways to keep music around."

The music ambassador position is relatively new to Colorado. It was introduced in 2017, under then-Governor John Hickenlooper. The first to fulfill the role was DeVotchKa drummer Shawn King, who invented the position along with heavyweight Fort Collins music funder the Bohemian Foundation and the state’s cultural agency, Colorado Creative Industries.

During his term, King used the position to build bridges between brands using music in ads and local artists who didn't know how to get their music licensed. As a result, musicians secured contracts and business they otherwise might never have had. Along the way, King led workshops for musicians about licensing songs for movies, the business of being an artist, staying healthy while touring and more.

“I wrapped it all up with a presentation at the Music District up in Fort Collins,” recalls King. “It had some clickbait title: Ten Ways to Improve Your Music. It was me synthesizing everything I had already talked about, what people need to think about to make the scene better. ... It’s been pretty amazing.”

During his tenure, King started collaborating with Youth on Record, even hosting the nonprofit’s podcast, My Youth on Record. There he deepened his relationship with Brackett.

When it came time to figure out who would be the next music ambassador, the Flobots member was an obvious pick. He's been using music for social change for years.

In 2008, the Flobots musicians found themselves on Top 40 radio stations nationwide, thanks to their song “Handlebars.” While sudden fame might have lured other artists in different directions, Brackett and co-MC Jamie Laurie doubled down on their efforts to organize youth in Colorado, launching the nonprofit Flobots.org.

More than a decade later, the organization, now called Youth on Record, has become one of the state’s most effective music-education nonprofits — and it’s not for lack of competition. The group employs some of the city’s top musicians to lead workshops to help youth build real-world music-industry skills, while also developing a deep awareness of social-justice issues.

The project has kept hundreds of young people who were tempted to drop out of high school engaged with their education while also exploring careers in the music industry. Graduates of the program have gone on to form bands, book venues and support Denver's development as a music city.

In part, Brackett plans to take that work and expand it around the state. He looks forward to collaborating with groups like Take Note Colorado, Hickenlooper’s initiative to get an instrument in the hands of every K-12 student in Colorado, and Colorado Creative Industries to improve the state’s music education.

In a time of political divisiveness, Brackett sees that statewide work as more important than ever.

“We have to go against some of these narratives of division," he told Westword in March. “The urban-rural divide needs to fall.”

He wants to empower young people to speak their minds and amplify their voices. It’s their future that he spends his life fighting for. It's their perspective that matters, he says. And at the ceremony, two of the young artists who have worked with Youth on Record, JuiceBox of Paradise and Jelie, performed a song called "Black Is Beautiful," a joyful call for unity and community pride.

“When you teach young people how to make their own music, you are giving them a microphone to declare their own world,” Brackett said. "Do it well, so we can’t help but listen.”
KEEP WESTWORD FREE... Since we started Westword, it has been defined as the free, independent voice of Denver, and we'd like to keep it that way. With local media under siege, it's more important than ever for us to rally support behind funding our local journalism. You can help by participating in our "I Support" program, allowing us to keep offering readers access to our incisive coverage of local news, food and culture with no paywalls.
Make a one-time donation today for as little as $1.