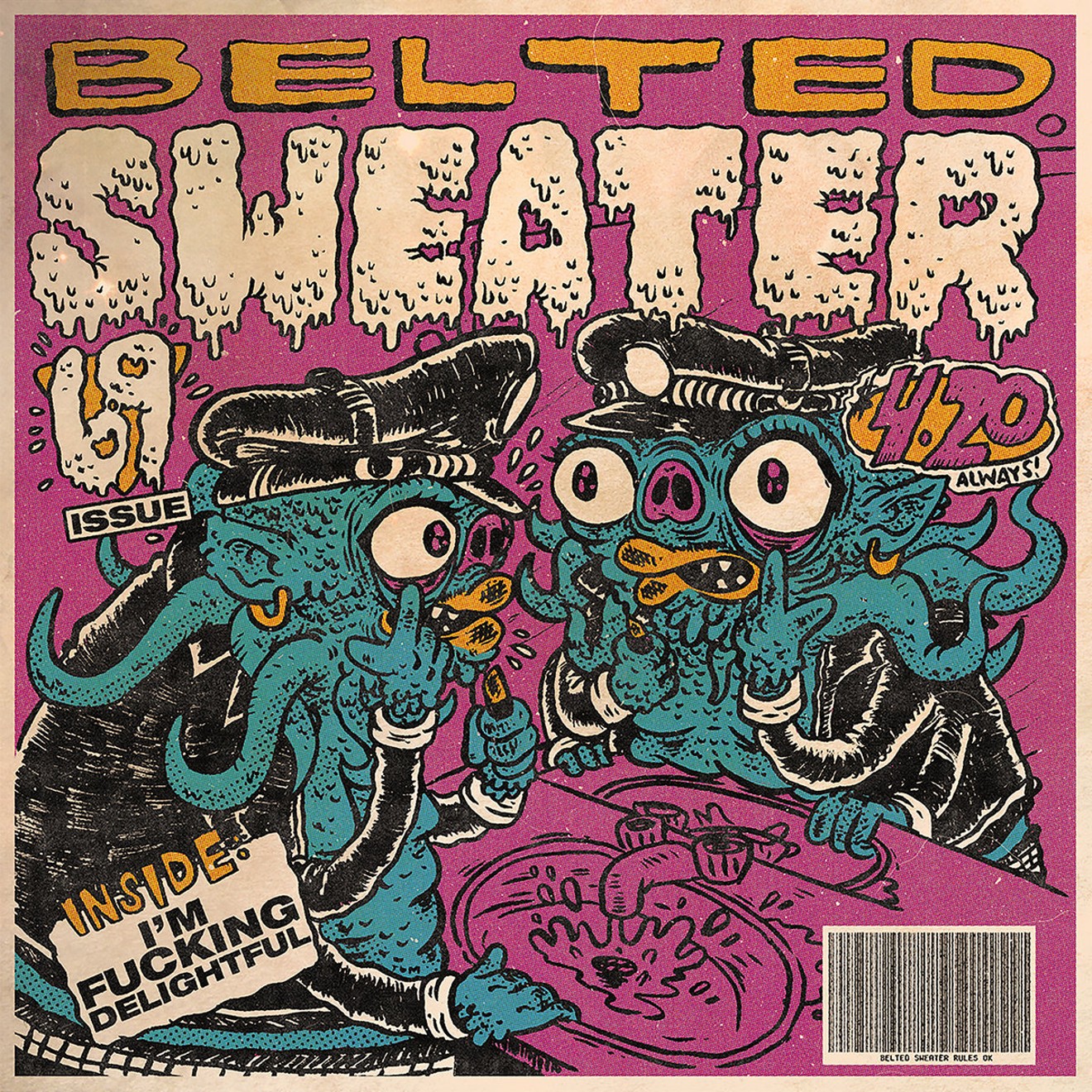 Courtesy Chris Gregory
Chris Gregory, a California musician who has drummed for a ton of math rock, metal, punk and synth bands in Los Angeles, was feeling kind of down. He had recently broken up with his boyfriend and had embarked on a series of awkward Grindr hookups because, as it's been said, “The only way to get over someone is to get under someone.”

Gregory has committed these anonymous rendezvous to posterity with his solo project, Belted Sweater, and his debut full-length album, I’m Fucking Delightful. He says some of the ideas he’s applied to the project — a mix of synth pop, screamed vocals and live drums — have been kicking around in his head for years. Until now, they had no home.

“I would come up with ideas that didn’t fit the other bands and wouldn’t work,” he says. “A lot of them were math rock or metal bands. If I said, ‘Let’s add a poppy synth line to this,’ they would say, ‘What are you talking about?’”


Gregory describes Belted Sweater — named after a song by experimental instrumental band Don Caballero — as Converge vocalist Jacob Bannon singing in darkwave synth band Boy Harsher, or Henry Rollins in Pet Shop Boys, but with gayer lyrics and live drums. He shifts these descriptions around depending on the day; he also finds notes of New Order in his music.

Gregory finds the style he has employed in Belted Sweater to be unique, in part because he uses live drums instead of drum machines, like most synth-oriented bands.

Chris Gregory, who performs as Belted Sweater.
Beto Lozano
“Everyone uses drum machines and plays guitar over it,” he says. “No one does it the other way around.”

For the record, his debut has no guitar, just synths, drums and yelling — though he plans to employ guitar on future recordings. But live drums are definitely a novel approach. He has another album in the works and plans to release at least one EP of cover songs and probably more.

He says the instrumentals pre-date the vocals on I’m Fucking Delightful — a name chosen solely to annoy suburban parents — and he decided to focus on awkward Grindr hookups as a thematic arc. He adds that Grindr can be awkward because it’s basically designed for people to meet strangers, exchange a few pleasantries and then hook up.

That’s not necessarily a bad thing.

“The anonymity is kind of the point, especially post-breakup,” he says. “You just do what you need to do with as little communication as possible. It can be freeing, without any emotional attachments. That’s kind of how I processed the breakup, was through those encounters.”

According to Gregory, his follow-up album has a poppier bent than his debut. The subject matter is a little angry and abstract — it was written during the pandemic — and includes topics such as income inequality in the LGBTQ community, which he says is an issue. Although he's a gay man and writes from that perspective, he doesn’t see his output as strictly gay music for gay people.

Gregory says that gay men are a distinct minority in Los Angeles’s heavy-music scene, but he’s found it to be mostly welcoming and accepting. He has never had to worry about getting beaten up or spit on or anything like that.

“It’s not representative,” he says. “It’s mostly straight dudes we play with, straight people, straight bands. They are certainly welcoming to gay folks, but there are not a lot of gay members. They're welcoming, but you're still on the outside.”

He adds that many of the bands he’s played in have a nerdy edge — for example, people who play Dungeons & Dragons and Magic: the Gathering — so there isn’t a lot of room for homophobia. At least that’s been his experience.

“All the cards are scantily clad he-man types,” he says. “There’s also Manowar album covers that have greased-up dudes in loincloths fighting a dragon. How can you be homophobic if that’s how you spend your time?”

Belted Sweater performs a free show at 1 p.m. Sunday, October 31, outside Wax Trax Records, 638 East 13th Avenue. I’m Fucking Delightful is available at bandcamp.com.
KEEP WESTWORD FREE... Since we started Westword, it has been defined as the free, independent voice of Denver, and we'd like to keep it that way. With local media under siege, it's more important than ever for us to rally support behind funding our local journalism. You can help by participating in our "I Support" program, allowing us to keep offering readers access to our incisive coverage of local news, food and culture with no paywalls.
Make a one-time donation today for as little as $1.