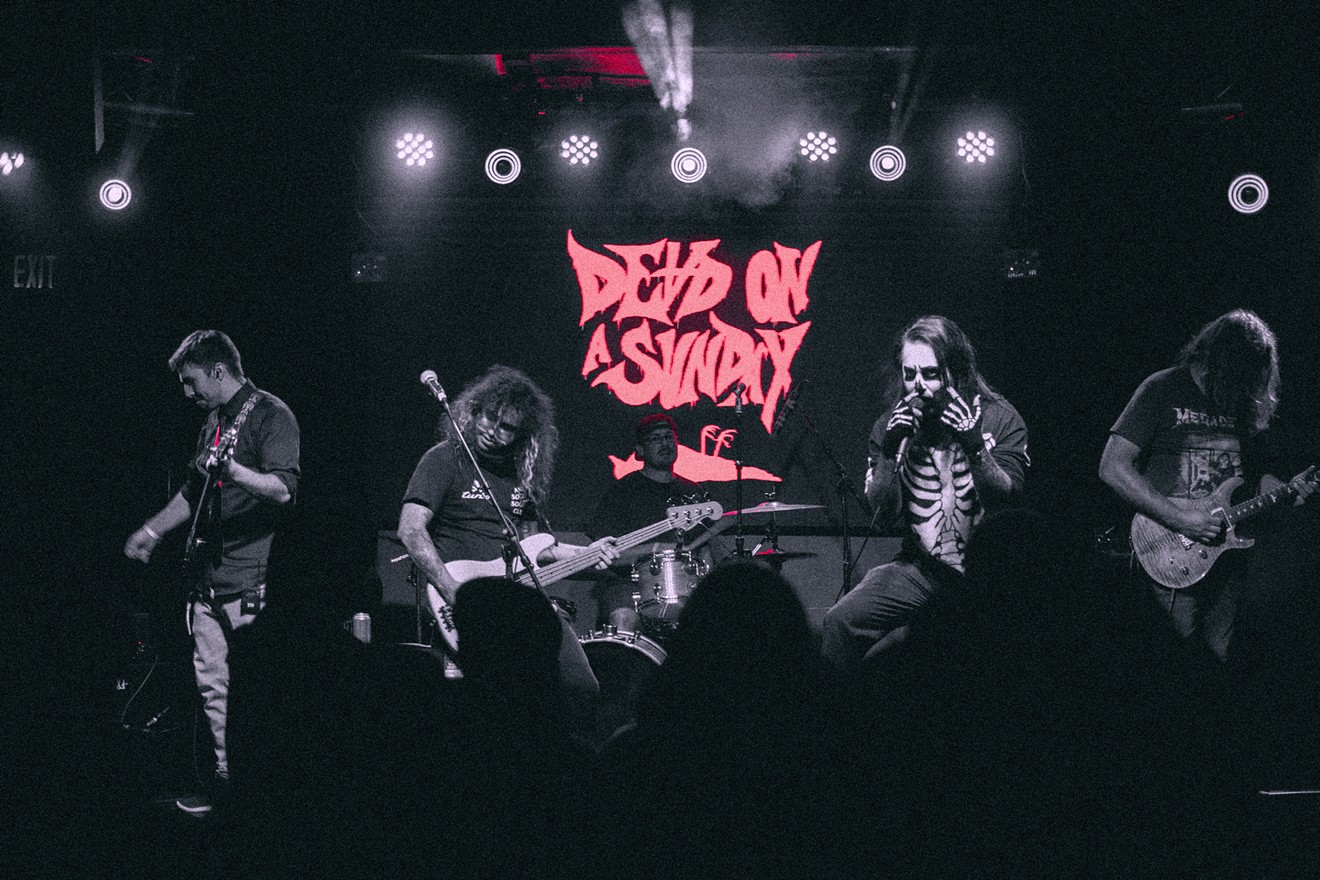 Ross Ryan's band Dead on a Sunday plays darkwave covers. Courtesy Ross Ryan
Ross Ryan created Dead on a Sunday because he had always wanted to sing in a rock band. But he didn't realize that his voice sounds a lot like that of Bob Belcher, the lead character on the popular cartoon show Bob's Burgers. The people who caught a Dead on a Sunday TikTok noticed, though, and Ryan's music went viral, with even the supervising director of Bob's Burgers eventually weighing in.

"I started messing around with the TikTok thing, like, summer 2021. And you know, TikTok either goes fast or it goes slow. So it was going really slow, and I kind of backed off it a bit, mostly out of frustration," Ryan recalls. "And then this last summer, I decided to kind of go hard at it again, because you know, it's the number-one entertainment app, and it's the only place that's really breaking artists."

He began making videos in which he re-created a popular song in the dark-wave genre, which is also the styling of his band. In one, he combined Mr. Kitty's viral tune "After Dark" with the lyrics from Blink-182's "Dammit," and then uploaded the band's performance to TikTok in October. It "was growing slowly on Spotify, maybe 100 plays a day," he says. "Then this guy on TikTok comments on the video and says, 'It sounds like Bob Belcher.' I was like, 'Is that supposed to be a good thing?' I wasn't mad; it was funny. I didn't have a video to post that day, so I just took a lot of clips of us playing our last show and I tagged that comment and wrote 'Bob-core' over the video. And within just, like, seven seconds...it had hundreds of views. I went about my day, and when I went on TikTok later, it was at 3,000 views, and every time I refreshed, people were commenting. ... I've never had anything that translated into fans and streams of the music just overnight."

The video now has more than 745,000 views, and a follow-up video of Ryan dressed as Bob Belcher lip-syncing the viral audio has racked up more than 100,000. As a result, Dead on a Sunday's debut album, Strange Days, which was also released in October, has been gaining more listens and saves day after day.

Meanwhile, the song that went viral, which Ryan titled "Dammit (After Dark)," has more than 135,000 plays on Spotify. "Every listener comes back on average about five times a day and listens," Ryan says. "It's boosted and grown the fan base. All my accounts on all platforms have grown."

Ryan didn't just gain fans; he also got a stamp of approval from the supervising director of Bob's Burgers, who posted a video of the animated character, illustrated to look like Ryan in the original video, singing the song. Ryan's re-post of the video has topped a whopping 2 million views.

TikTok has become one of the only platforms where artists can find fame without the marketing team that comes with major labels, Ryan notes. "The thing about what I do and the way I've gone about it on TikTok," he says, "is I found out that in this day and age, the best thing you can do is to go niche. Instead of trying to spread a super-wide net, it's better to just attract a niche audience and grow it from there, as opposed to just getting super-wide right away. I think that it shows to me and independent artists the power of a platform, and just growing any type of project, whether it's rock, pop or whatever.

"Labels can't blow up an artist with money anymore. ... [Artists] can do it on their own," he adds. "It's just a different world."

Ryan would know: He's spent the majority of his forty years playing music. "I was born and raised in Loveland; I moved to Denver in 2008. I've been on the Denver scene, and in various rock bands from the early 2000s," he says. "I've been in multiple bands. I've toured with Jane's Addiction. I love rock. I've always loved playing in a band with people on stage. It's hard when you're in a band and then you go be a solo artist like a DJ, and you're out there playing these festivals, and you're just like, 'I'm not doing much — I'm mixing a song into another song.' I'm not taking away from that — I'm just saying that it's not like playing guitar in rock bands. I could never get that feeling, and I wanted to get that feeling back. And I get bored easily, and I felt like the innovation in electronic music had left years ago. I felt like the innovation was starting to move back into alternative and pop and rock and things of the older generation."

He started his bass project, StayLoose, in 2013, which signed to Republic Records in 2016 and then Steve Aoki's label, Dim Mak, in 2018. "I've done multiple remixes for large acts," he says, "and I have a song called 'Sociopath,' which is kind of the cream of the crop from stuff I've done. It's the most popular, and has had over 3 million streams across Internet platforms. It's what keeps the lights on in my house."

But Dead on a Sunday remains Ryan's passion project, as well as a tie to his punk roots...and TikTok. Watch for more "Bob-core" to come.

Follow @DeadonaSunday on TikTok, Instagram, Twitter and Facebook for concert and music announcements.
KEEP WESTWORD FREE... Since we started Westword, it has been defined as the free, independent voice of Denver, and we'd like to keep it that way. With local media under siege, it's more important than ever for us to rally support behind funding our local journalism. You can help by participating in our "I Support" program, allowing us to keep offering readers access to our incisive coverage of local news, food and culture with no paywalls.
Make a one-time donation today for as little as $1.
Emily Ferguson is Westword's Culture Editor, covering Denver's flourishing arts and music scene. Before landing this position, she worked as an editor at local and national political publications and held some odd jobs suited to her odd personality, including selling grilled cheese sandwiches at music festivals and performing with fire. Emily also writes on the arts for the Wall Street Journal and is an oil painter in her free time.
Contact: Emily Ferguson