"Chaotic Ball of Energy": Why IDLES Is the Best for Post-Punk 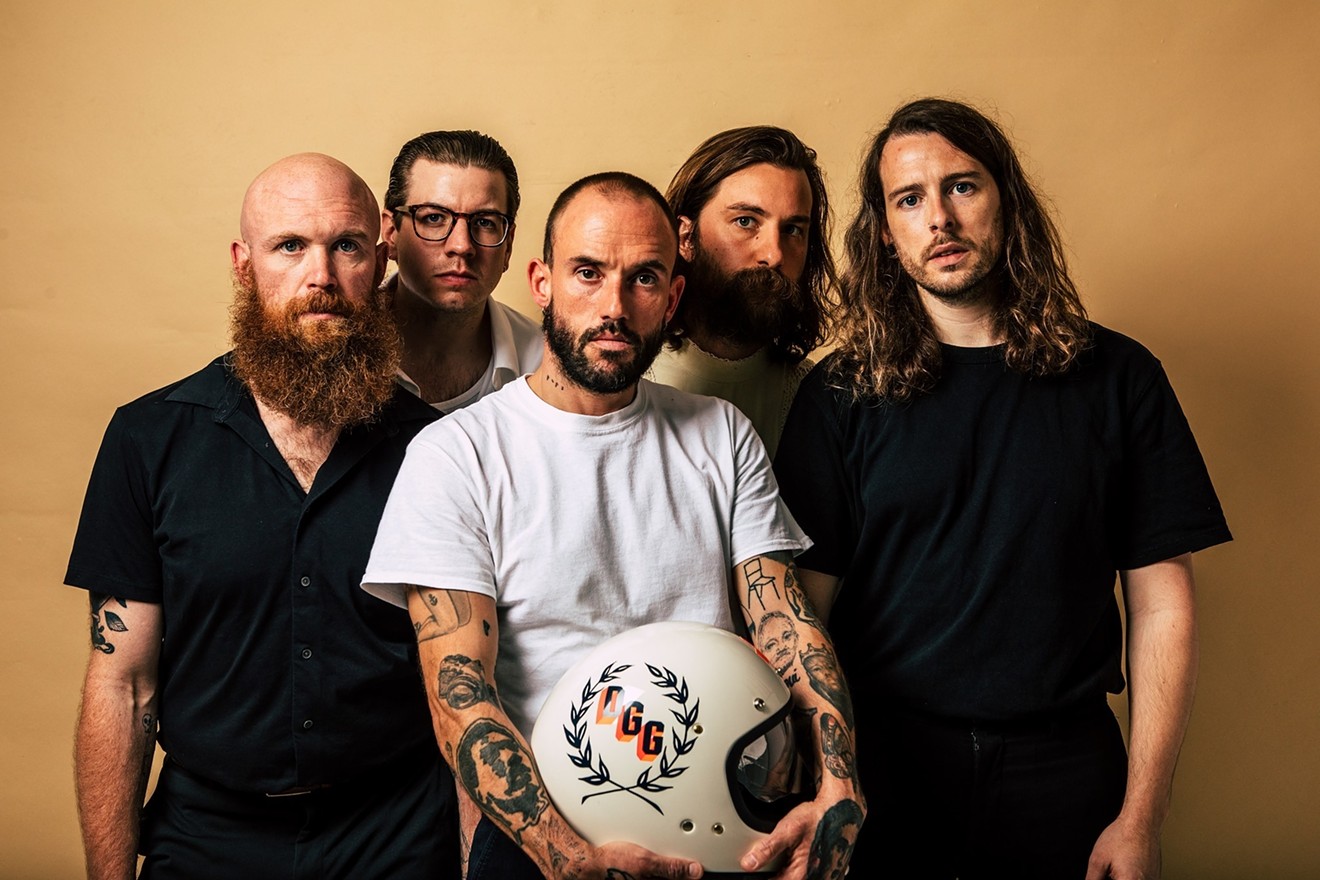 IDLES, the British-Irish band that marches to the beat of their own drum, isn’t worried about labels or genres. Tom Ham
Mark Bowen, the spastic guitarist of British-Irish band IDLES, takes a moment to consider his words before describing the band’s live shows.

“Violent. Joyous. Chaotic and cathartic. Uninhibited, but considered,” he says. Witness it for yourself on Tuesday, April 19, at Denver’s Mission Ballroom. You can’t say you weren’t warned.

IDLES's shows have become somewhat infamous in the U.K. since the band started in 2009. Now that it has more of an international fan base, the raucous five-piece is spreading the love, including playing Coachella this year. Some U.S. outlets have called its shows “unhinged,” which makes Bowen snicker.

“Unhinged? I can see that, especially at festivals," he says. "I like the people who aren’t expecting our show, and I guess that they see it as unhinged. I think what our show is, is there’s a lot of chaos, and we embrace that chaos and use the excitement from that chaos to create an energy. It always feels like it can fall apart at any moment, but never does. That’s where the beauty is. Our shows very much live on the exchange of energy between us and the audience. We come out guns blazing.

“It's never the same every night," he continues. "There’s always something different. We’re always putting something on that stage. Whenever we get the energy back from the audience, it creates this feedback loop that just builds and builds and builds into this really explosive event. We really become uninhibited and become this chaotic ball of energy to get that out of our energy. It’s worked so far.”

IDLES recently released Crawler, a byproduct of the pandemic that’s darker in its tone and lyrics than previous releases, Bowen says. “The nature in which we wrote songs changed out of necessity," he explains. "That led to a lot of introspection, a lot of writing on our own. A lot of Crawler was written by me on my own, or [vocalist Joe Talbot] on his own. That leads to a different outcome. There’s a lot of introspection and self-reflection, and a lot of consideration that may have not been there before.”

The band has a new approach in its return to the stage after such a long hiatus, too. “That’s transferred itself into our playing. We consider everything that we do now, and we’re all looking to improve and get better every night. We’re looking to capture what it is that makes the band exciting and what excites us about being in the band and how we can make that stronger and harder and better and faster. That’s where we’re at at the moment,” Bowen shares.

Bowen credits American audiences for embracing its manic style more so than the band initially thought they would.

“It’s strange," he muses. "U.S. crowds seem to get it more. They seem to get the loving element of it, like the catharsis and the joy element of it, rather than it being a [beats his chest and roars]. They seem to get that element more so. There’s a real joy to it, and a solidarity and unification that happens throughout it. American audiences definitely pick up on that more. ... Everyone from the fringes from [different genres] seem to converge at an IDLES show, which makes for an interesting night.”

IDLES plays Mission Ballroom, 4242 Wynkoop Street, 8 p.m. Tuesday, April 19. Tickets are $34.99-$59.95.
KEEP WESTWORD FREE... Since we started Westword, it has been defined as the free, independent voice of Denver, and we'd like to keep it that way. With local media under siege, it's more important than ever for us to rally support behind funding our local journalism. You can help by participating in our "I Support" program, allowing us to keep offering readers access to our incisive coverage of local news, food and culture with no paywalls.
Make a one-time donation today for as little as $1.