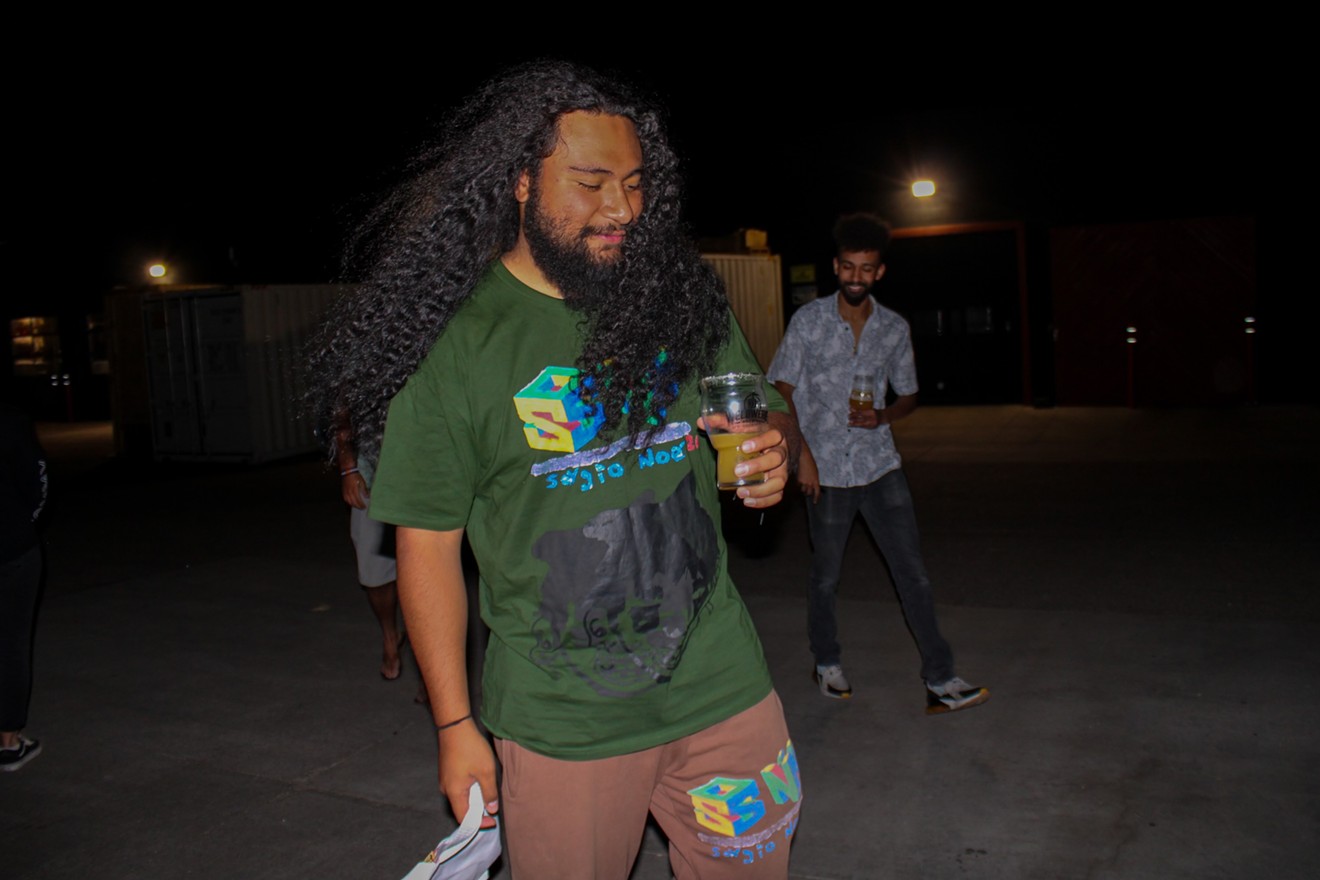 Toast to Rev. da IV on his Rev ’Round the Block TOAST Tour. Tayz Enriquez
Greeley hip-hop artist Rev. da IV (born Havea “Harvey” Tukutau) has had a summer of milestones. In June he had his largest show yet — at the Greeley Stampede, opening for rap legends Chingy and the Ying Yang Twins. He followed that up with three more shows in August, and kicked off September with his first performance in California (his second-ever out-of-state gig). "I feel like I've built up a lot of momentum by doing a lot of shows locally, and I felt that I needed to capitalize on that as soon as possible," he says.

While Tukutau was concentrating on shows, his family and friends were begging him to release new music; it had been two years since his 2020 debut EP, Oh Yawp!, dropped. He responded to the requests by releasing a cheeky new single, “TOAST,” which includes Atlanta rapper D1 Drex, on August 31. 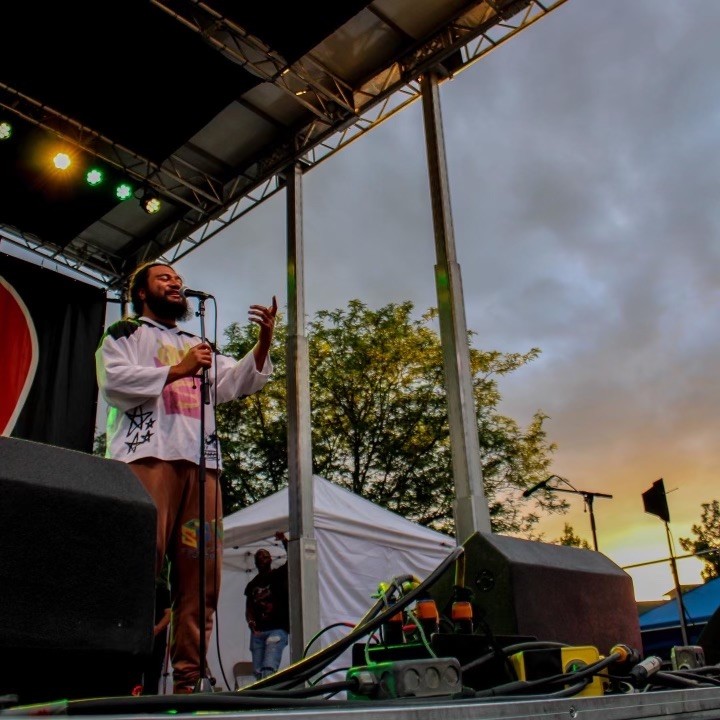 Tukutau on stage at the Greeley Stampede.
Tayz Enriquez
"'TOAST' is a complete troll," Tukutau says with a mischievous grin. "So the hook goes, 'Toast for a new release, re-please, why y'all so needy?' and when I wrote it, I put 're-please' in quotes because I kept hearing people say, 'Please drop some new music, please drop this.' Like, why are y'all so needy? And the last line of the hook is 'Play my shit on repeat.' I'm just saying, the stuff that I already have out, you should just play that on repeat! Why do you need new music?"

But he knew he was past due for some new material, admitting that he's "super glad to get this out finally." And after a summer filled with performances all around Colorado, he wanted to strike while the iron was hot.

Originally, Tukutau planned to reintroduce himself with a different track, "Still Me," but focused instead on "TOAST" because it addresses his absence. “I decided to switch it up because 'TOAST' — I just felt like it was perfect. The song was pretty much already done; I just needed to get the master. And with the whole concept of, 'All right, motherfuckers, toast for a new release,' it just made sense," he explains.

Greeley brewery WeldWerks Brewing became Tukutau's first sponsor in June.
Tayz Enriquez
One reason that Tukutau has been slow to release new music is that he's been waiting to secure the time, resources and industry connections to properly promote it. His patience has begun to pay off.

"Early Rising, a big Spotify playlist I've been following for three years, is putting me on their playlist now. Just to be able to get on that is super dope to me," he says. He also made his radio debut on Indie 102.3 earlier this summer, thanks to a guest verse on Schama Noel's pop-rap hit "Bumblebees." Impressed with Tukutau's vocals, the station will add "TOAST" to its on-air roster soon.

Tukutau spent the last few months brainstorming creative and unusual ways to boost local engagement with his latest single, including posting footage from a fake press conference with his friends posing as paparazzi, dropping a short music video for an unreleased song called "Flowers," and shopping the upcoming "TOAST" music video to different film podcasts in the area.

But the single’s rollout will be marked by more than music videos and radio: Tukutau will also host the TOAST Awards, a series where he'll present awards to local artists, business owners, influencers and more, who will then give an acceptance speech of sorts. The series will be posted on his YouTube channel.

"As part of this rollout plan, I wanted to do a series of, like, red carpet-style interviews with other artists, brands, influencers, etc., in Colorado, and ask them, 'So you just won this TOAST Award. Who would you like to give flowers to, or shout out?,'" he says.

The idea for the awards came from a verse on the new single, Tukutau explains: "The second verse on 'TOAST,' I wrote that from the perspective of someone accepting an award. I went into shouting out a lot of my team, the homies, and talking about one day winning a Grammy and looking up and thanking my grandma. My parents are still on my ass about [going back to school], so I make that promise — 'Imma walk hella stages' — but they won't be graduation stages. That's kind of where the idea of the TOAST Awards came from."

Tukutau plans to film the TOAST Awards — which may or may not include giving interviewees actual pieces of toast — over the next several months. He plans to hit the University of Northern Colorado to chat with students, but in the meantime, he’s doing a “mini-tour” in Greeley, titled the “Rev ’Round the Block TOAST Tour," which will consist of four performances in one day, each showcasing another Colorado artist as a guest. Presented by Boredomfighters and WeldWerks Brewing (which became Tukutau’s first official sponsor in June), the tour is part of the rapper’s ongoing mission to foster deeper connections within the Northern Colorado hip-hop scene. To that end, attendees will be encouraged to participate in the TOAST Awards, as well.

"I feel like I used to chase the Denver scene and want to be involved,” he says. “But now I'm enjoying that I'm embracing the Greeley scene more and wanting to build with the community of Greeley instead of chasing what's going on in Denver and chasing what's outside of my control."

"When I first pitched to WeldWerks about sponsoring me, they brought up, 'What if we did something where we gave out cards for a free beer, and all that money goes to a charity?'" he recalls. "They pitched a few charities to me, and I was down for whichever, but they just felt like it was too much of a coincidence that Boredomfighters and I came along at the same time. So I handed out those cards at Stampede, and then I came back and pitched the TOAST tour to WeldWerks, and they were like, 'Let's get Boredomfighters involved with this.' They're based in Fort Collins, but they're trying to expand out to Greeley, so this will be their first event in Greeley."

In the spirit of giving back to the city that Tukutau has called home for the past six years, all of the performances are free to attend and will highlight local businesses in Greeley. The tour will take place on Friday, September 30, starting with Tukutau and fellow Greeley artist Blak Tha Map at the Blue Mug at 11 a.m. At 1:15 p.m., he'll be at Cheba Hut with 40Cat, an old friend and collaborator who now lives in Colorado Springs. The third stop, at University Liquor Store at 3:30 p.m. with Bleak Sidian, is especially meaningful for Tukutau, because the store is owned by Sidian's family. "I wanted to get them involved because it's one of the few Black-owned businesses we have in Greeley," he says. "They have a lot of love for the community, and that's a business we need to protect." Finally, all three guest artists will perform with Tukutau at WeldWerks at 6 p.m.

While he hopes the Rev ’Round the Block TOAST Tour will help his new single gain some exposure, Tukutau's priority is creating a positive environment to bring the people of Greeley together.

"The biggest thing I wanted when I pitched this tour was just to make it for the community," he emphasizes. "Obviously I want people to listen to me and the other artists, but I also just want them to pull up and be in community with each other."

For updates on the Rev ’Round the Block TOAST Tour, follow Rev. da IV on Instagram. "TOAST" is available on all streaming platforms.
KEEP WESTWORD FREE... Since we started Westword, it has been defined as the free, independent voice of Denver, and we'd like to keep it that way. With local media under siege, it's more important than ever for us to rally support behind funding our local journalism. You can help by participating in our "I Support" program, allowing us to keep offering readers access to our incisive coverage of local news, food and culture with no paywalls.
Make a one-time donation today for as little as $1.