When a Boulder Band Struggled to Get Gigs, It Launched a Nonprofit Venue 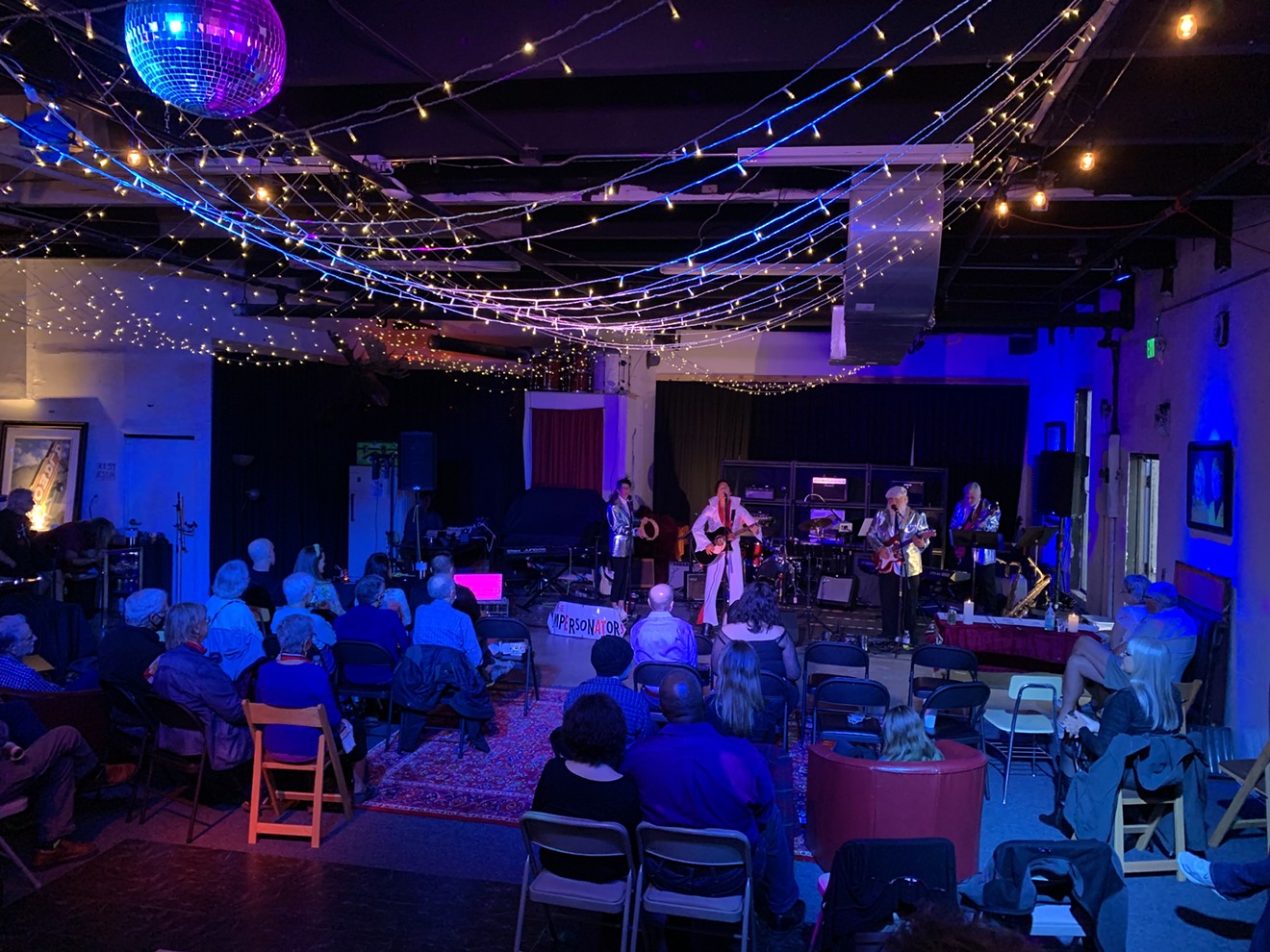 Inside a Roots Music Project concert. Roots Music Project
Dave Kennedy, founder of the Roots Music Project, is a gigging musician in a couple of acts, but he didn’t begin playing seriously until his forties. That's when his kids started going to a Boulder County band camp, and he felt the urge to pick up the music he'd screwed around with in high school.

“I had a guitar under the bed,” he recalls. “I go to pick them up, and I go, ‘I’ve got to play again.' I joined an adult band camp, and we actually formed a band and started to rehearse and play around a little bit.”

Kennedy, who now plays in the bands Stax and Rex Peoples & X Factr, as well as Motown tribute act Ain’t No Mountain High Enough, recalls feeling a bit lost regarding what to do as “an intermediate musician.” There didn’t seem to be much out there for people who weren't exactly beginners but hadn't quite hit that rock-god level, either.

So Kennedy and some friends made their own venue in the Boulder warehouse where his band practiced, and suddenly they had shows. They also had the responsibilities of booking a warm-up act, wrangling a PA system and getting people to show up. But since 2015, they’ve managed to host around a hundred concerts, using their own space and also partnering with businesses that want to have live music but don’t know how to go about it.

“What we’ve done with them is say, 'We will manage it for you,'” Kennedy says. “We'll set you up for success. We'll make sure the PA is there and find musicians and make sure all that works. Running a live-music program isn't easy for venues. … We want to help [them] develop a great business around live music.”

That desire was the beginning of what would become the Roots Music Project, a nonprofit created with the express goal of helping not only musicians, but fans and venues along the Front Range. The project is broadly geared toward Americana music, but DJs also use the warehouse space, and a string quintet will be playing a gig later this month.

The “roots” in the title reflects music that is rooted in the community and not necessarily a genre designation, says Kennedy, who sees his project as a throwback to the rich and funky 1970s music scene in Boulder and the surrounding area. He recalls an old blues club, Blues & Greens, that had a fun vibe that didn’t smack of corporate management; sadly, the space was closed and later converted into condos.

“I’ve lived in Boulder for fifteen years,” he says. “I like that Boulder, the Front Range and Denver have this eclectic reputation, but you're always worried it’s going to go away.”

The Roots Music Project is now more than a booking project; the nonprofit gives established bands a chance to get feedback from industry professionals and advice on things like how to build a fan base and run social media campaigns.

“We have our own mailing list and social media that we can leverage,” Kennedy says. “But we also get up on stage and say, ‘Hey, fans, here's how you can be a good fan.’ I always say: ‘Show up early, stay late, dance, buy merch, and support your favorite musician on social media.’”

The Roots Music Project also provides coaching to established musicians who are thinking about where to take their careers, and professional musicians who want to improve their knowledge of the music business.

“We are not like a lesson studio at all,” Kennedy explains. “But we identified that the missing piece on the Front Range is there is a lot of beginning music lessons and intermediate and band-oriented lessons, but after that, where do you go? You have to be an entrepreneur. The days of just being a good artist are over.”

The project has volunteers who will teach drums, vocals, guitar and bass; bands with a Roots Music Project-related show can come in and use the rehearsal space for a couple of hours and get feedback from a professional musician. “If you like that coach, then hire him,” Kennedy says. “And if you don’t, great. You just got two hours of free feedback, and we get a better gig. So basically, it’s a family of volunteers.”

Rick Gabler, a professional session and touring musician who was part of the 1970s Austin music scene, has called Colorado home for many years. He’s been volunteering with the Roots Music Project and offers established musicians who might have national aspirations advice on how to prepare for the shock of competition and not look like an amateur. Sometimes musicians just need someone to tell them if their band is any good and give an honest opinion.

“A lot of times, those people move to Nashville, L.A., Austin, wherever,” Gabler says. “And even though, from a talent level, they can hold their own, they don’t understand the business. Even Garth Brooks moved to Nashville and was on his way home to Oklahoma in a few weeks.”

But even if musicians stay here, he'd like to see the Roots Music Project help locals achieve their full potential.

Colorado has a deep pool of songwriting talent, Gabler notes, second only to that of Nashville, along with a major live-music scene: “When you talk about world-class songwriters like the Fray, Ryan Tedder with OneRepublic and the Lumineers, that’s just scratching the surface. We have the second-highest level of songwriting talent anywhere in the country, and it’s catching up.”

Upcoming shows at the Roots Music Project’s venue, at 4747 Pearl Street, Suite V3A, in Boulder, include a Blues/Zydeco Dance Party with the Delta Sonics at 7:30 p.m. on Saturday, July 17, which benefits the Colorado Blues Society, and a Summer Music Warehouse Party with Fresh Fruit at 7:30 p.m. on Saturday, July 24, which benefits YMCA kids fitness programs. Tickets for both events are available at rmptix.com; for more information, visit rootsmusicproject.org.
KEEP WESTWORD FREE... Since we started Westword, it has been defined as the free, independent voice of Denver, and we'd like to keep it that way. With local media under siege, it's more important than ever for us to rally support behind funding our local journalism. You can help by participating in our "I Support" program, allowing us to keep offering readers access to our incisive coverage of local news, food and culture with no paywalls.
Make a one-time donation today for as little as $1.