Dancing in the Face of Deportation

Hans Meyer of the Wild Lives Kyle Harris
I imagine it's hard to celebrate, to dance, when you're about to be kicked out of the country you're living in, where your family is, where your friends are.

Holing up and cowering would be understandable. So would giving up and wallowing in despair. Having a party – that's harder for me to imagine.

But on Sunday, September 10, children were dancing. Old folks were dancing. Parents were dancing. Undocumented immigrants, their friends and family, their supporters were dancing. And not just to one type of music, but to many: to Latin, to punk, to ska, to hip-hop – even to moody electronic music.

The party, at Lost Lake Lounge on Colfax, was a benefit for the Metro Denver Sanctuary Coalition, which helps immigrants facing deportation go into sanctuary. 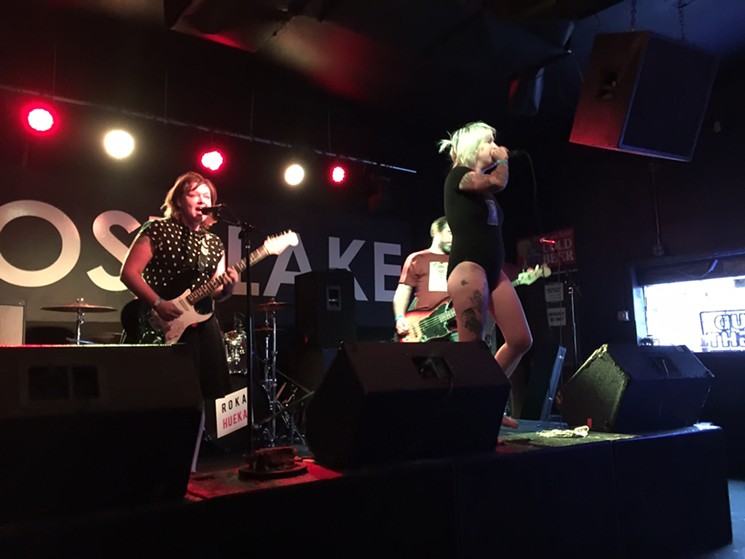 Cheap Perfume
Kyle Harris
Roka Hueka bassist Ric Urrutia dubbed the event "Territorio Libertad," a term that comes from revolutionary movements in El Salvador, where his family is from. The phrase is about taking land from the government, seizing power, oppressed people traveling wherever they please and a world without borders, without inequity.

When it comes to styles of music, the event knew no borders. The dreamy Latin rockers in Los Mocochetes opened. Molina Speaks followed, delivering a tight set of spiritual revolutionary music with his jazz-infused hip-hop act Roots Rice and Beans.

Then Wild Lives, with frontman and ace immigration attorney Hans Meyer at the helm, sang bilingual punk songs celebrating action in the streets. (For those who haven't seen him, Meyer may be better on the stage than he is in court — and he's a brilliant, brutal force in front of federal judges.)

The punks in Cheap Perfume belted out their new banger, "It's Okay (to Punch Nazis)," amid a slew of songs railing against patriarchy. The Latin ska band Roka Hueka, which organized the event, called for a united front against fascism while grinning and blasting the skanking crowd with horns.

Talk to bookers around town, and they'll say it's common wisdom to make sure that bands on a lineup play similar types of music. That way, no audience members are alienated. Rock bands play with rock bands, punk acts with punk acts, Latin bands with Latin bands, hip-hop with hip-hop and so forth. Exciting, right? Also, concerts, many bookers say, should have headliners, one band that draws the majority of the crowd, and supporting acts that build up to the main attraction. 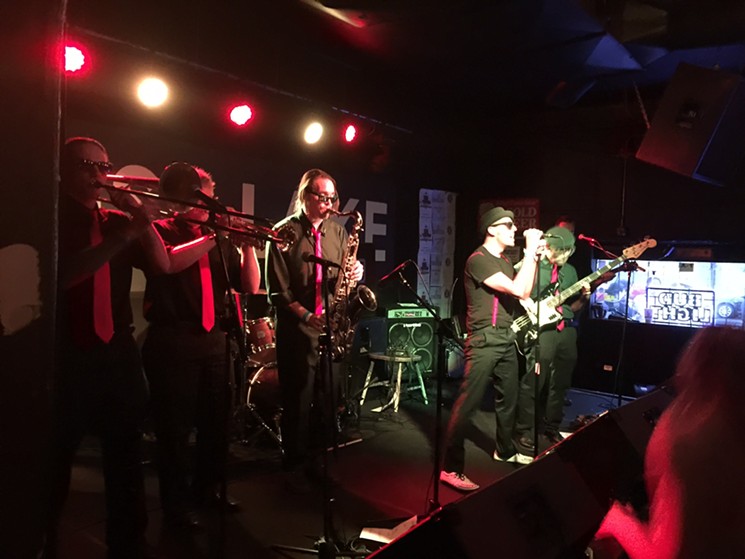 Bands rallied for the Metro Denver Sanctuary Coalition on September 10, 2017, at Lost Lake.
Kyle Harris
Not last night. The bands were all talented, all worthy as headliners. You could have put their names in a hat and drawn the order randomly, and it wouldn't have hurt a thing. There was no star power, just community power.

Throughout much of the evening, toddlers and older children danced at the front of the stage — making some of the performers with expletive-rich songs cringe. But the kids illustrated a good life philosophy: Stay open.

From what I saw last night, it works to break down the walls, to share space, to show up across community lines. Given the chance, people will dance together — even to music they might not call their own — and when they do, it's nothing short of revolutionary.