Lady Gaga's Coming. Here's What Denver Musicians Have to Say

Lady Gaga Aaron Thackery
Few pop-music figures have proven to be as divisive as Lady Gaga, who emerged in 2001 and broke into the mainstream in 2008 with her album The Fame. As one of the world's biggest pop stars, she easily bridges the gap between pre-teen idol and Coachella-friendly electro-artist, yet her naysayers swear she’s a vacuous manufactured product of an increasingly-empty industry. She has fans in high places. Liam Gallagher of Oasis once said, “She's great! Seriously, man, we like her. She's the only one out there who's got balls. She can play instruments. She can sing. She can dance. She's weird. She's shocking people. I like the Gaga, man.” Former Creem editor Bill Holdship, writing for alt-weekly the Detroit Metro Times back in 2011, penned an article called “In Defense of Gaga,” in which he eloquently pointed out her merits. “At least 15 of the tracks [on the Born This Way album] have major, hook-filled, melodic payoffs before you reach the end of the song,” Holdship wrote. “Born This Way is all over the musical map in a truly outrageous manner, as she mixes classic bubblegum hooks with heavy metal riffs, '70s disco and everything in between.”

Since Holdship’s 2011 article, there has been some shift in the perception of the word “pop,” particularly from serious music fans. There was a time when it was considered the lowest of the low, thanks in no small part to the likes of N*Sync and the Spice Girls. The 1990s was a terrible time for pop music. But this decade has seen artists like Lorde and even St. Vincent reclaim it.

Those who get Gaga understand that she’s a true artist. She started learning piano at age four, played open mics as a teenager and, in the mid-2000’s, started dabbling in avant-garde electronic dance music with performance artist Lady Starlight, blossoming in the New York underground. A slight veer in a different direction, and she could have been Peaches.

Koo Qua
Chris Morgan
Denver musicians find inspiration in Gaga. MC Koo Qua wrote to us, “I like Gaga. Very creative. I look at her as the female rock star that makes pop music. Gaga is kool in my music book.”
Local indie rocker LaRissa Vienna, of LaRissa Vienna & the Strange, says, “Upon first glimpse of a Gaga music video back in 2008, I was still a local musician in a rock band, and I was captivated. I remember watching the ‘Paparazzi’ music video and thinking probably the same thing every other musician watching was thinking: I've got to step my game up. She brought a beautiful, artistic angle to pop music that I've never seen before. I've been a die-hard fan ever since. She has changed pop culture forever, just as she intended. Every pop star in the spotlight ended up following her lead, and in my opinion, they still do to this day. She is such a light in my life, and has continued to inspire me throughout the years. She is a pioneer. I believe she is the most talented popular musician we have today. Her songwriting is brilliant, her performances are cutting edge, and she's always taking us by surprise while remaining a beautiful, kind woman who shows compassion and most of all, is living proof that hard work will get you far. In a time where most music legends have passed away or are far past their prime, I am so happy to be alive in the era where Lady Gaga is undeniably on top of the world.”

LaRissa Vienna
Courtesy of band
Thanks to John Seabrook’s excellent book The Song Machine: Inside the Hit Factory, it’s even possible to look as the likes of Katy Perry and Miley Cyrus slightly differently. Seabrook details the fact that the teams of people working behind the scenes are phenomenal songwriters, producers and musicians. View the pop star as simply the frontperson, the Dave Lee Roth, of a bigger project, and it’s easier to have a greater appreciation. After all, there are plenty of singers in rock bands who don’t write the songs or even have spectacularly great voices. And, yes, there is a team of people behind Gaga. It’s inevitable. But this is a woman who does write her own songs (or at least genuinely co-writes), who has a vision that she works with others to bring to fruition, and she can sing powerfully, play instruments and, unlike many other pop stars, takes risks. “I personally highly respect Gaga,” says Julio Perez of Denver band This Broken Beat. “I’m very inspired at her activist spirit in-and-out of her art. And to juggle acting as well speaks to me greatly. If you can be successful in all those areas, then that says so much about someone. She has inspired to me to reach outside the box and strive for more artistically.”

Julio Perez of This Broken Beat
Alex Rodriquez
"In general, I have a lot of respect for Lady Gaga, although I’m not that familiar with her music beyond what I’ve heard on the radio," says Connie Hong of local indie band Ivory Circle. "I think she is talented, and I admire how thoughtful she seems to be in her presentation. Her music alone doesn’t strike me as particularly unique, but I think she brings a strange sense of authenticity in the way she constantly reinvents herself, is weird but still accessible, talks openly about her personal struggles, and embraces her fans."

From her breathtakingly unconventional outfits to her mega stage show, Gaga takes the visual side of her art seriously. She’s vocal in her support of the LGBTQ community (which has earned her nonsensical criticism from those who say she’s exploiting them), and she was eerily excellent acting on American Horror Story: Hotel. 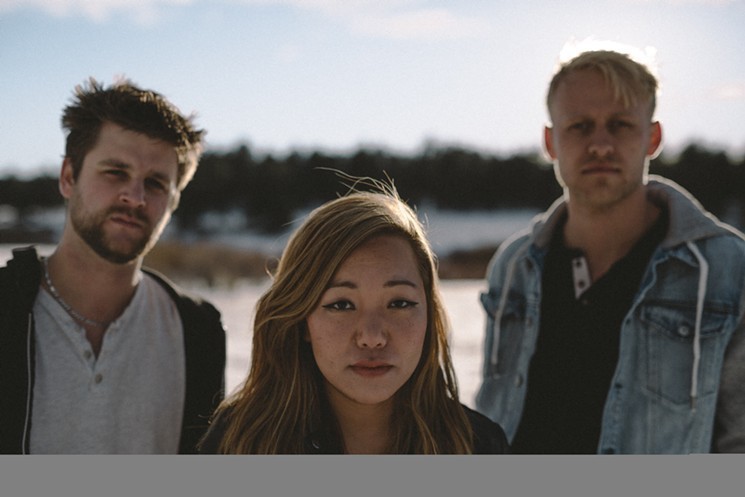 Ivory Circle
The Skullhound
Under the constraints of a watchful major label, naturally eager to make money on one of its biggest assets, Lady Gaga achieves the near-impossible by doing what she wants anyway.
She's important, standing up for what's right at a time when we need public figures to empower youth. Denver EDM artist Lea Luna went a step further: "Lady Gaga is my celebrity idol, but not specifically because of her pop effigy. Any well-groomed, privileged musician can adopt fame, fashion, sex appeal, commercial appeal, and fans. We are at a point in history where using privilege to help the underdogs is of dire importance. She used her stage to kick the door down on some major uncharted territory socially and politically. She screamed unabashedly in the face of homophobia; she has become the leading flag bearer for sex-positive feminism, especially within the music industry; she spoke for peace with the Dalai Lama; she challenged her fans to adopt self-acceptance; and she offered her coattails for the underbelly of avant-garde art that no one had the balls to acknowledge in major pop media before her. What she stands for is not the cookie-cutter pop icon, but a humanitarian that has taken the form of all the content she kills herself to render. From her documentary, to her speeches, to her performances, to her fan dedication, she shows that a stage and a following can serve much more of a purpose than arrogance."

Lea Luna
Courtesy of artist
And here’s the best thing: It works to her advantage that she still has haters. She thrives on it. That adversarial rub will generate some of her best work. And the more metal fans that get itchy when she sings with Metallica, the more indie kids mad that she’s at Coachella, the better. It’ll just drive her on. Lady Gaga, 7:30 p.m. Tuesday, December 12, Pepsi Center, 1000 Chopper Circle, 303-405-1100.